AT 1898 g. It has also become the world's first rifle, received a cartridge with a bullet ogive shape (with a pointed nose and a tapered rear portion). After making some changes to the design in 1893 g. was named Fusil Mle 1886 M93. Despite some shortcomings, until the second half of the 1930s remained a staff weapon French infantry.

AT 1884 the French chemist Paul Vieille created smokeless powder, he called Poudre B. This substance appeared three times more powerful than black powder of the same weight, and when burned practically remained smoke. Around the same time, there are rifle cartridges with a full-metal jacket bullets: they lead core is completely covered with a copper alloy. Usually, this invention is attributed to Swiss officer Edouard Ruben (Eng.). This design does not allow the pool to melt in the barrel and leave particles of lead in the rifling, so that it is possible to increase the initial speed, while they themselves do steeper rifling to increase the stability of a bullet in flight.

The Minister of War, General Boulanger France demanded the immediate combine these two inventions in the new rifle designs. He appointed General Tramona (fr.) Chairman of the Commission and gave him a one-year period. At that time, armed with the French army was breech-loading rifle Gras, and the fleet possessed rifle Kropacek (Eng.) a grenade store. Both - a 11-mm Gras cartridge with black powder.

The idea was that Boulanger, to put the army at once with single-charged rifles chambered with black powder on store smokeless, avoiding the "intermediate" options (magazine rifles chambered with black powder). Firstly, as a powerful new gunpowder allowed to go to the smaller size for better ballistics, Colonel Basil game (together with Colonel Etienne Desalo) "I compressed the" 11-mm sleeve of his patron by a bullet 8 mm. Idea grenade store took almost unchanged from the rifle Gras-Kropacek arr. 1884. Her recharge mechanism for new weapons finalized Albert Klose and Louis Verdun in Chatellerault arsenal.

Colonel Bonnet, Swiss structure being inspired Vetterli (Eng.) I created a gate with two radial lugs, arranged in front of the combat the larvae of. Head of the commission, General Boulanger suggested the idea of ​​a bullet with a flat nose - it was quite a common solution for the weapon with tubular magazine: as in this store are cartridges each other, bullet shells next to Donets, there was a danger, bullet when shock or impact can break the next cartridge cap. The practical implementation of ideas, called Balle M ("Bullet M"), implemented Colonel Nicolas Lebel (Eng.), Chief of the Army Infantry School.

Lebel called the name he created a bullet, then it passed to the whole cartridge (and 8-mm caliber), and within the Commission - in spite of the "friendly protest" of the Lebel - his name came to be called, and the entire structure. Lebel, as the head of the Infantry School, He led the army tests rifles, after which the name was already widespread (but still unofficial). He stated, that the greatest contribution to the creation of rifles made a skilled designer Colonel Gras.

AT 1887 by minor changes undergone fixing pin, and in 1893 changed the shape of the combat larvae - in the event of rupture of the liner in the chamber fiery gases do not hit in the face arrow. At the same time we strengthened the attachment of the sight, We entered the hook for setting in a pyramid, finally abandoned the fuse. Modified rifle received the designation Fusil Mle 1886 Amended 93. 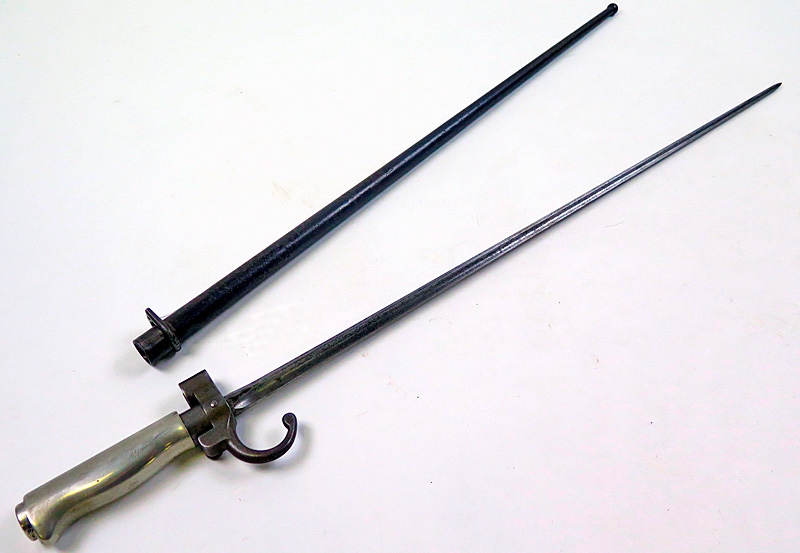 In order to store underbarrel bullet punched a sharp nose cap next cartridge, cap made with a fairly thick wall and a convex shape, and in the Donets sleeve ring groove has been made, where the bullet nose and slipped a convex capsule.

Production went on three state arms factories - in Chatellerault, Saint-Etienne and Tulle. One only arsenal in Chatellerault gave an average of 900 barrels a day. A program of complete rearmament new rifles completed in France 1889 city, production finally ceased in 1920 year.

for rifles, held the First World War, worn trunks replaced with a new way to 1930 g. 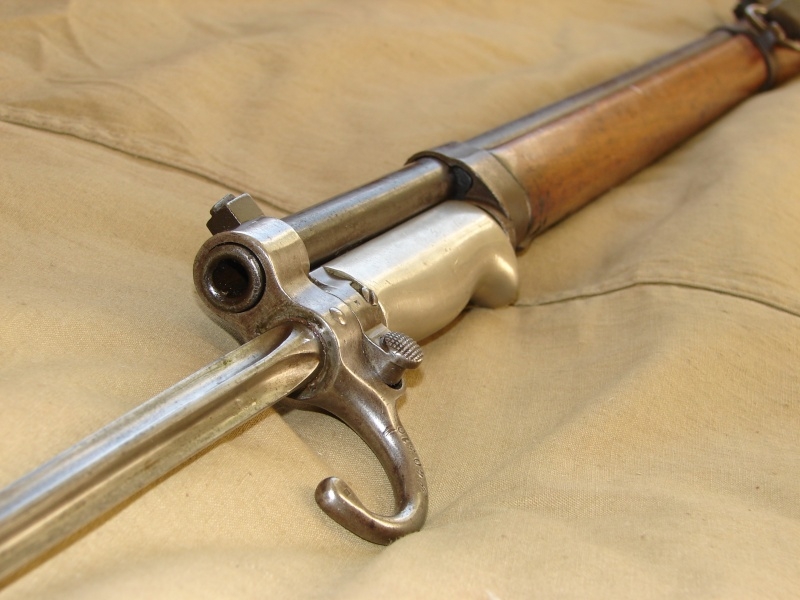 The weapon is a repeating rifle with a tubular magazine rifle integrally cast on 8 ammunition feed due to the spring. Locking the sliding bolt - due to the two lugs at the front of the combat the larvae of. In the closed position the bolt handle stem almost rests on the rear wall of the recess of the receiver, which was considered a supplementary safety measure using powerful new cartridges.

Barrel length 800 mm with four left-side rifling. Feed the next cartridge into the chamber is carried out manually with the shutter, which drives the swinging tray feeder. shop equipment - manually, one, through the window of the receiver. General rifle capacity can be increased up to ten rounds: but eight in the store, another can be manually put on a tray feeder, and another - to invest in the chamber.

The safety device in the first model was presented to the rotary hammer (A similar system was used in the Mosin rifle). In the model, 1893 year from the fuse refused to do, since march rifle still carries a loaded magazine, but empty cartridge chamber.

On the right side of the receiver is set cut-off store. In the "switched" position, it prevents the supply of cartridges, turning in a single-shot rifle. anticipated, what's in store cartridges shooter must save at a critical moment in the battle, and before that to charge the weapon "old-fashioned" hand. These devices were equipped with rifles, many of the time. However, to determine the onset of a "critical moment" is not easy, and because the cut-off rather quickly out of use.

The tubular barrel-attached shop is the focus of both the benefits, and the disadvantages rifles: one side, This design allowed for a compact rifle with great capacity - almost twice as much, than most models of its time; with another, the store had to manually dozaryazhat, one patron, and as a result of practical rate "Lebel" inferior oboymennym with rifles and even more burst loading.

Lodge rifle - wood, of two parts. Despite the unsightly appearance, Rifle was well balanced and provides quick and convenient prikladku.

The weapon is equipped with a needle tetrahedral bayonet (Sword-Bayonet Model 1886) length 52 cm (20 inches). The shape of the bayonet makes it easy to punch leather items of equipment and thick dense tissue. During the First World War, the French soldiers called this bayonet female name "Rosalie". Fighters often shortened such hostility, receiving trench knife stiletto. The bayonet was attached pretty hard: lug under the barrel was a member of the handle groove, and the guard ring was put on the barrel, thus ring cutout was fixed on a broad front sight. latch button located on the bayonet on the left side under the hilt. During the war, we made simplified version bayonets - with brass handles (from German silver instead of the standard) and a modified form of the guard. AT 1916 g. sword bayonet was designed, a double-edged and slightly curved, almost half the length of a full-time. However, it is adopted and has not been adopted.

Sights consisted of an open fly and stepped sight, razmechennogo to 2000 m. Since adopting a pointed bullet “D” We set new sights, to 2400 m. If you throw a frame forward sight, opens on a fixed sight 400 m (and that used most often). Sniper rifles equipped with telescopic sights APX arr. 1916 and 1917 a threefold increase. 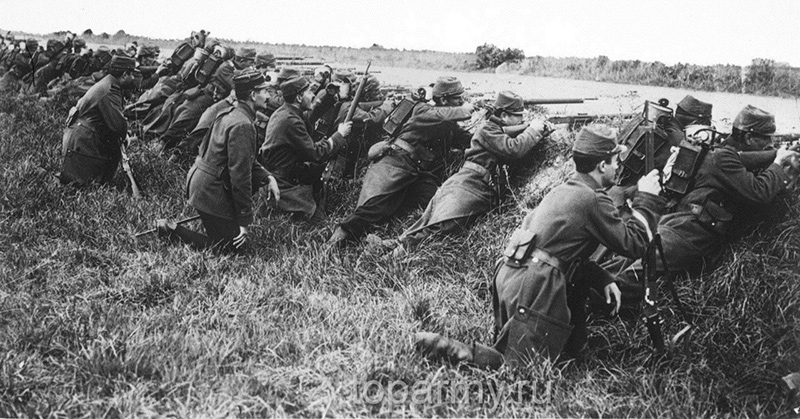 The emergence of Lebel rifles forced other countries to develop their own stores under the small-caliber rifle (by the standards of that time) with smokeless powder cartridge. In Germany and Austria-Hungary, such samples have been taken into service in 1888 city, in Italy and in Russia - 1891 and in the UK - in 1895.

During rifle proved itself as a very accurate weapon during World War, powerful and reliable, capable of withstanding the conditions of trench warfare. Despite all the shortcomings, "Lebel", French infantrymen clearly preferred her rifle Berthier, primarily due to a bigger store. During the war, he adopted the French army entered rifle grenade type VB (Live-Bessieres) Countdown. 1916 of the year, Shot from which is produced by a blank cartridge.

After, as "Lebel" armed infantry Metropolis, "Berthier," sent to the colonial troops and the Foreign Legion. However, the experience of war legionaries demanded rearm them to "Lebel", which was mainly carried out in the 1920s, (but armed with some units of the Foreign Legion rifle remained even after the end of World War II). 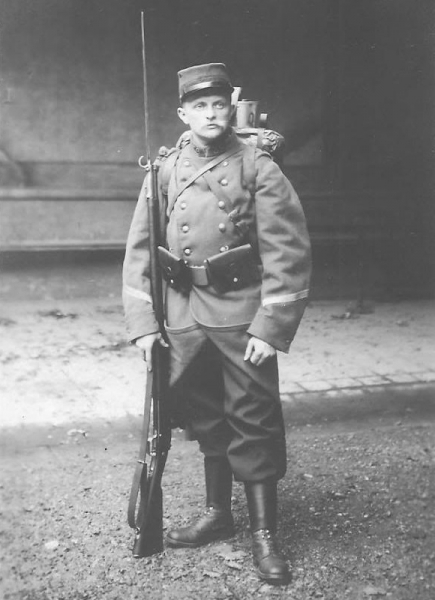 After the war, the need to modernize the rifle and cartridge was obvious; however difficult - politically and economically - the postwar period in France did not allow fully implement these plans. MAS-36 Sample a new rifle was ready in 1929 year, but only in 1936, it officially accepted into service until the beginning of the war did not have time to re-equip all the parts, so that the troops of the second line of the war met with "Lebel".

After the start of World War II, along with other weapons of foreign manufacture Lebel rifle arrived on arms of some units of the national militia (So, adopted battalion of the national militia, Kuibyshev district of Moscow, along with other weapons from the warehouses of the Moscow Military District was transferred to 168 PC. Lebel rifles, at the end 1941 Year rifle Lebel issued Tula working regiment, Moreover, each rifle was supposed to all of 5 rounds).

– in the 20s new rifle ammunition have been developed to replace the outdated cartridge Lebel, of which was eventually selected 7,5 × 54 mm. Under his 1927 g. altered a number of rifles Lebel, A key change was the new shop on-line 5 rounds. Carbine was designated Miss 1886-93-27. However, with the development of fundamentally new rifles MAS-36 rifle under this cartridge the need for rework under him "Lebel" disappeared;

– at 1935 g. in Tulle began remaking rifles carbines Mousqueton Miss 1886 M93-R35. They used the same cartridge Lebel and were completely identical rifle, except shortened to 450 mm barrel and, respectively, shortened grenade store, which now contains only three rounds. Carbines were intended for cavalry units in North Africa. To 1940 At about was remade 50 thousand barrels. The army is a weapon has been criticized for the extremely strong returns. 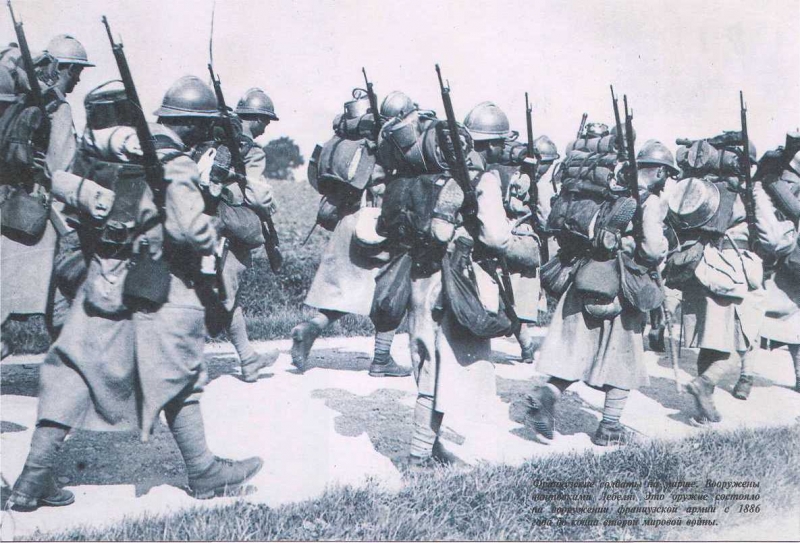 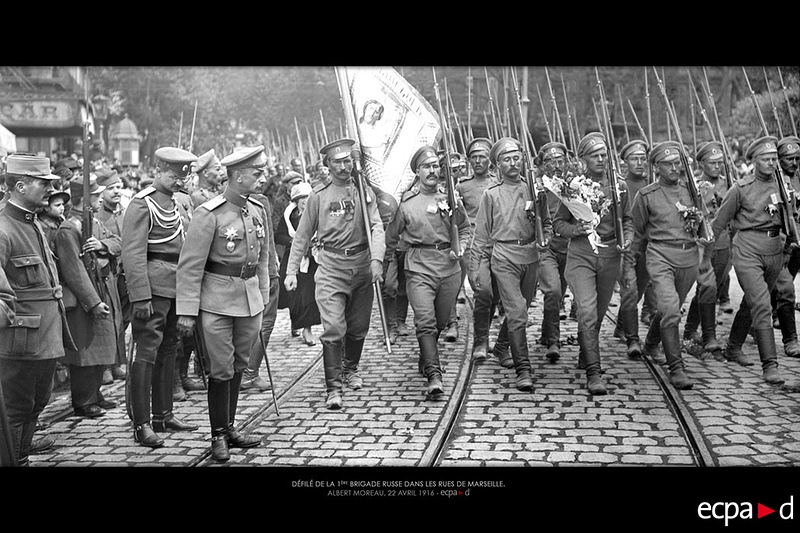