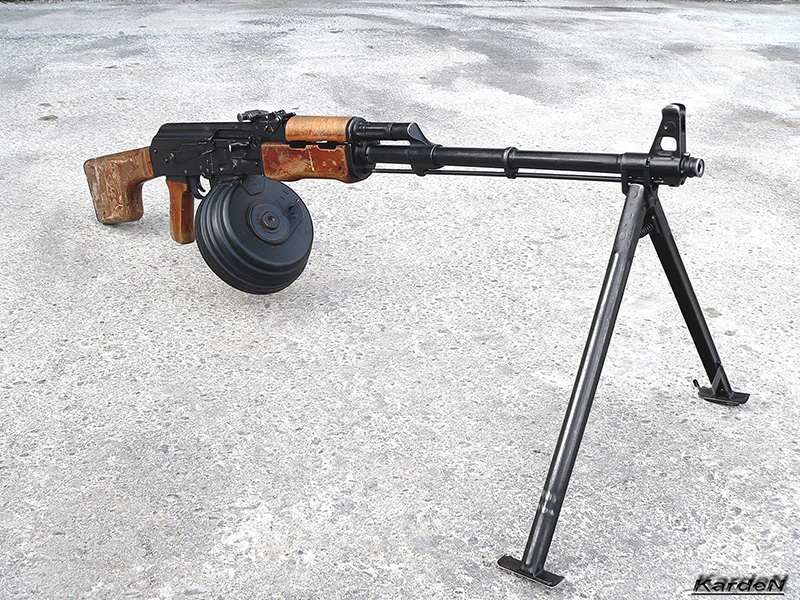 PKK 7,62 mm RPK (GRAU index - 6P2) - Soviet machine gun, created on the basis of AKM. Adopted by the Soviet Army in 1961 year. He replaced the RPD machine gun, as a more preferable in terms of commonality with other accepted into service in small arms.

The trunk of the PKK in the field can not be replaced. Power PKK possible from conventional stores caliber Kalashnikov 7,62 mm, stores high-capacity (40 rounds) any of the drum magazine (75 rounds). The sight had the opportunity to enter the side of amendments to the wind. there are options: amphibious variant with folding stock (RPKS, GRAU index - 6P8); fastened with night or riflescope (RPKN, RPKSN).

AT 1974 in connection with the transition to the cartridge 5,45 × 39 mm for service modification adopted RPK 74 corresponding caliber, however, there is a modern version of RPC-cartridge 203 under 7,62 × 39 mm. 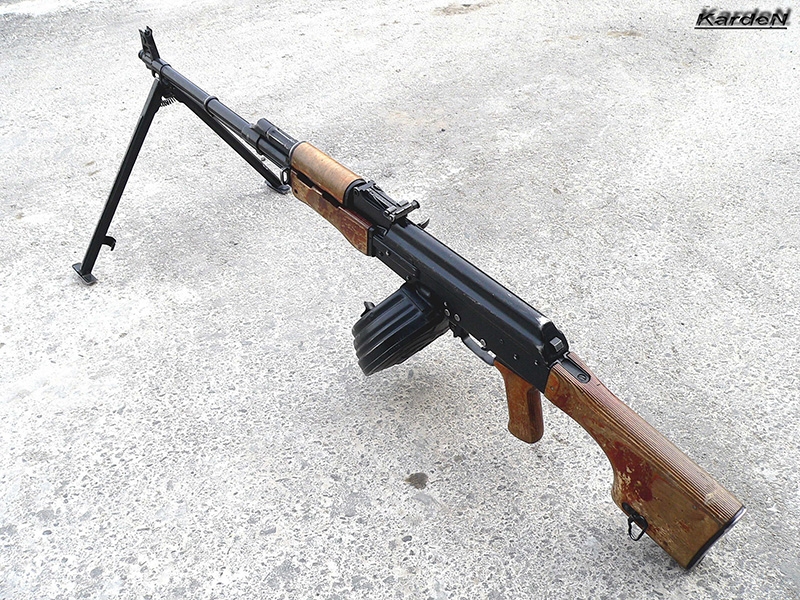 RPK machine gun was accepted for service in the armies of more than 20 nations. In some countries, made its variants or copies. for example, Yugoslavia issued machine gun "Kalashnikov" 72V1 chambered for 7.62×39, which differed Finned barrel length, and 72AV1, had metal butt. Export version of the gun 77V1 under NATO cartridge 7.62×51 It equipped with box magazine and other forms of carrying handle. Together with automata 80 80A and under the arms of the family under 5.56×45 (M193) produced machine gun model 82 having a permanent butt 82A and folding, Both models have a handle for carrying. In its turn, Yugoslav guns available in some countries - for example, Iraq was M72V1. Chinese copy of the type 73 and 81, retained the general scheme of machine gun RPK, however, have a number of differences. The Finnish company "Valmet" bought from the Soviet Union license for a Kalashnikov and 1960 g. He began to produce his licensed copy called Valmet Rk. 60. On this basis, Finland has launched her own development machine guns and sniper rifles, such as autorun Valmet M-78, It has become almost an exact copy of the Soviet RPK. 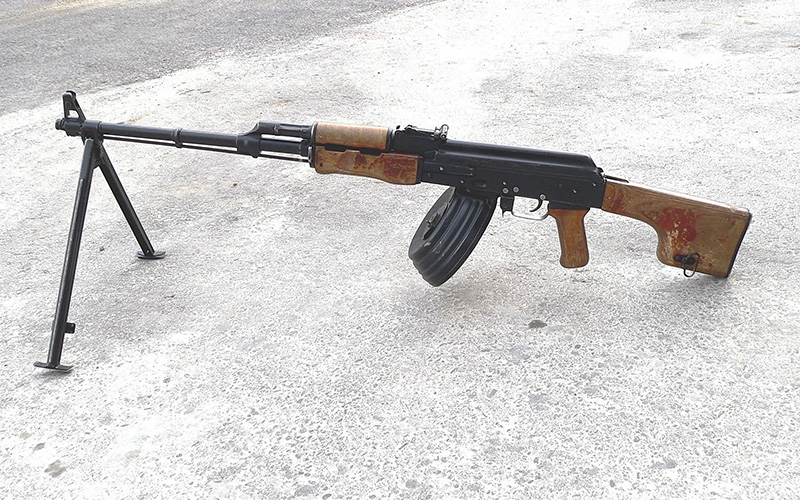 The idea of ​​unification of automatic small arms based on a single cartridge and a single system worked out in the USSR in mind the success of a single German machine gun MG-34.

In March 1953 , the Small Arms Control GAC has developed tactical and technical requirements on standardized samples of automatic weapons - new, "Light" rifle and machine gun. AT 1956 was tested "light" automatic and manual machine guns M. T. Kalashnikov, D. A. Korobov, A. FROM. Konstantinova, AT. AT. Degtyareva and D. FROM. Garanina. Machine gun was to replace the machine gun raps (sample 1944 of the year) under the same submachine sample cartridge 1943 year mechanized infantry weaponry, airborne divisions and Marine divisions. Tactical and technical requirements provided for in addition to the unconditional preservation of combat performance, reached at 7.62mm RPD, a significant reduction in labor intensity of production and mass gun.

AT 1961 It was entered into service "RPK" (PKK, 6P2 index), unified with the adopted two years earlier AKM. PKK - automatic firearms motorized infantry branch, intended for destruction of manpower and fire weapons destruction. With the replacement of the SKS carbine machine gun AKM modernized, and RPD machine gun RPK automatic weapons in the chain separating the squad was completely harmonized by the patron and the system. Wide standardization of components and parts with machine gun AKM already mastered much simplified production PKK, his study of the troops (especially, that the system of AK - one of the easiest to learn and master), machine gun provided reliable operation base sample. Equally important is the ease of disassembly, maintenance and repair. Scheme RPK device similar machine AKM, most of their units and parts are interchangeable - Regularly check the identity of the components provides a broad maintainability weapons in military workshops and arsenals of military districts. true, for the production of the unification of the machine with a machine gun had a downside - survivability requirements of parts unified family defines the requirements for survivability to the machine gun. Manufacturer PKK became Vyatskiye Polyansky Machine-Building Plant "Molot". 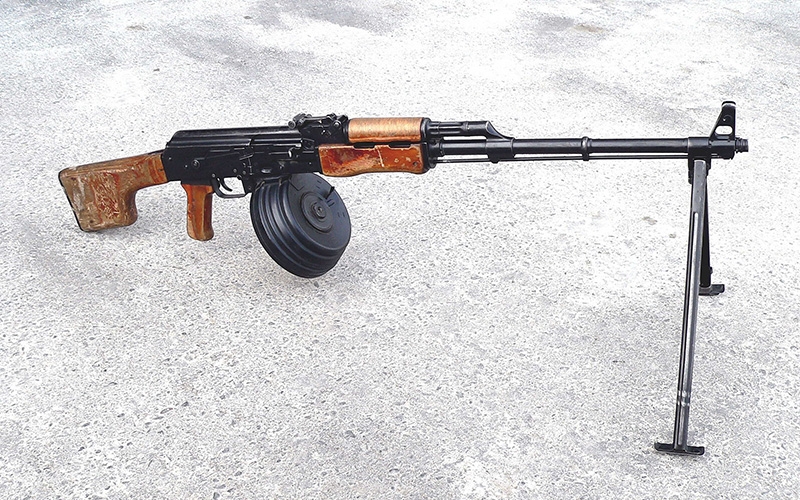 – trunk lengthened to increase the initial speed of the bullet with 715 m / s to 745 m / s;
– reinforced insert receiver;
– increased stem weight to ensure a more stressful mode of fire compared with AKM;
– equipped with light folding bipod (enshrined in the muzzle of the barrel) to ensure stability in shooting;
– increased capacity gun shop (sector - to 40 rounds, Drum - up 75 rounds) to increase the rate of fire;
– the stock is shaped butt machine gun Degtyarev for easy shooting (refined neck butt allows for shooting with fully cover his left hand);
– Sight is equipped with moving entirely to account for the influence of external conditions on the accuracy of shooting a machine gun RPK. 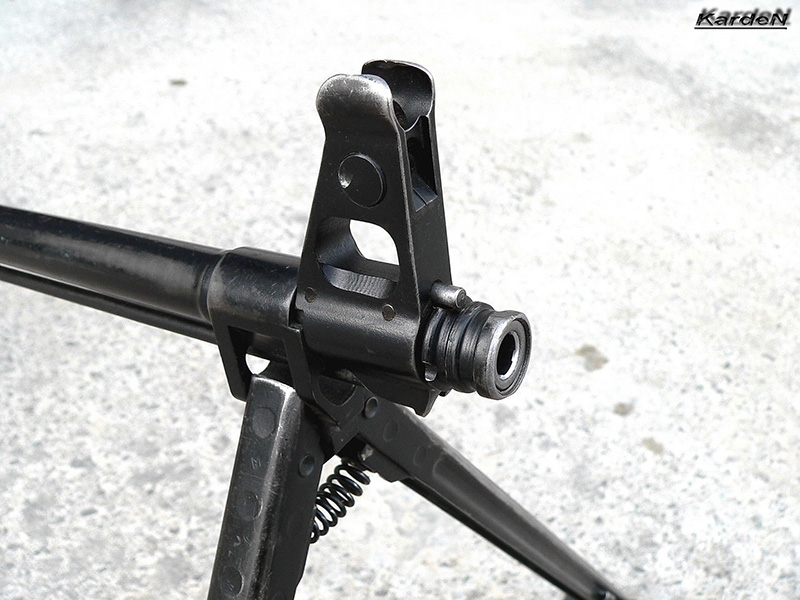 normal requirements of single combat for the PKK:

– All four holes fit in a circle with a diameter 15 cm;
– middle point deviates from entering the control points are not more than 5 cm in any direction.

– at least six of the eight holes fit in a circle with a diameter 20 cm;
– middle point deviates from entering the control points are not more than 5 cm in any direction.

Verification is carried out by shooting a fight on a black rectangle height 35 cm and a width 25 cm, fortified white panel height 1 m and width 0,5 m. Firing range - 100 m, position - lying with bipod, cartridges - with an ordinary bullet, sight - 3, steel - 0.

The total median deviation at a distance 800 m (vertical and width): 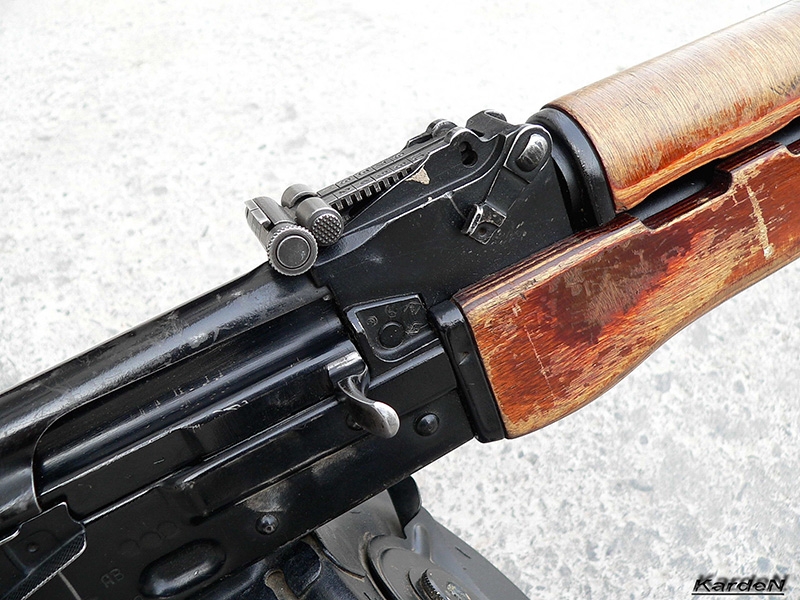 RPK consists of the following main parts and mechanisms:

The sighting device KRG includes front sight and sight, in turn consisting of pads sight, leaf spring, sight leaf, steel and homutika. On the upper and lower sides of sight leaf are plotted on a graduated scale 1 to 10 (firing range in the hundreds of meters), and at the wall socket pillar - scale with ten divisions for the lateral correction, each of which corresponds to two thousandths of the firing range.

For machine guns later releases attached device for shooting at night (self-luminous nozzle), consisting of a folding rear sight with a wide slot (mounted on the rib) and the general flies (It is worn on the fly arms from above), which bear luminous spots. This device is not separated during operation - at day shooting front sight and rear sight down recline, without interfering with the use of standard aim adaptations. 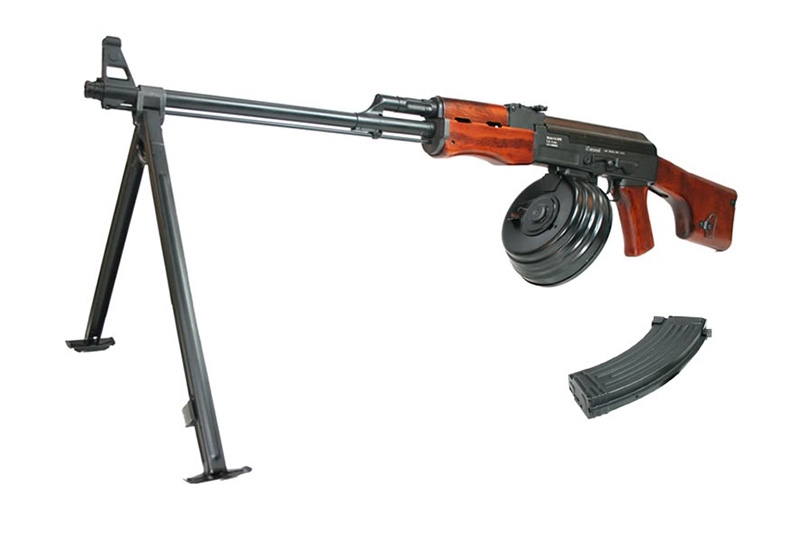 Automation has a gas engine with a long stroke, t. it is. effect due to removal of powder gases through the lateral opening in the barrel wall, a gas piston with piston rod is rigidly connected to the slide frame. shutter locking is performed by turning, wherein two combat shutter protrusion enter the corresponding grooves of the insert receiver. Handle reloading located to the right and is integral with the slide frame. The longitudinal bore of the bolt is placed a return spring. Backgauge guide rod return spring is pressed latch receiver cover. High demands on the trunk vitality, use bullets with steel core and a bimetallic shell required measures to improve barrel life, however bore, the chamber and the piston rod with the piston bolt subjected chroming.

The impact mechanism - a hammer type on a rotary hammer axis and U-shaped twisted mainspring. The trigger mechanism allows keeping an automatic and a single lamp. The single rotating part acts as the interpreter kinds of fire and safety lever. In the "fuse" it blocks the trigger, whispered a single and automatic fire and prevents the backward movement of the bolt, partially overlapping the longitudinal groove between the receiver and its cover. Self-timer holds the hammer in the cocked position to the full locking bore. The shot is made with front sear, but the heavy trunk and firing short bursts mostly it does not increase the risk of spontaneous firing of the heating chamber.

Shoplifting system power made to develop a more capacious, than that of the machine, shops - a box, sector-shaped, dual inline 40 cartridges and drum capacity 75 rounds. The cartridges are placed in a drum store of a generator in ulitkoobraznom Brook, formed by the fixed scroll and the housing cover Store. Promotion spiral cartridges to store the neck provides a rotary feeder with spring, intravascular when loaded magazine cartridges. PKK Shops interchangeable with automaton. 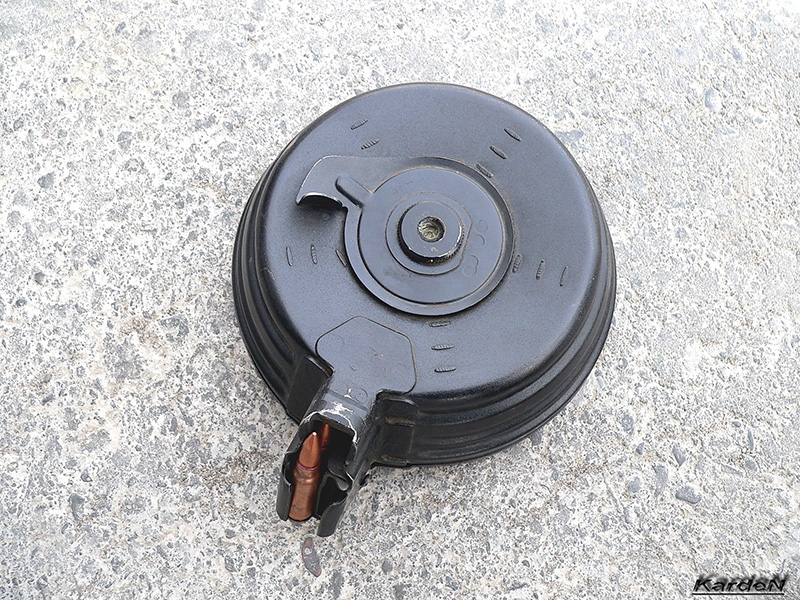 Firing is carried out PKK sample cartridges 1943 of the year (7,62×39) with the following types of bullets:

– common iron core is designed to destroy enemy personnel, situated behind obstacles or openly, bullet pierces. Shell - red brass coated steel, core - Steel, between the shell and the core - Lead shirt. It does not have a distinctive color.

– tracer designed for target designation and fire adjustment at a distance 800 m, and defeat enemy personnel. The core consists of a lead-antimony alloy, behind it is a pressed glass with a tracer composition. Color bullet - green.

– armor-piercing incendiary intended for igniting combustible fluids, as well as engage manpower, for lightly armored shelters located at distances of up 300 m. Shell - handpiece with Tompakova, core - steel with a lead jacket. Over the core is a lead pallet incendiary composition. The color of the head part - black with a red belt. 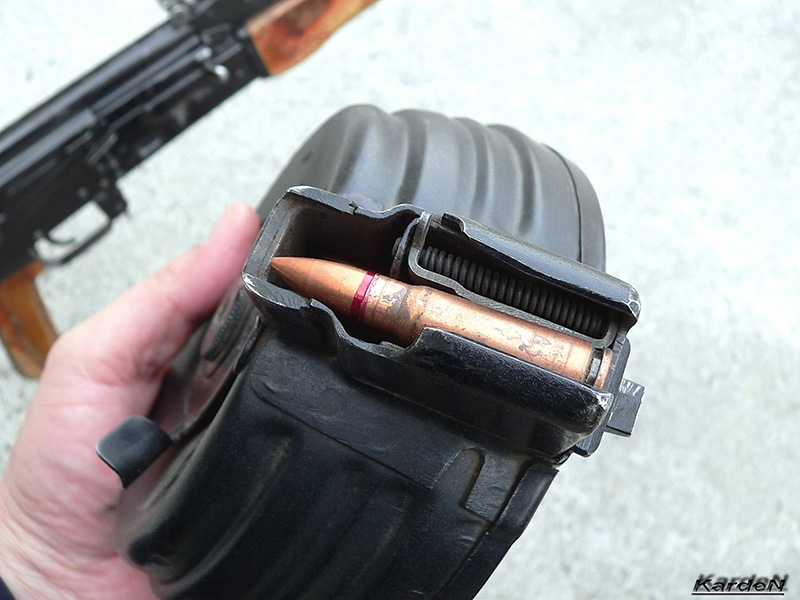 – korobchatыy store 40 rounds (can be used to store 30 bullets from AK); drum magazine on 75 rounds 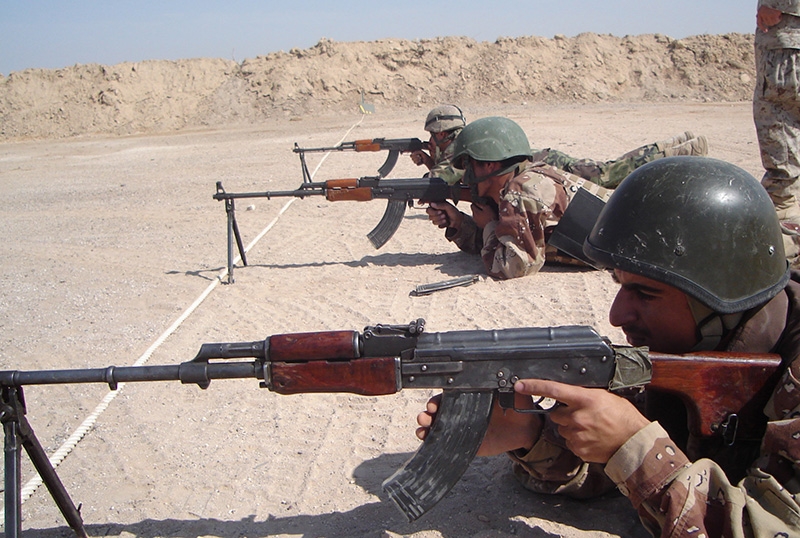 Iraqi soldiers are trained in shooting from the PKK 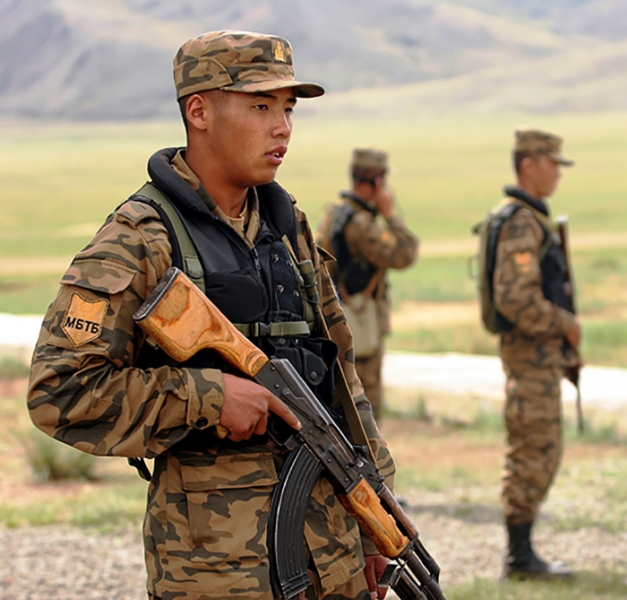 Mongolian soldiers with the PKK 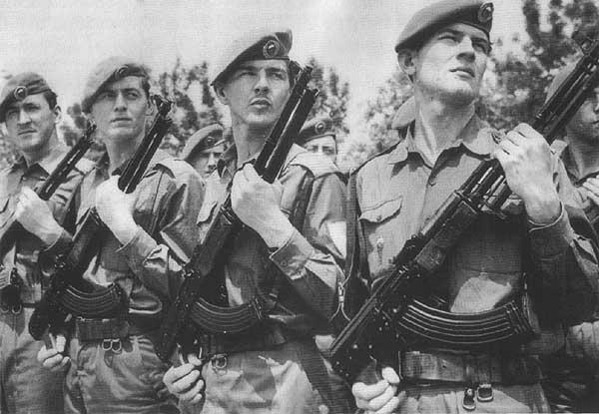 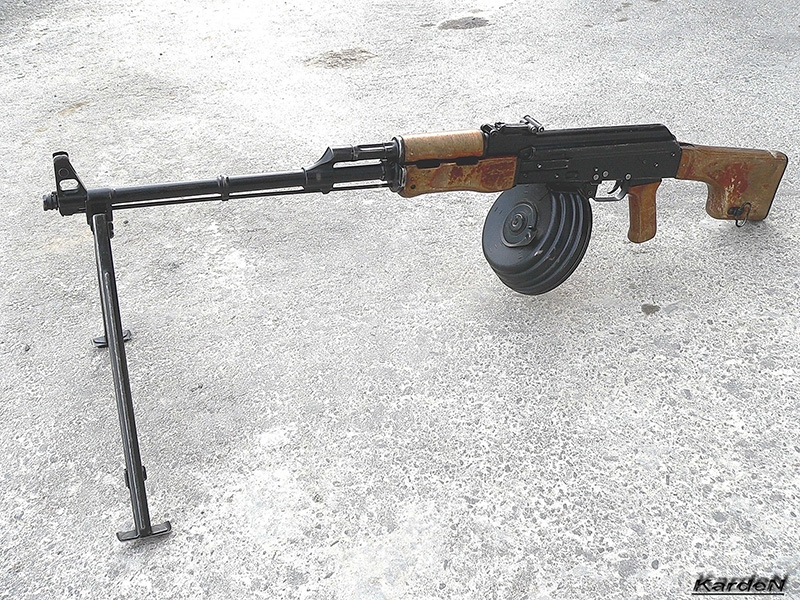 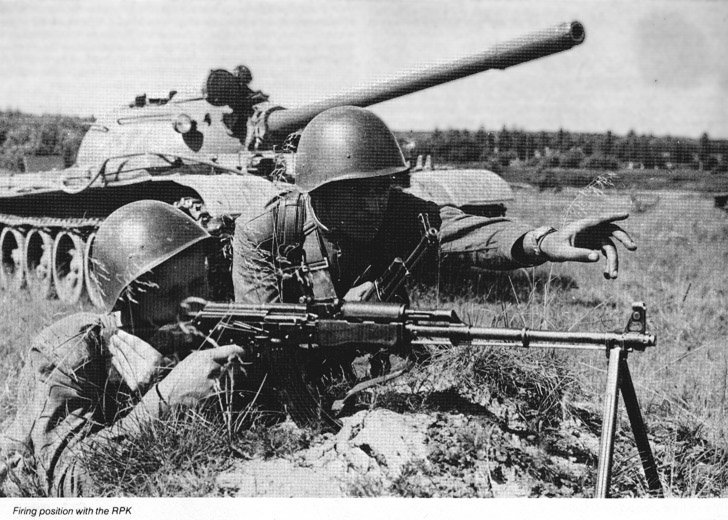 Comments
Subscribe
news
interesting
news Representative of the Armed Forces of Ukraine in Lisichansk: The situation in the city will only get worse for us. 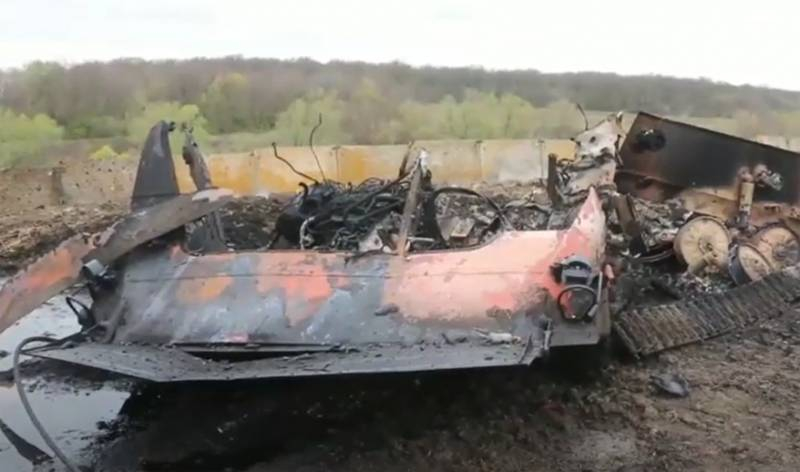