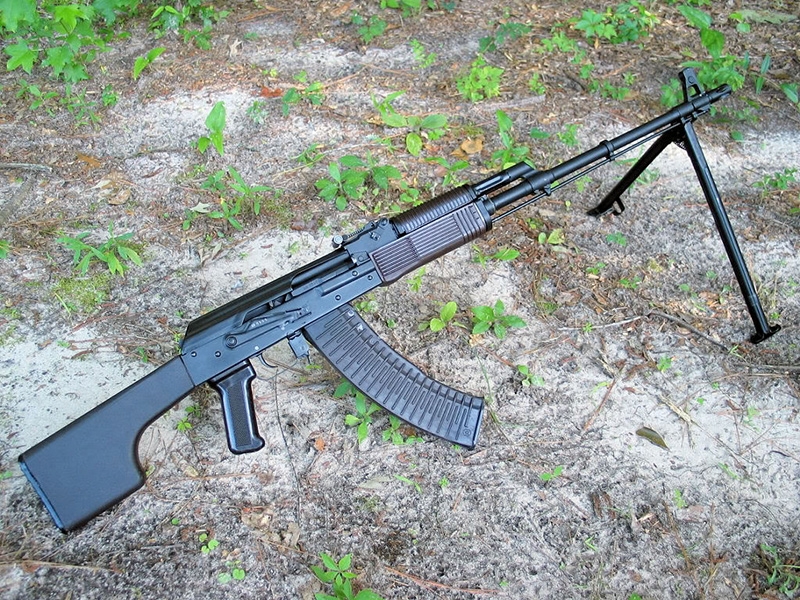 Resolution of the Central Committee of the CPSU and the USSR Council of Ministers 18 January 1974 g, and then the order of the Minister of Defense of the USSR 18 Martha 1974 g. adopted a new unified range of 5.45 mm was adopted, included a 5.45-mm submachine gun cartridge, Four models are 5.45 mm machine gun and four models of 5.45-mm machine gun with two options butts. In developing the 5.45-mm submachine gun cartridge (5,45×39) with reduced recoil initially taken into account for its use as a machine, and for LMG. Especially, The new cartridge is allowed to increase agility and hand-carried ammunition gunner.

The new family of small arms machine guns entered the PKK 74 (6P18 index) with fixed buttstock and RPKS 74 (6P19) with a folding butt. Differences their design, compared with an AK 74, more difficult, that of the PKK in comparison with AKM - elongated barrel, the presence of a folding bipod and a large capacity of the staff shop. New elements were muzzle device and store. On the muzzle of the barrel is mounted slotted flame arrestor, which can be replaced with a sleeve blank firing.

As in AK 74, in machine gun on the slide frame to facilitate the left side cutout, a rectangular bottom frame protrusion shutter eliminates interference with the upper cartridge in the magazine upon movement back parts of automatics. The shutter is reduced and does not have the annular recess in the cup, firing pin protrudes above the mirror shutter. Ejection slot in the gate took the form of an open groove. Gas tube with handguard on the back end has a spring washer, eliminating its swing and spacing action on the gas chamber.

PKK 74 It is provided with a sector sight mechanism with the introduction of side corrections. Fire from machine gun conducted mainly in short bursts, "the average length of the queue - 5-7 shots. Reducing the recoil momentum and less time a bullet to the target allowed about 1,5 times to improve the accuracy of fire compared to 7.62 mm PKK. Series maloimpulsnogo rounds of small arms includes chuck 7N6 with an ordinary bullet with steel core PS, 7TK with a tracer bullet T, 7TPM with the upgraded tracer bullet, with armor-piercing bullet BP, 7H10 bullet with increased breakdown action PP, as well as a blank 7X3 and Training. When the mass of the bullet SS 3,45 g cartridge weight is 10,2 city, ie. weight portable ammunition at the same ammo is in 1,5 times less than, than when the cartridge arr. 1943 g.

Powered machine gun - from the box magazine with a sector-shaped plastic body and staggered dual inline 45 rounds. There is a special device for equipment stores from clips. For the PKK 74 and RPKS 74 received a box magazine, from the disk store PKK 74 They refused for production and economic reasons. In the manufacture of stock and forend of the tree gradually switched to plastic (glass fiber reinforced polyamide). 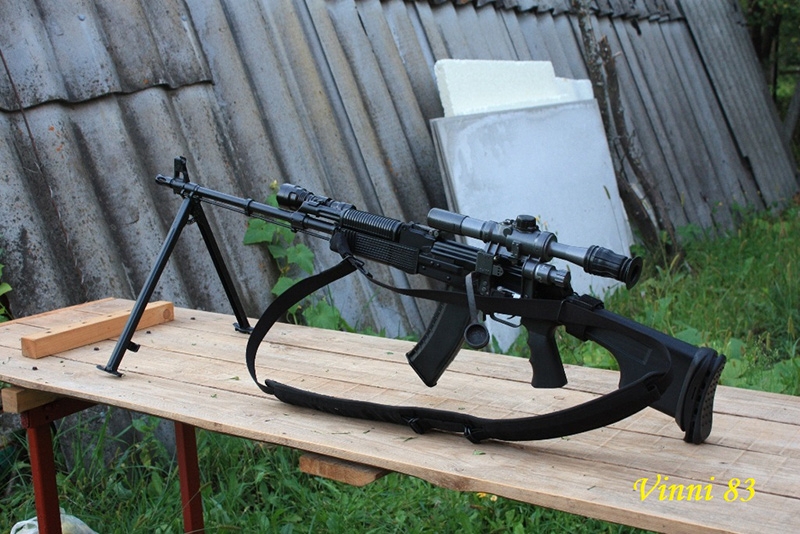 It is worth noting, that the Soviet Union before, than in other countries, unification was carried out as a normal infantry weapons, and small-caliber, to link department-platoon. This was facilitated by high reliability and supply of modernization, laid down in the "Kalashnikov".

PKK 74 and its variants are in service in Russia, former republics of the Soviet Union and in several foreign countries. Abroad (in the GDR, Poland, Yugoslavia, Libya, Finland) produced copies of the Soviet machine guns PKK and the PKK 74 and their modification or to create their own models light machine guns "Kalashnikov". 5,45-mm machine guns also have a "night" modification. Plank on the left side of the receiver RPK machine gun 74N is used to set bespodsvetnyh (passive) night sights with a standard attachment such as "dovetail". 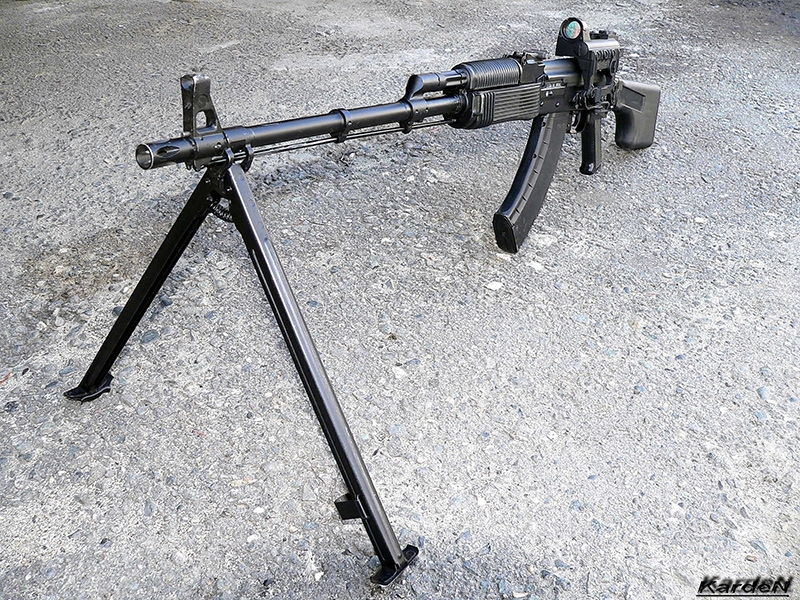 In accordance with the model mounted night sight isolated modification: PKK 74N1 - with an eye NSPU (1PN34); PKK 74N2 - a sight NSPUM (1PN58); PKK 74NZ - with an eye NSPU-3 (1PN51). Can also be used night sight NSPU-5 (1PN83). This sight has a multiplicity of amplification 3.5x allows identifying a person at a distance of 300 m. It can also put a universal rifle scope magnification 1P29 4, weight 0.8 kg. The local conflicts found use as machine guns RPK 74N installing optical sight instead night. Mass RPK 74N1 gun in firing position with an eye was NSPU 7,66 kg. 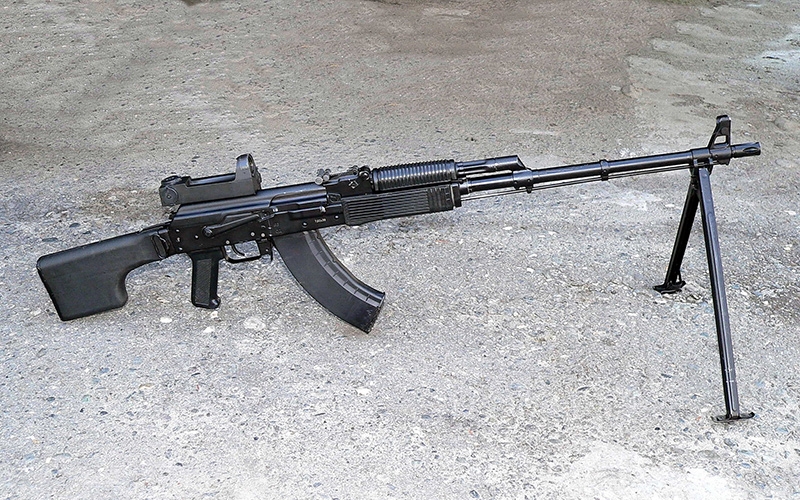 RPK-74M (GRAU index - 6P39) - a modernized version, It has the following number of differences:
1. similar to the AK-74M, handguard and handguard gas tubes are made of impact-resistant glass-filled thermoset AG-4B. Metal parts are well protected against corrosion coated.
2. increased resource when firing barrel at the time of the new modernization 7N10 cartridge with enhanced penetration bullet (claimed barrel life - to 50 thousand shots)
3. enhanced receiver and its cover. On the left side of the receiver there is a bar for installation of night or optical sight
4. abutment guide rod return spring is provided with recessed abutment (which prevents breakdown when the receiver cover bumps and knocks)
5. gun is equipped with a folding plastic butt to the left, latched in latch pushbutton firing position 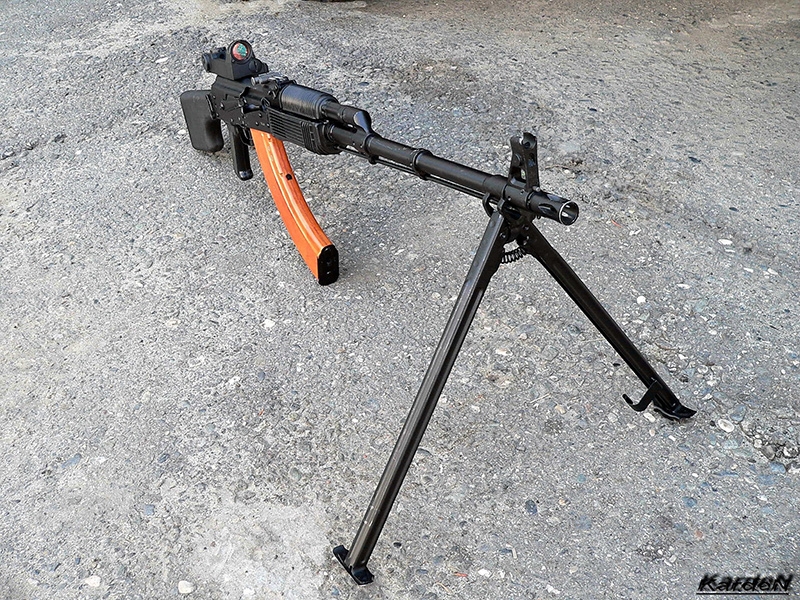 The performance characteristics of the PKK-74 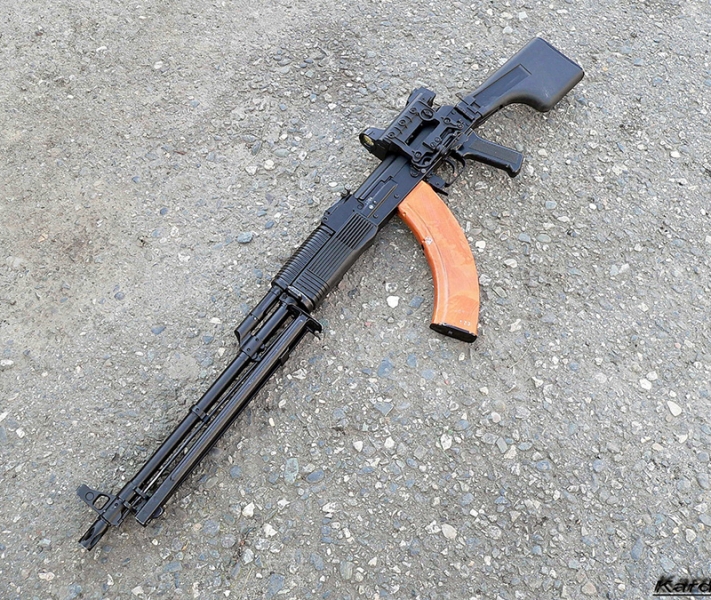 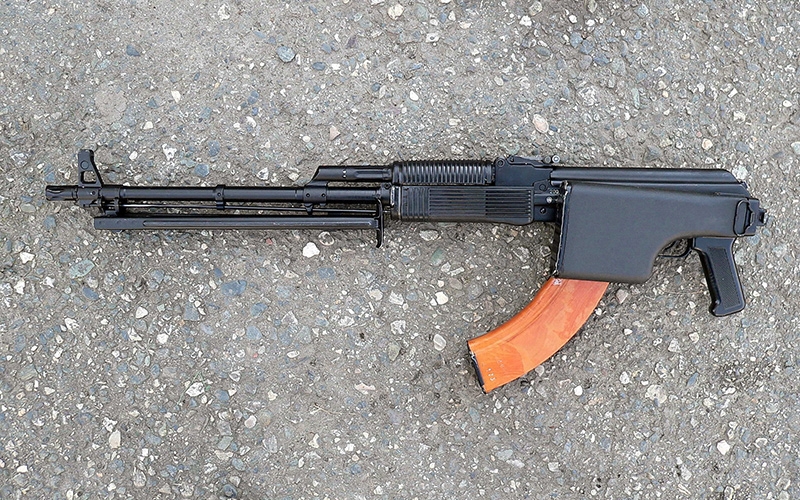 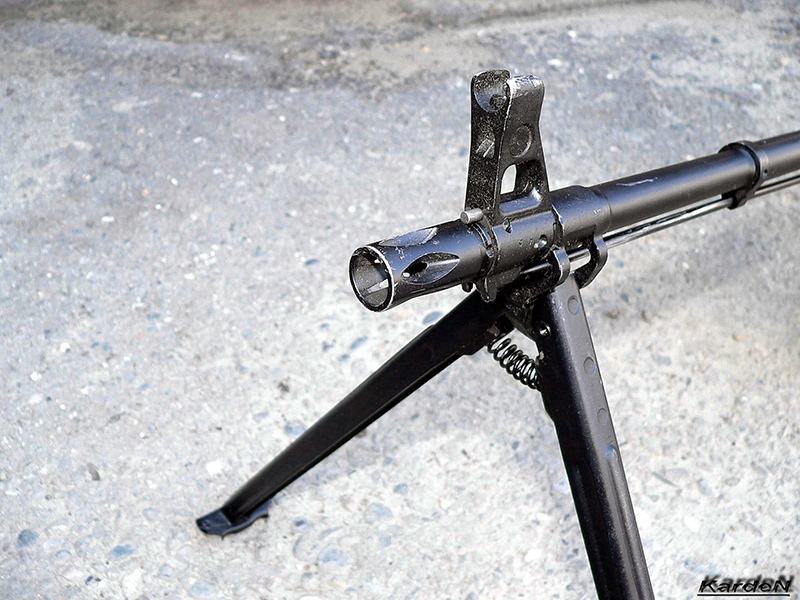 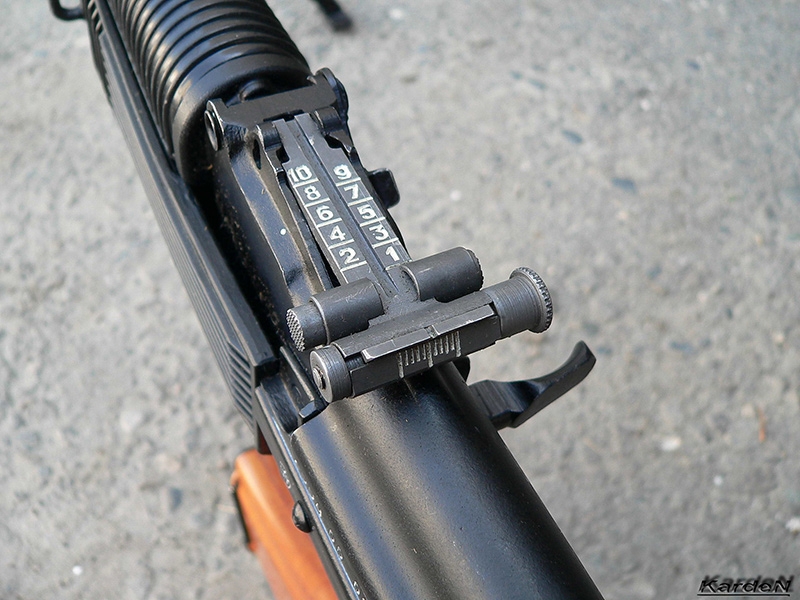 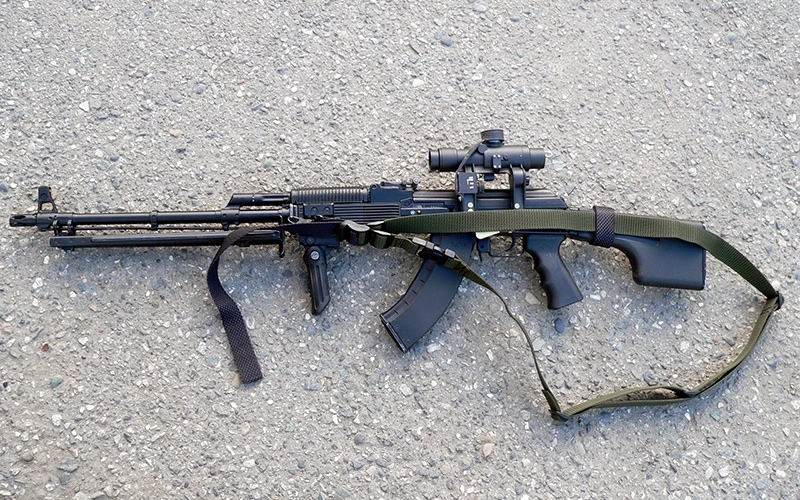 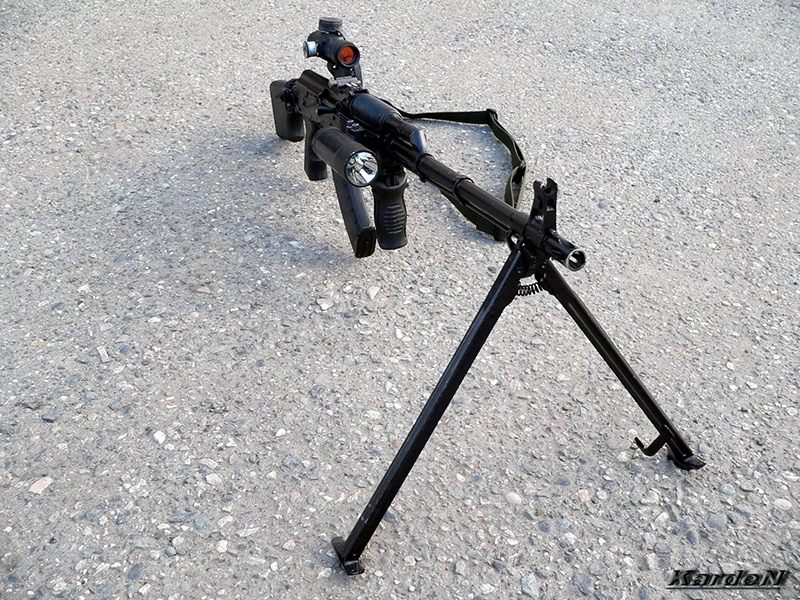 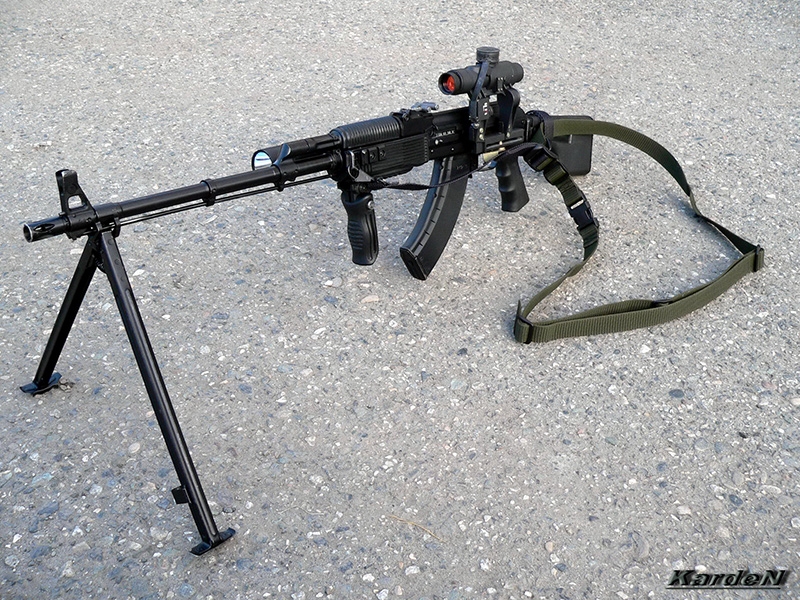 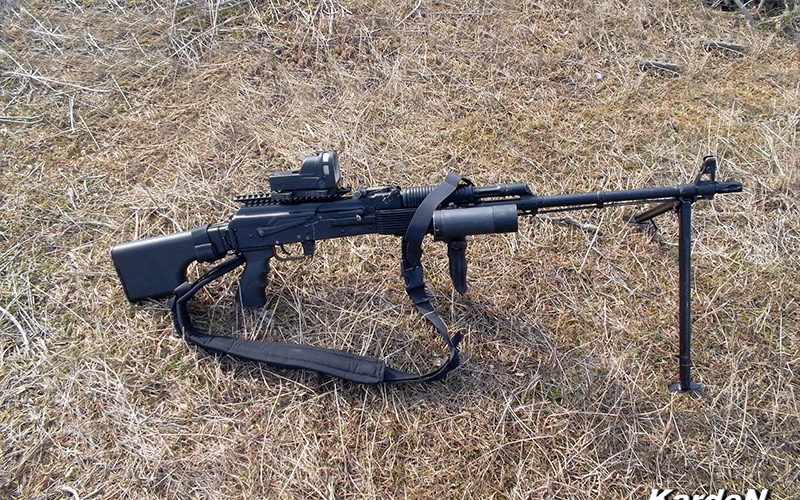 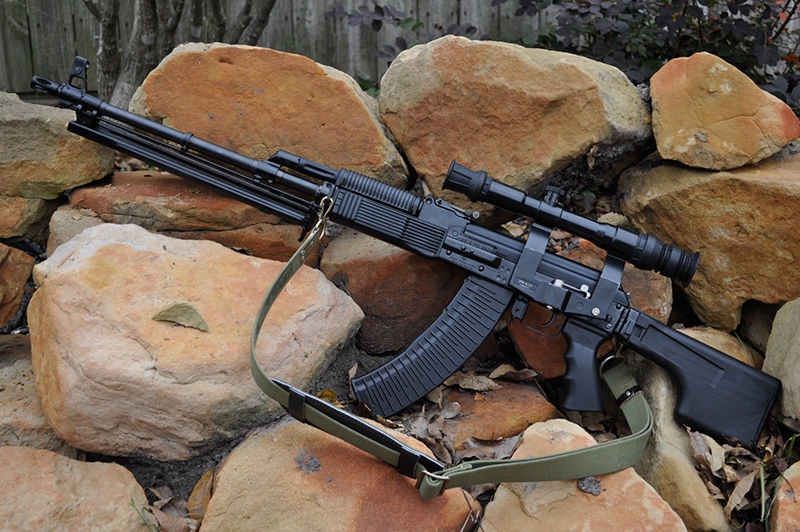