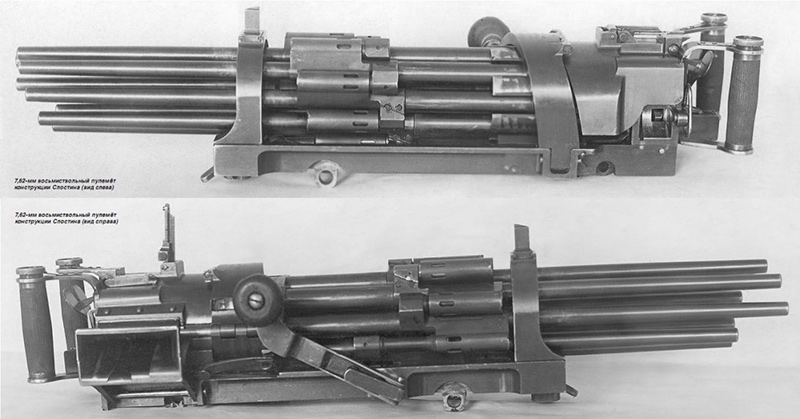 Slostin machine gun - Soviet experimental gun with a rotating barrel unit chambered 7,62 × 54 mm R, and later under 14,5 × 114 mm. A striking difference slostin machine gun from the other, a known construction with rotating barrel unit - Gatling gun was then, that has not been used for an external rotation (manual or, later, electric) drive unit, and the energy of powder gases.

Little known in wider circles Kovrov weapons designer Ivan Ilyich Slostin more than ten years of his artistic career spent working out multilateral vysokotempnyh guns, built on the principle of removal of powder gases. Also in 1939 g. vosmistvolny his gun with removal of powder gases through the muzzle passed field tests. The machine gun was designed for aircraft armament, as a means of defense, and for shooting at ground targets.

When testing has been fixed high rate of fire 3300 rds. / min., but, when heated after 250 shot gun completely denied in operation due to the expansion trunks and harmful increase of resistance during their movement. It leaves much to be desired and the accuracy of fire. 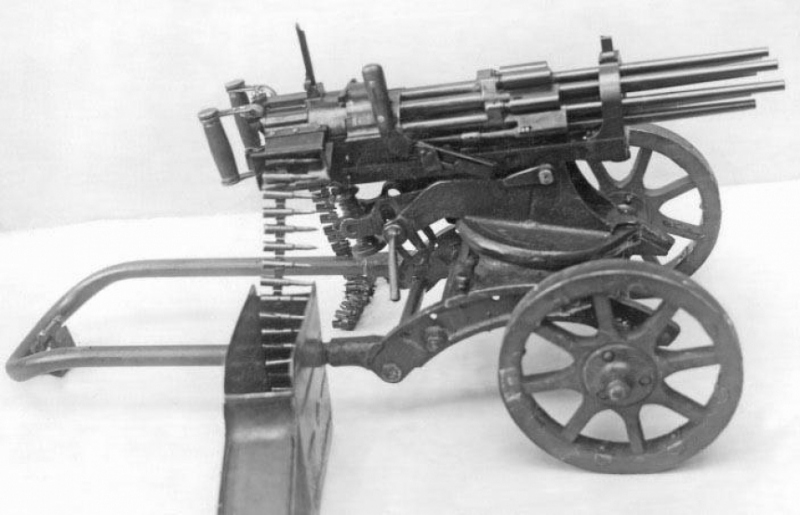 In August-September 1946 g. regular field tests were carried out 7.62-mm machine gun barrage vosmistvolnogo I.I. And Slostina, on the test gun it was presented absolutely different from the sample design 1939 g.

Multicore machine gun I.I system. Slostina is an automatic weapon with eight sequentially firing barrels, work automation is based on the principle of removal of powder gases through a special cross-channel in the trunk. The machine gun is a weapon of heavy fire and can be used to combat the manpower of the enemy and moving unarmored objectives, as well as air defense systems to combat aircraft.

The machine gun is a system with eight barrels, interconnected front and rear couplings thus, that the assembled unit is a barrel drum, in which the trunks have the ability to move longitudinally.

Each trunk has a gas chamber and a gas piston, through which produced momentum transfer withdrawn gas stream to the mobile system to make the automation cycle. The gas piston of each barrel is placed into the gas stem the bolt, standing next to him, So, that a closed circuit is obtained therebetween.

Assembled barrel assembly placed on the axis, the ends of which lie in the fore-end bearings and in front of her desk. With these bearings trunks together with the couplings are rotatable about the longitudinal axis of the gun. Based on the gun and on the lid groove follower is formed, in which rolling rollers, sitting on thorns trunks. 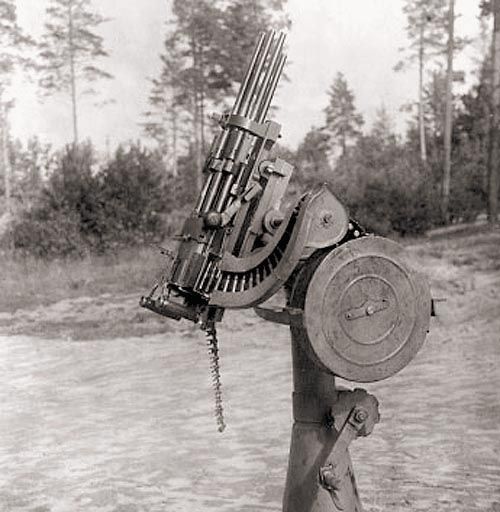 At the rear bearing guns, associated with rotating shafts special rackwheel with external and mechanical tooth. With the outer tooth movement is performed with tape cartridges, end the tooth to make raising and descent drummer during automatic firing. Drummer, action spring and firing pin placed in the gun back plate. Structurally, the system has no shutter - locking bore is a support roller in the barrel wall of the base of the groove.

The machine gun, prepared to fire, Insert fully placed in the chamber, and implemented locking bore in the lower barrel gun. At this time, the capsule holder is located opposite the pin, He cocked the hammer and the sear is held. In operation, the automatic shooting is out of the barrel, which becomes, after rotation of the drum shafts to a lower position.

For the production of automatic shooting by pressing the trigger the hammer is released from the sear and the action of the mainspring moves forward, striking the firing pin, that breaks the capsule holder. powder gases, following after the bullet of the bore passing through the gas holes into the gas from the firing piston barrel. The gas piston firing barrel at this time wearing a gas chamber neighboring trunk, the right of the shooting. Due to the motion of the neighboring trunk forward rotation is carried out all the drum counterclockwise, whereby it is like leading in system operation. 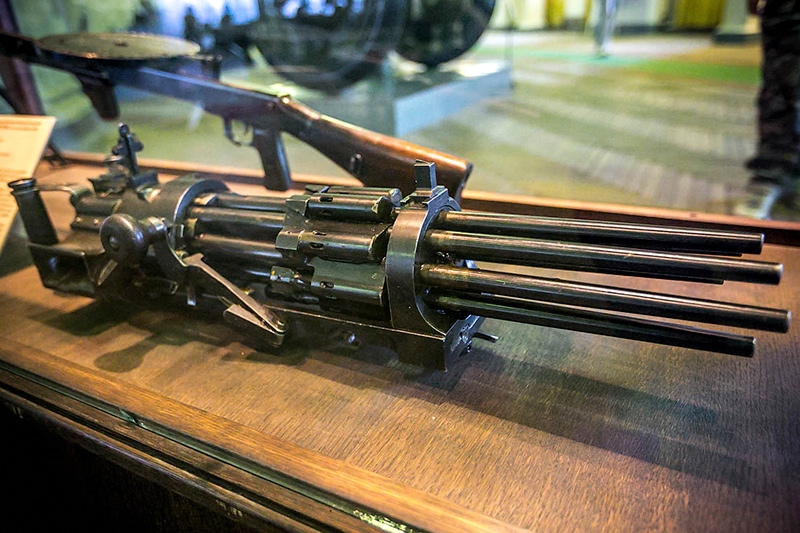 leading the stem clip, while moving forward trunk, rolls on a guiding groove base and makes the entire reel shafts to rotate about the longitudinal axis of the gun. At the same time shooting the barrel moves and takes the place of the master, and in its place comes a new trunk with live ammunition. At the same time moving the firing barrel sleeve is its rim enters the hooks on the back plate, and the end tooth toothed wheel cocks the firing pin.
As soon as the drum is rotated by shafts 1/8 part of the total turnover, drummer jumps with mechanical tooth and toothed wheels again strikes the firing pin, that breaks the capsule holder in the approaching on the next site of the first barrel.

At this time, the first barrel of the shooter stands on the site master and just as by the pressure of gases to the bottom of its gas chamber begins to move onward and upward, leaving the sleeve in a hooked buttplate. Proceedings of the barrel is 50 mm.

barrel drum makes a new twist on 1/8 turnover and, moving the barrel while firing the place of the master, pushes the sleeve out of the cavity gun.

Movement of the tape through the machine gun carried tooth outer toothed wheels, and disposed over its surface with helical rammer trunks when the drum rotates slowly pushes out the cartridge from the tape towards 30 mm, and firing guns, moving rollers of a guiding slot cover, come back and put on a cartridge. When releasing the trigger, drummer becomes cocked and firing ceases.

When gun tests declared by the author firing rate 3000-3100 rds. / min. was not reached. The real rate of fire was 1760-2100 rds. / min. According accuracy of fire a barrage of machine gun gave way to heavy machine guns Goryunova arr. 1943 g. approximately at 67 time. However, it was noted, that machine gun with a large rate of fire can prevent the increase of bullet spreading, as the density of the fire is large enough.
Generally, testers appreciated the brainchild I.I. Slostina, as you can see, reading the technical meeting materials.

In May 1949 g. NIPSMVO GAU BC held the last test layout vosmistvolnogo slostin machine gun caliber 14,5 mm. Automatic machine gun differed from the previous design mainly the, trunks that block using the rear coupling and front ferrule assembled to a rigid structure with no possibility of longitudinal displacement of each of them, and block the rotation when rollback is carried out with a gas piston slide (firing barrel), that its roller interacts with a guiding groove and clamp pads.

The story vosmistvolok Slostina over and prototypes ended up in the vaults of museums. However, innovative approach to solving the complex technical task of creating vysokotempnogo gun and original mechanisms slostin machine gun design still surprises even experienced designers gunsmiths. 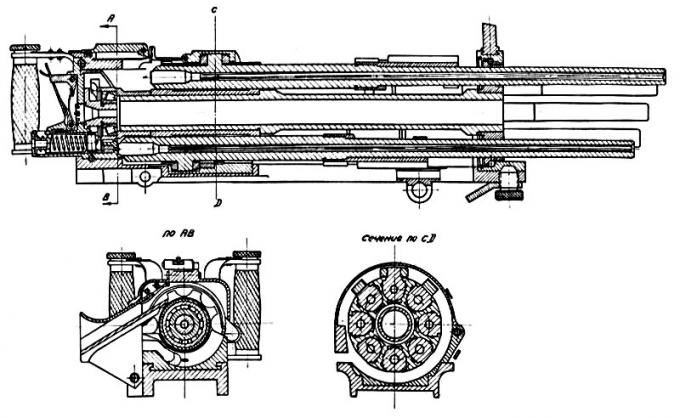 The opinion of the participants of the meeting

Designer Slostinu could well decide the idea of ​​creating a multilateral gun: high rate of fire, the possibility of prolonged firing, The system is compact. Finalize the gun and use it as a means of enhancing the infantry. Try to make a machine gun caliber 14,5 mm. Under it is possible to create a good zen. install.

Tests were carried out well and allow to figure out, that it is necessary to judge the combat and technical qualities slostin machine gun. High rate of fire depressing effect on the enemy (It cites data from the US and German sources). Accuracy of hits on 100 of R50 (= 40 cm) you can take (provides data on the requirements for accuracy of hits US and German machine guns 1945 city). The weight 28 kg, if compare with machinegun Maxim, not so great.
Vitality can get a decent. Reliability can also be increased.
Machine gun permits 1500 shots without cooling trunks. It gives him tremendous fighting rate. Machine gun finalize.
Place for its use once there. As a means to strengthen the infantry it is indispensable, This is evidenced by the experience of war. Infantry loved to indulge in schetverenki Maxim, and it will be better schetverenki. Make this gun chambered 14,5 mm. 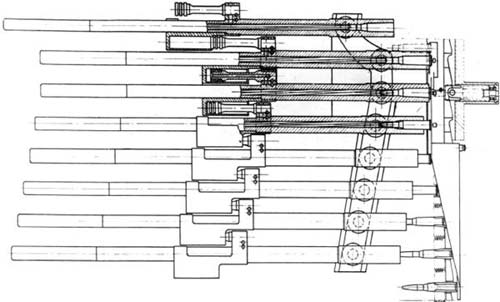 The mutual arrangement of trunks (unfolded)

I agree with the opinion of TT. Lysenko and Slutsk. For the 14.5-mm caliber is unlikely to get a good survivability. Abrupt stopping drum detrimental effect on the strength. But get this gun is very tempting - it has a purpose. Rate of fire for 14,5 mm need to save, like this 7.62 mm caliber.
ribbon - 250 cartridges does not satisfy, We need at least 500 (the coupling).
Use a 7.62-mm machine gun can be, but to give him a good setting or field machine (to carry the machine).

Use slostin machine gun in the infantry divisions (platoon, company) it is impossible - it is too heavy. As the amplification means worthy. Increase the capacity of the tape. There are no small parts of the gun. Vitality can get a good. Judge whether, how to behave when the gun caliber 14,5 mm prematurely.

Resolved: tests are performed adequately, they allow to draw conclusions, cited in the report № 242. 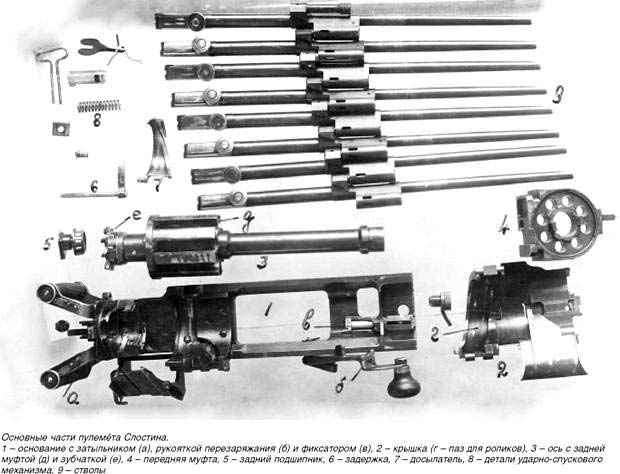 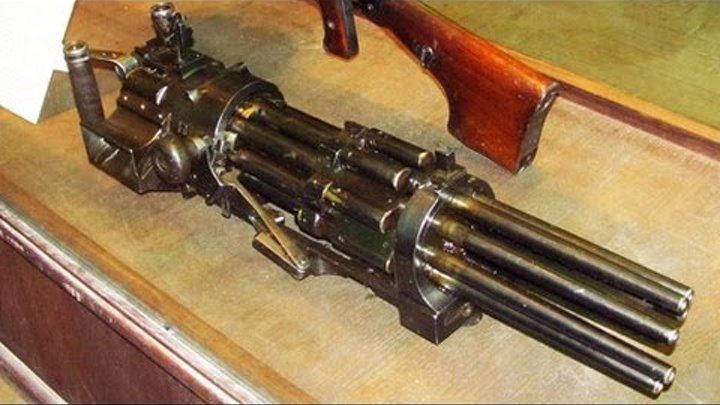 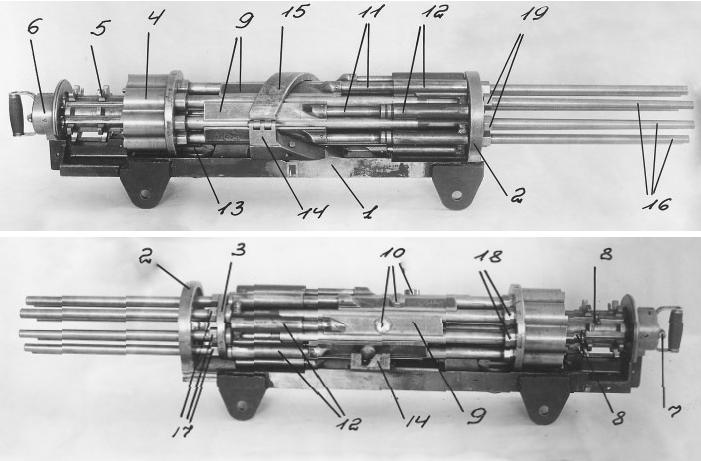 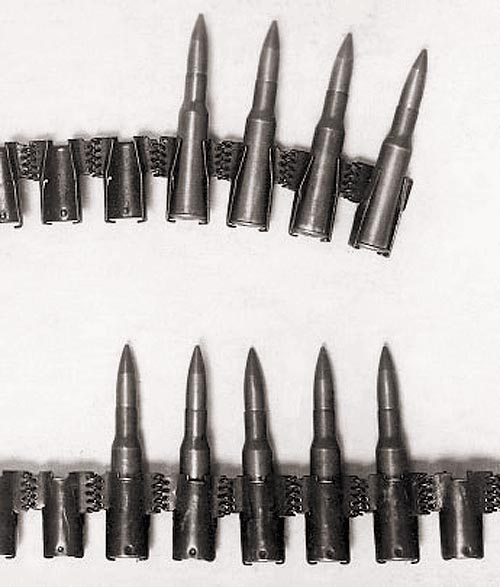