Educational materials
Equipment
weaponry
New on site
news Member of the European Parliament from Lithuania: Russia wins in absentia in the discussion of the European Commission on transit to Kaliningrad
news Head of the GUR of Ukraine: By the end of the year, the fighting will be reduced to zero thanks to our victory.
news Representative of the Armed Forces of Ukraine in Lisichansk: The situation in the city will only get worse for us.
news In the Kyiv region imposed a curfew for a week, but then they changed their mind
news Chinese Ambassador to France: We will take back Taiwan by any means necessary., including the military 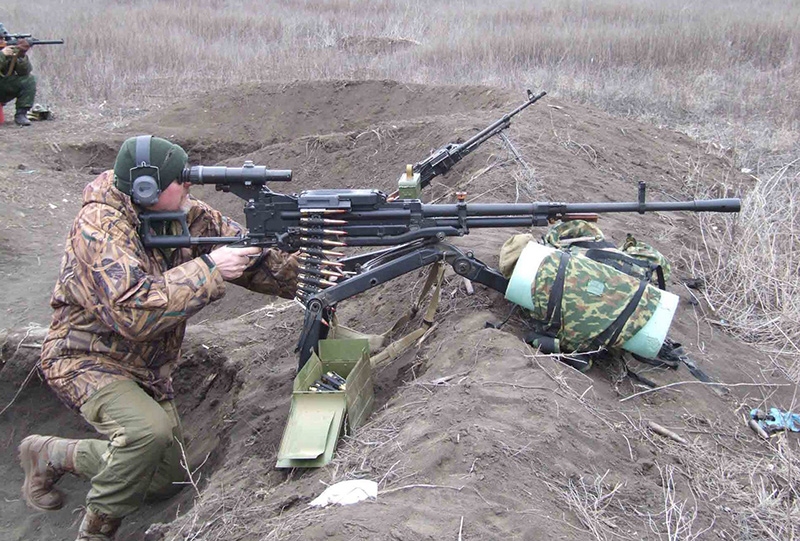 Heavy machine gun NSV-12.7 "Cliff" was developed in the Tula TsKIB COO in the late 1960s - early 1970s as a replacement for the outdated heavy and the ANC (DŞKM). His name was given to the initial letters of the names of authors - D. AND. Nikitin, YU. M. Sokolova and B. AND. Volkova. Shortly before that, the same team participated in the competition for general-purpose machine gun caliber 7,62 mm, but the preference was given to the model M. T. Kalashnikov.

it was decided to create a new production of HCB plant in g. Uralsk Kazakh SSR, named "Metallist", since production in the Degtyarev Plant in Kovrov was handled. As the labor force was attracted a large number of engineers and workers from Tula, Kovrova, Izhevsk, Samara, Vyatskiye Glades. In the production of NCW were applied entirely new and original technology of various Allied Research Institute, some of which in the manufacture of small arms were not applied anywhere else. So, for the rifling of the bore electrochemical treatment was applied, for thermal tempering - vacuum release system, so-called "thick" chrome to improve the vitality of the barrel achieved inkjet technology chroming. 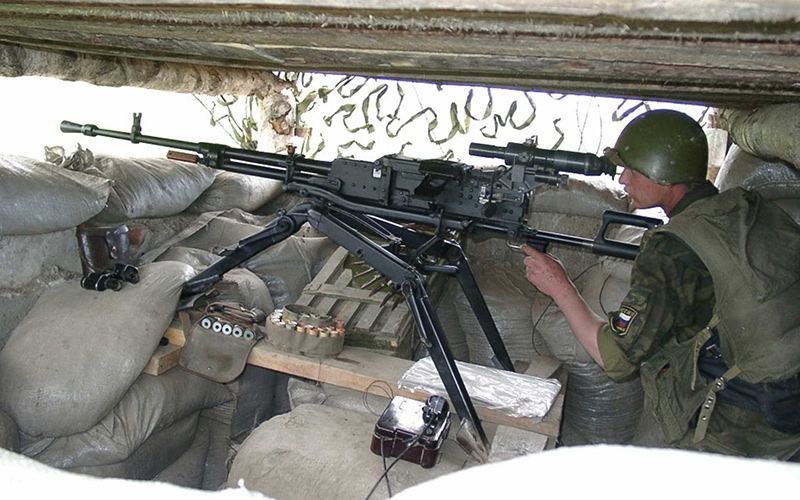 In the process of debugging and regular testing of production factory designers had made a huge number of changes to the design of the machine gun, mainly aimed at improving the survivability and reliability of, as well as design simplification.
NSVT-12.7 T-72 production in India 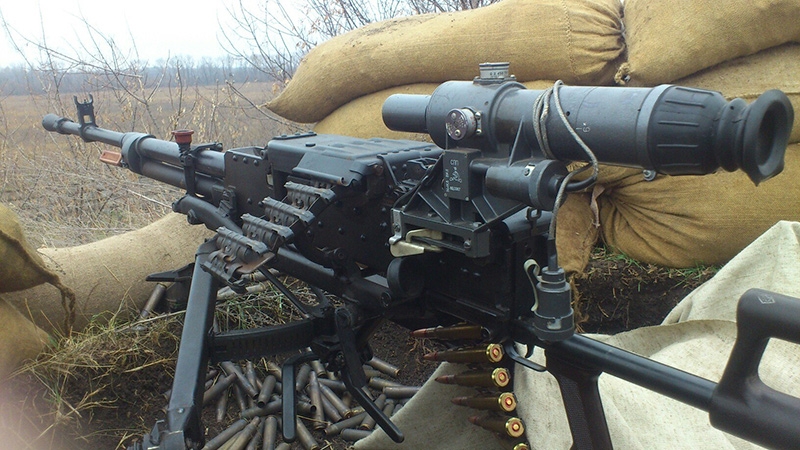 Cartridge B-32 (bullet weight 48 g) - armor-piercing incendiary and BZT-44 (bullet weight 44 g) - armor-piercing incendiary tracer were "inherited" from the ANC. The most common types of. There are two types of them - the so-called "military" (preserved from the times of the Great Patriotic War) and "new". The thing is, that in order to reduce the weight of its gun barrel was considerably lightweight compared to the ANC. Designers abandoned the use of radiators - in addition to weight reduction, the trunk has become much smarter. But this, in its turn, It affected its vitality - the first batch of trunks "burnt out" after the 3-4 thousand rounds. In the infantry version of the machine gun had to complete 3 trunks, to comply with all the guaranteed resource gun - 10 thousand shots. As a result, it was decided to use the so-called phlegmatizing additive propellant charge or Phlegmatized powder in the manufacture of cartridges. Until then, they were only used in artillery. Vitality trunk when using new cartridges increased to acceptable limits - on periodic tests, when the hard shooting mode (50 fired a single burst and 50 - three bursts of 15-20 rounds) trunk stood for nearly 6 thousand shots. But often, the troops did not distinguish between old and new cartridges, and the plant in Uralsk received a complaint on untimely "death" trunks. 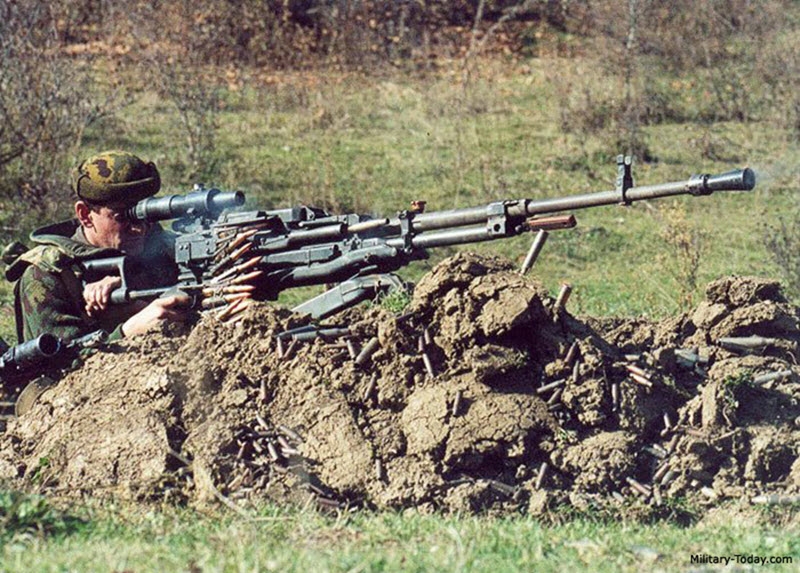 Holder with a bullet BS (bullet weight 55 g) - as armor-piercing incendiary, but provided with a core of hard metal. It was designed in the late 1970s, when it became clear, that armor-piercing B-32 is no longer sufficient to deal with the modern armored personnel carriers and infantry fighting vehicles.

In connection with greater prevalence in the world cartridge 12,7 × 99 mm NATO compared to the Soviet 12,7 × 108 mm, after the collapse of the Soviet Union in Poland trying to master the production of HCB under NATO cartridge. In Poland, a NATO cartridge gun began to be issued under the name of WKM-Bm. Serb license issued embodiment NCW, besides the standard 12,7 × 108 mm NATO cartridge and under. Kazakhstan has also attempted to adapt the "Cliff" chambered 12.7 × 99 mm NATO for sale abroad, but it required rework almost the entire gun design. fundamental difference, which overcome was impossible - in the construction of the tape. From Soviet tape cartridge is fed forward push shutter, wherein the cartridge has previously sdornut zvenesomnikom. The standard is the NATO machine guns "Browning M2» outdated two-stage supply cartridge in the barrel, wherein the automatic chuck pulls back on during the shutter. The PDR uses 10-sectional pieces, gathering in the tape 50 (in an infantry version) and 70 rounds (on tank installations). Gear belt calculation is performed using a special machine. NATO cartridges come in the forces already in the equipped tape of loose items. 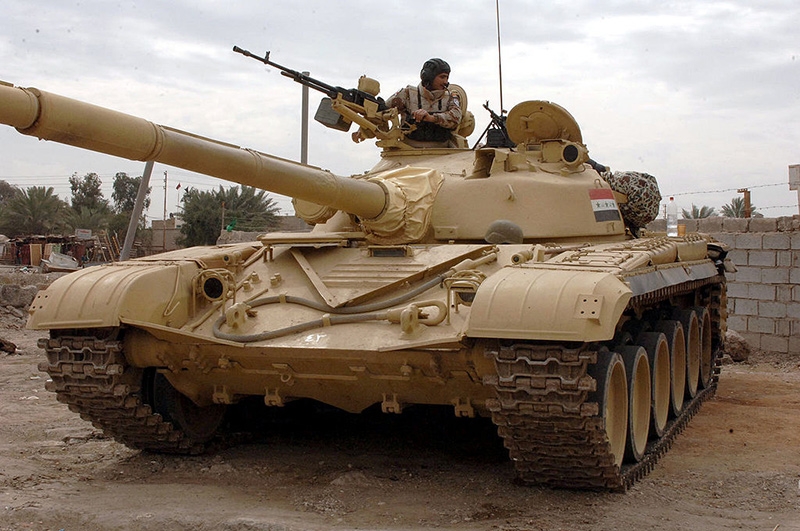 NSW Automation is based on the disqualification of propellant gases, Locking barrel - the wedge, when locking the bolt moves leftward, wherein the shutter hits the firing pin earring.

The trigger mechanism is assembled in a separate box, It has a very simple design and allows only automatic fire. In this case, the trigger is not intended to control directly on the machine gun fire, It requires a handle and a trigger or electric trigger on the machine or system. Also there is no handle reloading, and the force of the spring charging so high, that require different lever or block design to reduce it. The constructions were applied original elements, to reduce friction all moving parts are provided with rollers, cadmium coating serves as an additional "lubrication", quick release locking wedge device provides easy replacement of the barrel without it adjusting operations after change. 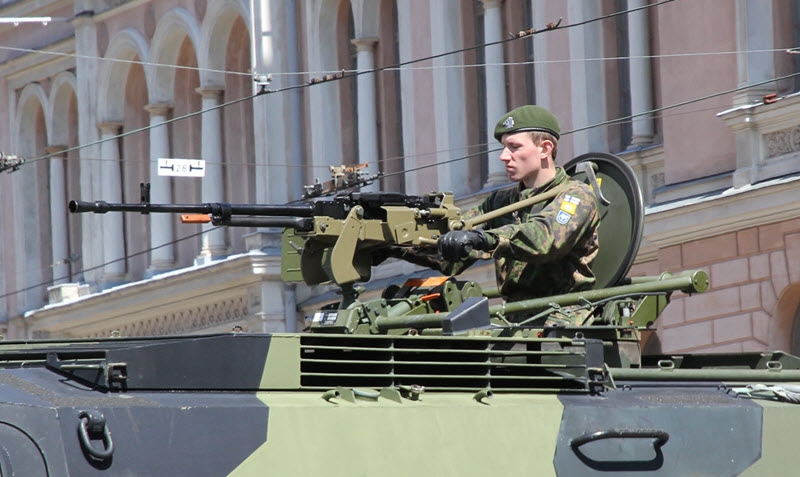 The gate of the bolt carrier and bolt carrier itself with venting piston connected pivotally. A return spring is provided with a buffer. Feed cartridges via the metal strip could be left- or right. Coupled with the release of spent cartridges forward, and not to the side, it is possible to easily combine the "right" and "left" guns in twin installations. One of these, in particular, produced Tula Engineering Plant for boats weapons.

The machine gun is equipped with a conical flash suppressor and a folding carrying handle.

Mechanical sight includes rear sight, marked-up shooting 2000 m (rib DSK was marked up 3500 m), and male. Mushka was originally evolving, but then the plant designers have convinced Grau, What a great sense in this. 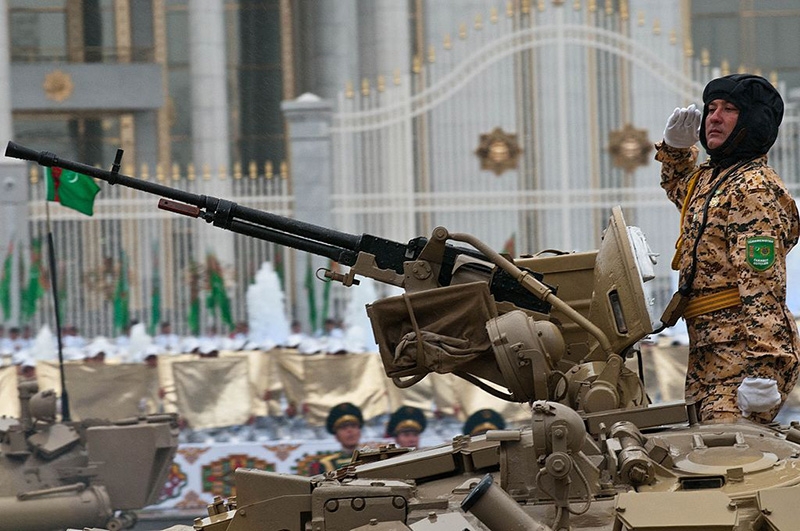 The main application has received a modification NSVT (tank, GRAU index - 6P17) as zenith in tanks T-64, T-72, T-80, T-90, self-propelled artillery, as well as on various armored vehicles. In the 1990s, machine guns NSV was armed with several thousand armored personnel carriers, and XA-180 armored Sisu NA-110 (fine.), produced in Finland for its own armed forces and military units from African countries, operating under the auspices of the UN.

Tank variant gun was equipped with electric trigger, to this end with all the differences. Electric trigger was a primitive coil with rod, collected in a sealed dust- and waterproof housing. I was attached to the back of the receiver, when applying current nominated rod and pressed on the trigger rod. 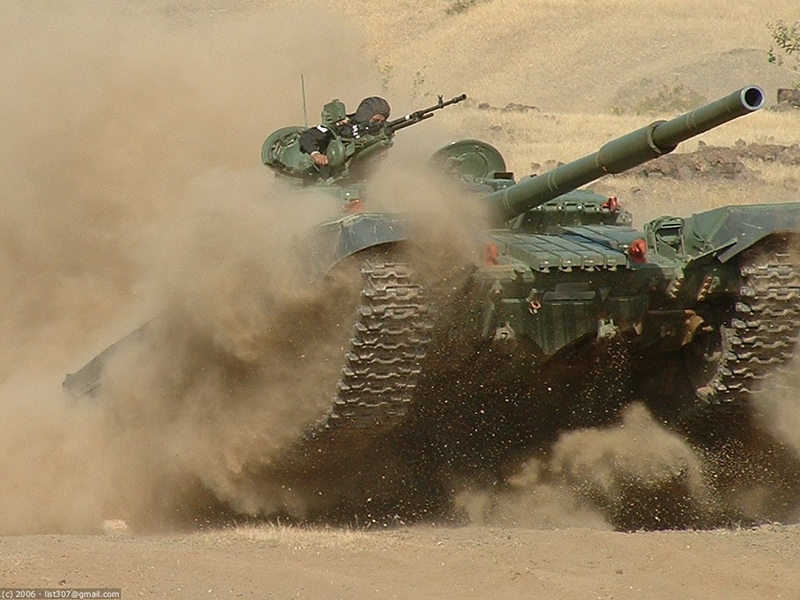 As an infantry machine gun NSV used in several types of plants. The most successful was the machine-Stepanova Barishev 6T7, gun on the machine called NSVS-12.7 (GRAU index - 6P16), weighed 41 kg, main gun was thus optical NGN production Novosibirsk Instrument Plant. There was also a series of night sights. machine production and acquisition NSVS produced at the plant in Vyatskiye Polyany. To repay the energy shot, weight machine gun was missing, so the machine has been equipped with 6T7 original shock absorber, mounted on the coulter front shovel, digged into the ground. Wherein the weight added gun entire machine mass. Rollback of this design was quite palpable, which it required to install the damper in the butt, installed on a machine gun sight "traveled" with him, so that the shooter involuntarily screwed up his eyes when shooting. Shooting has officially been provided only from a prone position, often set in the army machine gun kneeling, while he desperately "goats", since the shock absorber housed in a vertical position, about any shooting accuracy is not necessary to speak. shooting on 6T7 sector it was extremely limited, anti-aircraft fire was impossible. 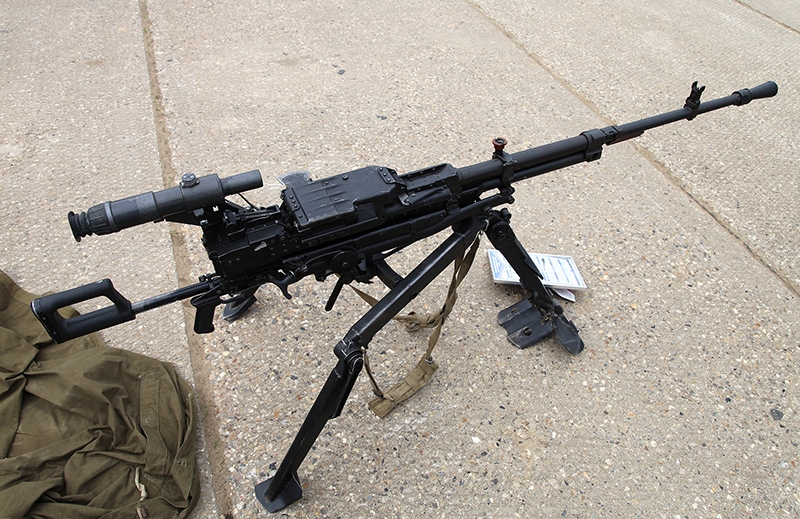 One of the main advantages of NSW - its versatility, ie the possibility of its use and on the ground, and air targets. Versatility tried to use, but at the same time setting gets too cumbersome, severe (one of them - 6U6 weighed four times larger than the machine gun), popular in the army did not use.

Already in the years of independence of Kazakhstan at the plant in Uralsk designed and manufactured several hundred machines, It is an attempt to implement the "universality" of machine gun. Took as a basis the construction of tank installations, when the gun when shooting moving on directing a kind of "bed". Tripod and "B" were isolated structure with quick-connection, sight mounted on a "bed", Tripod allows the installation for firing prone and kneeling. There were no practical way to secure pickup. Generally, despite the dampness design, shooting accuracy is not affected, shooter not screwing up the eyes, It is allowing to continuously monitor the results of the shooting, the impact of the return on his shoulder was much lower, than when shooting with 6T7, Arrows factory demonstrated in Kazakhstan Ministry of Defense landfill good accuracy, quick shooting as a transfer to the front, and depth. Gun on the machine called NSVP-12.7, Ministry of Defense of Kazakhstan officially took it on board and bought a hundred pieces. 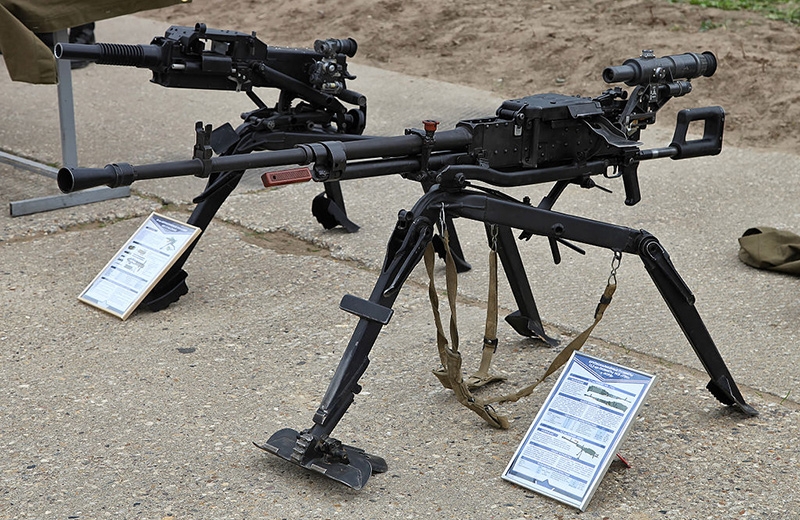 At the same time in Russia we have decided to abandon the purchase of guns abroad, albeit in friendly Kazakhstan. At the same time to start production from the original "raw" were not drawings, factory Degtyaryova actually designed a new gun, was named "Kord". Retaining the same landing sizes and ballistics for interchangeability with existing installations and machines, kovrovchane radically changed the barrel locking scheme. 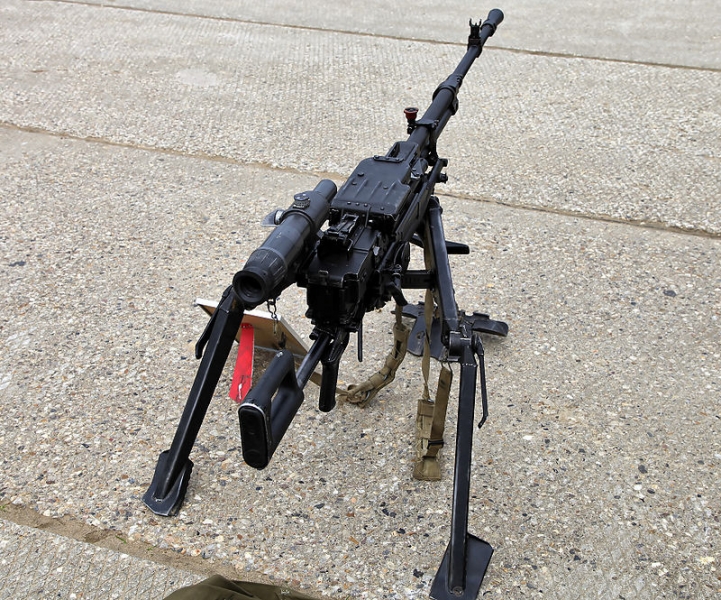 The first combat use of HCB was realized in Afghanistan. First time on both sides involved in the fighting took only modification DSHK (Mujahideen used DSHK Chinese production). But in the second half of the 80s in the armed forces appeared NCW. He was quickly appreciated, Its main feature was the possibility to conduct aimed fire on the enemy, not allowing him to a distance of effective firing a machine gun. There are photos of checkpoints, 6T7 where the machine is loaded with stones and sandbags for increased stability. Recruitment of each gun with an optical sight, and the embodiment of the night - and night sight, It makes a calculation NSVS main "eyes" roadblock.

Gun has a powerful acoustic impact on the calculation of, so the arrows were required to be replaced after an intense shooting. At least "favorite" NSW has been in the two Chechen campaigns. There were a lot of curious at first glance, "modifications" Tank "Bluff", that it was easier to get, for use as an infantry.

Algerian army servicemen celebrated, that "Cliff" smoothly operated at a temperature of 50 °, in the sand and mud. Military Malaysia successfully used a machine gun during a tropical downpour. 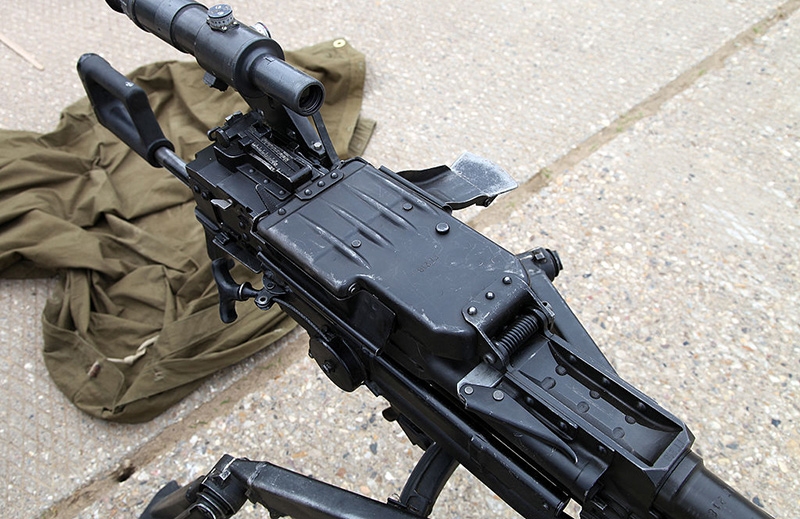 The performance characteristics of gun-NCW 12.7 Cliff

The dimensions of the machine gun NSV-12.7 Bluff 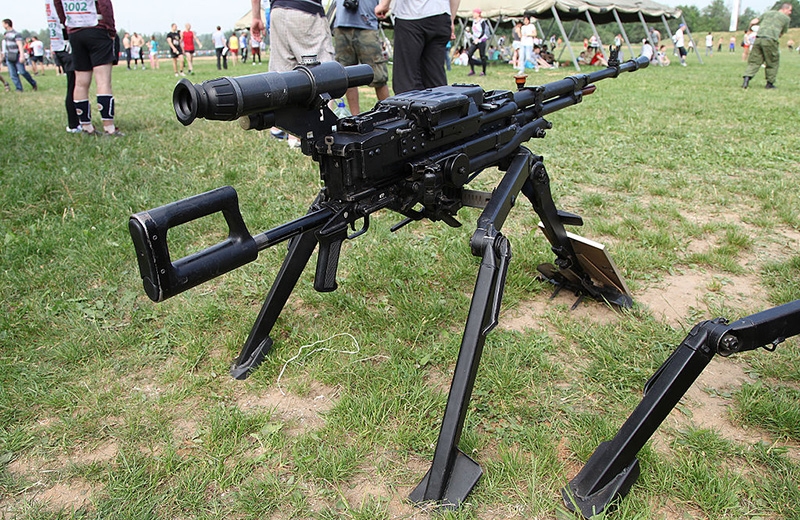 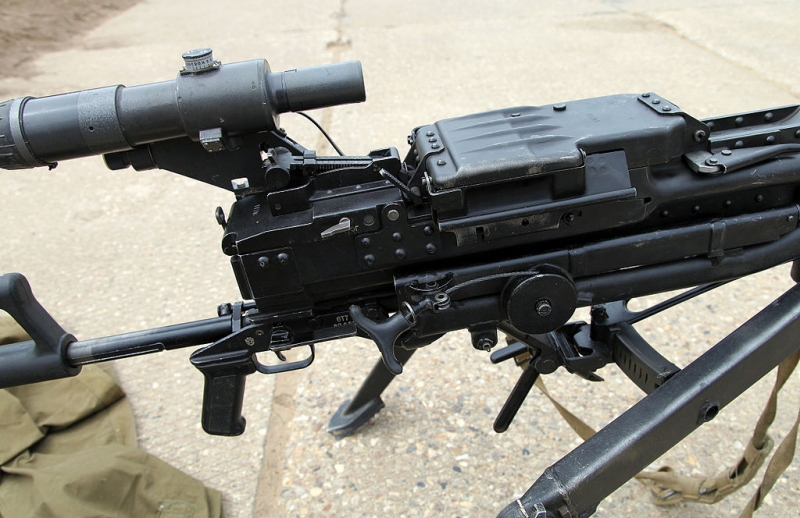 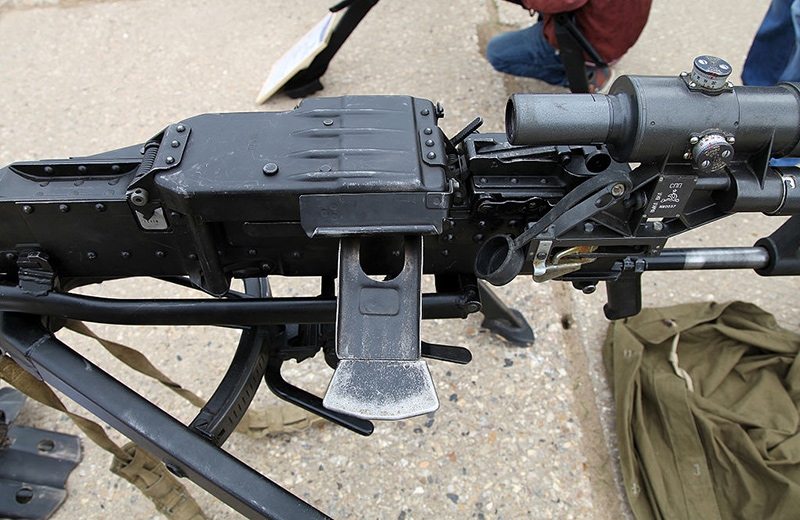 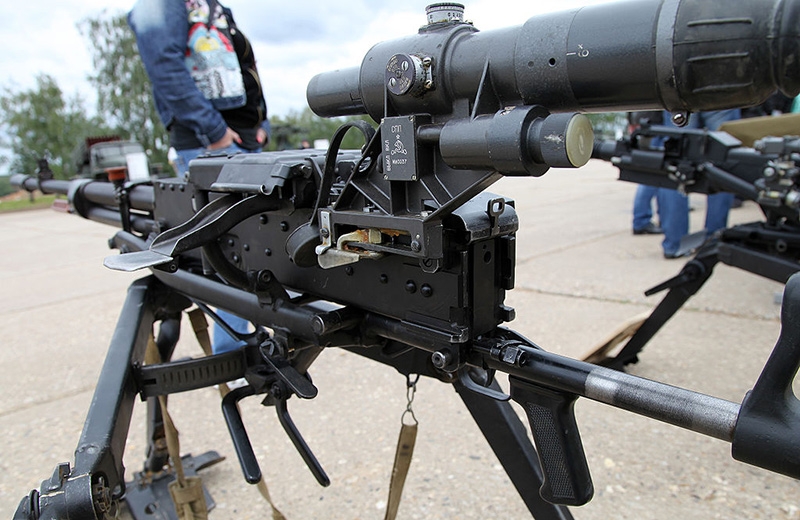 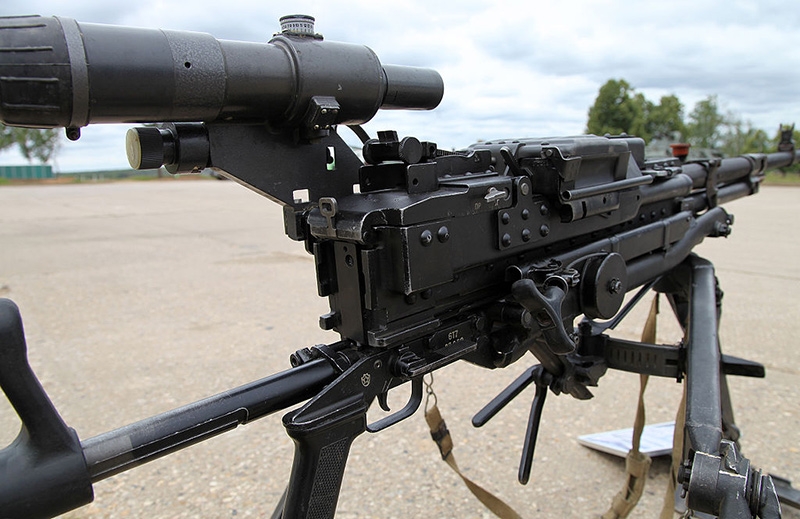 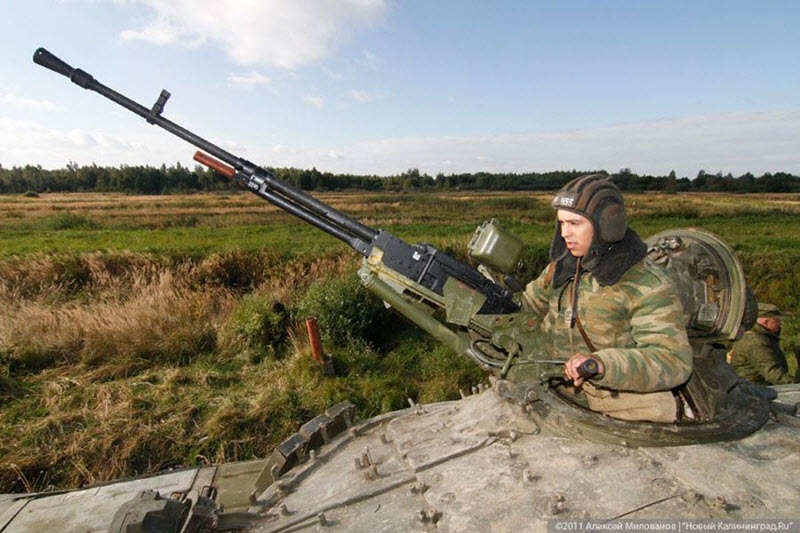 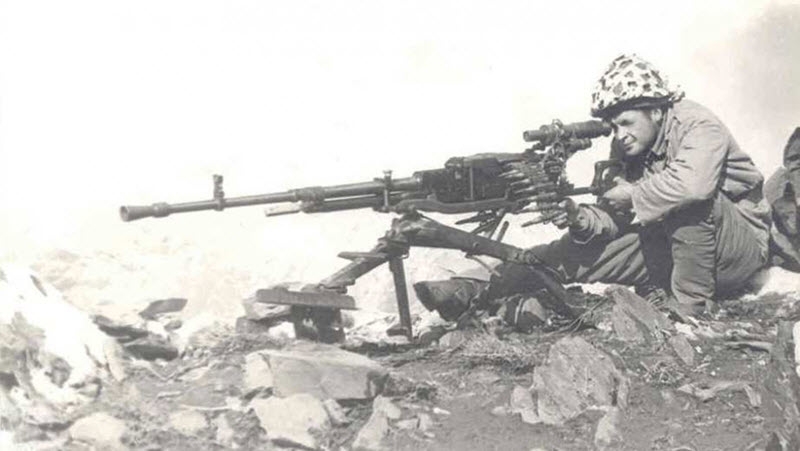 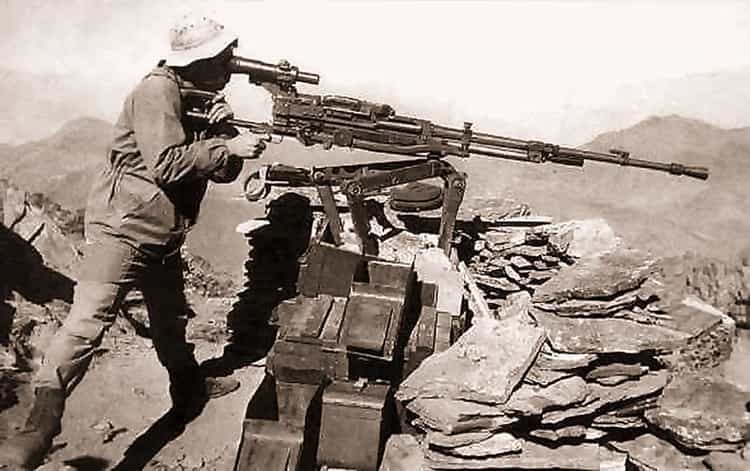 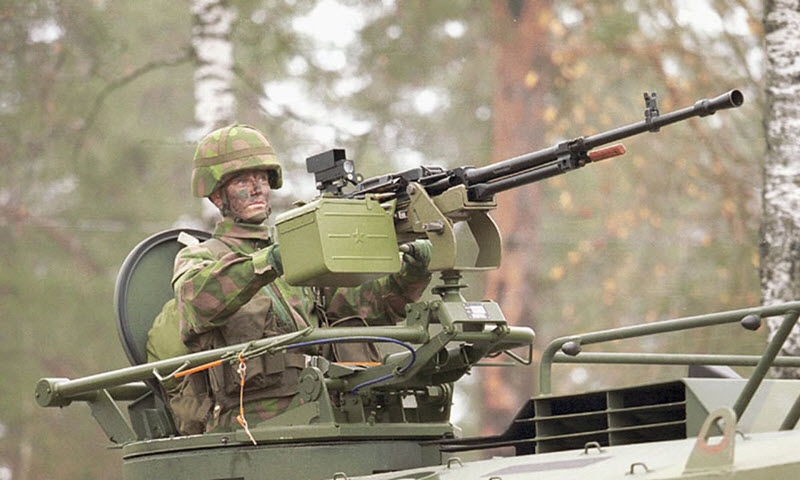 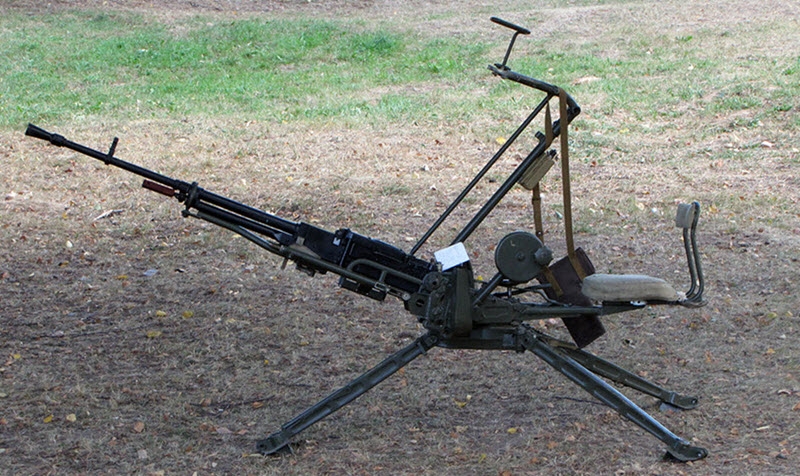 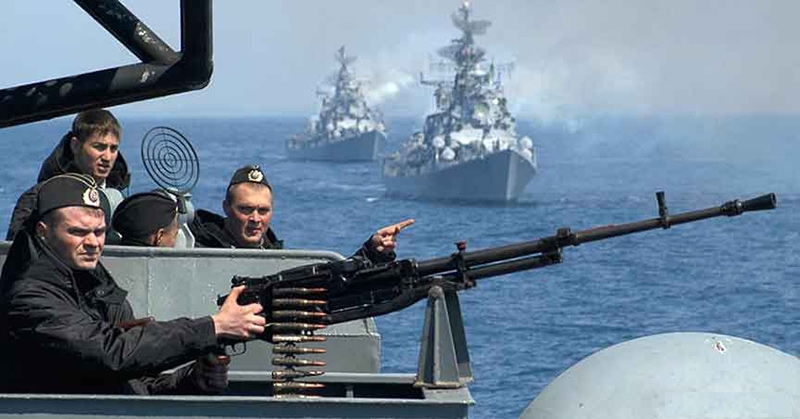 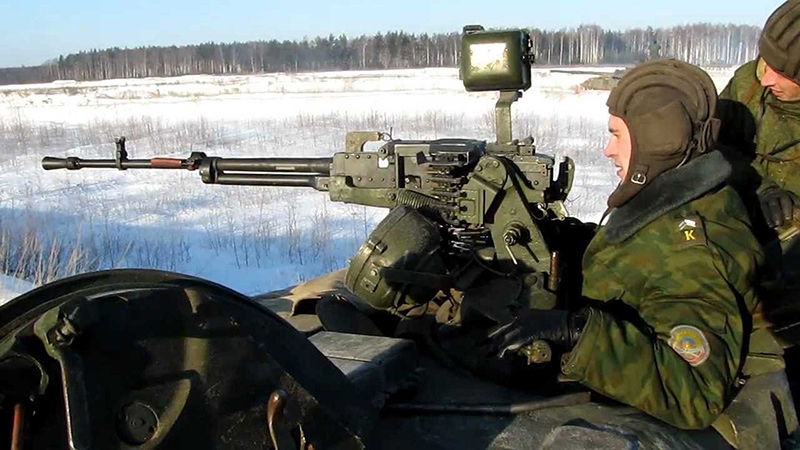 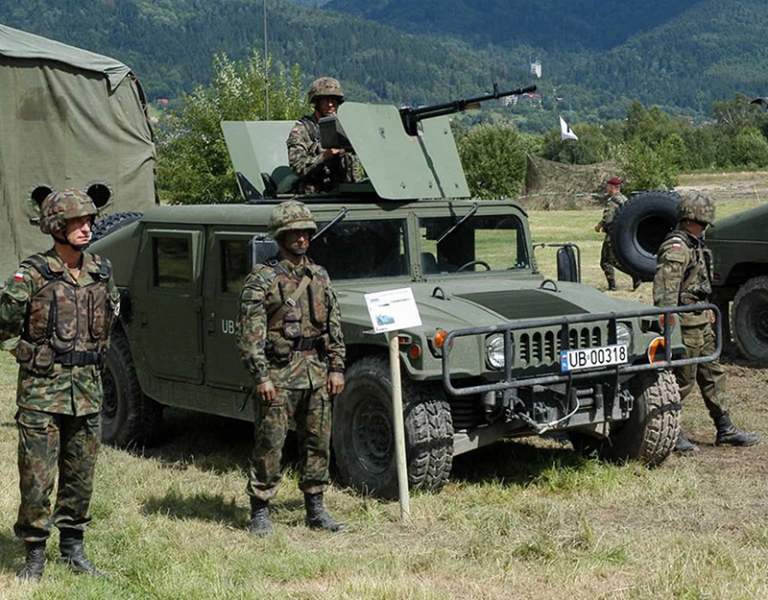 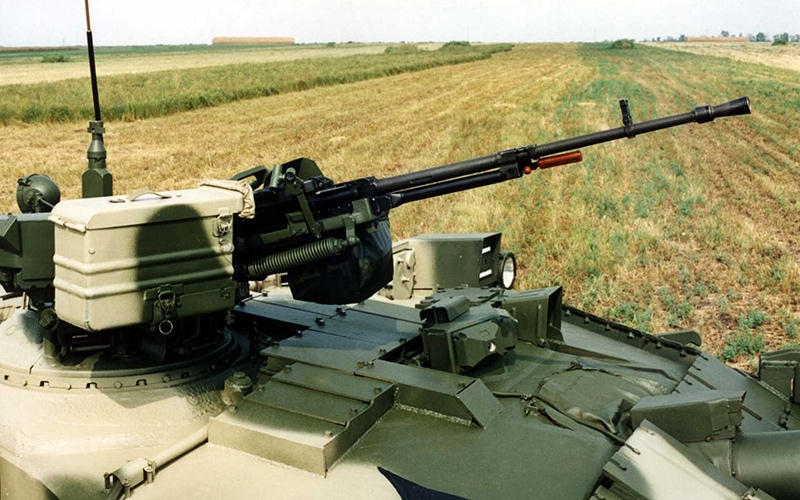 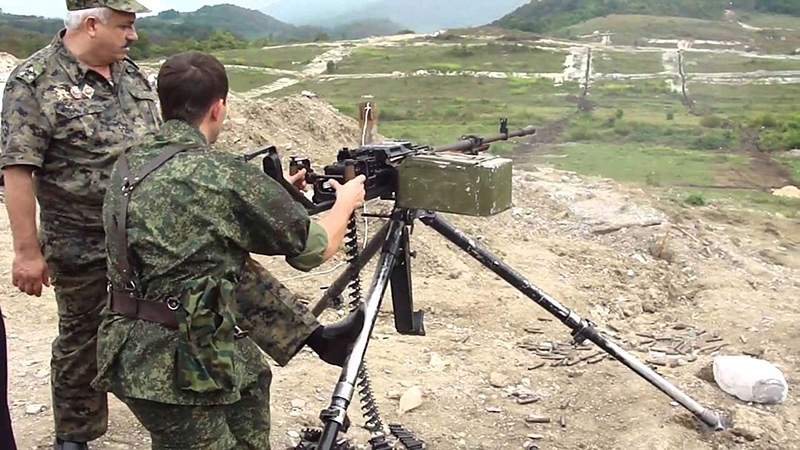