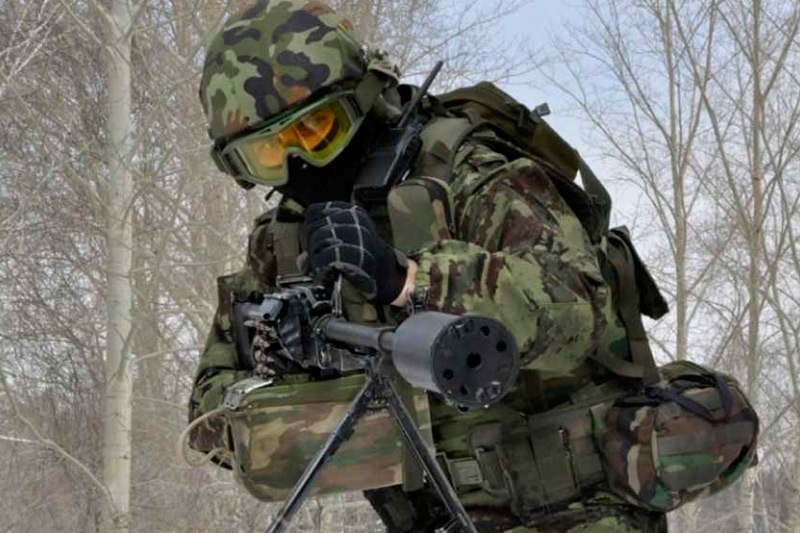 AEK-999 "Badger" - Russian general-purpose machine gun created Kovrov mechanical plant based on PTP cartridge under 7,62 × 54 mm R. The main aim of the development was to increase the firepower of weapons due to improved cooling of the barrel. Produced in limited quantities for weapons of special units of the Interior Ministry.

In the course of the domestic armed forces soldier in Afghanistan and Chechnya was able to gain enough experience for a change of views on the modern weapons. Tactical situation sometimes requires proximity, or even going beyond the recommended modes and weapons operation parameters. In particular, in this way we find out some disadvantages of manual machine guns RPK-74 and a single PCM. The first due maloimpulsnogo cartridge 5.45x39 mm was insufficient firepower, and second, having sufficient firing range, breakdown and killer action (7,62x54R cartridge), too basked. Constantly required to take breaks in shooting, and then change the barrel. What price had to be paid to calculations of machine guns and their departments for all, They know only the participants themselves fighting, but in the end command decided to make life easier for the machine-gunners. 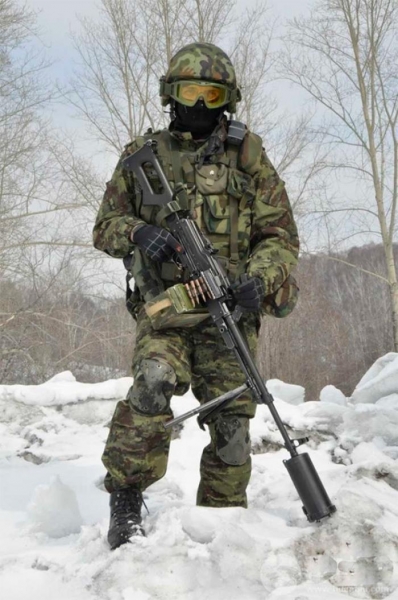 In the mid 90s the last century, the Ministry of Defense announced a contest to create a machine gun chambered 7,62x54R, having the same characteristics, as PCM, but a "heat-resistant". Besides, to facilitate the launch of new weapons to the series (It was not the best of times for the defense) required to achieve maximum uniformity of the new gun with available RMB. The competition involved two project companies - Klimovskii CRI Tochmash with his "Pecheneg" and Kovrov Mechanical Plant project with AEK-999 "Badger".

AEK-999 equipment was taken from the original RMB unchanged. Also, the new from the old machine gun crossed receiver, boepitaniya system and stock. Main characteristics, such as the rate of, We remained at the level of the prototype gun. All design changes were stem and related parts. Itself produced from the trunk of the new material. To improve the survivability decided to use the steel alloy, previously used only for the manufacture of automatic rapid-aircraft guns. Besides, changed trunk mount to the receiver.

From breech to about half its length placed longitudinally arranged fins, and on top of the barrel for the whole length of the metal added channel. Ribs makeshift radiator covered with a plastic forend, allowing to carry a machine gun was made possible not only by the handle. Also it allows you to shoot from the forearm AEK-999 from the hip, although due to the weight of the machine gun with cartridges is not easy, because even its own weight "Badger" is 8,7 kilogram. Innovations around the barrel resulted in the following improvements characteristics:
– increased length of a continuous line. Different sources put the figure at 500-650 shots;
– efficient cooling system has to give up a spare barrel;
– channel above the barrel does not allow the heated air to rise directly from the line of sight, eliminating the arrow from the "Mirage" and increases the accuracy of fire.

Also, the barrel can be set specially designed low noise firing device (PMS), designed to solve two tasks. At first, gun ceases to stun arrow (the bulk of the powder gases emitted only forward, that reduces noise, walking toward the soldier), and secondly, PMS provides a disguise - a distance of 400 to 600 meters from the gunner's position, depending on terrain and other conditions, the sound of the shots almost audible. Besides, when using night sights flame, are pulled out of the barrel, It does not interfere with the normal target acquisition. In the first photo, which became known to the public, "Badger" was captured with PMS on the trunk, because of which there was a rumor of the muffler in the environment lovers weapons, structurally associated with the barrel, as, eg, at ARIA rifle. However, low noise firing device if necessary can be removed and replaced with a standard flash hider RMB. 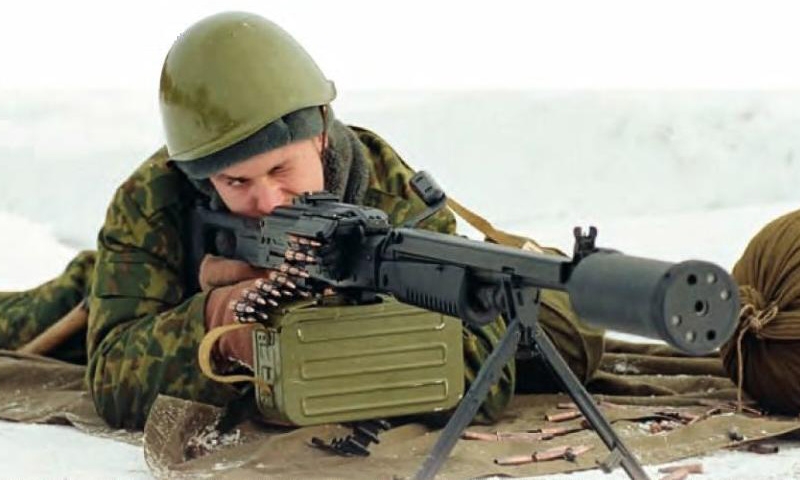 Often gunners noticed an uncomfortable design bipod on RMB. Designers-kovrovtsy considered it equipped with 'Badger' changed bipod. After appropriate investigations bipod moved further away from the barrel, a support structure changed so, so that it is less impact on the balancing of weapons. As a result, the bipod are not only durable and comfortable, but also improve the accuracy of hits.

AT 1999 , the beginning of the comparative tests "Badger" and "Pecheneg". According to them the result of the Ministry of Defense has chosen for adopting a gun CRI Tochmash, and Kovrovskaya interested in the development of the Ministry of Internal Affairs. For military trials in the special forces was made a small batch of AEK-999. However, soon after that arms production at the Kovrov Mechanical Plant has been minimized and the mass production of "Badger" has not gone. Precise data on the number of AEK-999, are currently in operation there, but there is every reason to believe, what, least, the bulk of them are already worn out. 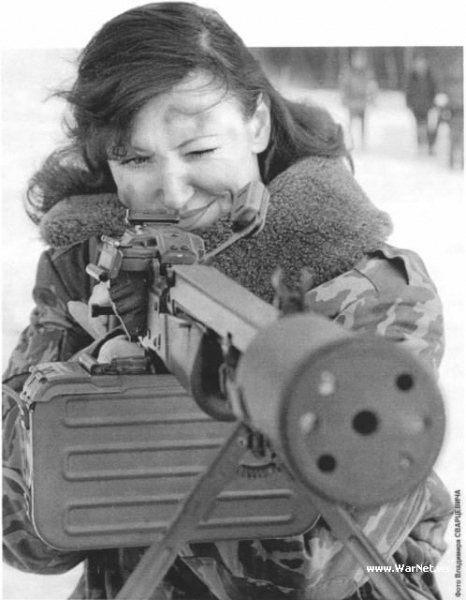 The performance characteristics of AEK-999 Badger 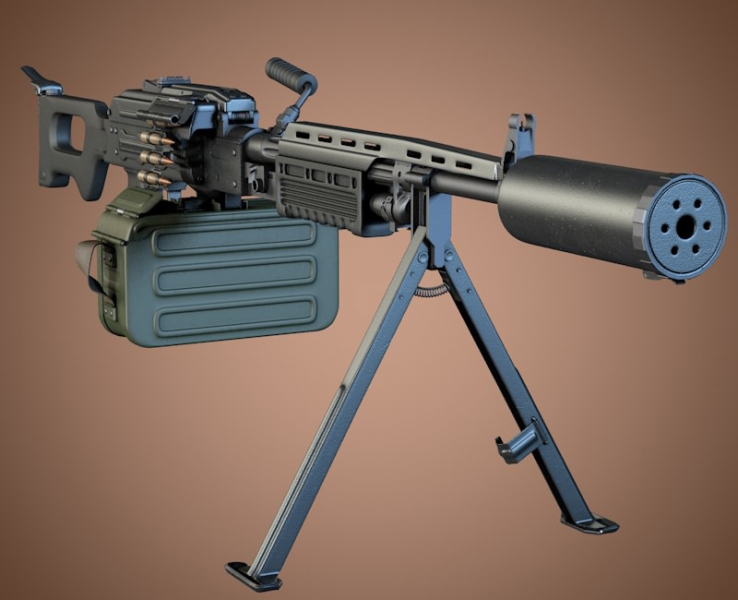