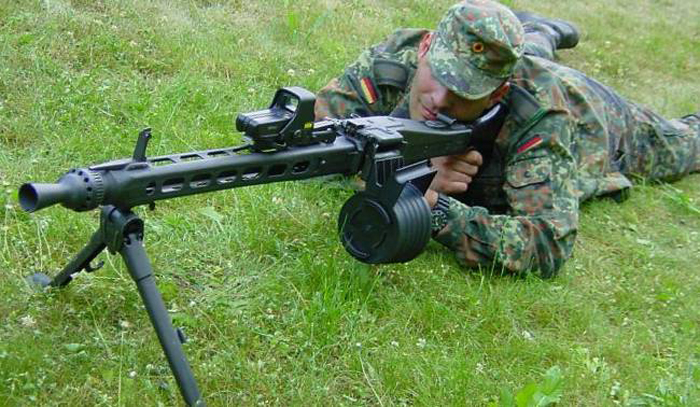 During the early years of the Second World War in Germany it was developed a universal machine gun model 42, He became a regular army weapons. conditions were created, to serial production used the labor of a small number of specialists and applied simple handling equipment, and, to the time required to manufacture machine guns were small.

This weapon can be used to fry as a manual, on tripod machine - easel, with a special gun carriage - anti-aircraft machine gun, installed on vehicles. After World War II it was delivered in the armies of many countries. First of all, they were treated the country, formerly occupied by German troops, as France and Yugoslavia. In Yugoslavia, this weapon was produced under the designation of the universal machine gun model 53. 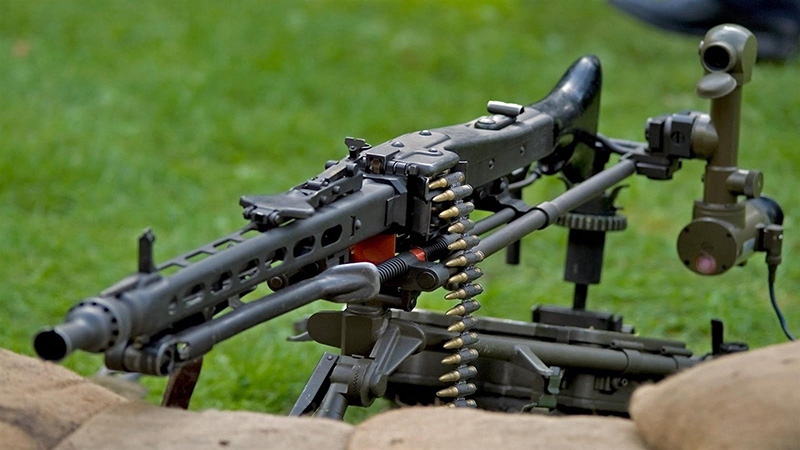 Already in 1942-1943 years in the United States have attempted to copy the model of the universal machine gun 42 and convert it to fire bullets .30-06 size 7.62×63. But since just could not do that, attempts have been stopped. In the fifties, the firm Rheinmetall finalized a weapon for firing rounds of NATO standard 7.62×51. FROM 1968 year this weapon, newly modernized, serially produced by this company under the symbol MG 3. There are very conflicting information about the history of this gun. correspond to reality, Most likely, the following events. 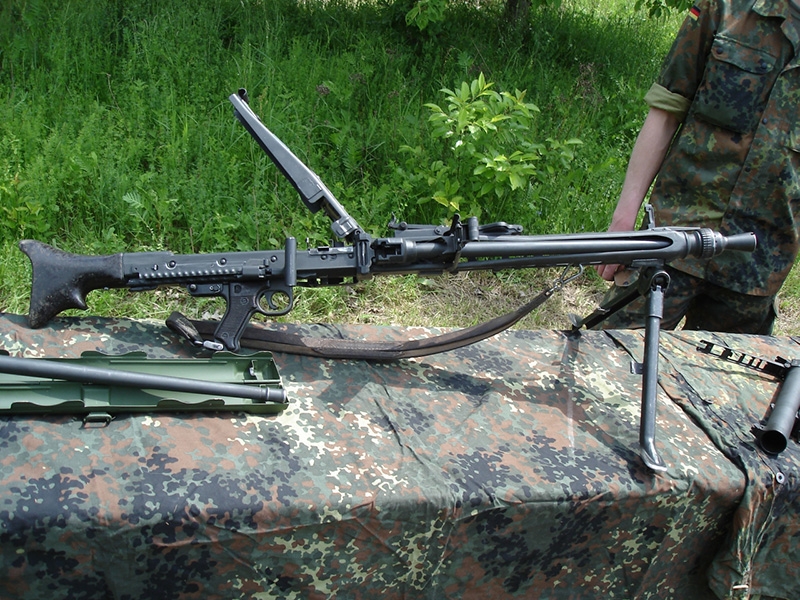 A short time after the war, with the consent of the US, British and French occupation authorities in the territory of modern Germany were set up militias, consisting of Germans. These units were called business units and industrial police. They were armed with machine guns, universal model 42, which were made during the war and were intended for firing rifle cartridge 7.92×57. These guns were also transferred later to equip border troops and the armed forces of Germany, under the designation MG 1. After a 1959 the firm in Düsseldorf began producing cartridge NATO standard, weapon received the designation MG 42/59. Under this designation, it was delivered by the army and police not only in Germany, but also exported to many countries, including in Chile, Denmark, Italy, Nigeria, Austria, Pakistan, Saudi Arabia and Spain. 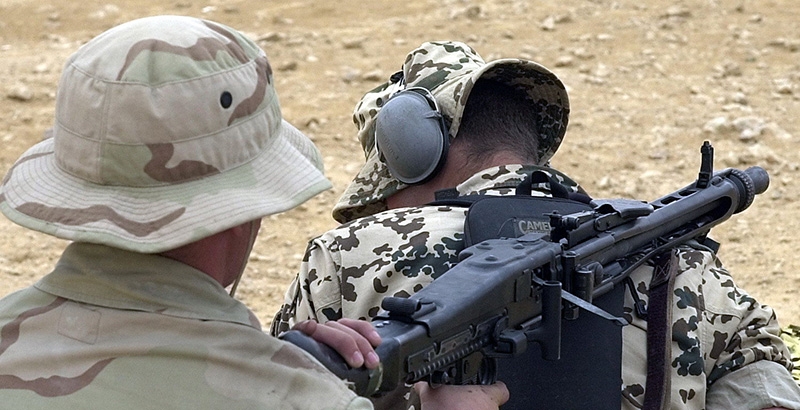 In order to distinguish between guns, produced during the Second World War, from the post-war production, all weapons of this caliber model 7,62 mm was termed MG 1 A1. The new NATO standard caliber machine guns officially awarded the title of MG 2, but unofficially the habit continued to use the old name of MG 1. It is necessary to clearly distinguish between versions of MG 1 A1, MG 1 A2 and MG 1 I. The first version was intended only for shooting ammunition belts on 50 DM type cartridges 1, made in Germany. Weapons version MG 1 A2, Besides, could use an American M-type belt 13. Machine guns MG version 1 A3 have been slightly modified. 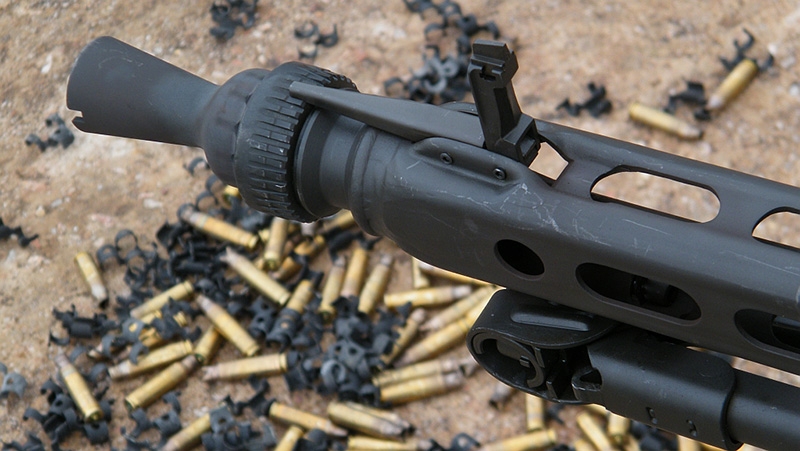 This upgrade weapons later served as the basis for further development of the machine gun MG 3, manufactured by Rheinmetall. The weapon is a regular machine gun infantry and tank battalions of the German armed forces as well as on a large scale for export to Chile, Denmark, Iran, Italy, Norway, Austria, Pakistan, Portugal, Saudi Arabia, Spain, Sudan and Turkey. Firms in some countries (Greece, Italy, Pakistan, Portugal and Spain) Rheinmetall received a license to manufacture these weapons. Action automatic universal machine gun model 3 based on the use of the recoil energy, weapons have movable barrel with a short stroke and a roller shutter. The castle belongs to the open type: the valve is in the rear position and is held there by a trigger, if not by firing. 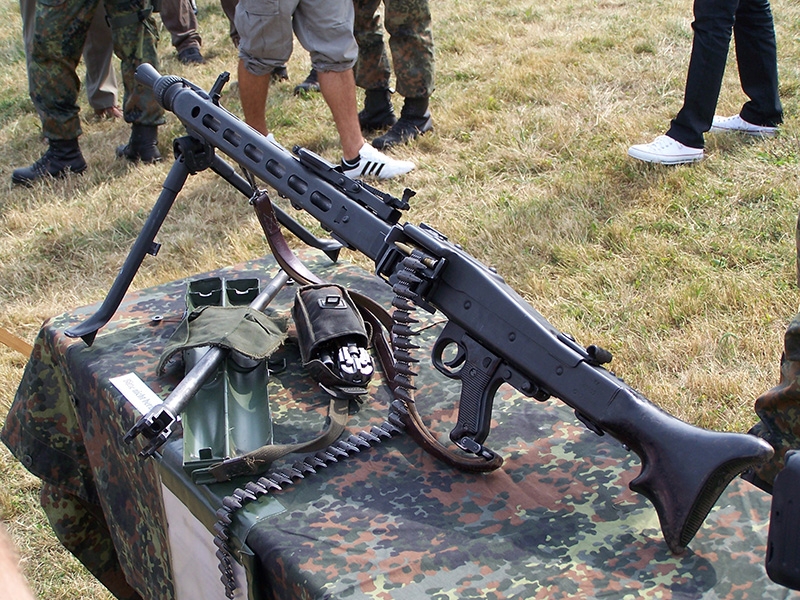 The cartridges are fed from the left side of the tape. It can be produced in the German metal bands DM 1 or disintegrating belt DM 6, which are standard ribbons, used by the armies of many countries, and tape, which correspond to this type of. for example, shooting produced in Germany training cartridges 7.62×51 - type DM 28. weapon housing is manufactured on modern stamping method. Front guide sleeve is, which is screwed onto the muzzle brake. The return spring is a gate in the rear part of the housing. The trunk is removable and is available in two versions. By opening mechanism aiming refers folding sight, which can be installed at a distance from 200 to 2200 m increments 100 m. The maximum effective range of fire - 3750 m. 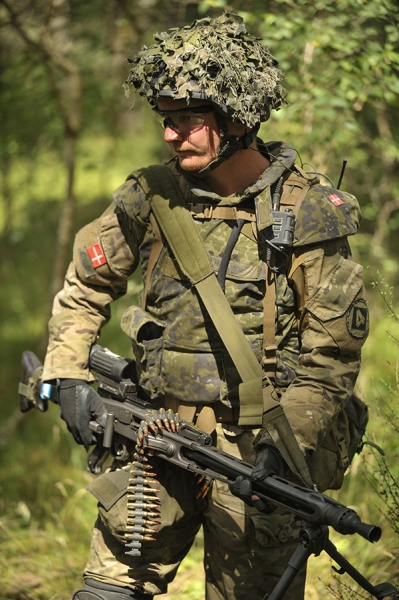 The thickness of the gun is 130 mm, height with sight unfolded - 215 mm, with a folded eye - 205 mm. Barrel length with a locking device and an amplifier is the recoil 565 mm, without locking device with amplifier return - 530 mm, the length of the trunk - 475 mm. The machine gun can also be used for firing from armored vehicles, and when equipped with coaxial machine - as a weapon of defense against targets, low-flying. weapon, installed on vehicles, It has no butt, and designated as a machine gun model 3 A1 (MG 3 A1).

The standard weapon is equipped with a removable folding bipod. Besides, It exists for use of the Army so-called tripod machine Field. Mounted on a support gun has hit scattered over a large area targets at a distance 1200 m. Besides, using machine guns, installed in the field machine, It can be carried out fire cover its own departments. Weapons protected against dust, and worn or damaged components can be replaced quickly. Nevertheless, this machine gun, consisting of 230 individual parts, It is a fairly sophisticated weapons. Although the practical rate of fire is about 250 rds. / min, ammunition consumption is very high. 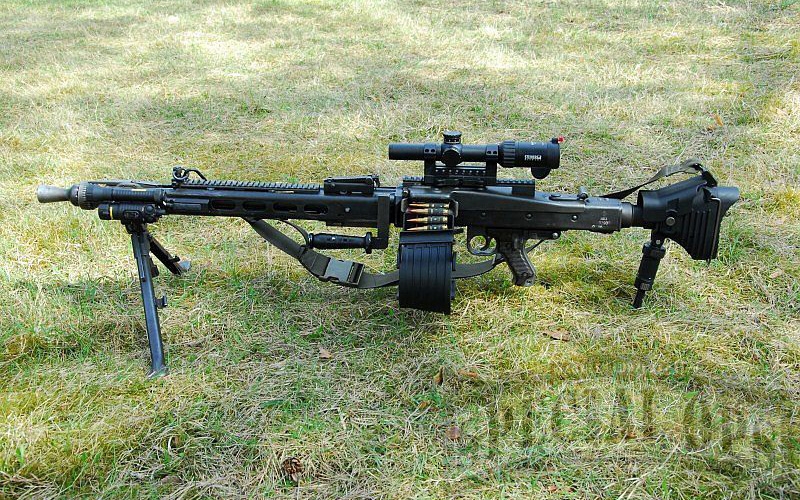 The dimensions of the machine gun MG3 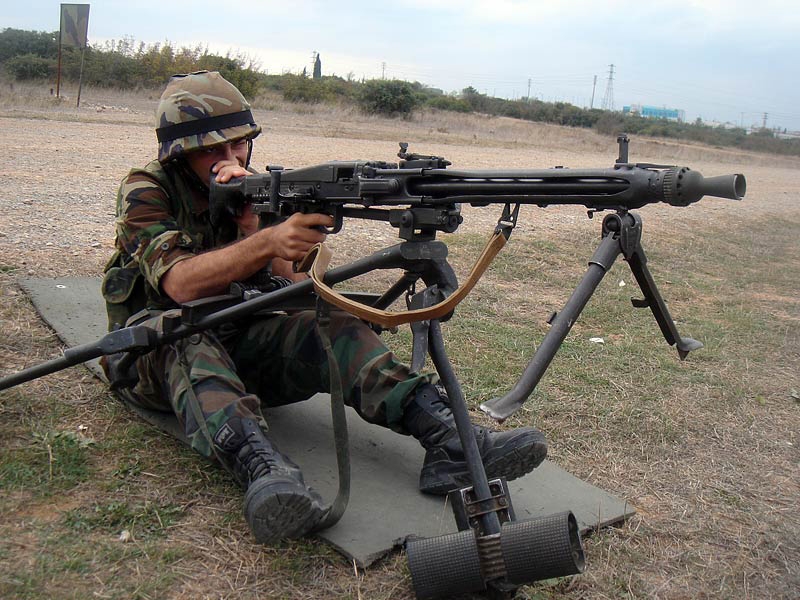