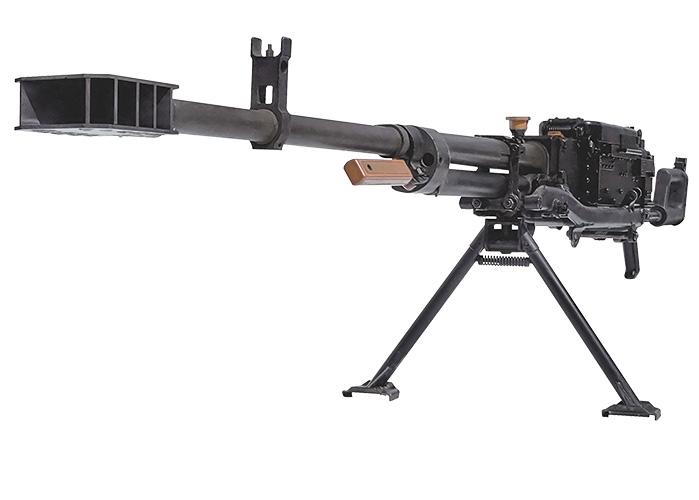 Russian large-caliber machine gun "CORD" - machine gun with a cartridge belt feed under 12,7 × 108 mm, developed by JSC "Zavod. VA. Degtyareva "- one of the leading Russian defense enterprises with many years of experience and tradition. The plant is one of the 200 Russia's largest enterprises. Civil and defense products with "ZiD" brand exported to dozens of countries around the world, successfully demonstrated on the major national and international exhibitions and fairs.

"Kord" created as a replacement machine gun NSV-12.7 "Cliff" after 20 years of use in the army revealed shortcomings, in particular, accuracy of fire is no longer in line with modern requirements. But the main reason for the creation of replacement was the fact, that the production of machine guns NCW after the collapse of the USSR left the territory of Ukraine and Kazakhstan. In SKB Kovrov plant them. Degtyareva (WALL) work on modernization of machine guns NCW in the 1990s engaged in AA. Namitulin, NM. Oʙidin, YM. Bogdanov and VI. Jiryohin. The new gun received cipher "KORD" (heavy weapons degtyarevtsev), new barrel with an effective muzzle brake, flash suppressor and modernized locking system.
After upgrading the machine gun became easier, convenient, corrected lateral movement interfering with the shooting. "KORD" passed extensive tests and was ready for serial production in 1997 year, officially adopted by the Russian Army. Furthermore embodiment infantry, it is installed in the installation of the tower antiaircraft Russian tank T-90. 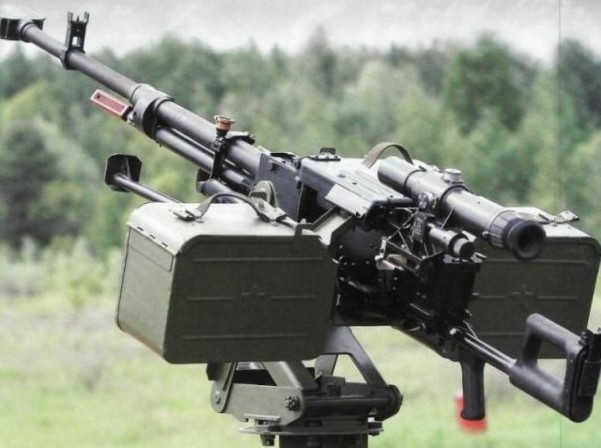 The machine gun is designed to deal with lightly armored targets and firepower, destruction of enemy personnel at ranges up to 1500-2000 m and destroy air targets at slant ranges up 1500 m. In boekomlekt are 12.7 mm rounds with armor-piercing incendiary and armor-piercing incendiary tracer bullets. main ammunition, claimed "ZiD" are B-32 and BZT-44. In the same time, obviously, machine gun bullets can use MDZ (incendiary of instant action) and BS (armor-piercing incendiary BS-41). The latter has a bullet with a tungsten core, which greatly improves armor. If the bullet B-32 breaks 20 mm steel with 100 m, the bullet cartridges BS and the BS-41 does the same thing with the distances 750 m. Equipment used for metal link belt.
12,7-mm machine gun "Kord" - an automatic weapon with a belt feed (feeding the tape may be left as a, and right). quick-trunk, air-cooled, created by proprietary technology ZIDovskoy, providing uniform heating during firing, and therefore - and uniform thermal expansion (strain) trunk. As a result, accuracy compared to NSV is increased in 1,5-2 times when firing from the machine (when shooting with bipod accuracy comparable). As a result, when shooting at a distance 100 m circular deviation is only 0,22 m. 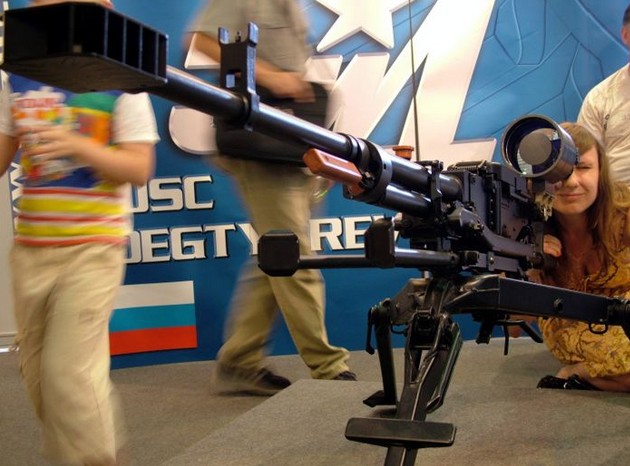 The machine gun is based on vapor automation. Locking barrel - wedges. The trigger mechanism has a safety lock against accidental firing and can be controlled manually (the trigger, installed on the machine), and from the electric trigger (for tank version). As the main outdoor use adjustment Sight. You can set the optical and night sights. Reflector cartridge cases pivotally mounted in the slide frame and throws it forward (6R49, 6P50, 6P51, 6P50-1) or down - right (6P50-2, 6P50-3).
Analysis of the application of machine-gun complexes caliber military action end of the last century showed, that the action directly in combat formations of infantry their weight should not exceed 40 kg. Besides, It revealed the need for a single 12.7 mm machine gun, which can be used both on automotive, armored vehicles and helicopters, and after removing them in combat formations of infantry. 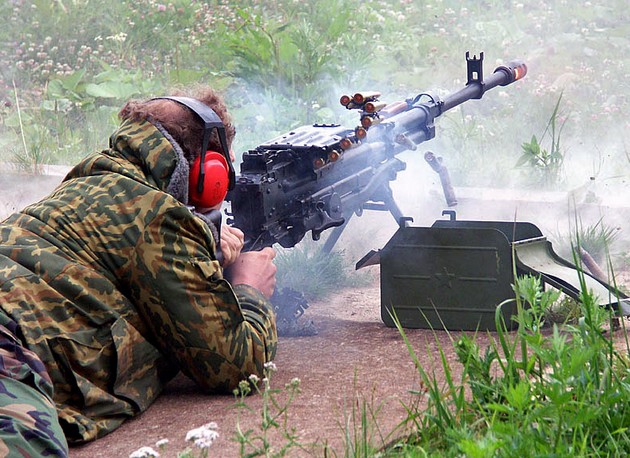 Gun "Kord" - a heavy machine gun the first in the world, which can fire a bipod, and, if necessary, even with hands. At the moment, it is the lightest full-caliber machine gun 12,7 mm. Browning M2 Heavy Barrel has a weight (on tripod machine) 58 kg and even gun body itself weighs 38 kg - more than 20 % heavier, than "cord" on bipod.
Shotgun XM312, being lighter, "Korda", It can not be considered a full-fledged fighting machine gun caliber of its due rate of 260 rds. / min (4,33 rds. / sec, or 207,84 g / s against 520 g / sec in "Korda"). Weight characteristics of a machine gun "Kord" allow to raise the issue of the replacement of Kalashnikov machine gun platoon in the unit of a machine gun caliber 12,7 mm, given the fact, that the weight of the new national gun "Pecheneg" chambered 7,62x54R (8,2 kg bipod) allowing them to arm small branch instead of the PKK or PKK-74. 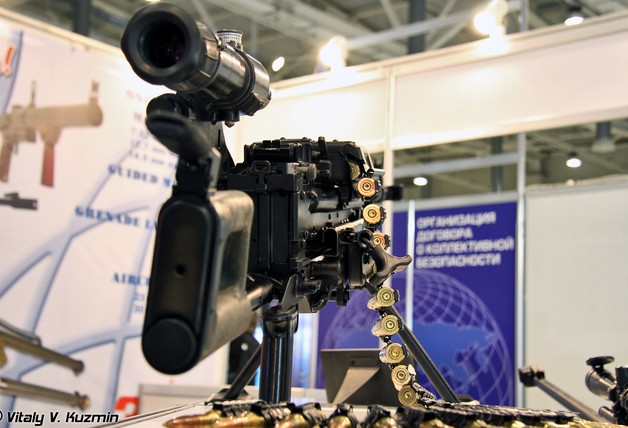 In the course of creating a machine gun developers managed to solve the three major structural problems:
- reduce the impact of automatic mechanisms on the barrel, which allowed to exclude its resonant vibrations and significantly improve the accuracy characteristics of the machine gun;
- to reduce the recoil energy and improve stability gun, which provided an opportunity to develop variants of an infantry machine gun "Kord" caliber on bipod;
- significantly improve barrel life and enable complete automatic weapons caliber one barrel. 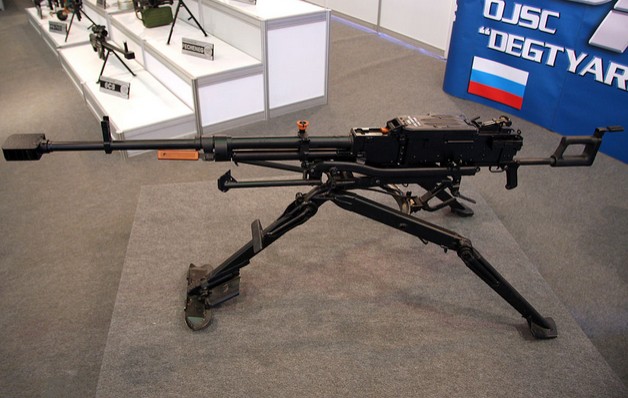 Quality of technical solutions, used in the construction, and high manufacturability provided machine gun "CORD" high performance combat and. From their counterparts gun "Kord" is different:
- a high reliability of operation at ambient temperature ± 50 FROM, in dusty conditions, after immersion in water, without cleaning and lubrication, icing, as well as other adverse operating conditions;
- uptime and the ability to conduct intense fire without additional cooling of the barrel retaining the aiming accuracy;
- stability accuracy, the accuracy and rate of fire of battle during the entire service life of the sample operation;
- serviceability gun and the ability to eliminate a number of faults directly in the combat use of forces calculation using individual spare parts, and maintainability gun in military terms with the group and replacement of spare parts.

An important characteristic and feature attractive forces for "CORD" gun is the similarity of its mass and dimensions and characteristics with mating gun "cliff". It provides a replacement for the latter in all machine-gun weapons complexes without additional technical work provided, that "CORD" by far exceeds its main characteristics. Analysis of the application of machine-gun complexes caliber military action end of the last century showed, that the action directly in combat formations of infantry their weight should not exceed 40 kg. Besides, It revealed the need for a single 12.7 mm machine gun, which can be used both on automotive, armored vehicles and helicopters, and after removing them in combat formations of infantry.
Included with the machine gun mount and desk "CORD" with bipod can be installed on any car and armored vehicles, helicopters, boats and ships, railway platforms and to ensure aimed fire. If necessary, it can easily be removed with a machine gun and used directly in combat formations of troops to provide fire support in any kind of fighting. 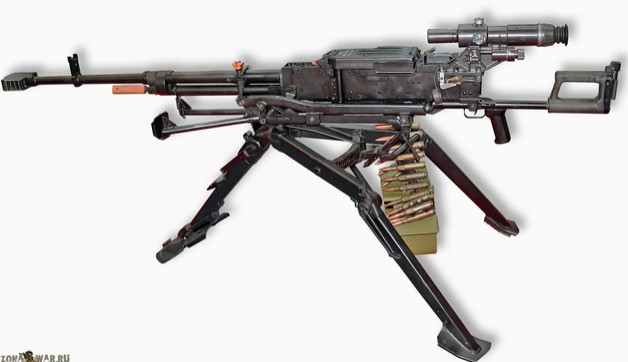 Construction machine gun when placed on arms facility secures cartridge boxes on swinging of the unit, fixation machine gun "stowed on", collect shells or their reflection (forward or down-right), collecting belt links, relatively rapid displacement gun installation to its location within the vehicle of the hatch, doors, etc.. "KORD" ensure the maintenance of effective fire both prepared, and with unprepared firing position, as well as from buildings, still or moving vehicles at any position of the arrow. In this case, the relatively light weight of the complex and the ability to quickly transfer machine gun from traveling to combat allows you to easily change the calculation emplacements. this, in its turn, increases its survivability, suddenness and effectiveness of impact on the target.
Currently widespread 12,7h99 mm rounds of NATO standard, due to the large number of producers - about 22 nations. In view of this factor it was developed 12.7-mm machine gun "Kord" under NATO cartridge for all variants of its performance, mentioned above. In this tactical and technical performance of the gun under 12,7h99 mm NATO cartridge similar machine gun "Cord" with the structural differences between the barrel and the feeder. 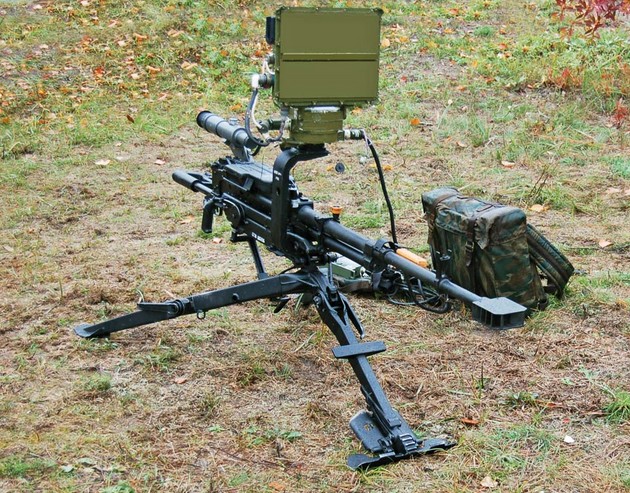 6R49
, electric tank variant 6P49. Dimensions : 1625h136h215 mm, weight 27 kg. It is a basic embodiment using a machine gun. It comes with electric trigger and is designed for installation on armored equipment facilities to combat low-flying targets, destruction of lightly armored and soft-skinned materiel and armament, as well as clusters of enemy personnel. 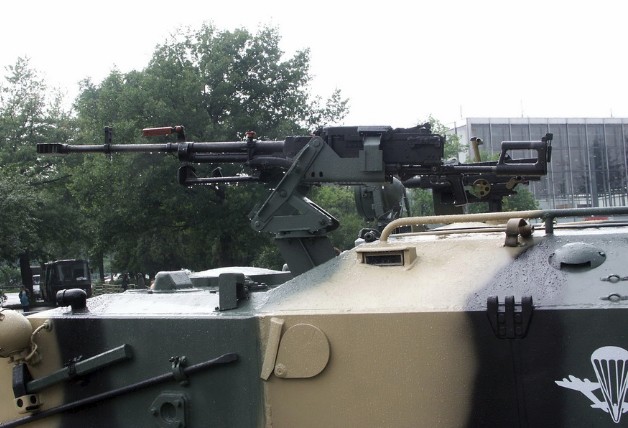 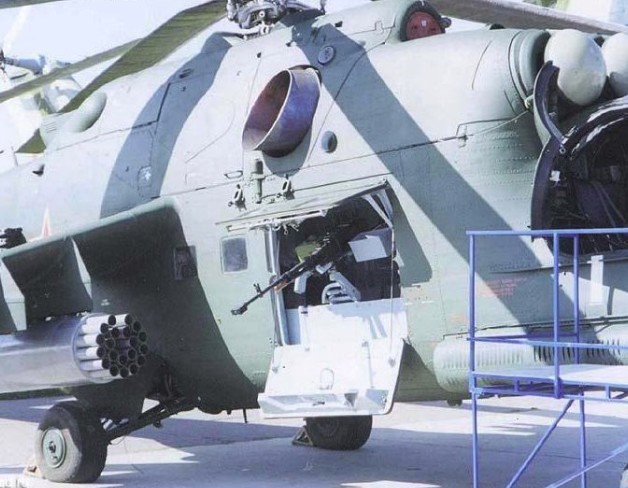 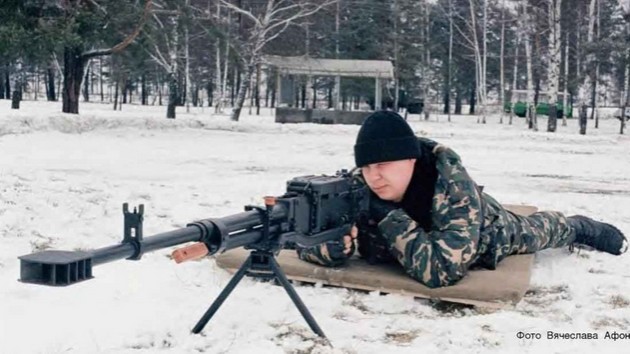