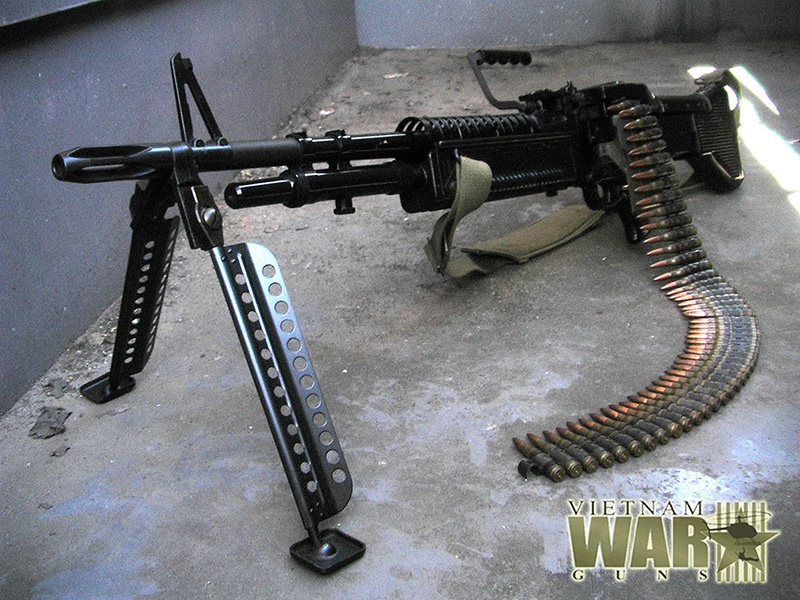 M60 (the official designation - Machine gun, 7.62 mm, M60) - American general-purpose machine gun, developed in the postwar years, and adoption of the Army and Marine Corps 1957 year. For design flaws and appearance earned him the nickname the English. the pig - «pig».

Despite, that since the 1980s began M60 displacement process more sophisticated machine guns, such as M240 Belgian design, these weapons are still produced and is widely used, though preferably to "supporting parts".
In terms of design it is essentially a hybrid of the two systems, the German development of the Second World War - automatic rifle FG-42 (Automatic reloading with a gas engine) and machinegun MG 42 (paper tractor mechanism). The main manufacturer - the company Saco Defense. 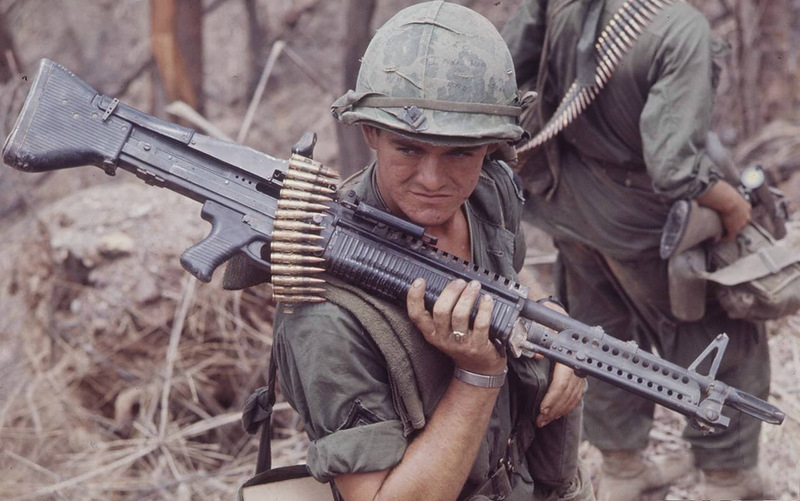 During the Second World War, the American infantry and never got adopted a successful model gun; available at the machine guns armament, in particular - Browning samples 1917, 1918 and 1919 and Johnson's sample 1941 of the year, were either much older, or just bad samples. Especially great was the interest, with which the US military was looking at the latest German developments in this area (however, as well as other countries in the army, faced with the war machine of the Third Reich). In the pre-war years in Germany, the concept of a "single" machine gun was set up, suitable both for the role of the hand, and shooting with a wide variety of machine-installations. During the war, in accordance with her machine gun MG was created 42, at the time the former a sort of benchmark for this type of weapon. 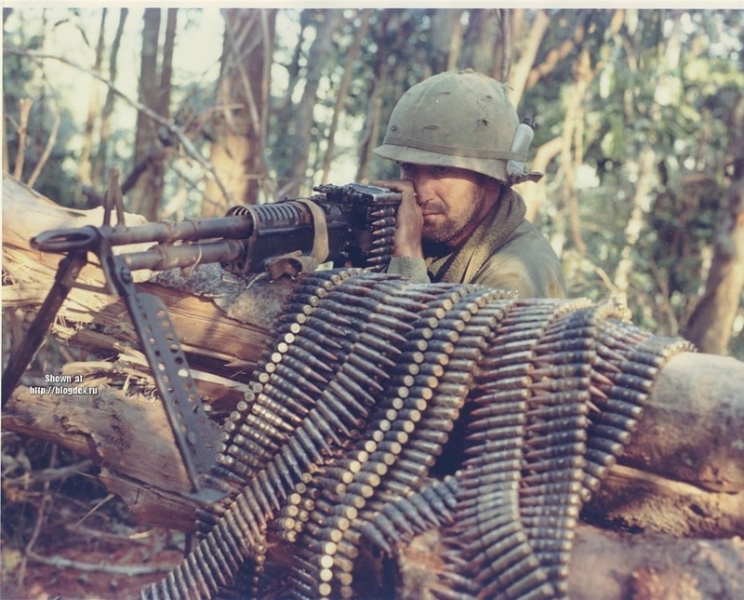 Besides, adopted a "rifle paratrooper" on arms airborne troops FG-42 (despite the similarity indices MG 42, It was quite different in design weapons), which is basically a shooting bipod with light machine gun, which could also be used as a self-loading rifle. Both samples were aroused attention of the US military.

Even before the end of hostilities held until the release of the war of auto parts for General Motors Company Saginaw Steering Gear MG attempted conversion 42 under American Standard rifle and machine-gun cartridge 7,62 × 63 mm, but they have failed because of the significant difference in the size of ammunition (American patron was much larger, German than 7.92 mm).

After the war, the Americans, having carefully studied the German experience, begun to create their own "single" machine gun, wherein as a starting point it was taken just mentioned above MG 42 и FG-42. 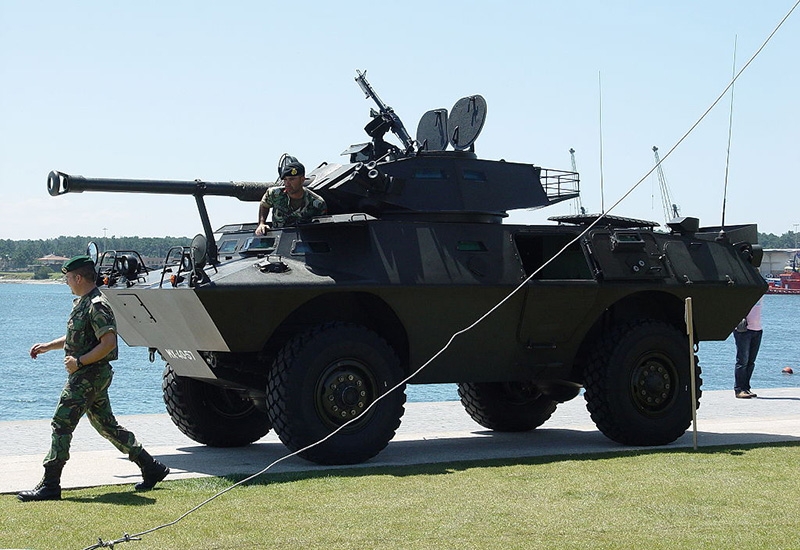 The first prototype was introduced in 1946 T44 year under the same 7.62 × 63 mm, by FG-42, he inherited all the work automation, in particular - the gas engine with the lower piston arrangement and the pivot bolt, the mechanism feeding the tape was copied from MG 42, with the only difference that instead of its horizontal movement was vertical, down up, and he tape drive located on the left side of the slide box - it was a direct legacy of FG-42, whose shop is on the left (According to available information, there was also more German prototype FG-42 with a similar belt feed).

In connection with future adopting new "reduced" cartridge 7,62 × 51 mm NATO (T65) at 1948 , work on the T44 were discontinued, although further development for some time still carried out under the old munitions. The new prototype, T52, It was in development with 1947 by 1952 year. By vertical movement of the tape in it have already refused, leading tape drive layout into full compliance with MG 42. 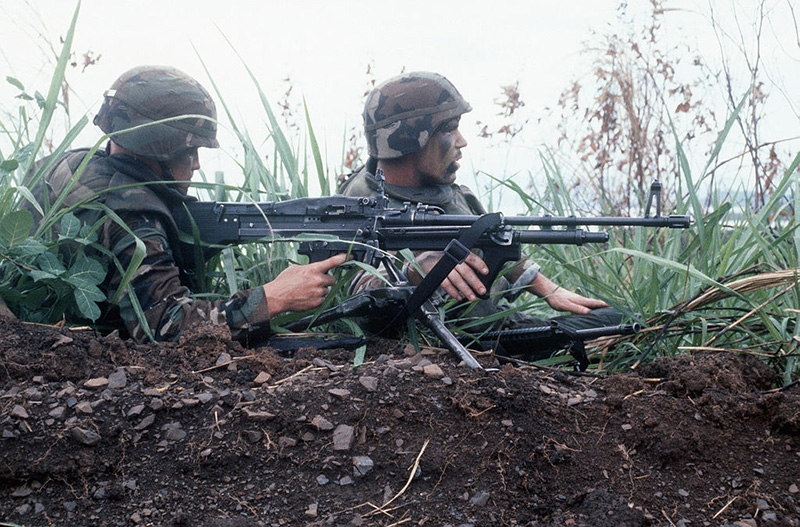 After 1952 year work continued on one of its variants - T52E3, but under a different designation - T161. These models are outwardly indistinguishable from each other, The difference is in the production technology, - T52 and its modifications were produced at the plant "Bridge" in Philadelphia, T161 at "Inlend" in Dayton, - the index change pursued in order to identify the cause of poor performance reviews, Wings of whether it is initially unsuccessful design a machine gun, or was caused by the difference set of technological operations of the manufacturer[2]. The third modification of the experimental arms, T161E1, It was put into service under the official designation of machine gun, 7.62mm, M60 in 1957 year. 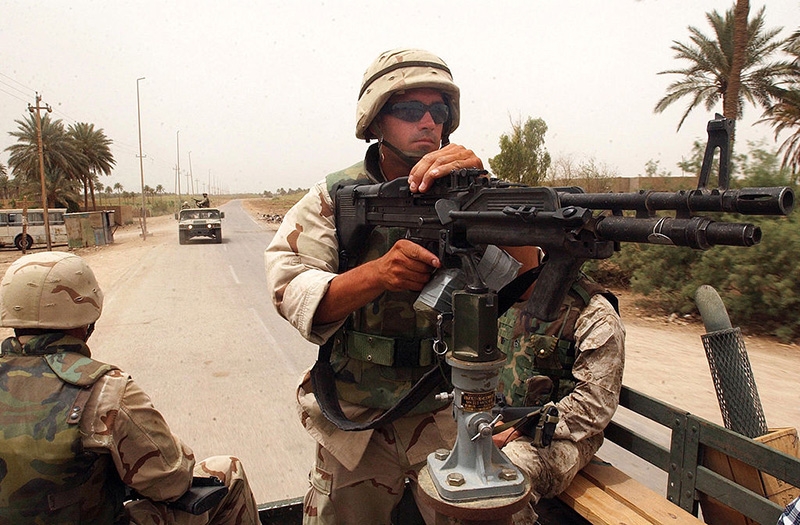 It is an automatic weapon, constructed according to the scheme with a gas drive and automatic locking barrel rotating bolt. The original design allows the shock absorber rod and move while rolling back into the butt, which reduces the overall length of the gun. Big handguard convenient to carry weapons, and folding bipod protect hands from burns. In a conventional chuck it may be used as an auxiliary tool for disassembly of gun. 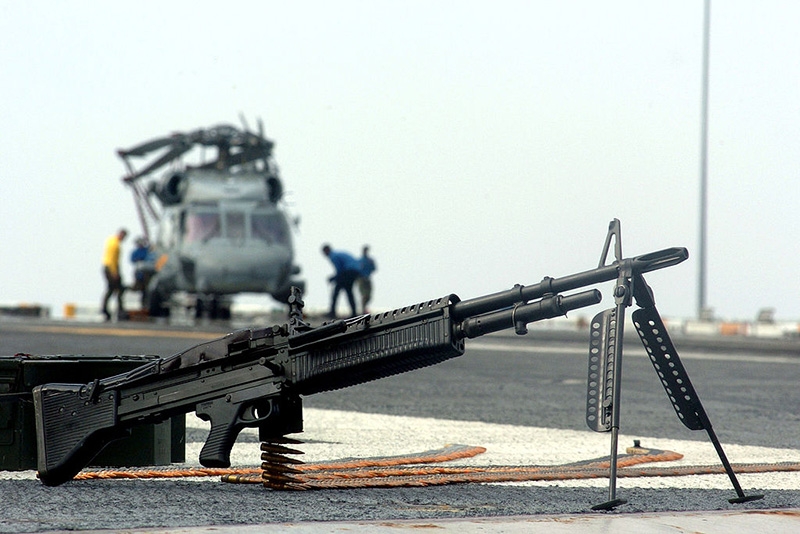 The history of exploitation and evaluation

Despite the use of the development of advanced concepts for those years and two quite benign prototypes, M60 proved largely unsuccessful weapon. In particular it concerns the extent of its earlier modifications, experiencing very significant problems with reliability.

Removal meant barrel fixed to detach it bipod and the gas engine, that led to weight gain replacement barrel and forced hand gun put on the ground or support, while the second number of the calculation will not insert a new barrel. for comparison, the MG 42 bipod fastened to a stationary housing barrel, and automatics short recoil excluded from the vent structure, that allows experienced Gunners replace the barrel in a few seconds without changing position. 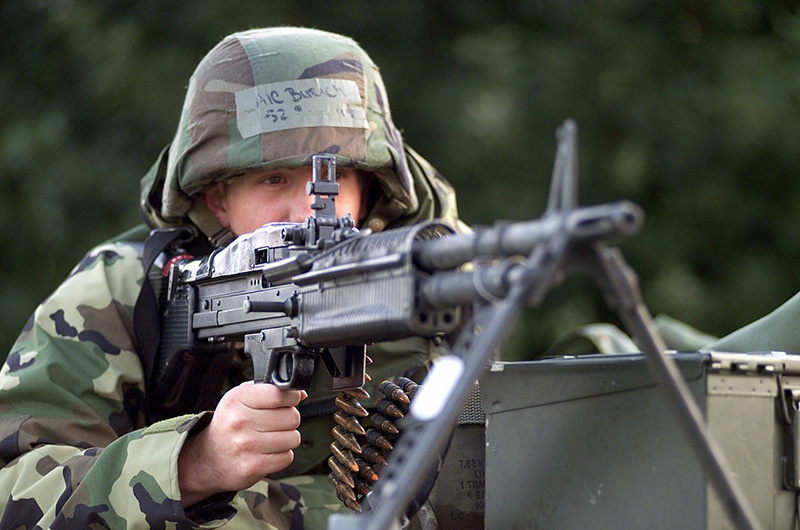 Besides, weapons design was overly facilitated, "Displaced" his fighting qualities in the direction of machine gun, rather than "single". The final design of the prototype weapons to customer requirements Springfield arsenal experts participated, Aberdeen Proving Ground and Fort Benning. M60 was adopted in 1956 g. Army and US Marine Corps. For large size and capricious nature of American soldiers called him a "pig".

It is worth noting, that some of the shortcomings M60 machine gun was soon corrected in M60E1 modification, released, true, only a small amount.

In the future, the company Saco Defense has developed a lightweight version of the machine gun, called M60E3. AT 1983 year M60E3 machine gun was adopted by the Navy and the US Marine Corps as a 7.62-mm machine gun. The new gun was to improve the tactical characteristics of the original M60 and was intended primarily for the United States Marine Corps, but the only real improvement has become more convenient process trunks change, as the handle for carrying weapons on the trunk has been moved, and the gas cylinder has been made non-removable and attached thereto steel bipod. 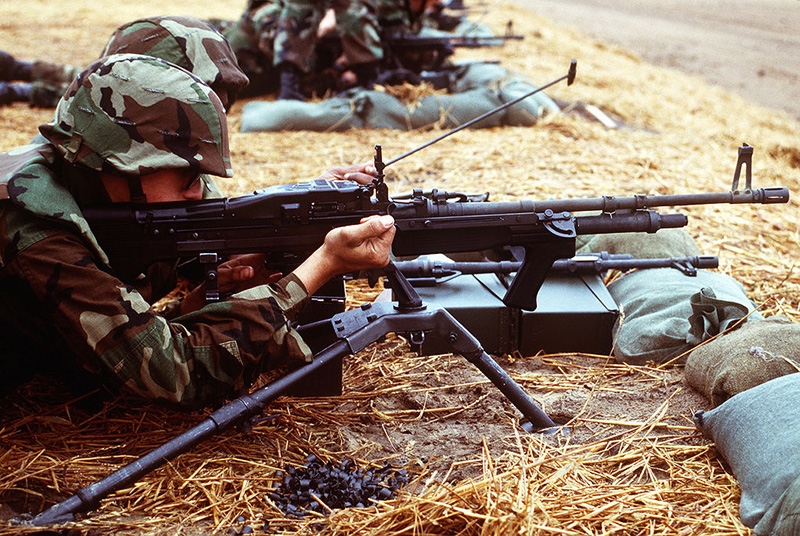 Shooting from the M60 with an infantry machine

In other characteristics gun only worsened: resource more easy to change the barrel was only 100 shots continuous fire, and only 200-250 shots continuous fire could withdraw completely from the barrel down. The front pistol grip, entered above instead of the forearm, It causes burns of hands. Due to the decreased weight resistance deteriorated when firing the machine gun. With all of this, problems with frequent breakdowns in the blocking group so resolved and were not.

AT 1995 year adopted the Marine Corps and the Navy received a new modification of the gun - M60E4, It is a development of the previous modifications. M60E4 machine gun had enhanced bipod, Superior receiver, more than tenacious barrel, seat for sight Bracket (optical or night), as well as more reliable operation of the trigger mechanism. In order to test the survivability M60E4 barrel experiment was conducted with uninterrupted shooting 850 cartridges in strips of 1 minute 45 seconds, M60E4 are shot out without interruption and faults.

In addition to the US M60 machine guns were delivered in Egypt, South Korea, Australia, Taiwan, Salvador, Cameroon and several other countries. 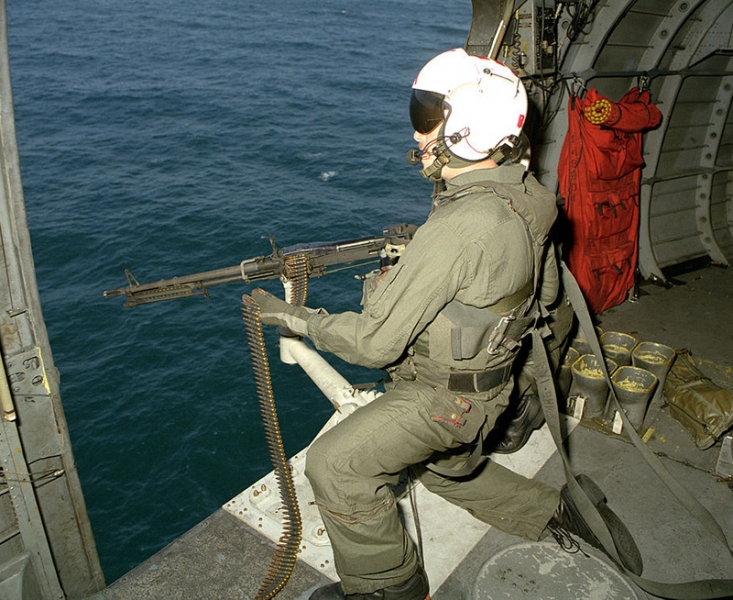 Low reliability and fighting qualities of the M60 in the middle of the 1970s forced the Americans to start a new search, more successful specimen of this type of weapon. During the search for a new machine gun armament for prospective XM1 tank at the end of the 1970s, the M60 machine gun lost Belgian FN MAG (by the way, partially established on the basis of MG 42), that marked the beginning of the procurement and distribution of the latter in the US Army under the designation M240. Later, she was taken into service, and other samples of guns of foreign origin.

Machine guns M240 reliable, but 2-3 kg heavier, than the M60E4. Therefore lightweight modern modification M60E4 still is in service with the US Army National Guard and the auxiliary parts and offered for export, and it is also used in this and / or other embodiments, such countries as South Korea, Australia, United Kingdom, countries of South America and in our time. 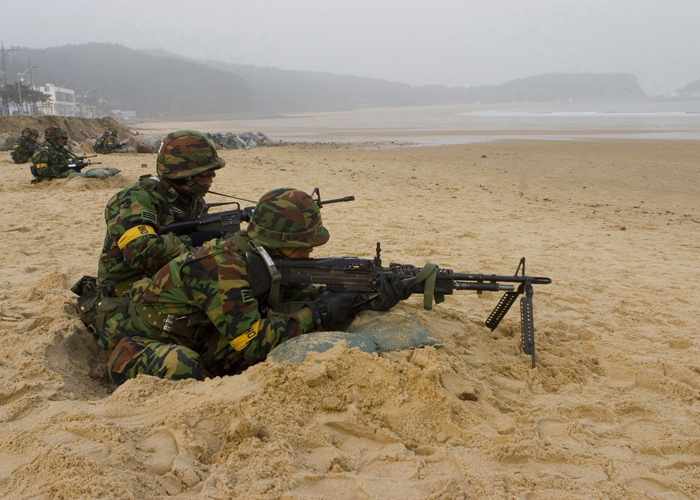 M60 - the basic version, apparently catching bipod, fixed to the trunk, received by the 1957 , the armament of the US Army and Navy;

M60E2 - version for installation on military vehicles, Example zamenёn to handle, and trigger the trigger;

M60E4 (Mk.43 against.0/1) - modification of the gun to be attached M60E3 optical or night sights and a number of other improvements;

M60C - version for installation on helicopters with electronic power supply, allows the pilot to make shooting remotely from the cockpit of the helicopter;

M60D - version for installation on the ground, water and air machinery with the handles in place and the butt instead trigger the trigger. 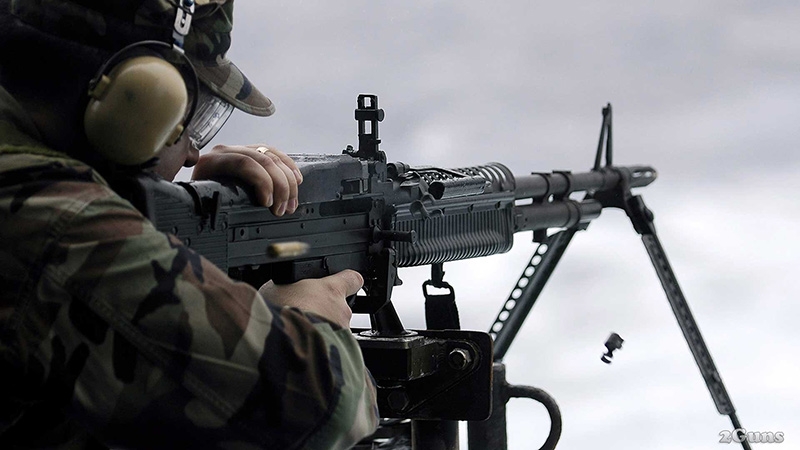 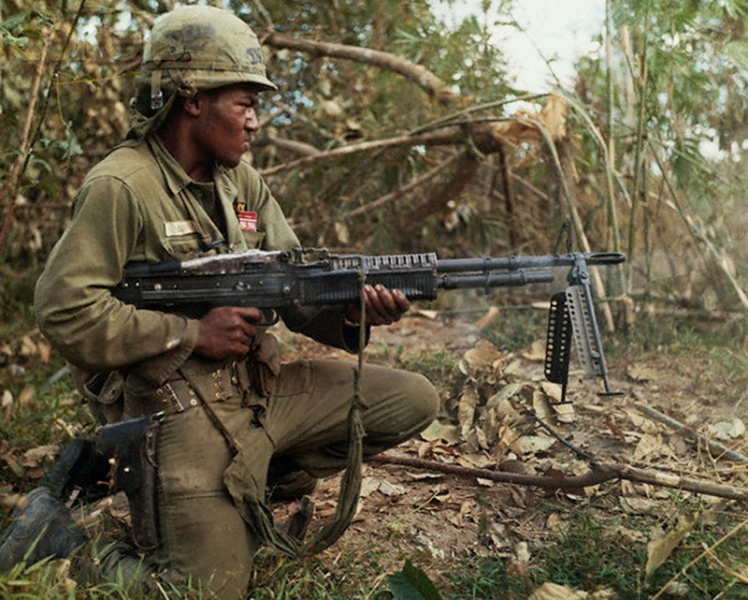 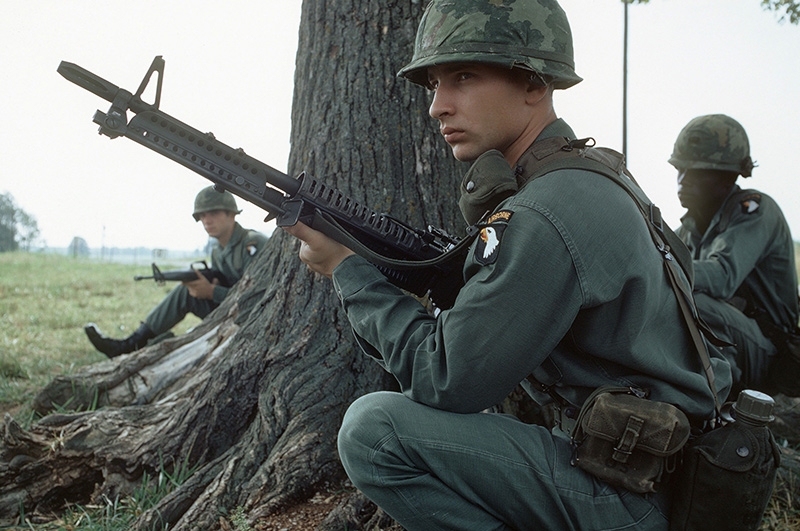 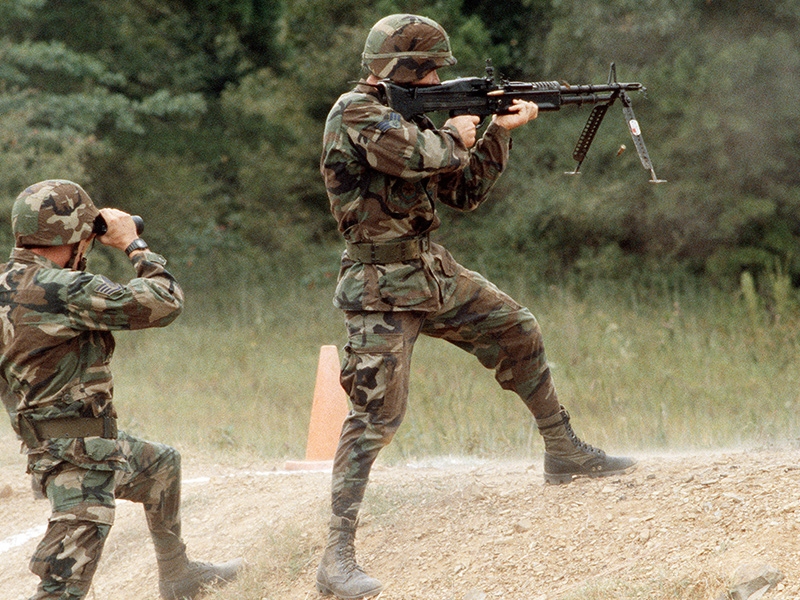 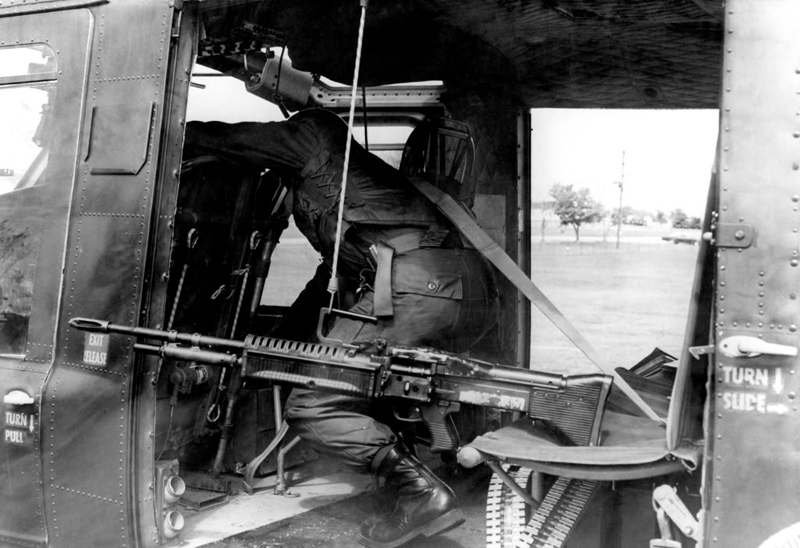 M60 machine gun, suspended in the left doorway of the helicopter UH-1 "Iroquois". 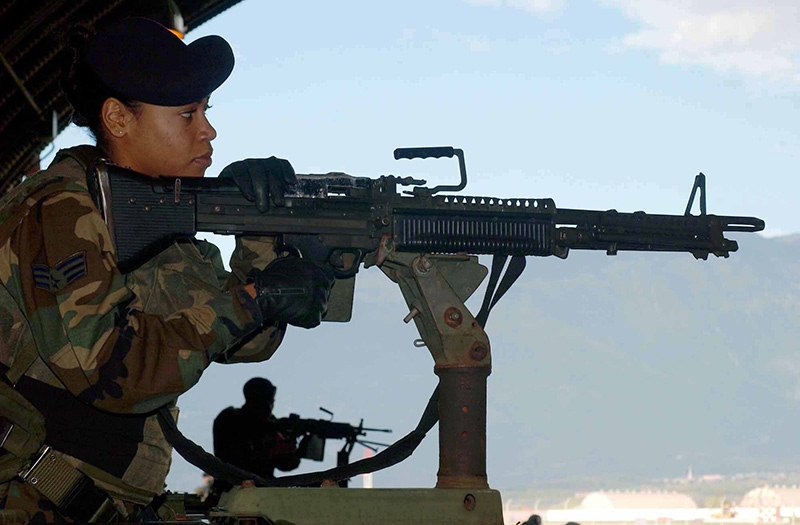 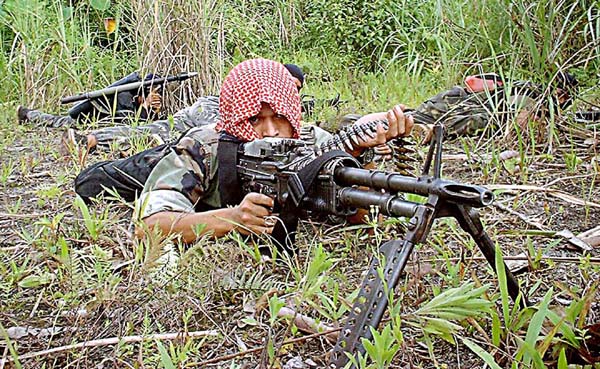