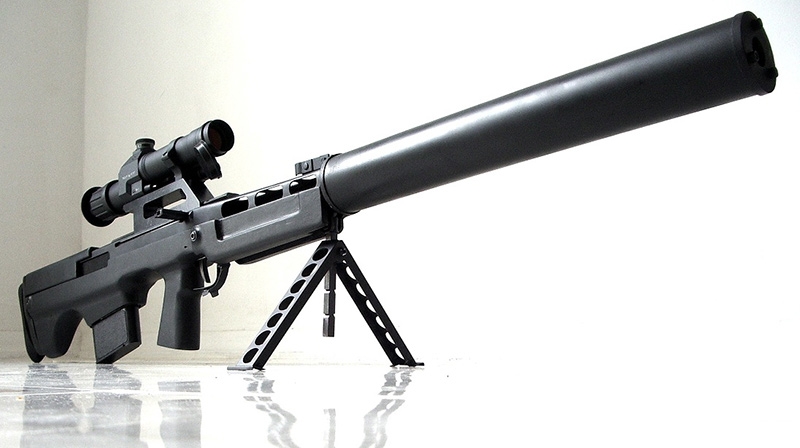 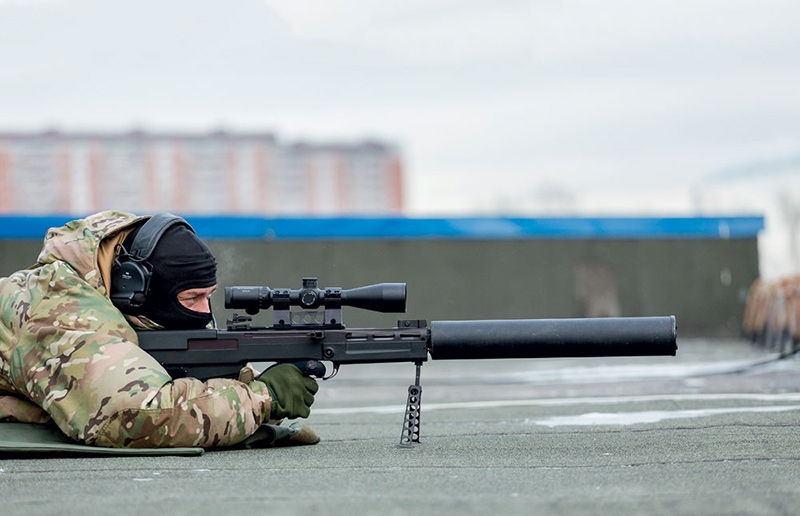 The main purpose of a sniper rifle VSSK “Exhaust” is silenced and flameless defeat hard targets (cars, other soft-skinned vehicles, a living force in heavy body armor or ukryvshayasya in vehicles, etc.) at ranges up to 600 m. Thus through the use of a bullet with a subsonic muzzle velocity (order 290-295 m / s) in combination with an effective silencer provided a significant reduction in the shot sound level (at the level of the shot volume 123 dB). Much of the effectiveness of the targets achieved by the use of heavy caliber bullet weight 59 gram (cartridge SC-130PT increased accuracy) and even 76 gram (chuck SO 130VPS with high penetrating ability). For patron SC-130PT states grouping of shots at a distance of 25mm 100 m (1 MOA / minute of angle), for cartridge SC-130VPS – guaranteed penetration 16mm steel plate at the distance 200 meters or heavy body armor 5 protection class (GOST) at a distance 100 m. 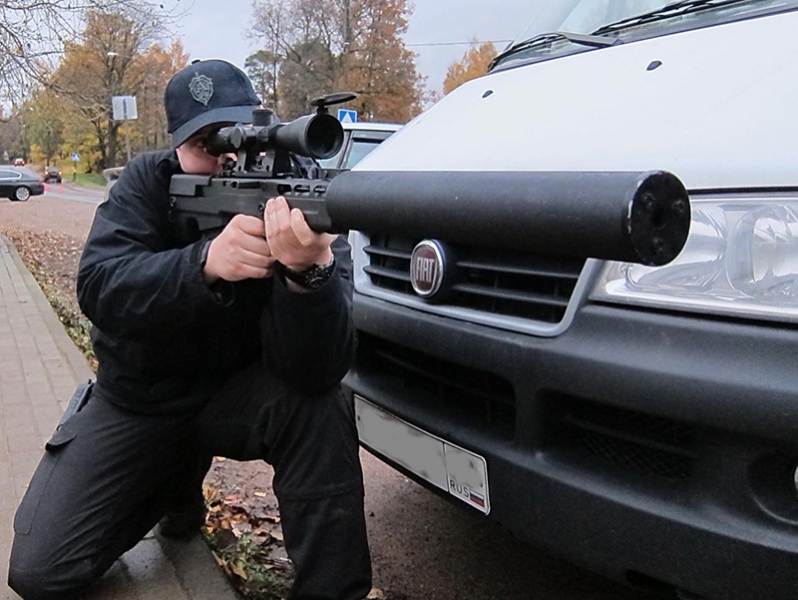 Cartridges are used specially manufactured bullets and relatively short sleeve of cylindrical shape – the total length of 12.7mm cartridge SP-130 is 97mm against 145 mm at “ordinary” domestic large-caliber cartridge 12.7h108. Due to the relatively small (selected caliber, of course) muzzle energy weapons under him turned almost two and a half – Three times lighter, than a rifle “normal” large-caliber ammunition or 12.7h108 12.7h99. Nevertheless, muzzle energy of a bullet cartridge SC-130PT is about 2500 joules (3 650 J. for cartridge SC-130VPS), and due to heavy bullets with high ballistic coefficient energy is better preserved on the trajectory of the bullet compared to “conventional” sniper rounds 7.62mm or “silent” 9mm ammunition is fired from the rifle BCC “threader”. 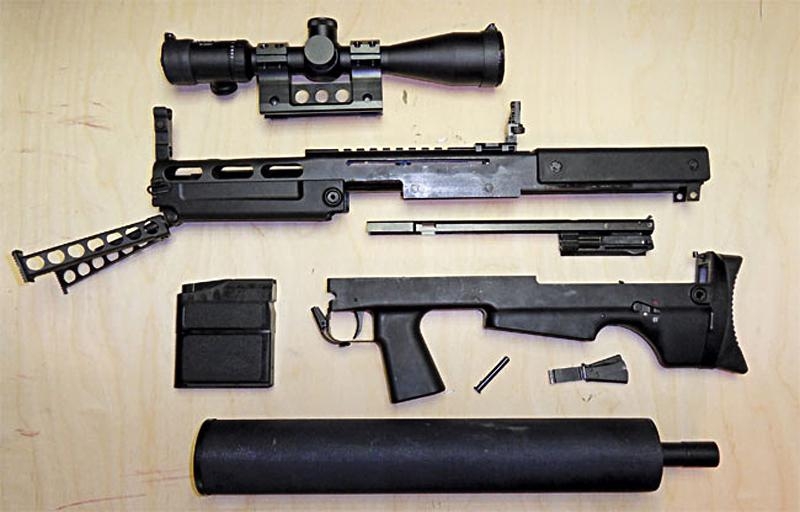 It should be noted, that such development (large-caliber rifle under a special low noise “debilitated” cartridge) is not unique. Back in the mid-1990s in the US well-known expert on special cartridges J.. D. Jones (J.D.Jones) working in the company SSK Industries, created cartridges .500 Whisper, use shorter sleeve from a hunting rifle cartridge .460 Weatherby Magnum in conjunction with precise bullet caliber 12.7mm, which had excellent ballistics. Muzzle velocity and weight of the bullet cartridges .500 Whisper comparable to those of 12.7mm ammunition SP-130, and they are used in a specially upgraded stores or even singly rifles (created on the basis of hunting), equipped with a silencer and telescopic sights. In addition to a series of rounds Whisper in the US and other limited available ammunition and weapons of similar purpose and caliber, However, reliable information about, Are such weapons intelligence agencies or law enforcement units in the US and other countries, not yet. 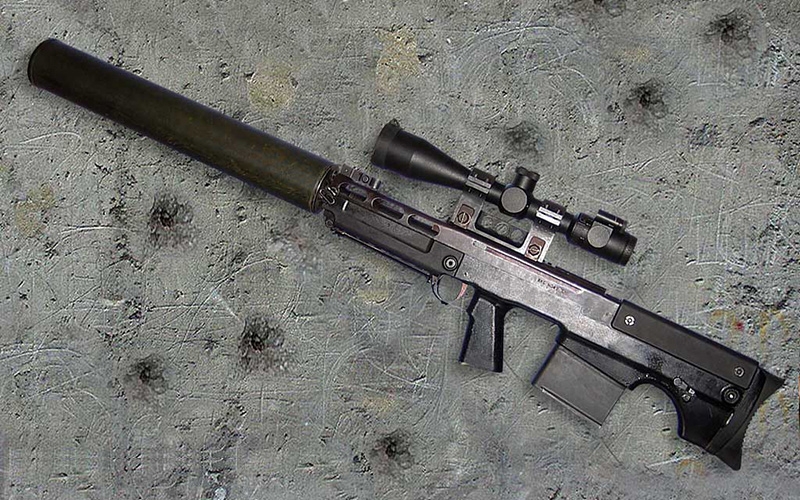 The sniper rifle is a special large-caliber VSSK “Exhaust” built in the build Bullpup and has an integral silencer, removable for transport or cleaning weapons. Recharge Gear Manual, a longitudinally sliding gate, controlled grip on the right side of the weapon. Locking barrel by the rotary shutter combat brim. Single-row detachable box magazine holds 5 rounds. The receiver rifles are made from the top mount for optical or night sights, Besides, rifle equipped with backup iron sights (male and steel), performed on folding bases. In front of the short plastic forend is foldable bipod. 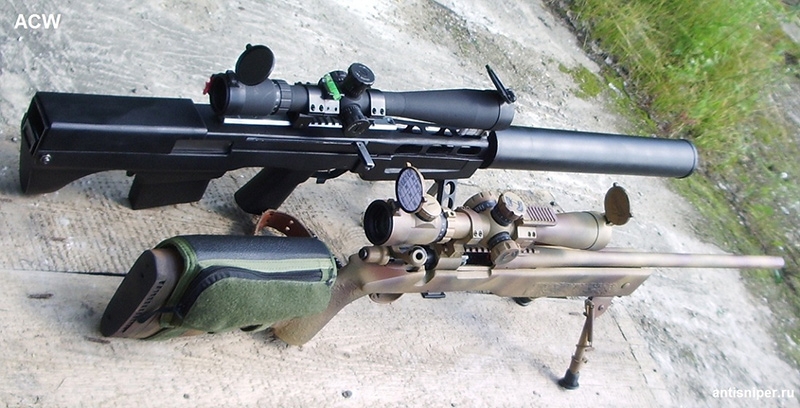 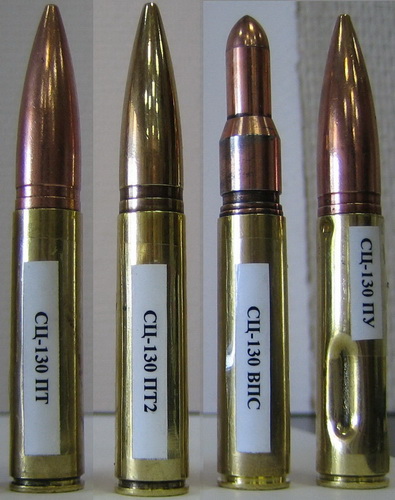 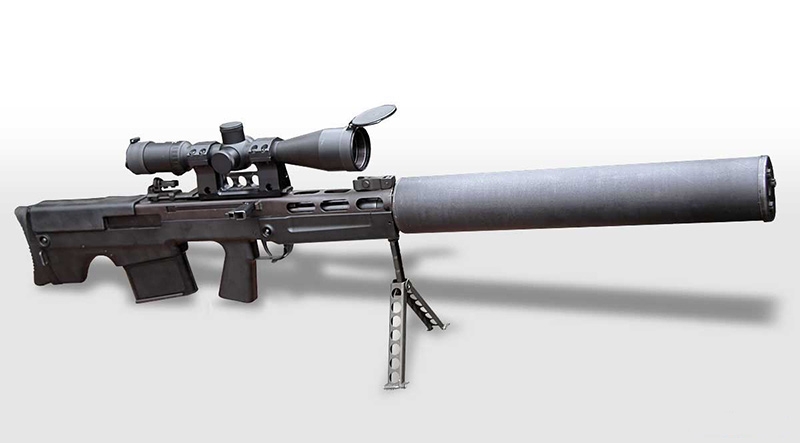 – 6,5 kg (5 without the silencer and telescopic sight) 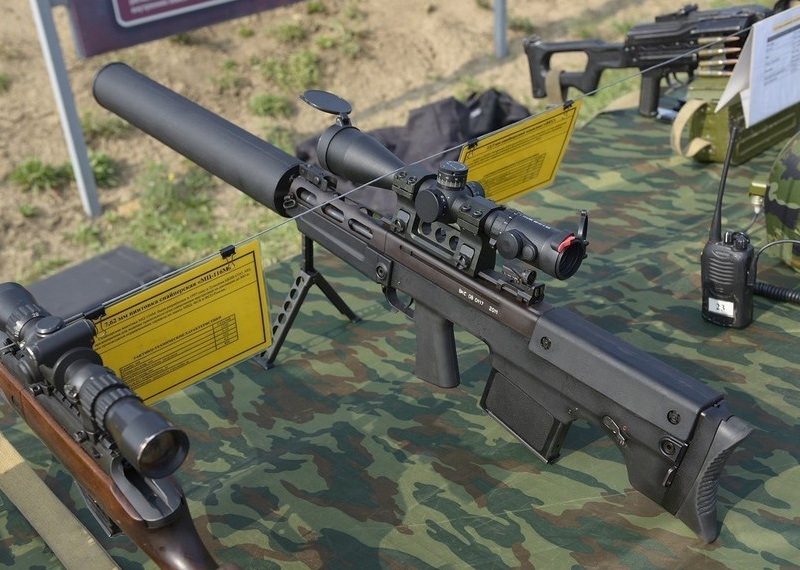 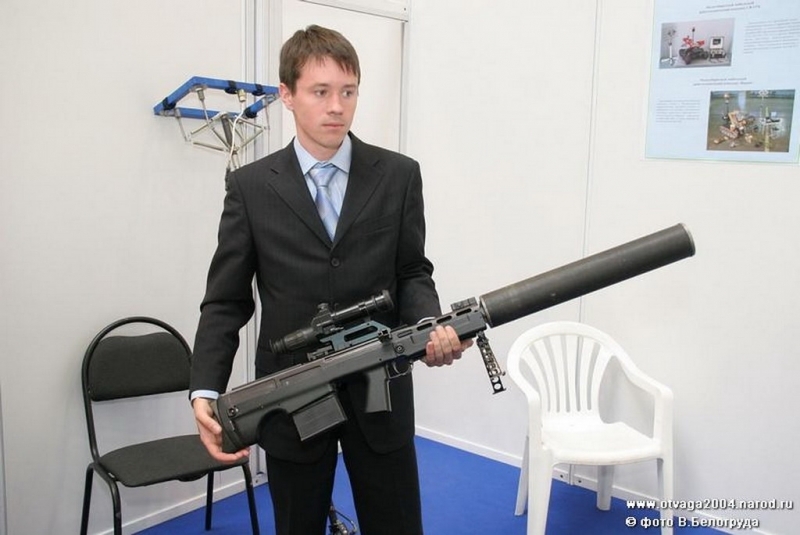 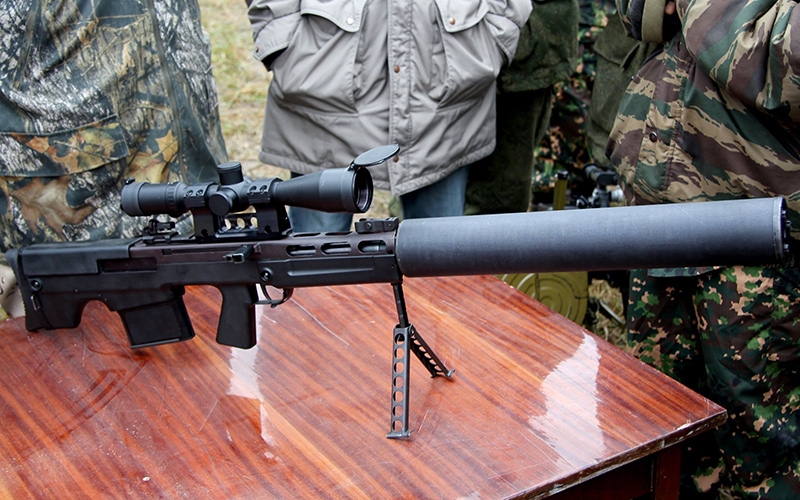 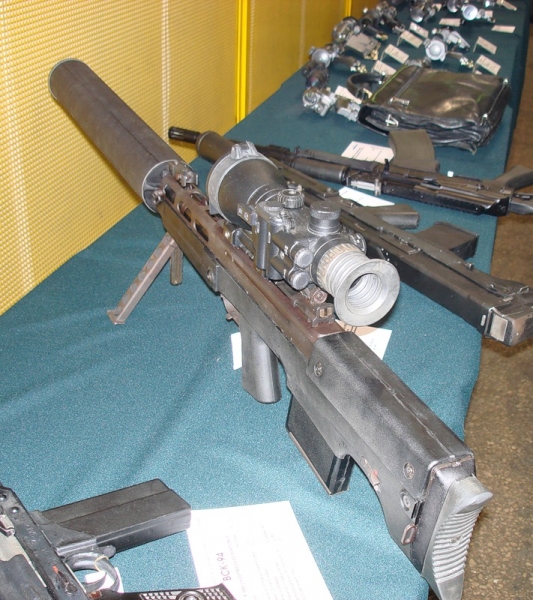 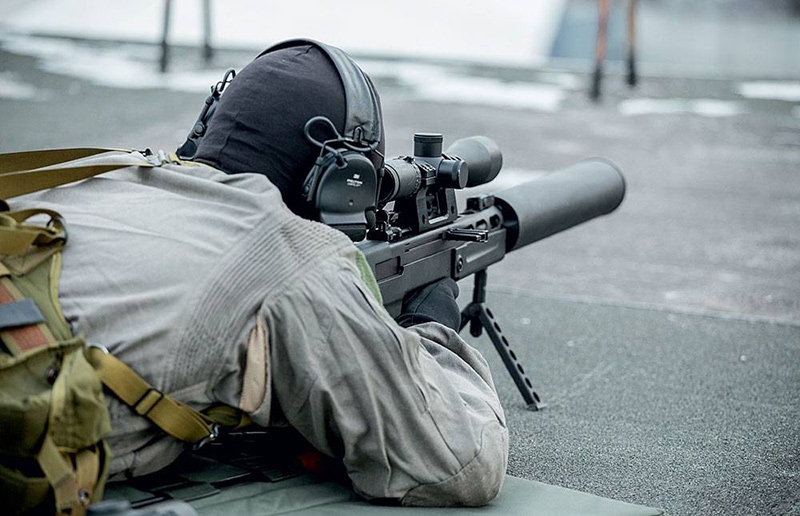 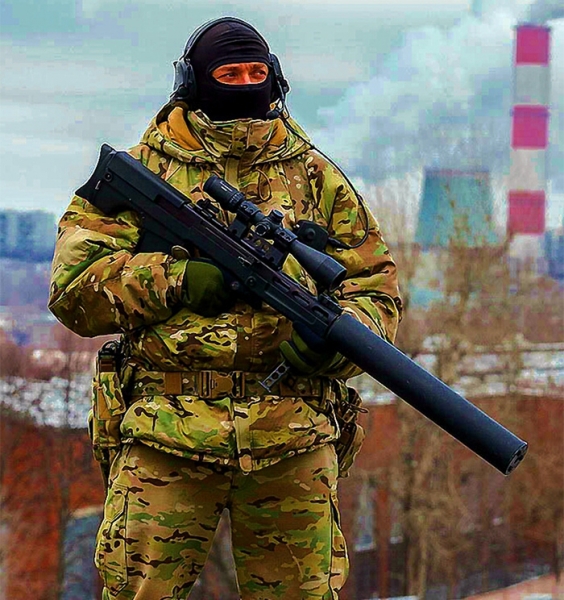