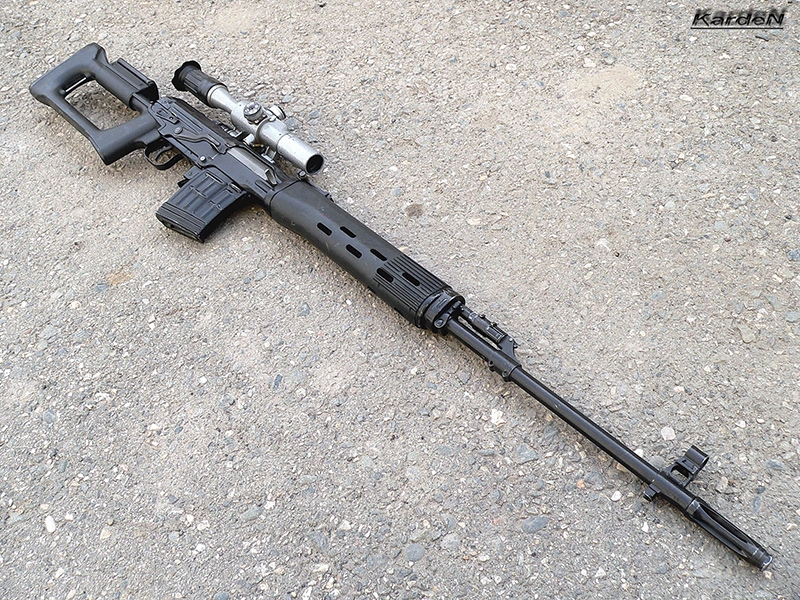 SVD – Dragunov sniper rifle 7.62mm (GRAU index - 6V1) - semi-automatic sniper rifle, developed in the years 1957-1963 a group of designers led by Evgeny Dragunov and adopted by the Soviet Army 3 July 1963 , together with an optical sight PSO-1.

For firing from SVD applied rifle cartridges 7,62 × 54 mm with ordinary R, tracer and armor-piercing incendiary bullets, 7N1 sniper ammo, snayperskye broneboynыe 7N14; It can also shoot bullets with expansive bullets JHP and JSP. Fire from SVD conducted by single shots. Submission of ammunition when firing is made from box magazine capacity 10 rounds. On the muzzle of the barrel is mounted with five arrester longitudinal slits, masking shot and prevents contamination of the barrel. The presence of gas regulator changes recoil speeds of moving parts ensures reliability rifle in.

For small-scale SVD was made a tactical silencer-flash suppressor, known as TGP-In, developed by NGOs “Special Technique and Communication”, to mount on top of the regular flame arrester, but its effectiveness has been quite controversial. 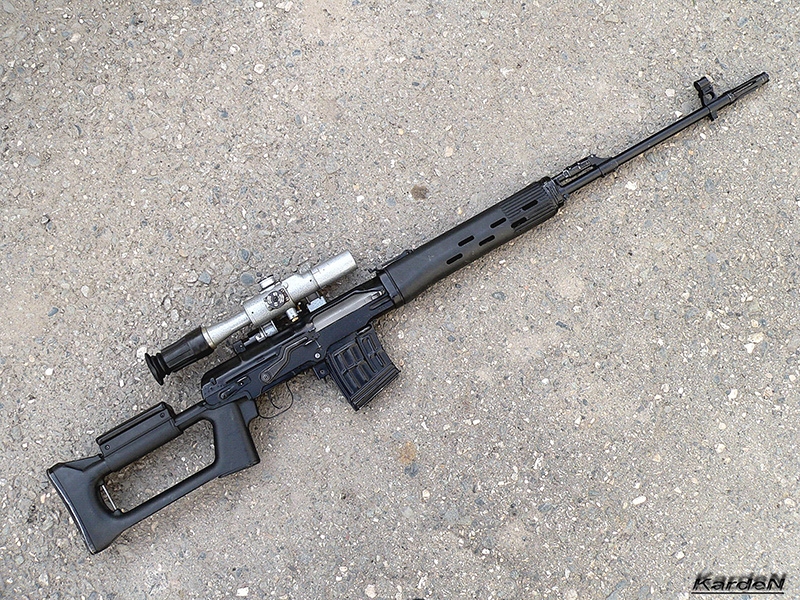 When fired portion of propellant gases, following the bullet, It rushes through the gas escape hole in the barrel wall of the gas chamber, presses against the front wall of gas piston and piston pusher discards, and with them, and the bolt carrier to the rear position.

When withdrawing the bolt back gate opens bore, extracts from the chamber liner and ejects it from the receiver to the outside, a gate frame and compresses the return spring cocks (He puts it on the self-platoon).

In the forward position of the gate frame with the shutter returns under the action of the return mechanism, shutter shall be sent with the next cartridge from the magazine into the chamber and closing the bore, a gate frame timer outputs the sear from the hammer cocking and trigger timer becomes cocked. Locking is performed by turning the shutter and the left shutter pin receiving combat protrusions into the recesses of the receiver. 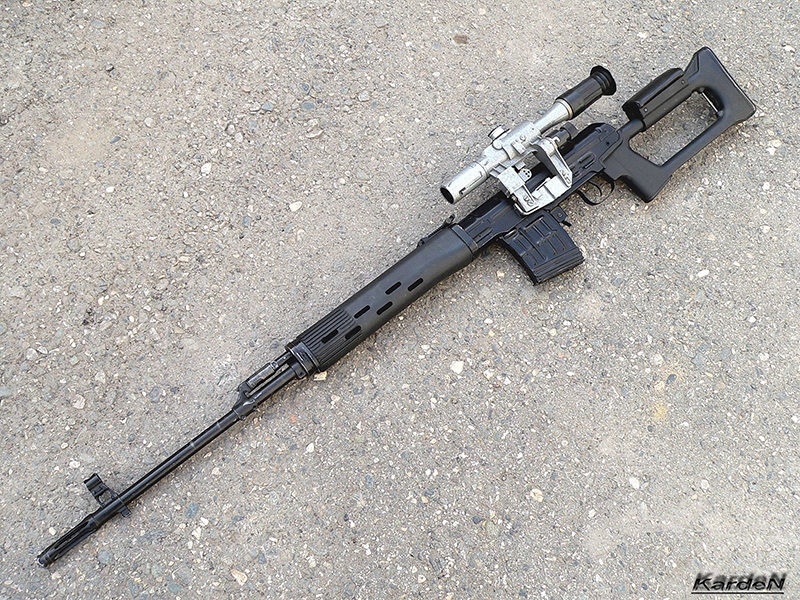 For the production of the next shot is necessary to release the trigger and press it again. After the release of the trigger rod moves forward and its hook snaps over the sear, and when you press the trigger sear hook rod rotates and separates them with a cocked hammer. trigger, turning on its axis under the action of the mainspring, strikes the firing pin, and the latter moves forward and produces pinned the primer of the cartridge. It occurs shot.

When fired the last bullet, when the shutter would go back, store feeder picks up shutter stop, shutter rests in it and bolt carrier stops in the rear position. This is a signal that, it is necessary to charge the gun again. SVD with a wooden butt

When the SVD took on arms, sniper cartridge for it has not yet been, therefore, in accordance with the "Instruction on small business" battle rifle accuracy is verified by conventional firing cartridges with bullets with steel core and is considered normal, if firing four shots from a prone position on a range of 100 m all four holes fit in a circle with a diameter 8 cm.

AT 1967 year has been adopted sniper cartridge 7N1. When firing this cartridge dispersion is (depending on the pitch of the rifling) not more than 10-12 cm at a distance 300 m.

Originally produced from SVD step barrel rifling 320 mm, similar sporting weapons and provides the best patterning. However, with this step the dispersion B-32 armor-piercing incendiary bullets doubles. As a result, 1975 it was decided to change the pitch of grooves on 240 mm, which worsened patterning on 25% (by firing conventional ammunition on the range 100 m., permissible circle diameter is increased from hitting 8 cm 10 cm). 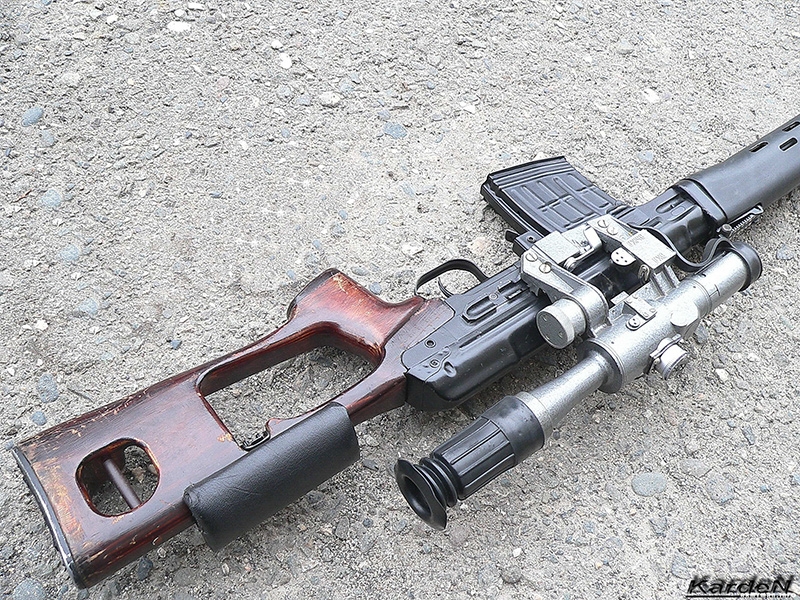 Interesting, that the latest revised edition of "Instructions on small" case for the IRS came in 1967 year. All subsequent editions - 1971, 1976 and 1984 s been stereotyped edition copies 1967 of the year. Therefore, in the "Manual" does not say anything about any sniper cartridges or a change step of rifling.

Sight PSO-1 is designed for shooting up 1300 m. generally considered, you can shoot effectively at a distance of only a group target, or keep harassing fire. However, 1985 year in Afghanistan, a sniper killed Vladimir Ilyin Dushman from a distance 1350 m. This is a record not only for SVD, but in general for the caliber rifles 7,62 mm.

The biggest challenge when shooting at long range errors are preparing input data for firing (This is true for all sniper rifles). at a distance 600 meters median height error (in the definition range, of equal 0,1 % range) — 63 cm, mean error in the lateral direction (determining crosswind velocity, of equal 1,5 m / s) — 43 cm. for comparison, mean deviation of dispersion of bullets for the best snipers to 600 m - Height 9,4 cm, lateral 8,8 cm.

known case, When the fighters guerrilla group FMLN managed to knock down a shot from the SVD jet attack aircraft the Air Force of El Salvador. It happened on November 12th 1989 year at the village of San Miguel. We go on the attack aircraft Cessna A-37B successfully entered into sight and was amazed (later told a lucky sniper, it was aiming at the cockpit). The bullet hit the pilot, after which the aircraft lost control and crashed. Similarly, we are using SVD Iraqi insurgents, declares the destruction by fire sniper rifles small reconnaissance UAV RQ-11 Raven. 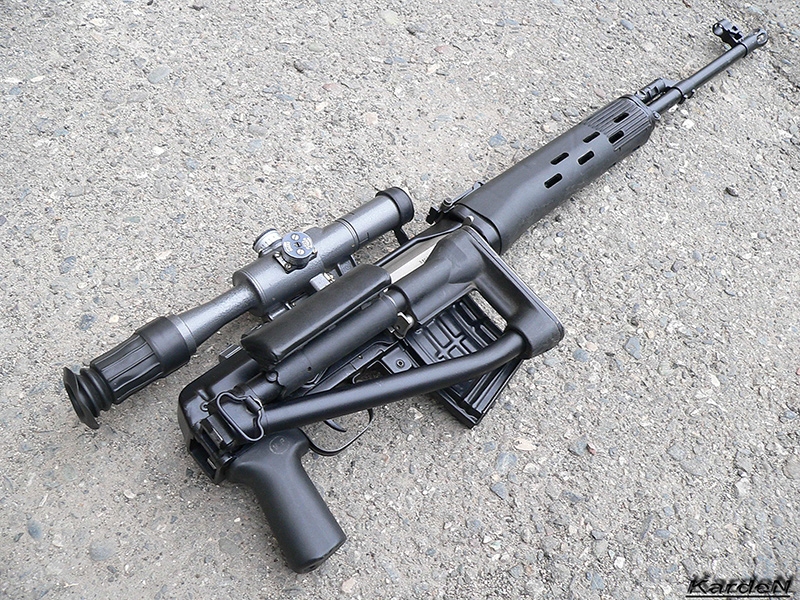 SIDS - version of AGI for airborne troops with folding stock and shortened, but thickened trunk; established in 1991 year, put into service in 1995 year.

SVDm - added Picatinny strip on the lid of the receiver. detachable bipod. 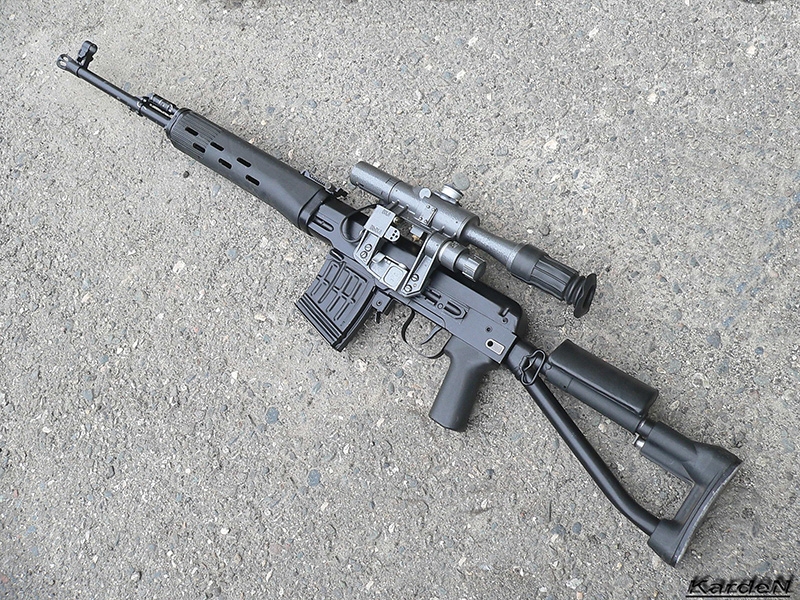 The performance characteristics of SVD

speed of a bullet SVD 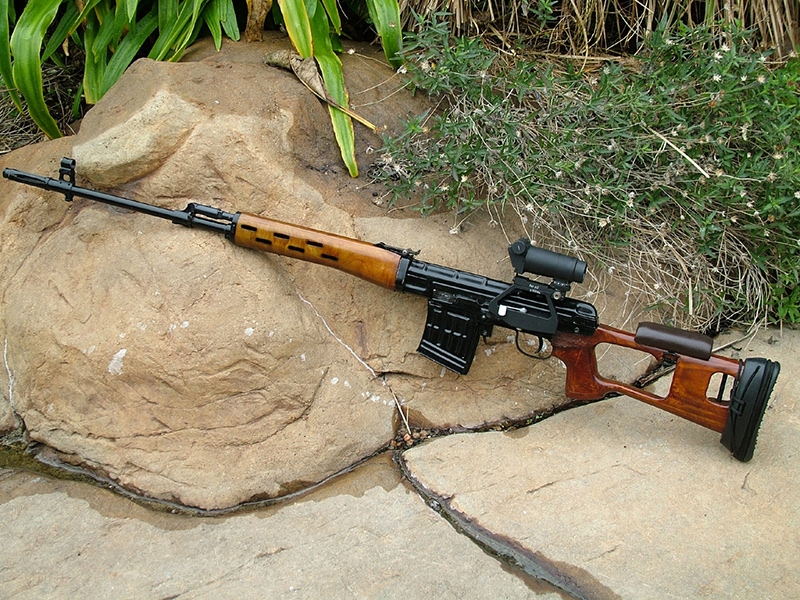 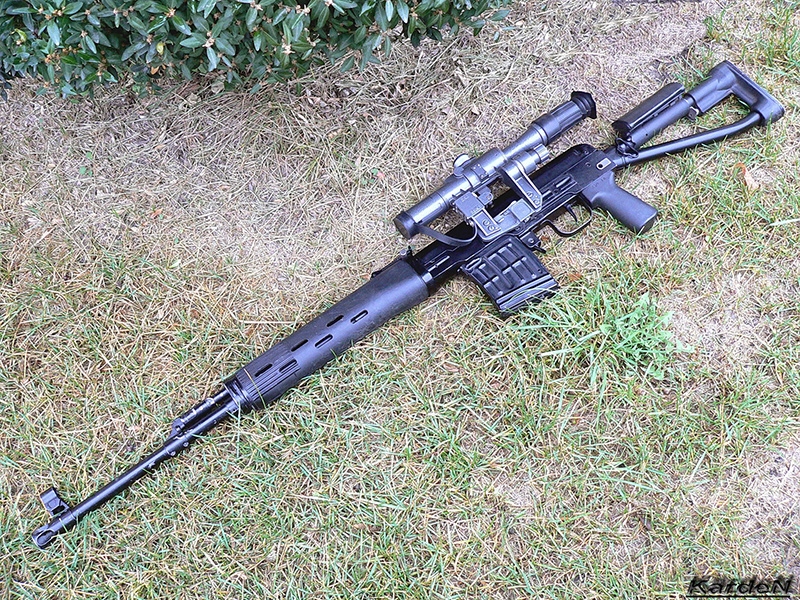 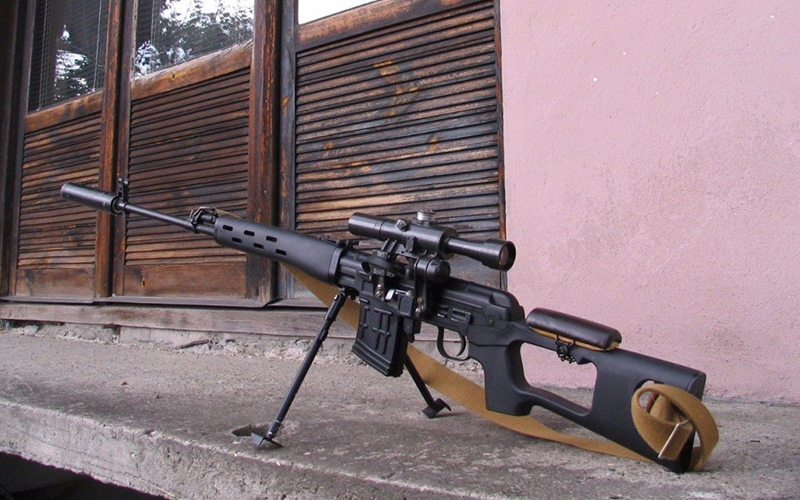 SVD with a silencer 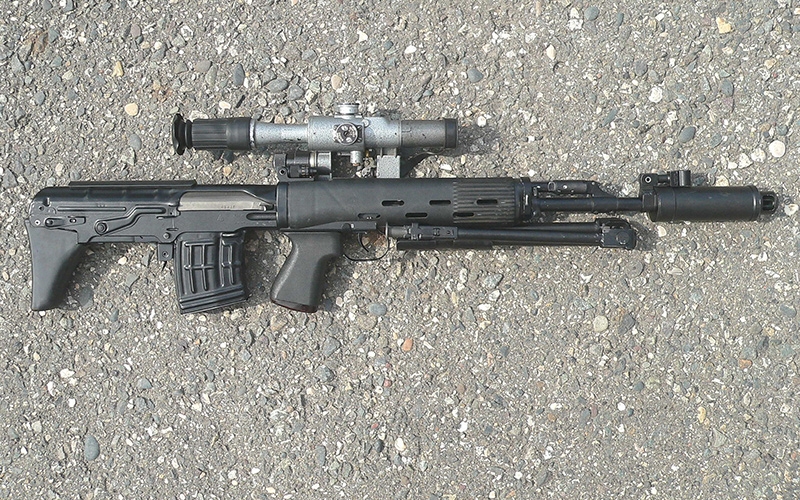 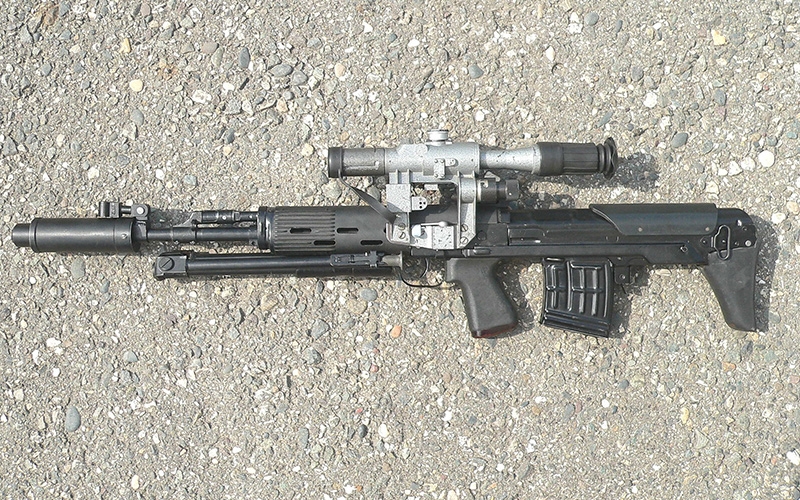 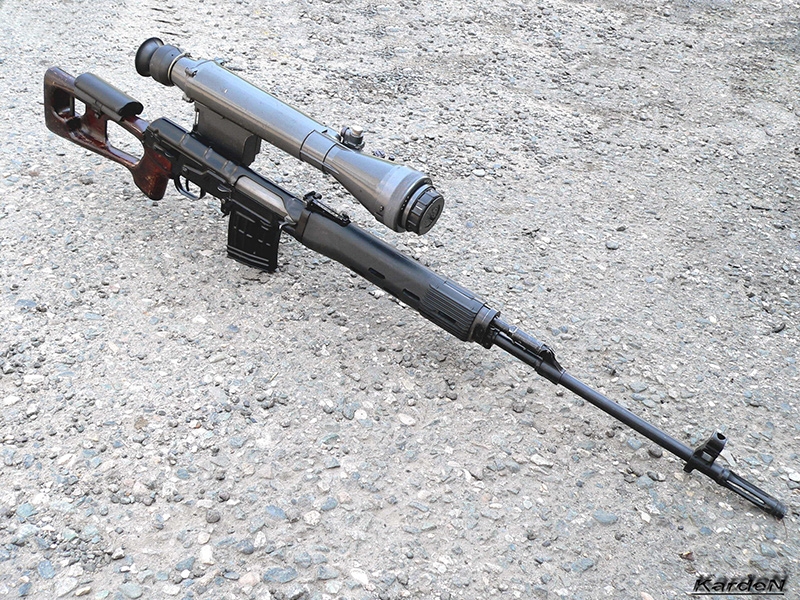 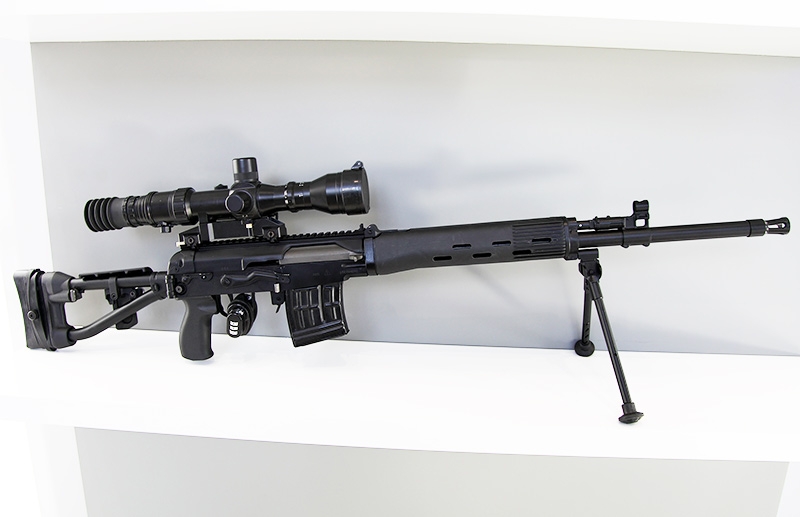 SVDm - added Picatinny strip on the lid of the receiver. detachable bipod.