"TYUL'KIN fleet" consisted not only of seiners, die da buksirov. It also includes a kind of aristocracy. It goes on some supernovae or more high-speed vessels, but the most peaceful pleasure boat. The war demanded maritime transport. And passenger ships were mobilized without any issues. If seiner still serve the country, fishing, ie. provisions for the army, the pleasure boat in his former role in these conditions become a burden.

On the first day of the war humble, to some extent, even elegant passenger ship "Summer Lightning" was mobilized. Laid the ship, as well as his "sister ship", was in 1927 year at the Odessa Shipyard named after André Marty. Future "Summer Lightning" was a single-screw and single-deck with a displacement 353 tons. German firm capacity of Benz diesel 220 HP. provide speed 10 knots. With a length in 32,3 m, width 5,5 m and draft 2,1 m "Summer Lightning" could take on board more than 200 passengers.

The new all-metal ship was delivered to the customer (Sovtorgflot) at 1929 , and was assigned to the port of Yalta. AT 1935 year's "Summer Lightning" was renamed, Named after the Civil War hero and the chief of Yalta port Pyotr Ilyich Lukomsky. And rolled the ship passengers simple and joyful holiday-makers, demonstrating the beauty of the coast, tk. It was originally designed for coastal marine areas.

Already 27 June 1941 year "Lukomsky" was for the conversion into a minelayer. Less than half of the month, as a newborn mine layer was a part of the Black Sea Fleet. Ship was armed 2 45mm guns 21-K, 2-mja 12.7 mm machine guns and ten Minami DShK. Crew amounted to 33 sailors. First, "Lukomsky" served in the Odessa Naval Base. In March 42, during a raid by enemy aircraft mine layer out of order, but his fly lifted from the ground and repaired, but its mine to do the work he was not destined. From 42 th to 43 rd "Lukomsky" engaged in the transport of the wounded from the Caucasian ports of Novorossiysk to Sochi. During his short service performed before the ship 50 evakoreysov saved 2807 human (of them 1826 bedridden and severely injured).

3 January 1945 , the ship was disarmed and returned to civilian fleet. "Lukomsky" began to walk along the route "Odessa - Luzanovka" and "Odessa - Chernomorka". The 65-m tired ship sent for dismantling. 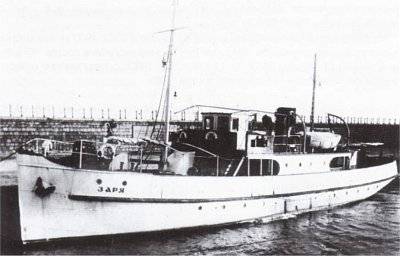 "Sister ship" ship "Lukomsky" (former "Summer Lightning") and it entered service in 1929 year under the name "Dawn". Only the "Dawn" went far from their place of birth, it was credited to the Sochi Shipping Company. This pleasure boat also mobilized and converted into a mine layer. Again, it was used for its intended "mine" purpose, only the first months of the war, and even before his brother joined the ranks of maritime transport. He participated in the Battle of the Kerch Peninsula, and then transporting the wounded from the Caucasian ports. The motor ship has committed 21 evakoreys, carry 1400 human, including 645 seriously wounded.

"Dawn" was not prepared for a peaceful death "Lukomsky". 5 Martha 1943 , the mine layer "Dawn" once again came from Gelendzhik to deliver cargo to the Malaya Zemlya bridgehead. In the area Myskhako minelayer hit a mine (bad luck joke, at others, it does not hold) and sank to a depth of about 40-45 m.

At all, Sochi Company during the war was virtually cleaned for army needs, that is understandable. Following the "dawn" at the disposal of the Black Sea Fleet moved 8 passenger boats and two passenger ship - "East" and "North".

Both the ship began to be built in 1932 by order Sovtorgflota on already above the Odessa Shipyard. Motor ships were the same type - single-screw and one-decked with a displacement 285 tonnes. Length - 37,5 m, width - 6,6 m, sediment - 2,3 m. But, Unlike older colleagues ("Stozhatry" and "Dawn"), data on ships installed Benz diesel with an output 375 hp, that allows to give the course in 13 knots. Passenger was about 300 human. 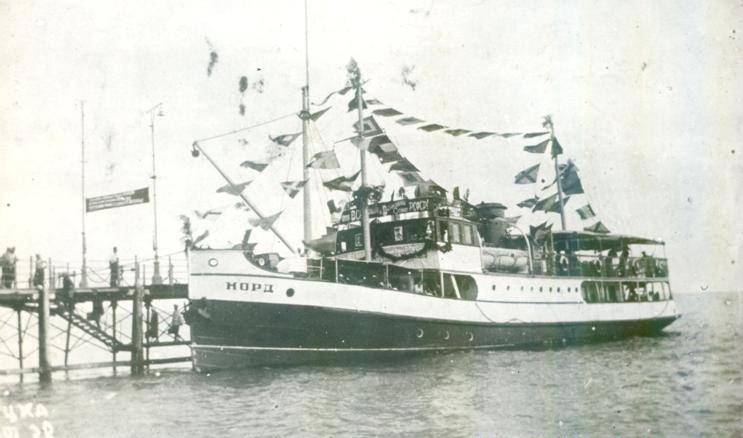 Holiday pleasure sudonyshki cruised on local lines in the scenic coast of the Caucasus. When you look at a photo of the ship "East" catch yourself thinking, that on the deck for the entourage is not enough ladies in wide-brimmed hat with a veil. But in June, the two vessels took visor and were mobilized. "Nord" and "Ost" was converted in minesweepers. Court received two 45-mm guns, two machine gun and DSK, of course, They were fitted with trawls. Crews 'new' minesweepers numbered by 35 human. In addition, the "North" was the "T-513", and "Ost" - "T-514".

T-513 "Nord" almost immediately began to combine duties of the trawler with the transport operation, repeatedly he has been involved as a ship landing. Member of the Kerch-Feodosiya operation. FROM 1942 Year sweeper began to hold regular evacuation flights between Caucasian ports, of course, and Myskhako area. Total "Nord" made 76 for many life-saving flight, evacuated 6,5 thousand. 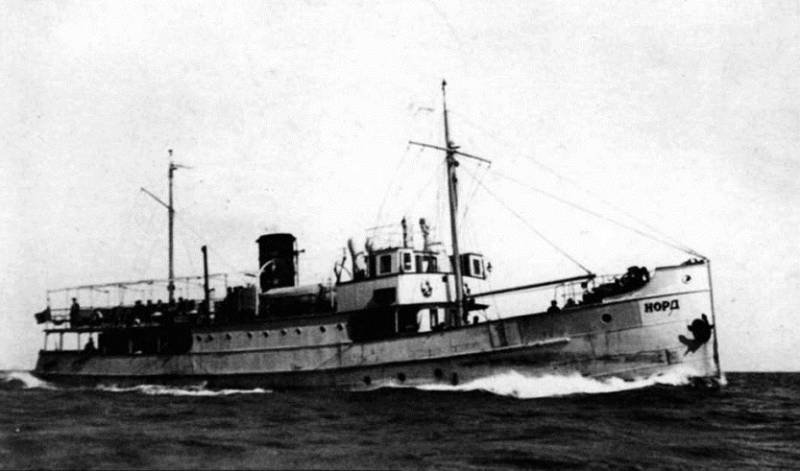 Hardly the war ended, "Nord" returned Sochi Shipping Company. In the mid 50s the ship again pleased the tourists on the line of Tuapse-Sochi-Gagra. AT 1968 year veteran ship, who saw blood on his deck, He was written off for scrap. 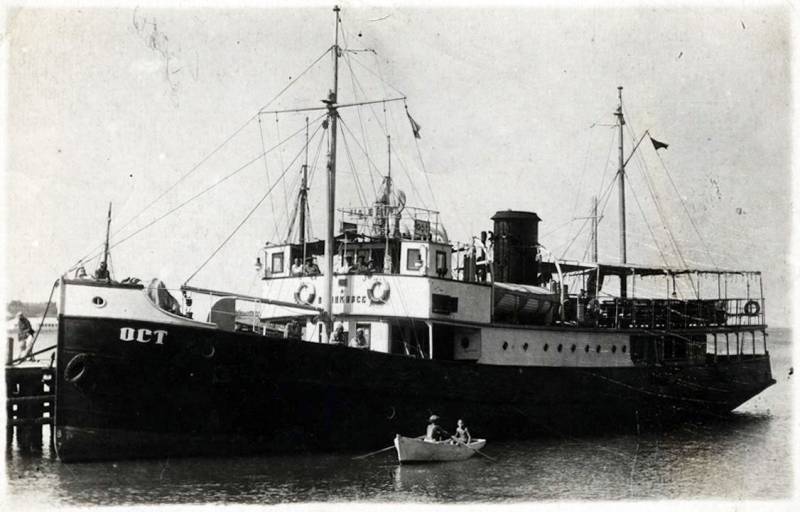 Idyll Resort South was short for the ship “Ost”

T-514 "Ost" much less fortunate. At first, the newly-made sweeper passed the same "school". Participation in the Battle of the Kerch Peninsula, regular evakoreysy, whose number reached 30, during which minesweeper rescued 2250 human, of them 874 seriously wounded.

From the outset, education Malozemelskaya bridgehead "Ost" spread to the supply of troops and ammunition replenishment. 4 (perhaps 5) Martha 1943 year 18:30, ie. it got dark, minesweeper came from Gelendzhik and headed for Myskhako loaded with food and ammunition. But as soon as he passed the village of Kabardinka, as a blown on German magnetic mine and sank.

Such is the history of those cheerless, who it was originally created for the delight of tourists and the southern sun.