The most long-winged aircraft experienced with a fully assembled glider 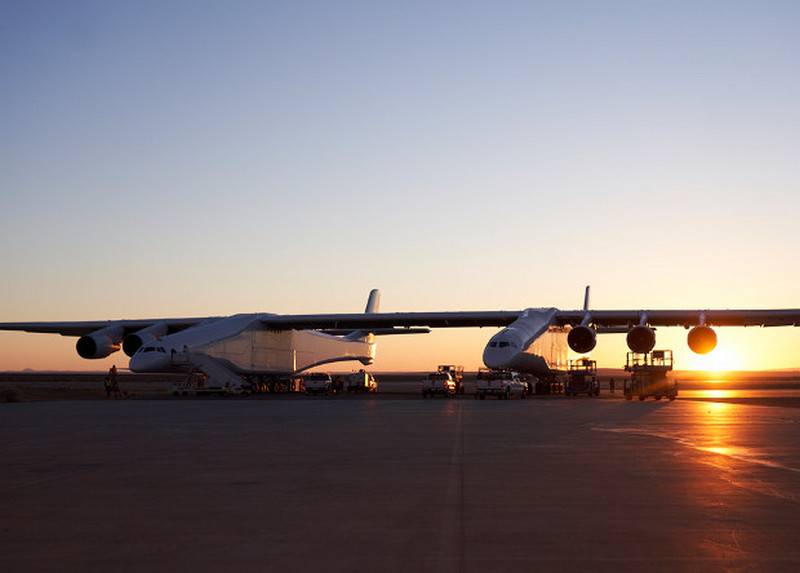 Stratolaunch plane began to carry out jogging last December. Until now, the airframe lacked some elements, including the front edge of the wing in the engine mounting area. At the stage of pre-flight testing is acceptable especially at the stage of the first prototype. The plane with a fully assembled glider while jogging in February this year, has a top speed in 40 knots (74 kilometers per hour).

Stratolaunch circuit formed by dvuhfyuzelyazhnoy. The scope of its wing is 117,3 m. The length of the two fuselages 72,5 m. The aircraft has a mass 226,8 tonne and a maximum takeoff weight - 589,7 tons. To take off the required length strip Stratolaunch 3,7 km.

Prospective aircraft will be used in an air launch platform - small rocket will be launched from it in the air to bring the payload into low-Earth orbit. Stratolaunch can carry a useful load weight 249,5 tons.

Under current plans Stratolaunch Systems, first demonstration flight of a new aircraft with the launch of the carrier rocket will be held in 2019 year. He will launch a cruise missile carrier Pegasus XL, whose mass is 23,1 tons. What kind of payload will carry a rocket, not yet known. Generally, Stratolaunch can provide simultaneous launch of three types of Pegasus rockets, reports science portal “N+1”.