Typical modern tank has differentiated book with a strong frontal barrier and less strong in other areas of the hull and turret. The weakest are traditionally roof hull and turret, in normal conditions, almost not to endanger. Similar features can be used by different armor means defeat. So, with the characteristics of differentiated protection related principle of domestic homing combat element SPBE.

At the beginning of the eighties of the last century at the disposal of Soviet military aviation there are several types of ammunition, suitable for the destruction of enemy armored vehicles. Such problems can be solved by means of guided and unguided missiles or bombs, as well as with the use of air guns. In this case, all such funds could show limited effectiveness in a real situation. development has been launched to enhance the anti-aircraft-building project of the new special autonomous weapons systems. 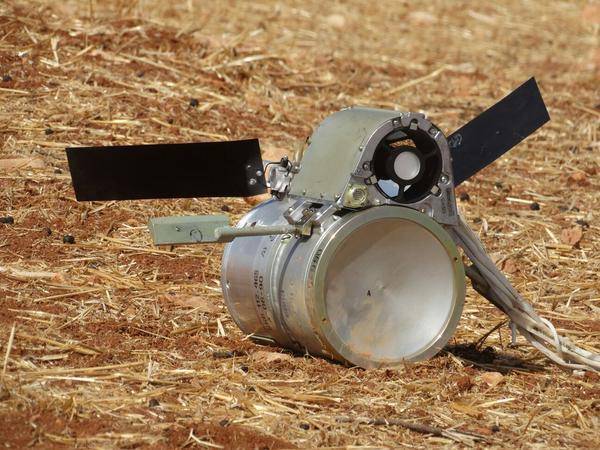 No later than the mid-eighties science and production association "Basalt" (g. Krasnoarmeysk, Moscow region) began the development of an anti-system, uses a completely new operating principles. It proposed the creation of a relatively lightweight and compact munition, is able to search for and hit the enemy combat vehicles. Such a product could be used both in the aviation cluster bombs, and as part of other percussion tools.

According to reports, It was originally designated as a new project PTAB CP - "Anti-tank aircraft bomb homing". Also used the cipher "Motive-3". Subsequently, the project changed its name to the modern, under which later became widely known. The product is now called SPBE - "homing submunitions". Later modifications retained such designation, but it complemented the letters "D" and "K".

The project SPBE two types with different destination devices have been created. The complex "Motive-3" includes actual combat elements and the command element. The task of the latter is to monitor some of the parameters and the formation of radio controls for combat elements. The need for a separate command member was linked to the large size of equipment required. Subsequently, the necessary sensors were reduced, so that the modernized elements SPBE-D became fully autonomous and no longer need third-party teams. 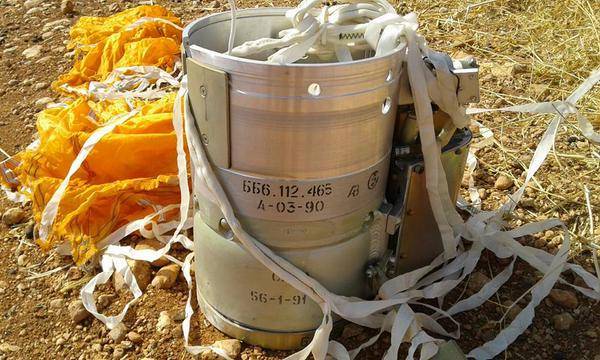 Command and combat elements of the system base modifications SPBE, despite serious differences, to unify. They have the same body, dyadic. Part devices placed inside the cylindrical body, carrying fixed curved housing with other devices. The upper cover member is attached several folding plates stabilizers. According to reports, elements of two different types of domestic equipment, that is related to their roles during combat operation.

About two-thirds of the combat element of the body takes a shaped charge, designed to destroy armored targets. element bears 4,5 kg of explosive. The lower section of this charge is in the form of cumulative funnel and has a copper cladding, enhancing combat characteristics. Facing also serves as the lower body cover, protecting the explosive from external influences. Available forms a shaped charge jet at undermining, consisting of hot gases and molten metal. This jet develops a high speed and at regular distances response to pierce 70 mm homogeneous armor meeting at an angle of 30 °.

Command system component "motif 3" has no warhead. Instead, it is placed in a cylindrical housing TN. radiometric probe. With compact altimeter element is able to determine the distance to the ground,. This information is used automation in the management of submunitions. The data from the altimeter comes in devices, placed in a side container. At a certain point in time, having received the requested data, apparatus command element radios submunitions necessary commands.

Apparatus combat airborne container element is more complex. Inside the housing is placed the curved infrared receiver, used as a means of finding purposes. The photosensitive elements of this opto-electronic device is placed in the hole bottom shell. The known data, a receiver capable of operating in the range of wavelength 3-5 um and 8-14 m, that allows him to find the thermal radiation, typical for combat vehicles. The field of view optics - cone width 45 arcminutes. Small dimensions of the field are compensated by an original way of conducting surveillance.

For some reason, related to the method of application, combat and team member was the same size and do not differ in weight. Each of SPBE complex elements in the transport position has a height 270 mm. The diameter of the cylindrical body of the warhead or the radio altimeter - 186 mm. The transverse dimension of the casing with the instrument compartment - 290 mm. Mass combat-ready element - 16 kg.

Homing submunitions SPBE "motif 3" can be used with different platforms carrier. One of the main means of transportation and delivery to the target is a single cluster bombs of different types. Items can be equipped in the RBC-250 tapes or RBC-500. In the case of the latter in the body length 2,5 m and diameter 450 mm is placed 14 submunitions and 1 command. Cluster bomb such a load weighs 478 kg and can be used in different planes, capable of carrying and use unguided bombs.

Not so long ago, there is another version of a cluster bomb. While maintaining the main features of existing products PBK-500U cassette differs from it in the presence of its own funds management. Due to this prior to discharge 15 bomb submunitions can fly to 50 km. 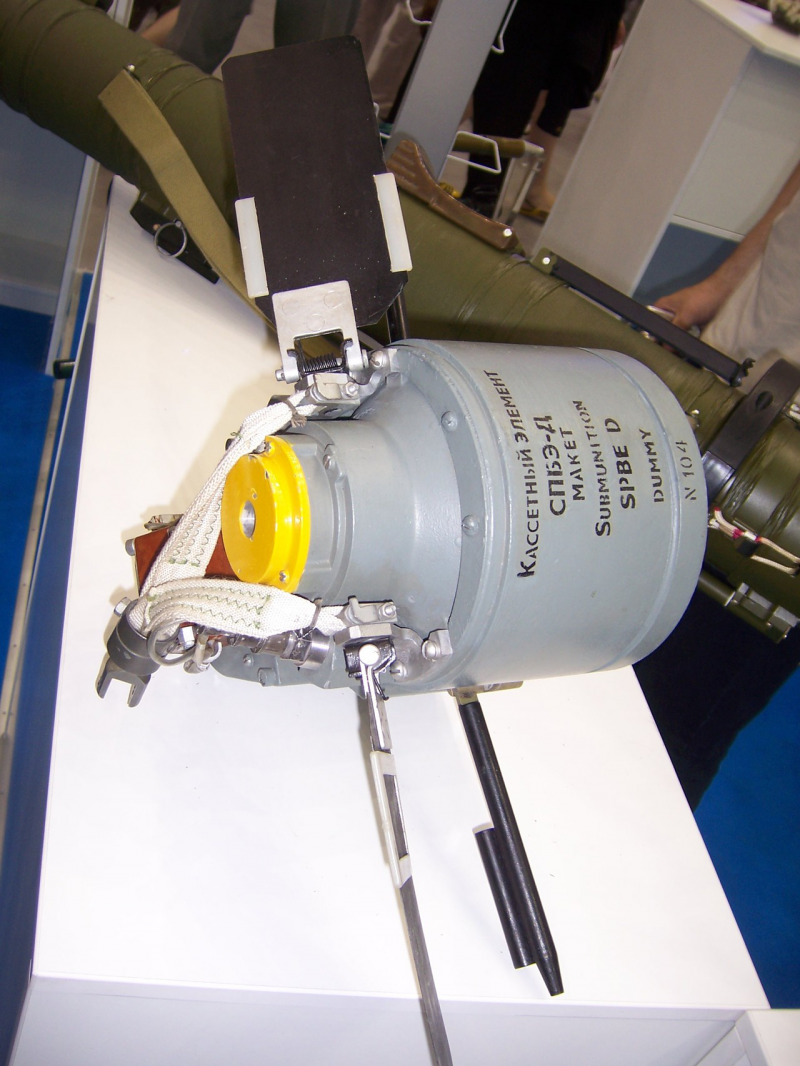 eventually another platform for militant elements began missile 9M55K1, designed for multiple launch rocket systems 9K58 "Smerch". Cassette warhead of this missile has five locations for combat elements. According to some reports, it uses upgraded products SPBE-D, that do not require a separate command element. among other things,, This allows you to noticeably increase the number of combat elements, and increase the probability of target destruction.

Unusual antitank ammunition SPBE family have corresponding working principle, of great interest. After reset or start job cluster bomb or missile delivers multiple submunitions in the target region. Further there is a disclosure of the housing with the ejection elements. Reset is carried out at a minimum height of several hundred meters. Immediately after ejection from the cartridge air flow pulls the auxiliary parachutes, designed to reduce the rate of fall of goods. With the same dimensions and weight, housing and parachutes, command and combat elements are reduced at the same rate.

Upon reaching a height 170 m command element, equipped with a radio altimeter, shooting commands the auxiliary parachutes and the disclosure of major. After that, the command element off from work, and all subsequent tasks are only fighting. Slings main parachute secured to the warhead casing, because of which the descent asymmetric combat element is tilted by 30 ° in the direction of the casing of the instrument compartment. Such position it retains until triggering of the warhead, or fall to the ground.

Descent combat element occurs with the steady speed 15 m / s. Due to existing stabilizers member rotates about a vertical axis at speeds of the order 6-8 rps. Proper combination of shutter speed, rotation speed, the width of the field of view and tilt combat element causes, that during the reduction of optical-electronic system gradually "View" circle with a radius of about 90-100 m. The field of view infrared system moves along the tapered spiral, wherein at each time it is ground portion diameter (depending on the height finding submunitions) no more 1,5-2 m. 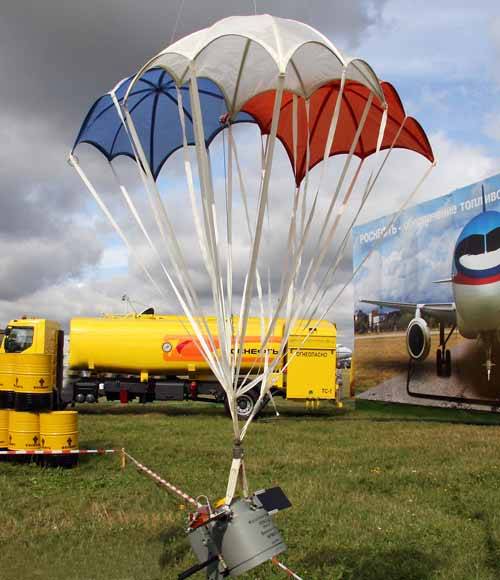 The product SPBE-D configuration of the shutter and the search target. photo Zonwar.ru

When detecting the thermal radiation, typical of armored combat vehicles, opto-electronic device instructs at undermining warhead. The explosion of the shaped charge leads to the formation of shaped-charge jet, consisting of a gas and molten copper. jet energy is sufficient for penetration 70 gomogennoy booking.

If, during the descent of submunitions could not find the target, it simply falls to the ground. According to some reports, then an infrared system continues to monitor the terrain and looking for targets with the characteristic thermal signature. In this mode, homing combat element is something like a terrestrial antitank mines. Operation in this mode continues until the battery production. After that the product is switched off.

The known data, SPBE submunitions "Motiv-3" were taken into service in the late eighties. Initially this gun was intended only for aviation, and was to be used one-time cluster bombs. Cassette submunitions receives designation of RBC-500 type SPBE.

A few years later an improved version was created SPBE. Project SPBE-D "Motiv-3M" provided some restructuring combat element, allowed to give up a separate control device. In the case of SPBE-D element and at the same time carries a warhead, and radar altimeter with the desired parameters. When this cylindrical body with additional side casing were retained. SPBE-D for aviation was adopted before the beginning of the nineties and was offered for use with the existing cluster bombs. Due to the failure of the command element 500 kg cassette now contains 15 Device combat supplies. 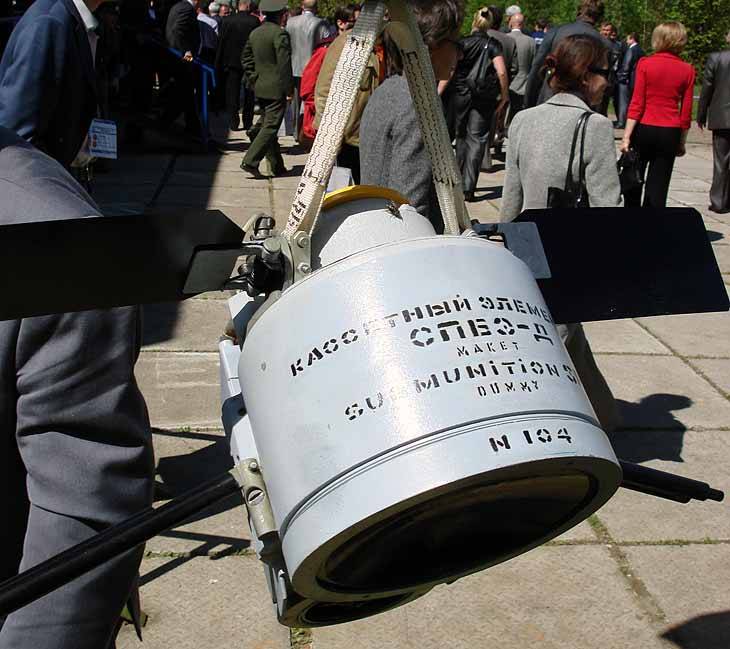 AT 1996 by missile 9M55K1 for MLRS "Smerch" was adopted by the Army. Each missile carries five homing submunitions version "D", no need on the part of teams. Characteristics of the motor shell settings allow you to deliver the combat elements at a distance from the 20 to 70 km.

AT 2016 the NGO "Basalt" presented a new development, develop ideas existing projects. The forum "Army 2016" was shown gliding cluster bomb PBK-500U "Drill", Curb submunitions SPBE-K. Magazine with a special aerodynamic shape, using satellite and inertial navigation, is able to plan for a range of up 50 km and delivered to the target area 15 submunitions.

Deeply modernized element called SPBE-K differs slightly increased size and different form of housing. The cylindrical body of the parachute compartment and crew compartment now have greater elongation, and instrumentation section differs increased height. probably, All these improvements are directly related to the use of the combined objectives of search engine. Besides infrared optoelectronic device for armored vehicles, radar detection system is now used. The latter has the function of identification of nationality ground object. 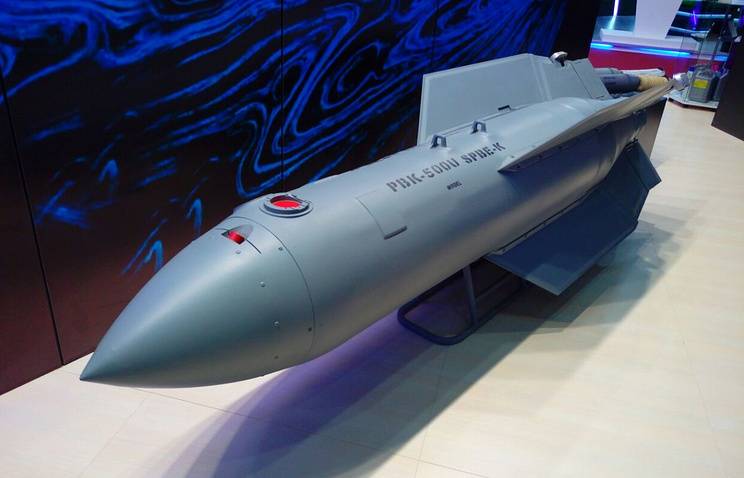 As far as, Until recently, homing submunitions family SPBE not been applied in actual operations. They came too late, to go to war in Afghanistan, and terrorist organizations do not have enough armored vehicles in Chechnya. Nevertheless, original weapons have been able to try out in practice. In October 2015 year - just a few days after the start of operation of air and space forces in Syria - it became known, that ammunition Russian bombers includes RBC 500 SPBE tape.

There are reports of several cases of use of such weapons against technology clusters and manpower terrorist organizations. In all cases, it was the successful defeat of several armored vehicles. At the same time of the fighting cells, not finding by a goal, fell to the ground. Different sources have carried pictures lying on the ground SPBE products, but images of burnt armored vehicles for some reason have not been published. probably, in this way the enemy was trying to keep a good face on a bad game is extremely.

known, that the system of several models of the family "motif-3" are mass-produced and delivered to Russian forces, who use them, along with a number of delivery vehicles. NGO "Basalt" regularly showing their designs at various military-technical exhibitions, but export orders SPBE, as far as, There are no. Not the least role in this development played the existing international agreements. AT 2008 year, more than a hundred countries - that is curious, basically do not have a developed defense industry of its own production and modern systems - have signed the Convention on Cluster Munitions. As a result, the international market of such weapons, regardless of its purpose, down sharply.

Target lesions tanks or other armored vehicles from the upper hemisphere can be solved in different ways. Projects homing submunitions "Motiv-3", by NGO experts "Basalt", propose and implement the most complex version of the armored attack, but they have a number of characteristic advantages. Martial elements may be used, and aviation jet guns for the application of effective strikes against concentrations of the art. The probability of success is large enough defeat, which was confirmed as testing, and during the actual conflict.