Features of the movement in the settlements 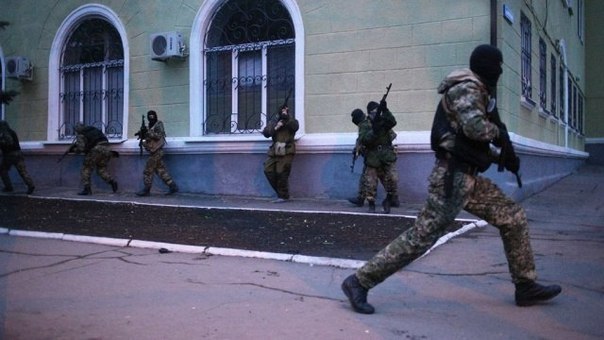 Features of the movement in the settlements

When driving in the village meeting with the enemy can happen at any moment. Shooting will take place at the same time at a very short distance, and often in abutment. Therefore, weapons must be ready for immediate use.

The machine must be charged, Unlocking and have a round in the chamber. To be prepared for the immediate opening of aimed fire, should move, not taking his rifle butt on the shoulder, wherein the trunk is lowered down slightly. When moving between the buildings barrel rises, controlling window. Another way to hold - upiranie butt in the elbow bend. Barrel thus directed upwards. This method also has its adherents. The barrel is rotated in the same direction, which looks a fighter.

The village is placed on the machine sight 100 m, Fuse - to conduct firing in single-player mode. Firing bursts effective only in some cases. for example, a sudden meeting of a group of enemies at close range. In most situations, reasonable to shoot single shots. The effect is no less, and significant savings cartridges.

Firing a machine gun, You do not need to wait for the complete emptying store. If the store is partially empty and there was a pause in the battle, You can change the shop. And it is possible to finish the missing cartridges. To do this, you need to wear loose cartridges in a special pocket, that securely fastens. The shooter was able to control the flow of ammunition, starting to equip shop, you need to insert three tracer cartridge. All of them can not shoot. Once I flew at least one tracer, We need to change the Shop.

Better, If the remaining cartridge in the chamber, in this case do not have to spend time on the shutter distortion. However, in the heat of battle is doubtful, the soldier thought about such trifles, as counting emitted rounds. In any case it is better to change is not completely consumed Store, than at the critical moment to waste time reloading.

If you throw away the empty shops, have problems. But in a tense situation it is better not to lose time on their premises in the Vest or pouch. Especially in the heat of battle, you can mix up the empty and full of shops. When firing from a stationary position empty shops must be rejected in one place. In the event of break they need to equip and put on themselves.

Rocket-propelled grenade (reusable) It must also be ready for immediate use. However, you can not always use it in the place, where there was a need. This is due to the danger, posed jet stream at a shot from behind grenade. Therefore, the thrower must not only be attentive to the choice of position, but also when moving constantly be aware of the possibility of immediate firing. After the shot coming from behind may suffer comrades. In the rain on the grenade is put package, not interfering shooting.

Underbarrel launcher must also be ready for rapid application, that is to be charged. On his guard (at least Russian SE-25) You do not need to put, as for the shot, and so it requires considerable effort, virtually eliminating the possibility of accidental discharge. should not fire from the SE-25 closer than 40 m, because in this case the pomegranate may not be able to get up on the combat platoon. It is dangerous to shoot at the windows of high-rise building, standing at its foot, because when slip garnet ricocheted and drop back.

All actions must be carried out in pairs (threes). The members of the couple have to constantly see each other and to know, where other comrades are. Such statistics do, but many men died from the bullets of their own comrades, mix them with the enemy. However, it is impossible to assemble groups, endangering others.

Can not be fixed in the open. BK Group “SWAT tactics”You must either move, or hide. Movement occurs quickly short dashes from cover to cover. Thus it is impossible to lose orientation in space. Always remember, which side their, how - strangers. In a dense housing and the promotion of non-uniformity of different groups and individual fighters situation is changing very rapidly. therefore, if you shoot around, that moves and suddenly appears, you can get into their.

For confident orientation often need to stop (under cover) and inspected. Movements should be scheduled, not chaotic.

before, they escape, you need to clearly understand the direction and purpose, above which a fighter must again take a protected position. Only in the case of exposure to the sudden enemy fire should immediately occupy near shelter. Dense fire, and generally to reduce the risk and increase stealth, movement can be performed by crawling on all fours, or. You need to move along the walls, bushes, debris and other items, not running out onto the open spaces. To overcome the dangerous space is often used smoke. It saves on the impact of fire.

Any movement must take place under the guise of a mutual. Cover is carried out not only when traveling, but also in the event of pauses for various reasons: Giving help, recharge, etc.. P. At the same time should be maintained voice contact. If necessary, get out of active combat this it is necessary to inform the partner.

When promoting an unfamiliar locality need to remember the way, since there was little hope of conductors.

Passing under the windows, you need to bend down, and the windows, below the waist level, jump. Moving indoors, You should also avoid the appearance in front of windows and breaks. The enemy can strike fire from another building or another external position.
It is necessary to focus on the "right-hand rule". It is, that person physiologically easier and faster to transfer the fire to the left. This is true for right-handers. For left-handed all the way around. That is, the movement of weapons outside, be it a gun or automatic, less natural and comfortable. The transfer of fire and maintenance of the right of aimed fire (for right-handed) or left (for left-handers) It is associated with the need to rotate the body. The exception is the firing of the gun with one hand. This rule implies much, and then it will still be referred to.

When choosing a firing position or under the supervision necessary (then everything for right-handers) peek and fire right side of the object, behind which you hide. In this way, It will be protected almost the entire body, with the exception of the right shoulder and arm, as well as the right side of the head. When shooting arrows to the left of the obstacles have to be fully disclosed. The appearance of the head of the subject of protection at all is unacceptable. The closer to the ground will be the head, the less it will be evident to the enemy. Better, if there is a mirror (better on the bar), with which you can conduct surveillance without exposing himself.

However, the mirror can give glare, to unmask the position. Therefore, when you use it you need to consider, where the sun. In general, given the choice, better direction to go out of the sun, that it blinded the enemy, not you.

In case of need to fire the left of protective barriers, better to shift the machine to the left arm. Although it is uncomfortable and unusual, but it is much safer. The same applies to a gun shooting.

When rounding the move kakogolibo obstacles (eg, corner of the building), you must do it right. In the event of a sudden meeting with the enemy and the need to immediately open fire weapons will be immediately directed to the enemy with a minimum of "openness" fighter housing. For rounding the corner to the left is also necessary to shift the machine to the left arm. Should not be afraid of inconvenience, because at such short distances to miss with a machine gun, even an awkward situation difficult. Or it is necessary to send forward lefty.

Getting around corners, you need to stay away from them. Then the panorama will be opened gradually and surprises will be revealed in time. Rounding need to produce slow. In this case, the fighter has to be ready both to open fire, and to fast the bounce back.

In general, the movement should be slow and cautious. In addition to the front direction danger is posed by various dormer windows, breaks and openings, which may be arranged as above, so below. Find in them the presence of the enemy is very difficult, while he himself will not give. Besides, always the danger of falling in the mines. In the conditions of the buildings is mainly stretching and various "surprises". Stretching can be delivered to all, anything. Very often mined doors and various valuables (eg, recorders, TVs). The greatest risk are subjects, the movement of which is a logical and predictable. Mines are being laid in the ground, the most convenient position for firing. Often mined piles of various objects and dead bodies. Since this is usually done in a hurry, is able to select the most simple. Under the corpse is placed grenade without a ring.

For the prevention of flash is not out of place at all the door a few shots. For the same reason you can not stand in front of the door itself. A metal door should be cautious, since there is a risk of rebound, especially from small-caliber bullets and low penetration. Knocking doors kicked quite risky.
Modern ammunition has a very high penetrating ability and allow the enemy to strike, located within the walls of certain materials and other, at first sight, durable construction. Often the soldiers psychologically accept for safe shelter is easy to sweep things. Remember that you need to, not just hiding from the enemy, but trying to hit it through cover. Striking fire can be maintained even after a wooden floor or stairs.

before, you enter the room or go around the corner, you need to throw a grenade. Should throw a grenade with the slowing. That is, after the release of the trigger to survive two seconds, then throw. Such actions require composure, but you do not throw it back. After slowing down in three or four seconds - enough time to take countermeasures or shelter from the splinter. If the affected area will be companions, Some experts recommend to prevent them shout "Grenade!"Or" shards!». However, this shout warned enemies. Besides, there is no guarantee, that the companions heard a cry or have time to react to it in a timely manner.

Therefore, it is wise to throw a grenade, certainly know, that none of their not suffer. Yet conditional cries are necessary also in case, when the enemy throws grenades. All, who sees, We have a loud cry to warn her about it. In this case, it is necessary to jump into the nearest shelter or duck around the corner and open his mouth, to from the blast did not damage the eardrum.