Gauvin continues to boil over the deaths of Russian ChVKashnikov in Syria.

I have already written a post, What's on 100 killed must be at least 300 wounded. And as many more survivors (minimum). ie. in the area of ​​operations allegedly acted almost full-blooded regiment. This is the nonsense. Secondly, you represent, what to bring 100-200 dead? And the man 300-600 wounded? For their removal is needed perhaps part of health coaches. In the absence of M D we perform the role of aviation santransporta. How many corpses will fit in the IL-76? Living people placed in the area 200 human, corpses lying on a stretcher, safely be multiplied by two. ie. It was to fly at least 2-3 IL-76 only with corpses. Where are they? A wounded? it 300-600 wounded. After Christmas attack took two bead Hmeymim, slaughtered wounded, and there was a man 20 wounded. In this case, multiply the number of boards on 10. was sending 10 "Scalpel" of Hmeymima? A 2-3 "Black Tulip"? And before sending the body should be kept in the morgue or Jableh Latakia. After arrival in Rostov. In the modern world, when the camera is in every iron, information not hide. Where photos of corpses? A wounded - they were to be spread across Rostov, Moscow, Peter, Omsk, Tomsk and beyond. At least one medic so would remove the arrival of the sad cargo from Syria. There is nothing. A funeral? Can you imagine, that is to bury 100-200 young boys? Special, Considering, that most of all ChVKashnikov Red Zadrischenskov and Small Purdy. Yes, there is the whole city comes to a funeral. The network must be dozens of videos. And even, if the parents and relatives of the deceased will receive a penny of silence, be intimidated, friends, favorite, classmates dumped into the network, special, when the country will disperse 100-200 coffins and a hundred amputees. Where is it?

I say, ratio was not 1 died on 3 wounded, tk. Muzhikov finished off 4 o'clock. OK. Show me at least one helicopter, which can over 4 hours fight. And the shells are entering cheat codes are? And if they go, while there is another wave, on the battlefield all sit, like sheep, and wait, that they will again mutuzit? Or depart regroup? And how confident, that aviation wiped out every living thing? Two and a half years, the participation of our videoconferencing not have put anyone to think, daaaaleko that aviation is not a panacea? What good old law, that the territory is captured, Only when hanging over her eggs infantryman, it is even works. Whether it's Vietnam, Afghanistan, Chechnya or Syria. Yes, in the constellation Centaurus it will work. Just eggs infantryman replaced by a humanoid robot rolls.

More such moment, there are close to the Syrian air defense (which in other province brought down as much as 16 F-Jews), perhaps, RealFanLipetsk armor. What for amer tempt fate and 4 hours hanging over the battlefield, changing helicopters to develop ammunition? wait, that fly? Or from the rear to catch up with the lads and MANPADS zhahnut hanging on purpose? 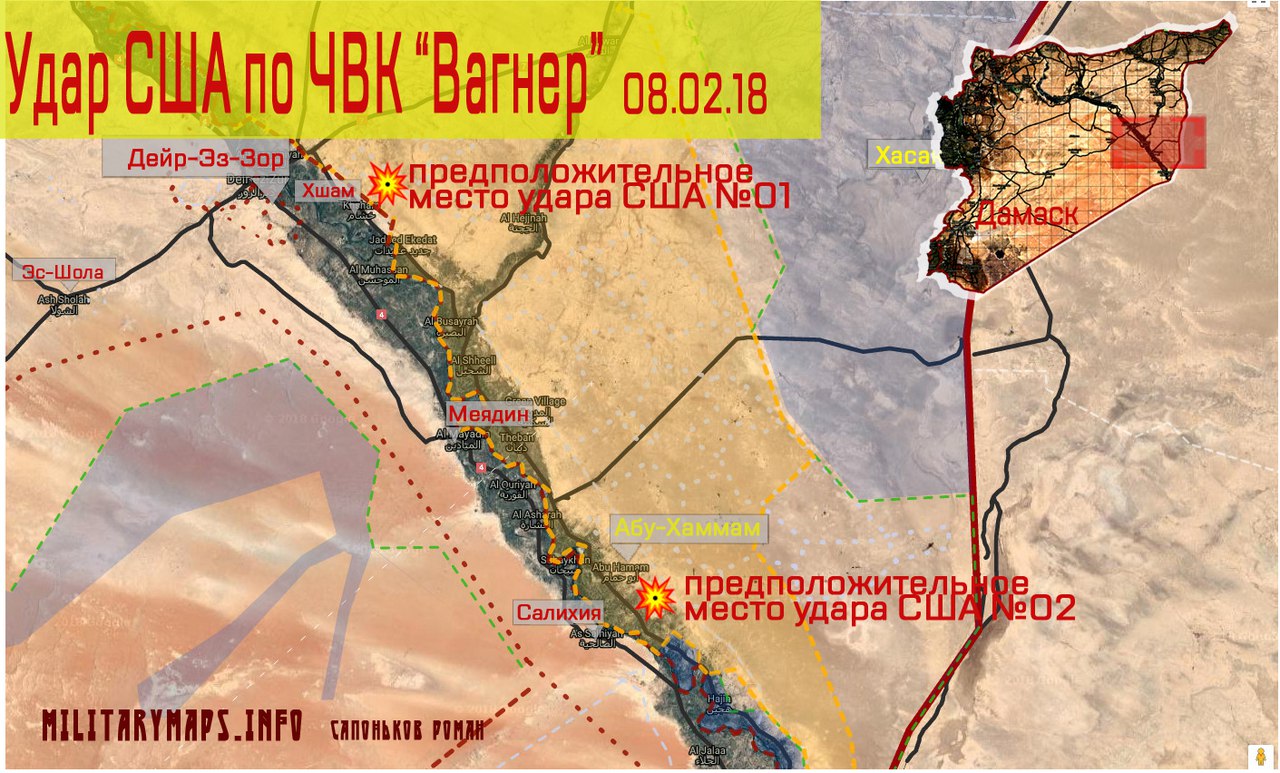 What was there? Here basin (http://tass.com/world/989092) He writes, that Syrian forces and militias had suffered a blow to the east of Salih. And then write all, including the Ministry of Defense, that the blow inflicted Hshama east and Al-Tabii, in the area of ​​refinery Conoco. the accompanying map. scatter 80 kilometers. "VashingtonPost" referring to the Kurdish warlord says (https://www.washingtonpost.com/blogs/post-partisan/wp..) to fight in 50 miles to the southeast of Deir ez-Zor. Or people in Russia and abroad do not understand, what's going on and where, or went confusion because of the different presentation of information to the media. It could be two fights? theoretically could. In one killed the Syrians, in another chop 20-30 people our.

More that confused. Funeral ISIS Hunters. This is purely a media project. When our PMC is cleaning the territory, it is necessary to show the media. Start the Syrians, who joyfully shouting chants, hoist the flag. Give a media cravings, generally. ISIS Hunters for this and sought to. Never and nowhere they did not appear in the reports of fighting, except lighting Prigozhinskih bodaniya for oil and gas. And then the funeral. Or even staging, that hardly, or they have collected for the next showing off, to report on the capture of the next dune in the desert, but not burnt slightly.

Who can be more beneficial for stuffing hundreds of dead? Foes Prigogine. No wonder the same Alexander Rogers, staff propagandist Prigogine, Article erupted angry with the fact of death oproverganiem prigozhinskih musicians. ie. quite the musicians could get under the hand, – accident or framed, – and then the enemies of the fake Prigogine vkinuli 100 dead. This benefit shows a mass stuffing me in a personal version of this people, which had previously been seen on stuffing the pro-Kremlin propaganda and disinformation.

Summarizing, despite the general hysteria, I do not believe in 100-200 dead. This loss at the level of the Great Patriotic, moreover, first half. Aviation is not omnipotent. iron 4 hour battle can not by virtue of the laws of physics (refueling, recharge, etc.) and basic security. If there was no control of the battlefield , may not be such a number of victims. We must look for beneficiaries stuffing inside the country.