Work on the bugs

Work on the bugs 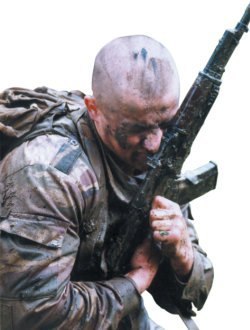 Question the Safety of personnel is not new weapons. This is the eternal headache of commanders of all units of all law enforcement agencies, everywhere and at all times. Who does not know long (OK, if "home") proceedings in respect of loss 1 (one!) 9-mm cartridges for Makarov pistol.
Or accidental discharge, produced some slobs. And with regard to misuse, use or illegal possession of weapons and ammunition, then sometimes it comes to the Bench.

And now - the trip to Chechnya. formidable. Our main task was to patrol assigned to the detachment of urban areas in the daytime, Guard commandant night and day and night performance of duty at checkpoints. Immediately the question arose to protect personnel from the emergency, associated with random shots and explosions of the.

Recorded many cases, when neglecting safety norms led to the death and injury of soldiers and police officers. But official statistics do not reflect the real depth of the problem, since in most cases the commanders try not to wash dirty linen in public and losses are charged to allegedly committed militants attack.

My comrade, also the commander of OMON, I told, as one of the officers of his unit as a result of psychological overload at night stood and, sitting on the bed, I began to "shoot" around them from the organic PM, clicking the trigger. Fortunately, colleagues reacted quickly, and the cartridge in the chamber did not have the PM. Prior to this incident, the culprit commotion did not cause any concern, He was disciplined, not abused alcohol, at the time of the accident it was completely sober.

In one of the units of a random shot produced a machine gunner. Bullet flew into undisguised input checkpoint on the opposite side of the protected area and, ricocheted, I hit in the thigh another soldier.

Shot in the forearm as a result of careless handling of the pistol Stechkin within APC has received one of the SWAT officers. Colleagues also told, that the explosion in the dining room, which resulted in deaths and injuries in a COB, Nor it was "the result of getting shot from a grenade launcher enemy", as a consequence of too free circulation soldier with a hand grenade. I do not think, Without such accidents cost the Interior Troops and units of the Russian army.

We had our own experience and the prerequisites for an emergency. One of the men of Detachment handed his gun to someone, that he carried a weapon in the division location. In this case, the machine owner threw the cartridge from the chamber and unbuckled store, but because of fatigue or distraction mixed sequence. When his friend decided to seize the machine comfortably, accidentally pulled the trigger. We were very lucky: bullet hit the wooden floor and no one was hurt.

The basis of all these events is addictive personnel to arms, which is available virtually around the clock, and fighters must always be ready for battle. Wearing with them as much as possible of ammunition is also becoming an elementary rule of survival. Group “SWAT tactics” There is a relation to the arms and ammunition as an extremely necessary and essential items of daily use. Hence the decline in the perception of them as a source of increased danger.

Strict accounting of ammunition in a real war situation exists only in the imagination of staff officers outside the combat zone. No sane commander did not pass the ammunition, received formal, seized from the enemy, vyproshennye or bartered his comrades-in-arms. During the battle, no one will fill magazines for issuing weapons and ammunition. Similarly, taking into account only those munitions, are issued officially, and then retroactively.

It was interesting to watch the reaction of employees, after which free circulation with hundreds of rounds of ammunition and grenades units, leaving the service in his hometown, prepared in compliance with all necessary formalities 16 ammunition to the gun or a machine with 30 ammunition. Almost all of them made jokes at the expense of, They offered not to disturb the service weapons and bring plenty of ammunition in Chechnya, not to "trifle".

Another prerequisite for an emergency is difficult to overcome curiosity, habit with their own hands to deal with your problem in arms, simple carelessness. One of our officers, found near the post RPG-18, I decided, that he was holding the empty "pipe" and began to show his colleagues. There was a shot. By happy coincidence jet stream and pomegranate passed between officers who stood. Officer, perfectly familiar with the safety rules, he who taught his subordinates, a few minutes made two blunders: raised foreign object and inadvertently handled the weapons of war.

Greatly affects the fatigue of personnel, especially after a night of reflection attacks. One of the employees, participated in the six-hour night battle, after an accidental shooting in pulepriemnik device for unloading arms in surprise saying orderly: "You imagine: it seemed to me, I unbuckled the store and put it on the bedside table. And suddenly shot! I woke up, and the store wearing ". unit commanders, performing specific tasks in specific conditions, should consider the possibility of such manifestations at the exit of personnel from stressful situations.

To avoid trouble, command of our unit has established the following order. Personal weapons soldiers discharged under the control sentry at the entrance to the detachment location at specially equipped pulepriemnika. also checked, that of all the grenades have been unscrewed and removed the fuses shots from grenade launchers. Weapons were stored in close proximity to each employee, it usually hangs on the wall next to the remedies. Personal Ammunition placed in a webbed, hanging next to the weapon. Carrying Service posts commandant perimeter, and the presence of armed attire round the clock at the entrance to the location of the provided protection against surprise attack and sufficient time for placement of personnel in combat calculation.

Service at checkpoints usually carried out not in three shifts, as provided by the Charter of Garrison and Patrol Service, and in two. The personnel of the little, a lot of problems. Waking change in generally impossible to allocate a reserve. Therefore, taking into account the possibility of a surprise attack on a checkpoint, I had to take some risks. employees rested, having at hand protective equipment. And their weapons kept charged in the pyramid next to the place to relax. Safety measures controlled shift supervisor.

It would seem, basic rules, which are observed in any of the military unit. But in many Omonia, Coll and other divisions, even when there is no such need, It decided to keep all the weapons on the arms and charged.

Our situations are different, and had to be placed in different ways. And in a relatively normal buildings, and in tents, and in the dugouts. And sometimes I had something to depart from the established rules in the squad. But the general order and the habit of staff to control their weapons allowed us to avoid the non-combat losses for the entire period of travel to Chechnya.