At the arms exhibition, held in Singapore, under the Singapore Airshow program 2018 a variant of a ground wheeled combat robot is presented “Jaeger 6”. The robot has a 6x6 wheel arrangement and is capable of carrying the maximum payload in 250 kg. Jaeger 6 developed by ST Kinetics. It is a manufacturer from Southeast Asia with a predominantly Singaporean capital (Singapore Technologies Kinetics Ltd).

The new combat robot is capable of performing various types of operations during 48 hours. On Jaeger 6 implemented, as stated, modern control algorithms, which allow it to switch to semi-autonomous operation. In particular, the system can be controlled by a person using a special control unit via Wi-Fi or 4G.

The robot has a set of video cameras and special sensors. The total weight of its standard configuration is 750 kg. Jaeger length 6 – 2,5 m, width - 1,5 m, height - up to a meter (excluding equipment, installed on the platform). 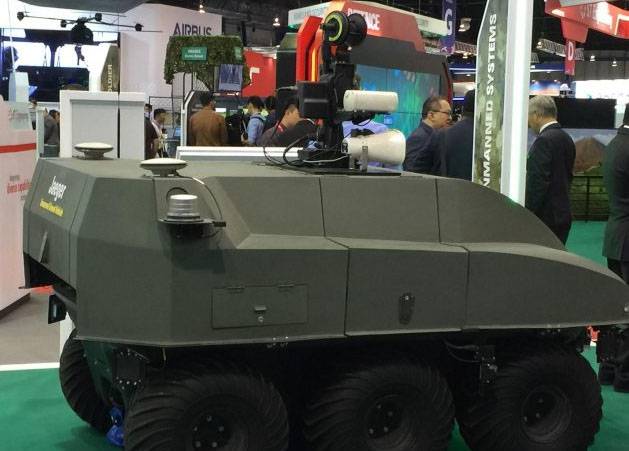 The robot is able to move at speeds up to 16 kmh. The movement and operation of its systems is carried out through the use of a diesel generator, as well as the battery.

reported, that the robot can be equipped with various types of small arms, as well as an automatic grenade launcher.