As reported by the American edition “Defense News”, Czech Defense Ministry canceled the modernization program 33 propelled 152mm howitzer Dana vz.77 wheeled chassis 8x8 Czech army, and instead announced acquisition plans 50 self-propelled howitzers 155 mm / 52 “in one of the NATO countries”. The purchase of new ACS will be allocated to 10 billion CZK (to 490 $ millions). 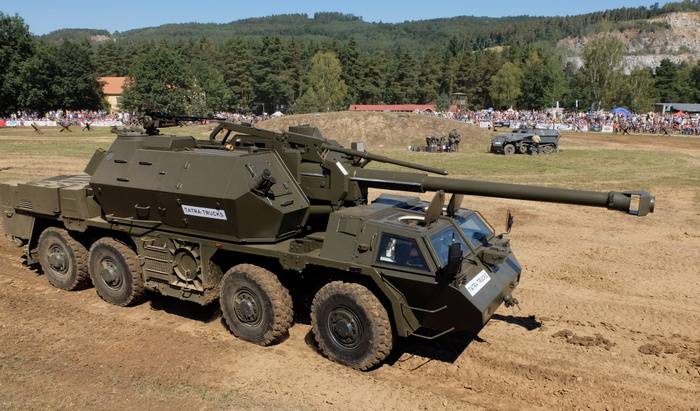 According to initial plans, Ministry of Defense of the Czech Republic intended to modernize 33 self-propelled howitzers Dana gauge 152 mm / 37, and highlight 2,5 billion crowns for the purchase abroad by 2022 year 17 Modern self-propelled howitzers 155 mm / 52, with a range of up to 40 km, and further 2 billion kroons – for the purchase of appropriate caliber ammunition 155 mm to them. Now instead it planned to purchase immediately 50 Western ACS caliber 155mm / 52, He writes a blog bmpd

Dana M1M prototype was first demonstrated in August Tatra Trucks 2016 of the year. Upgraded ACS has a new cab with improved ergonomics and security, new filtering unit, as well as air conditioning and heating. Staff ACS engine Tatra T-930 got the upgrade package in order to increase the resource and efficiency and improve compliance with the latest environmental requirements. On the chassis installed a new semi-automatic transmission Tatra-Norgren.

It was also reported, that Slovak companies MSM Martin and ZVS Nová Dubnica in partnership with Czech company Explosia had to supply retrofit ACS Dana new artillery ammunition caliber 152 mm. In particular, in ammunition it was planned to introduce a new high-explosive shells DN1CZ improved aerodynamic shape with a bottom by the gas generator and the sleeve charge R740, having a firing range of the weapon in Dana 25,5 km (Maximum range of fire is the usual shell 18,7 km).

Self-propelled howitzer Dana on 8x8 wheeled chassis (based on chassis Tatra 815) It has been developed and made commercially now ZTS Dubnica (Slovakia) from 1981 by 1993 years. There were together with experienced and pre-production samples produced 672 system, of which 415 delivered to the Czechoslovak People's Army, 128 – Armed Forces of the USSR, 111 – Polish Army and eight have been exported to Libya. Later improved versions Ondava have been developed based on it ZTS Dubnica (152 mm / 47 gaubiceй), Susan (to 155 mm / 45 gaubiceй) и Zuzana 2 (to 155 mm / 52 gaubiceй), of which only produced serially Zuzana (16 It was delivered and the Slovak army 12 – Cyprus).