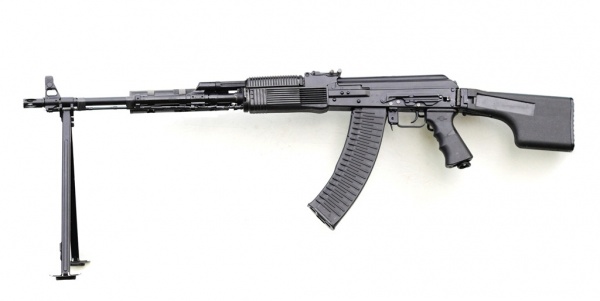 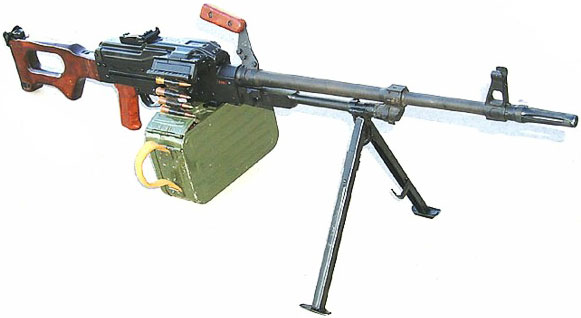 Again, for the development of the PKK (caliber 7,62 mm) We took AKM rifle (Kalashnikov AK version 47). When designing this system was able to solve one of the most important tasks - the standardization of small arms. Kalashnikov machine gun got arrangement, performed on the same principle with AKM, interchangeable with standardized nodes and ammunition. As a result, first the Soviet army in the world had a Kalashnikov machine gun and an infantry machine with universal design. This was a huge advantage: 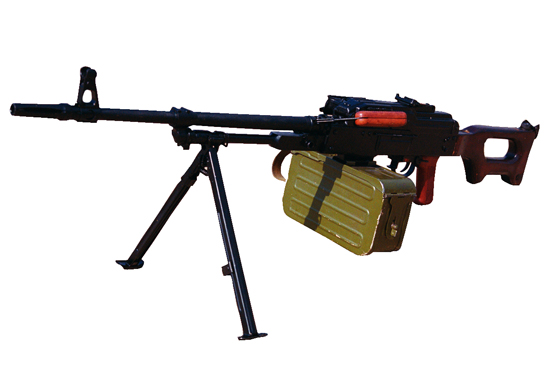 The history of the Kalashnikov gun

The Soviet Army to the beginning of the 1960s did not have the modern samples of uniform machine guns. Standing at that time in the army arsenal machine gun Goryunov had such characteristics, reliability and capacity, but its weight was a big, and it was a weapon with limited mobility, which does not meet the requirements of any VDV, no ground troops. competition was organized for the creation of new weapons, which was attended by many well-known designers. As a result, we took a machine gun armament, who developed a team led by Timothy Kalashnikov. He had a caliber 7,62 mm. The new weapon was both reliable and easy, and its performance on all parameters were significantly superior American counterpart M60.

AT 1961 year RPK entered service. AKM and RPK Machine had wide unification. The manufacturer of the PKK made Vyatskiye Polyansky plant "Molot".

Thanks to, AKM rifle that became the basis for the machine gun, been achieved:

Driving device PKK and ATM was similar, most of their parts and components are interchangeable. Rifles and machine guns were identical parts, that provide a wide maintainability weapons arsenals and military workshops of military districts. Easy disassembly and identity with AKM provided it easy to study in the army.

AKM became the basis for the PKK, so the gun has the following design changes:

PK machine gun, as well as its modification, as AKM rifle, actively used in the past 30 years in almost all military conflicts. Machine gun Kalashnikov modernized proven itself effective, reliable and powerful weapon, quite often it is used and Western troops. A certain number of PCM contained in the Israeli army has a limited standard weapons.

RMB served calculation, consisting of two people. As a result, disassembly and assembly is faster RMB. Attached to the gun unit for printing tapes, spare barrel, 600 cartridges - 2 tape on 100 rounds, and 2 on 200. The total weight of the entire set of RMB is approximately 30 kilogrammam. The calculation can also get a night sight and saw Samozhenkova (the weight 9 kg). During the Arab-Israeli wars Marines Egypt often installed armor sights on PC, that allows you to aim fire over 1800 m.

The main options for the Kalashnikov gun

Despite the large degree of commonality with the AK-74, RPK-74 design has significant differences, that due to the specifics of the application of machine gun as a weapon fire support. changes were: trunk, insert receiver, fixed non-removable bipod, mounted slotted flash suppressor. Consequently, the disassembly and reassembly of the PKK-74 more evolved.

FCT - Kalashnikov tank machine gun, which is used for the assembly of armored vehicles, tanks and other war materiel. It performs automatic weapons to attack firepower and manpower.

As a result of unification of arms in the Soviet Army 1962 SGMT year change as a tank machine gun adopted a PBC. Kalashnikov due to the specific application PCT combat made several changes in the gun structure. In particular, this:

Ammunition for the PKK