Observation of the behavior of animals. 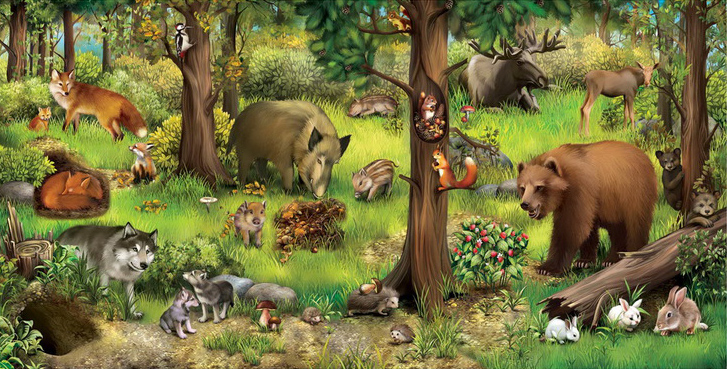 A Scout is to perfectly understand the behavior of animals and birds. The behavior of domestic and wild animals, as well as the birds always conditioned by any changes in the environment. This is because the, that is inherent in all animals the instinct of self-preservation, most often seen in relation to man in the form of passive-defense. According to the consternation of the animals can accurately determine the presence of human or approaching it.

When resting, the animals and birds are asleep, rest, heated by the sun, bathed in water or sand, tidy feathers or wool, drink, are eating, lurk and catch prey, fed babies, sing.

Anxious or frightened animal (bird) suddenly wakes up, Rest stops and heating, food and foraging, games, singing, is attentive, It freezes in a tense posture, looking out for, listens, sniffs, cork, leaves, runs or flies, It emits an alarm sounds and the hazard warning. And the cry of birds and beasts growl, who saw a man, very different from the sounds, issued them with other anxiety conditions. Here's what some of the characteristic features of the behavior of animals and birds:

cautious. An animal or a bird sitting or standing perfectly still, head lifted up or extended forward.

wary of an animal body normally as if squeezed in readiness to pounce. Bird with several squats, to push its feet during takeoff.

scrutinizing. The neck is elongated in the direction of an object or alarm up.

Bear, hare, squirrel, chipmunk trying to get up, squirrel rises on its hind legs, a bird drawn on his feet.

In mammals, face looking straight to the alarm object. A bird's beak is directed somewhat away from him, as they (except owls) considering the subject of one eye.

sniffing. When an alarm occurs, the animals enjoy the top flair: shows his teeth, neck stretched horizontally and air is drawn nostrils, making short movements of the head.

Escape or uletanie. Alarmed by the animal is first thrown to the side, and then rotated in the direction, the opposite of dangerous objects; birds, away from dangerous objects, fly without turning.

With the sudden meeting with danger while driving an animal is usually drastically changes its direction. Some of the animals for the first time gave a short escape popping sound.

Horses and dogs are able to detect the appearance of man, not only with the help of hearing, but also the sense of smell. The horse feels a person at a distance of 150-200 m and wary. At the approach of a predator (wolf, bear) it reacts snoring. Dogs, having a highly developed sense of smell (at 11,5 thousand times stronger, than humans) and a good ear (5-6 times better than a human), capable of detecting both the human, and left their scent trail. When a man approached the dog is attentive always.

Gazelle and saiga react to human movement within a few hundred meters. Simultaneous and fast movement in a certain direction - a sign of fear and escape from it. If the animals suddenly and at the same time scatter in different directions, It means the person is in the immediate vicinity or among the animals themselves.

The behavior of birds. Anxiety in birds is reflected in the restless movements and shouts. This is usually, when a person is in the vicinity of the nest or brood.

ducks. Alarmed duck cranes his neck and head makes quick and short nodding motion, staring at the alarm object, with its beak pointing towards. Noticing danger in flight, She quickly steer rises.

vultures. Accumulation of vultures, describing circles in the air at a relatively low altitude, means, they found prey, feed and someone they scared.

crows. If a crow near the nest frequently publishes frightened croak, it means, that somewhere near sneaks man. In this case, a crow or sits, or flit from tree to tree tops on the most. The advent of cluster and especially crows in the woods in winter, away from the housing, It indicates the presence of human. They also have a habit of circling over the spot, where the motion is on the ground.

amphibia. If the snake, lizard, marsh turtles, green frog basking in the sun, we can conclude, that are not held for 5-10 minutes before the man. And vice versa, the absence of their usual location in the field indicates that, that has recently undergone a person here. "Concerts" green frogs, rumbling green frogs, trill mean Hylas, there, where the sound of sounds, everything is quiet (no man), a sudden and sharp smolkanie their human appearance suggests.

All these signs of the behavior of animals and birds scouts need to know and take into account in its actions.