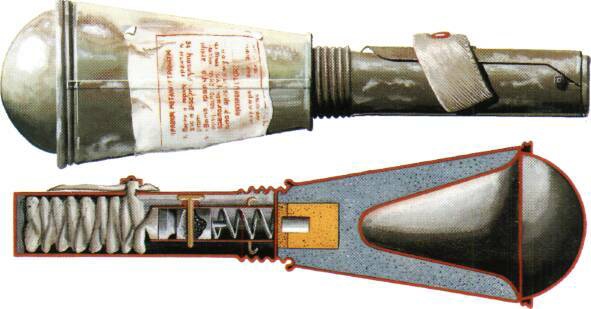 Manual antitank grenade (RPG-6) It was developed by a team of designers MZ. Polevanov, LB. Joffe and NS. Jitka in the middle 1943 g. and in September 1943 g. Grenade passed field tests on captured tanks (Ferdinand self-propelled gun, with frontal armor to 200 mm & book bead to 85 mm). 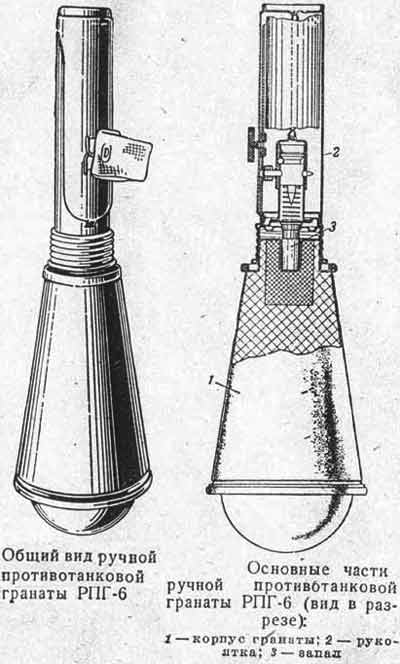 The upper body portion, neck, It has a thread, for screwing the handle. Inside the case are placed bursting charge, serves to fracture armor, and nest under the fuse which also serves as a housing cover. Bursting charge explodes from the explosion of a detonator fuse; it is safe in storage grenades, and while handling it.

The handle is used to throwing grenades and convenience to accommodate the impactor, stabilizer, and the safety mechanism. It consists of a handle body, abalone and nuts. The lower end of the handle is welded nut, serves for screwing the knob on the neck of the housing grenades. On the side surface of the handle has a round hole; Checks for drummer, eyelet pin, safety of the fixing bar on the handle body, and an opening for projection, available on the bar. There are two holes in the upper part of the handle for attaching the stabilizer strips. The firing mechanism is located in the handle body and consists of a sleeve, calyx, clamping nut, drummer from the shore, safety spring, ball and protective cap with cord. 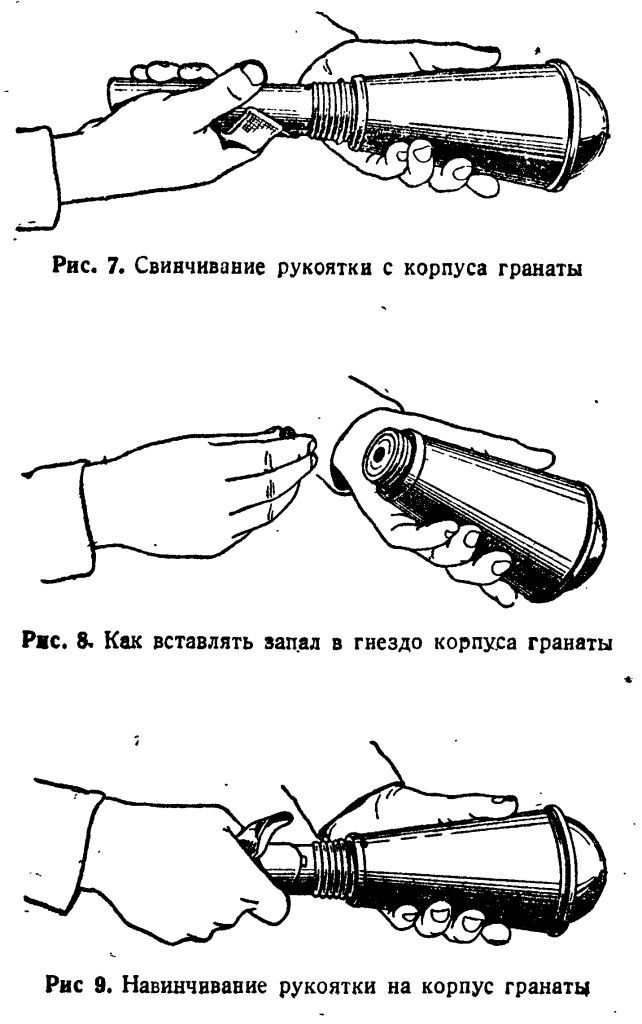 The sleeve serves for the hammer assembly. In the middle part of the sleeve has two circular holes - one for checks and one for the ball. Cup, welded to the sleeve, It serves to connect the cartridge to the handle and to lock the safety spring. In the center of the cup has a hole for the tip passageway upon impact of a grenade barrier to pinholes detonator capsule. Clamping nut is used for fastening sleeve with a cup to the handle body. A stinger firing pin serves to ignite the primer detonator ignitor. The safety spring prevents the firing pin from premature pinned grenade fuse in flight.

The ball when throwing the grenade keeps the hammer in the upper position until after the checks complete loss disclosure stabilizer. Safety cap serves to lock the ball in the hole and the annular groove of the sleeve impactor. It has two holes for passage checks and donyshke eyelet for fastening lace, whereby the protective cap is pulled off the sleeve to the hammer flight. The stabilizer serves to impart garnet directional filter to provide a convex hitting the armor housing bottom.

The stabilizer consists of two large and two small strips of cloth. Large cloth tape attached at one end by means of washers and rivets to the body of the handle, and the other - to the bottom safety edge. In the middle of one of the stabilizer anchored one end of the lace tape protective cap impactor.

The safety lever mechanism consists of checks, spring checks, safety edge with the bottom and pin. Check consists of a pin and cap and serves to hold the striker in a combat extreme, the top position before throwing the grenade. The spring serves to eject the checks and discard the protective strips at the time of the throw grenades. Safety bar with the bottom serves for closing the handle body and extraction of the stabilizer from the handle when throwing, and to hold the checks in the socket handle to throwing grenades.

1. Take the handle of a grenade in his right hand as, to strap tightly against the body rukot yaki.

2. Hold your right hand grenade for the handle with his left hand to pull the pin.

3. Swing and vigorously throw a grenade at a target.

And drummer and a safety cap exempt, but the striker continues to be kept in the upper position of the ball and the safety spring. On the flight stabilizer tapes completely stretched out arm, and further provided than flying forward hull bottom grenades. Tapes using the stabilizer lace tightening the safety cap with the liner, why a ball falls out of its nest, releasing the hammer. On the flight, the drummer kept from moving forward only safety spring. When you hit the bottom of the grenade barrier drummer overcomes the resistance of a safety spring and its sting prick blasting cap. This causes instant grenade explosion. If a charged grenade was not thrown, the, without releasing the safety strap, insert the cotter pin, dissolve its ends and defuse the grenade.

The length of the grenade body 136 mm

The diameter of the grenade body 96 mm