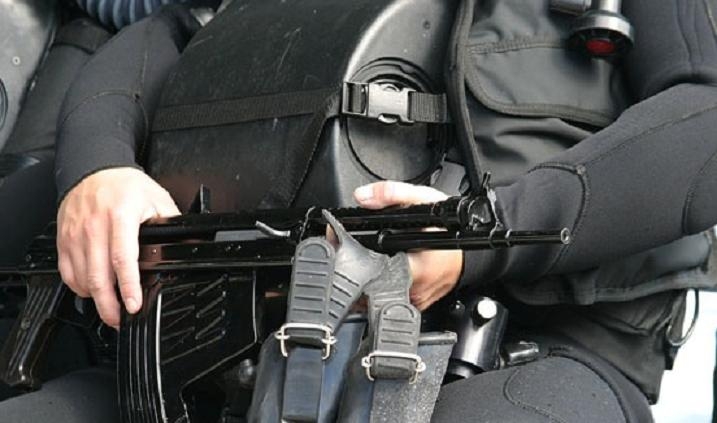 AT 1975 year has been adopted automatic special underwater (APS), for arming frogmen Naval Fleet of the USSR.

APS Automatic is the personal weapon of combat swimmer and is designed to destroy submarines and surface targets, as well as for protection from marine predators.

The development of weapons began in the 70s in the Central Research Institute of Precise Mechanical Engineering (TSNIITOCHMASH) designer Simonov VV. Designers Kravchenko About. P. Sazonov and P. F. Special cartridge was developed. Bullet cartridge IPU is a steel rod with a narrowing head part in the form of a double truncated cone. The cartridge case of traditional construction, it placed the propellant powder charge, discharge a projectile from the barrel and drives the automatic weapons, based on the use of gas energy, discharged from the holes in the wall of the barrel. Stabilization is carried out in water bullets due to the formation around the bullet cavity at dvizheniikavitatsionnoy. Formation and retention of the cavitation cavity provided by appropriate choice of the shape and dimensions of the bullet and its speed. The trunk is smooth machine, having no rifling, and the bullet mechanically interacts with the barrel. In air, the bullet is stabilized. In addition to the main cartridge designed MPST cartridge with tracer bullet. Ammunition automaton created using standard steel sleeve 5,45 domestic mm submachine gun cartridge 5.45mm, caliber rifled barrels through the fields. Diameter 5,45 mm barrels for rifling 5,66 mm, It is the same and the nominal diameter of the driving portion bullets 5,45 mm submachine gun cartridge.

Diameter steel bullets automaton APS corresponds to the outer diameter of the bullet cartridge 5,45 x 39 mm. But because the bullet ICS crashes into rifling, MTA barrel caliber bullet corresponds to the outer diameter and has a corresponding designation 5,66 mm. AND, probably, This fact, combined with the often poor visibility under the water led to the need to include in the ammunition cartridge MPST with tracer bullet, allowing to adjust the fire on the slopes.

Automatic APS works by using the energy of powder gases, discharged from the holes in the barrel. To ensure the operation of weapons and under water, and in the air, in such different density environments, Gas operated assembly is provided with a regulator. With it one can change the amount of allocated gases and respectively speed moving parts. However, when fired in air survivability machine is drastically reduced and 180 shots (under the water 2000 shots). The trigger mechanism with the rear sear, It allows a single and continuous fire. The firing mechanism udarnikovy. Locking barrel by turning the bolt. 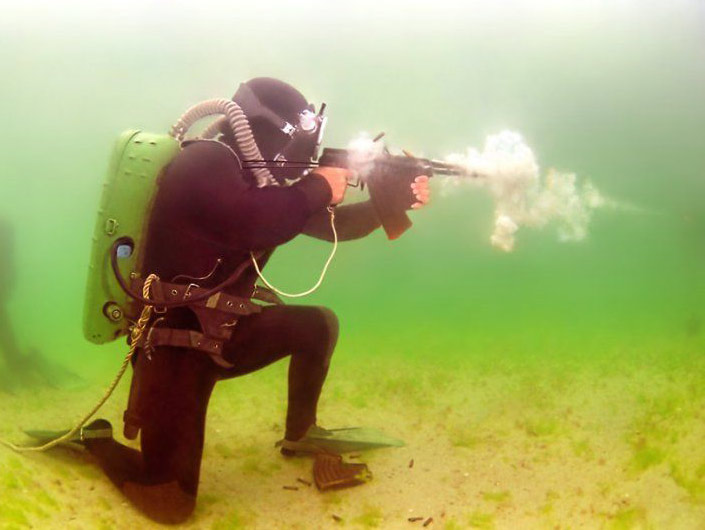 Significant dimensions cartridges along the length of lead to the necessity of introducing into the design options weapons, providing reliable operation. machine shop is in front of the spring latches, preventing skew bullets cartridges up, and separator cartridges. The receiver is placed cutter, which prevents simultaneous feeding into the chamber a few rounds. The unusual shape of the store due to the fact, that the feeder spring compared with cartridges has a small length. 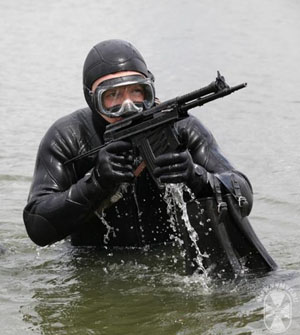 The length of the cartridge 150 mm

The height of the machine without magazine 187 mm

The width of the machine 70 mm

The length of the machine with an extended butt 823 mm