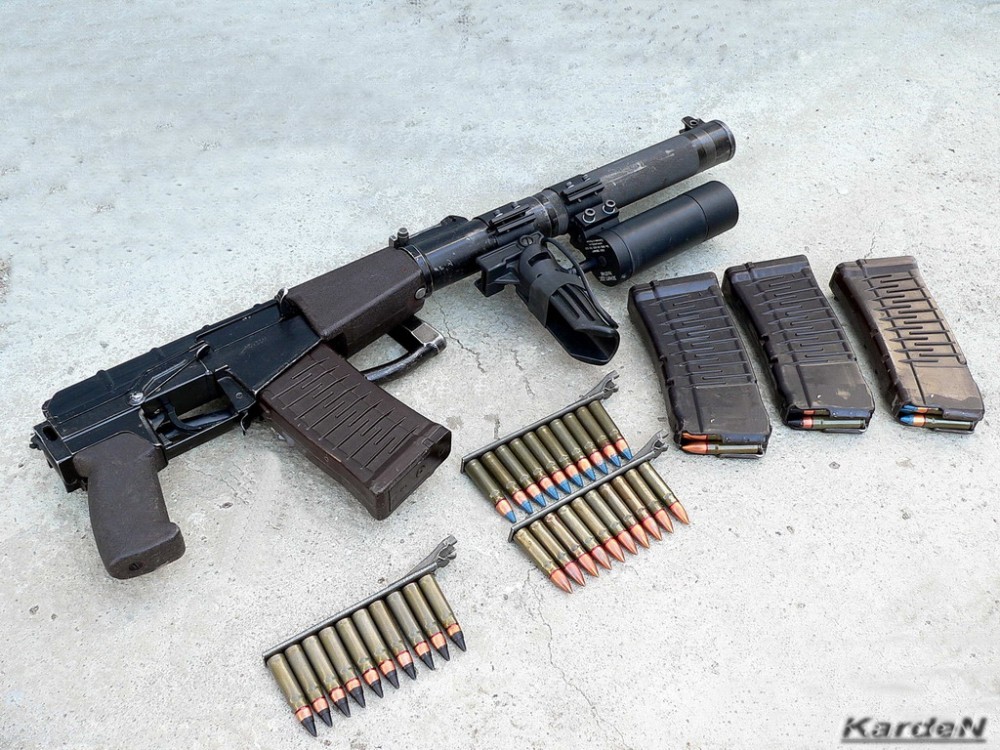 Special Machine (AS) "Shaft" was created in the Central Research Institute of Precise Mechanical Engineering (TSNIITOCHMASH) designers P. Serdyukov and B. Krasnikovym. Adopted In 1987 g. in the army and Interior Ministry special forces. It is designed to engage manpower in the conditions required to maintain quiet and flameless firing at a range of up to 400 m. Machine was created based on a special sniper rifles BCC 9mm "Vintorez". 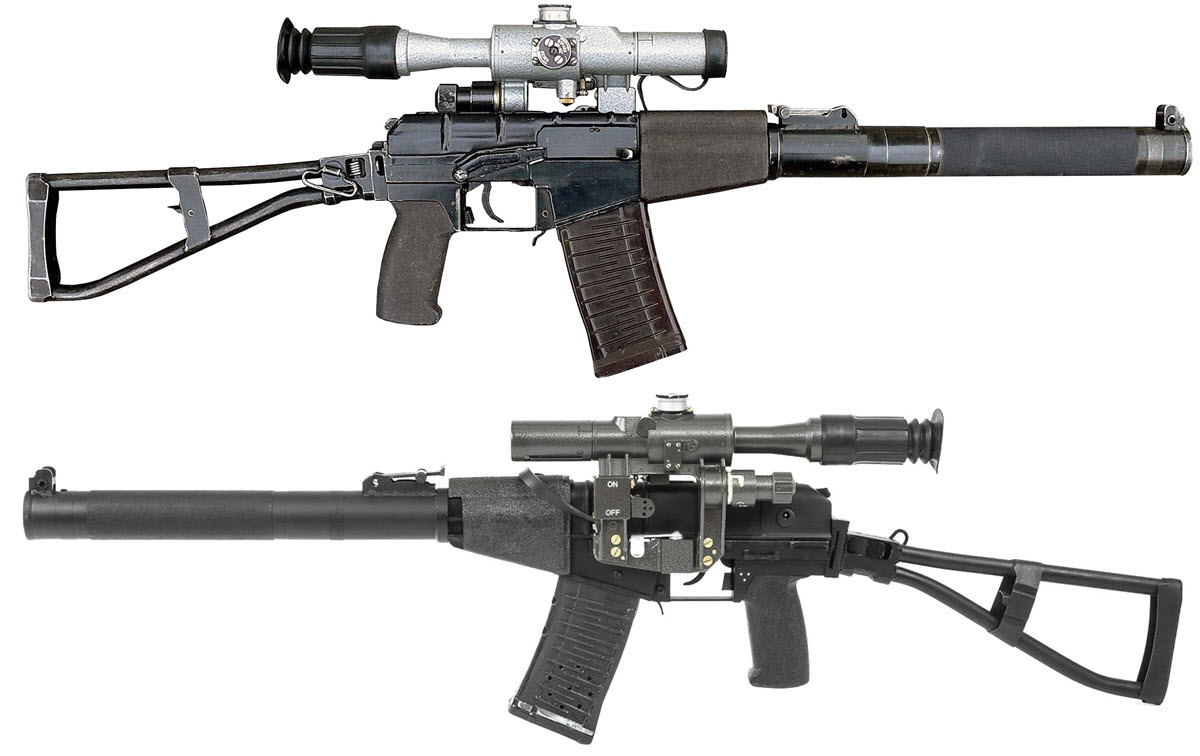 Machine is built on a principle based on gazovootvodnoy automation with long stroke gas piston. The gas piston located above the barrel and is rigidly connected to the slide frame. Locking barrel by turning the bolt, having 6 lugs, for cutouts in the receiver. Receiver is made by milling, of steel. The trigger mechanism allows keeping single and automatic fire. Lever fuse is made of a Kalashnikov type and in the closed position covers the slot for the charging handle weapons. A separate translator fire mode is located inside the trigger guard, behind the trigger, and provides fire either single shots and bursts. 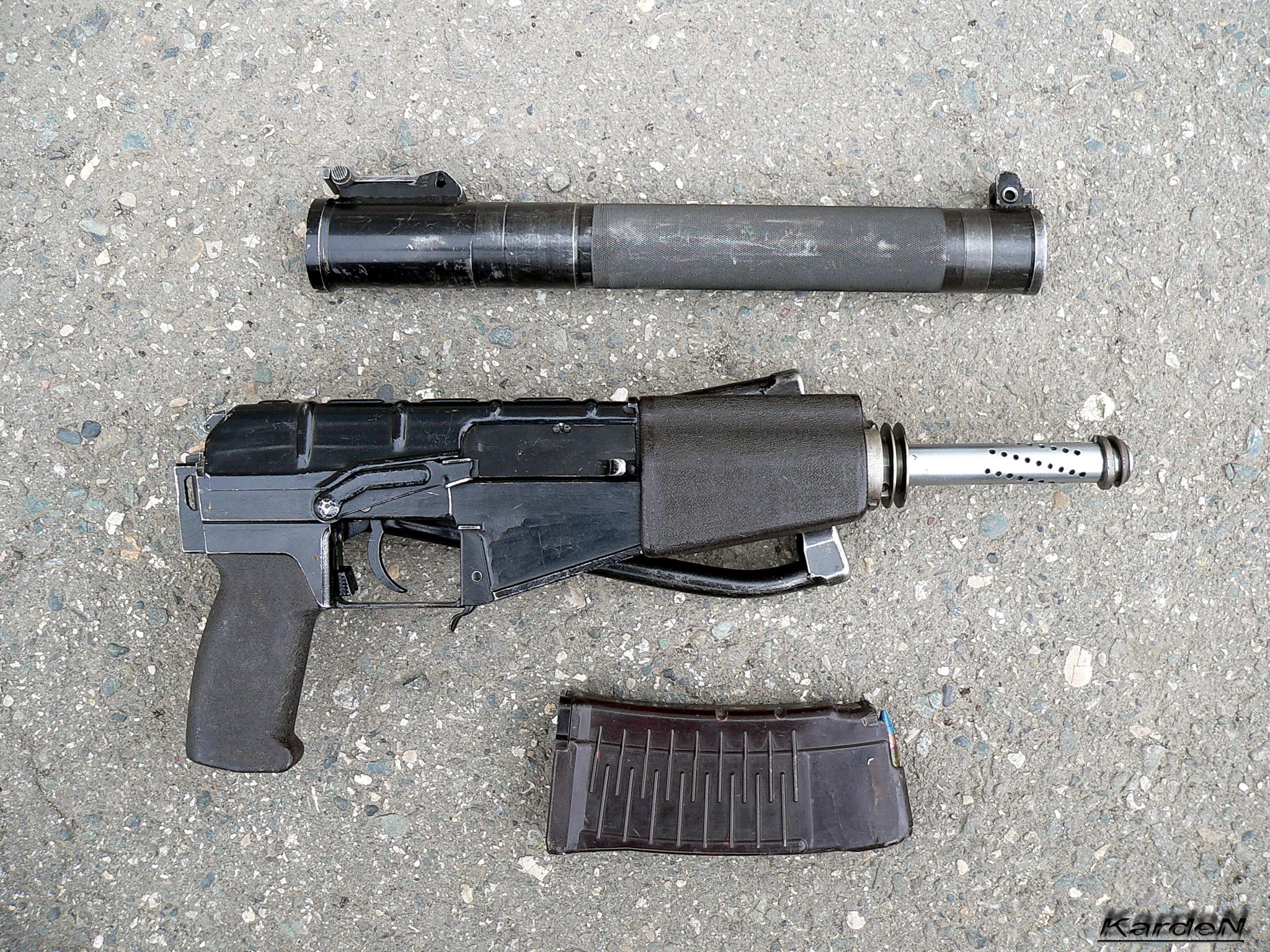 Short barrel AU has in its front portion (after the gas outlet openings) a number of groups of holes, performed by the rifling bottom, and intended for diverting a portion of the propellant gases from the barrel to the back, integral muffler expansion chamber. The muffler is easily separated from the weapon and disassembled for cleaning, but firing a gun with a silencer shot is not allowed.

Integrated with the barrel silencer provides sound suppression, is about 130 dB and flame flash. The silencers are no replacement parts, that ensures its vitality. AC can be easily disassembled into large units: the barrel to the receiver, automation components, trigger mechanism, fore-end, muffler, sighting device, shop and sample. All nodes can stir in a special briefcase, size 450h370h140mm. The assembly is carried out 30-60 seconds. To transfer can also be used Case. Sights include the fly and sector sight, markirovannыy of 25 to 400 m, mounted on the casing of the muffler. Besides, on the left side of the receiver located strap for mounting brackets for optical or night sights. 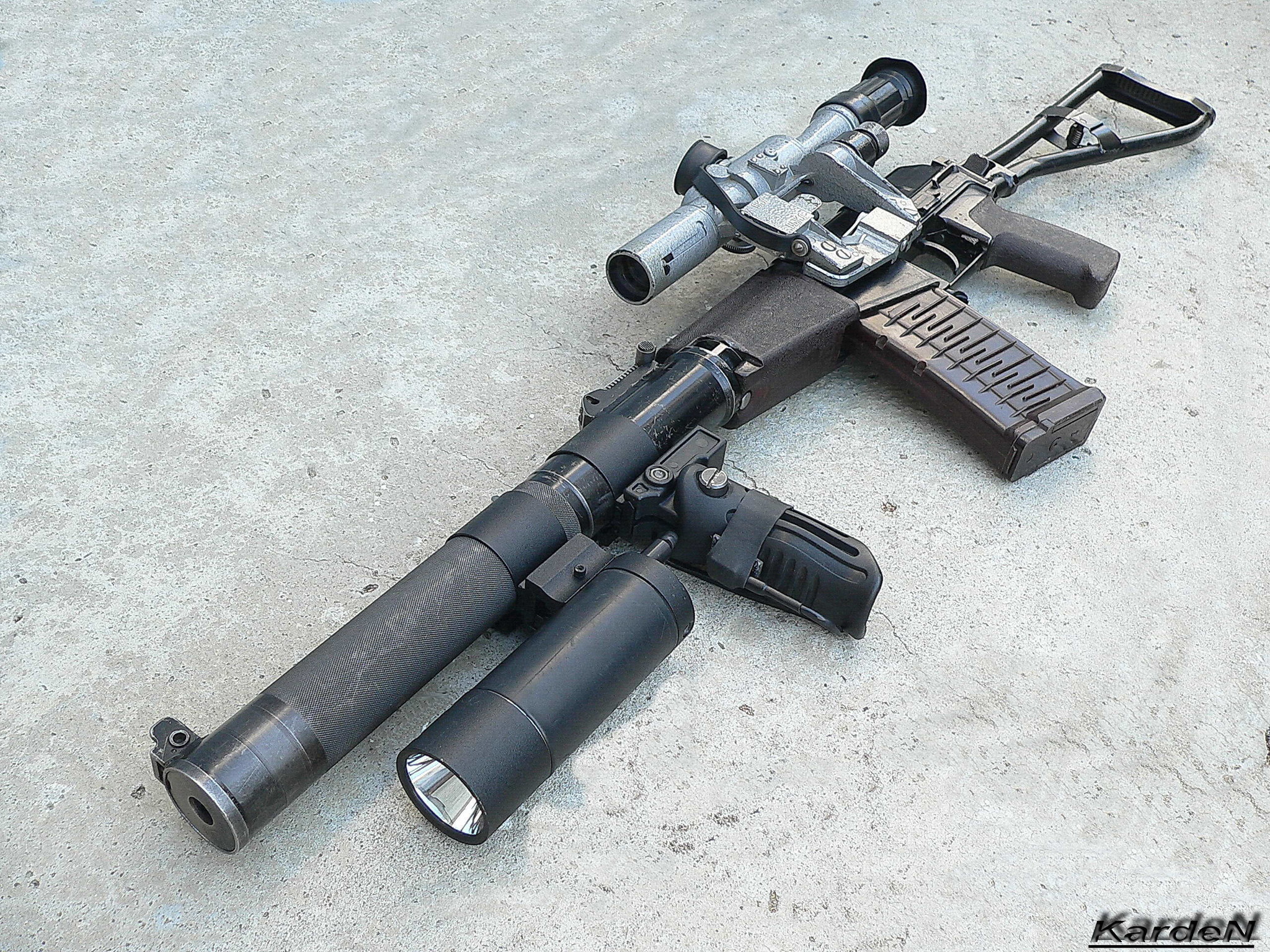 Through the use of powerful ammunition SP-5, SP-6, PAB-9, on distance 100 m bullet pierces the body armor 3rd Class, from 200 meters 6mm steel sheet, and with 500 meters 2mm steel sheet. Armor-piercing bullet cartridge SP-6 is able to disable a car, and even lightly armored combat vehicles. Pistol grip and fore-end machine of plastic, the butt of steel tubes, folding the left side. Established shops have a capacity of 20 rounds and made of black plastic; also allowed to use the 10-round magazine from the rifle BCC "Vintorez". Small shops the length allows the shooter tightly pressed to the ground, for better camouflage. 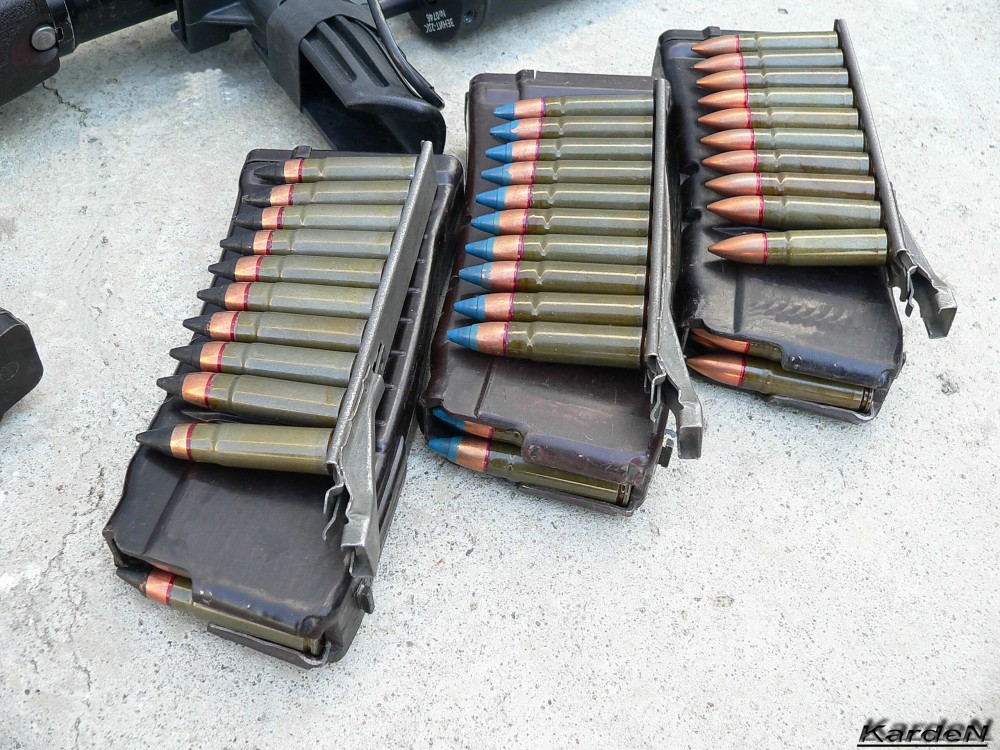 Weapons such as BCC and the AU, It has the expansion type muffler, during shooting are heavily contaminated with coke powder. For cleaning and lubrication, as well as removal of small SCD and AC faults made them partially disassembled. It is carried out without the use of special tools and is the same for both types of weapons for operations, except for the separation and connection of the rifle butt in. The order of partial disassembly of BCC and the AU:

1. Remove the magazine (holding a rifle with his left hand for the handguard, Right embrace Store, squeeze latch and, filed nyzhnyuyu part shop vperёd, separate it from the weapons), remove gun from the guard and, relegating bolt carrier back, check, whether there is no cartridge in the chamber. shutter release, make controlling the descent hammers.

3. Clasping handguard with the left hand, forefinger drown latch housing, right hand to turn the silencer clockwise, and, pulling forward, separate it from the weapons.

4. Depressing the latch screwdriver separator, promotion separator finger to the body and then, pushing his ramrod, separated from the body. Separate the spring separator, having advanced it forward on the trunk.

5. Drown cover lock receiver, pressing a finger on the abutment protrusion return mechanism and, lifting the rear end of the cover, to separate it from the receiver.

6. While holding the rifle, feed forward abutment return mechanism to release it from the groove protrusion receiver; raising stop, remove the mechanism of channel bolt.

7. While holding the rifle, file guide forward until its exit from the slot of the receiver, then extract, hold the hammer.

8. Take the hammer all the way back and, lifting it, separated from the receiver.

9. Lay the gate frame with the shutter back to the stop and upwards to separate them from the receiver.

10. While holding the bolt carrier in a vertical position, raising and simultaneously turning the bolt clockwise, take it out of the bolt.

12. Turn the tube clockwise to align the lip of the box with a slot on the receiver, separate it from the trunk, traveling back.

13. To separate the rifle butt ARIA – drown lock stock and, Promote example back, separate it from the receiver.

weapons assembly in reverse order. Weapon used grease service rifle RJ OST 38.01439-88. It is strictly forbidden to grease cartridges. After cleaning and lubricating the arms, all surfaces should wipe dry. 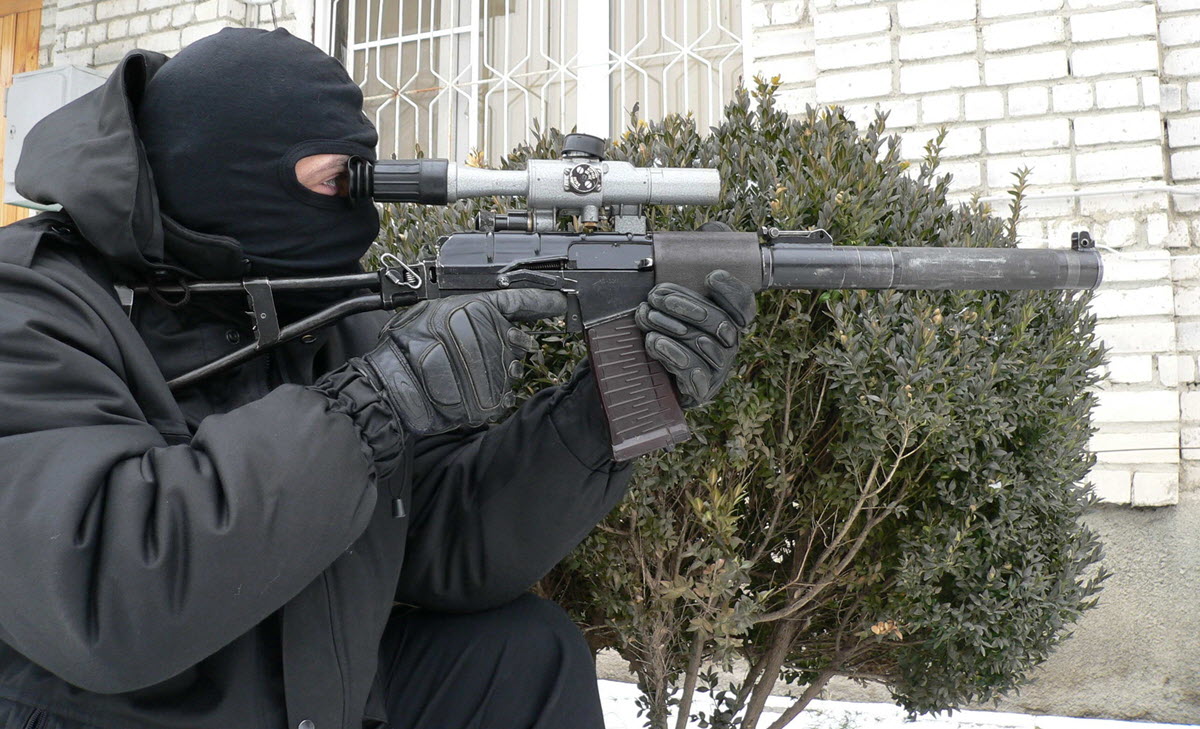