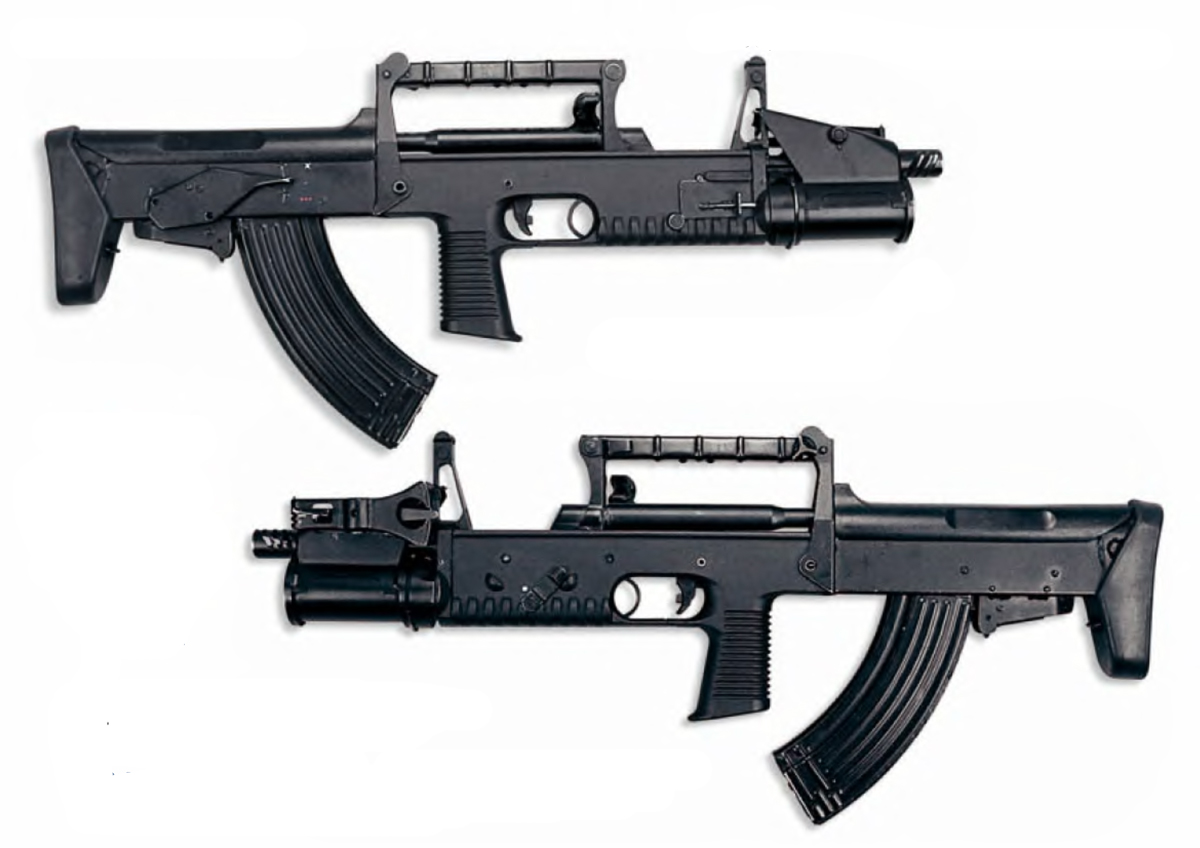 Automaton-grenade launcher A-91M was developed in the Tula Instrument Design Bureau (KBP) under the guidance of the famous weapons designer in. P. Gryazev. A-91M following the development of the complex A-91. This sample was initially assumed for the military special operations army and Interior Ministry of Russia, as well as for export. Weapons created in bullpup configuration, with an integrated design 40mm grenade. The changed repeatedly during the development and configuration of the external appearance of weapons, the most noticeable change was the location of 40 mm grenade launcher GP-95, if the early samples it was located above the barrel weapons, before carrying handle, and front under the barrel was an additional vertical grip for holding weapons, then it moved to a more traditional place in the latest version of the grenade launcher, under the gun barrel, and its housing forms the forend.

The modern version of the machine A-91 chambered 5.56h45mm NATO (export version. 2003 year). 40mm grenade launcher is located under the barrel.

When you create the A-91, developers have decided to get rid of the main problems, associated with the bullpup layout, Release of spent cartridges at the very person shooter when firing from the left shoulder, and shifted to the back of the weapons center of gravity. The second problem was solved, just setting in front of a massive rocket launcher weapon, and to solve the first problem was a scheme designed to remove the liner from the receiver forward, through a special channel, extending along the breech and prints out on the right sleeve, just behind the pistol grip. Part of a similar idea is implemented in the Belgian assault rifle, FN F2000, however, the first time such a scheme has been implemented in the experimental machines Korobov and Afanasyev, created in the USSR in the 1960s. Receiver, not having a window to eject spent cartridges, possible not only to protect the mechanisms of the arms from dirt, but also reduce the gas content in the person shooter district, thereby increasing the comfort of shooting. 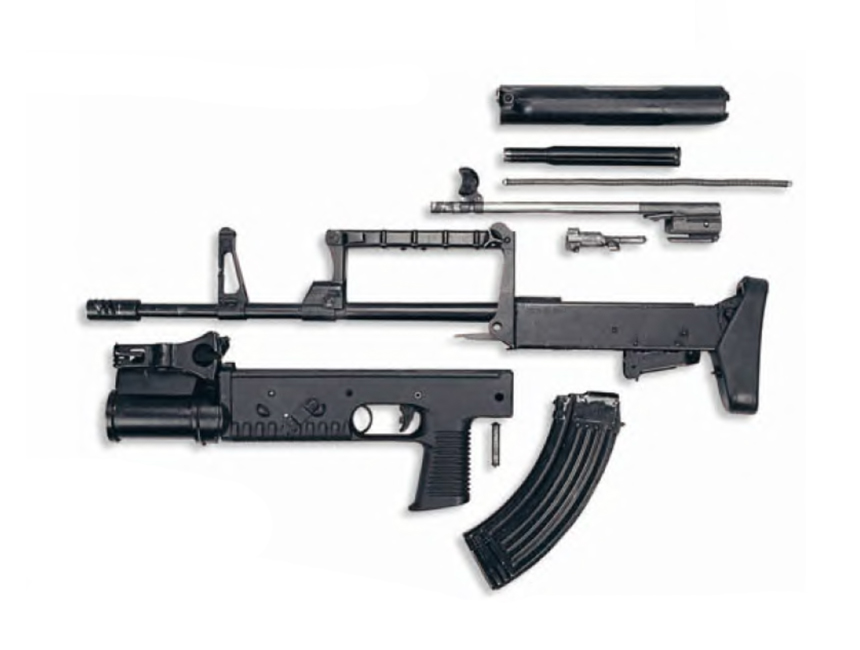 Automatic A-91M is based on traditional automation with the vapor circuit and locking the barrel rotating bolt. Release of spent cartridges carried forward, on the right side arms over the pistol grip, through a special channel, passing along the trunk. The charging handle is located on top, under the handle for carrying weapons, and equally accessible to both hands.

Fire modes - single shots and bursts. Translator fire mode (He also performs the role of a fuse) Located right on the receiver, in its rear part, and an apparatus similar to that Kalashnikov. The machine has two triggers, Front controls integral 40mm grenade, rear, the actual machine. In this case, the rear (automata) the trigger has an optional automatic safety against accidental firing,

type or GSH-Glock 18 pistol. Grenade is an integral component of the machine, It is at the bottom, at an early model A-91, grenade launcher was on top of the barrel.

7.62mm Machine A-91, version of the mid-1990s. The integral 40mm grenade launcher is located above the barrel

Sights include the rear sight, built-in carrying handle, and fly on high ground, mounted on the barrel. In addition, the front of the barrel is placed a folding sight for 40mm grenade launcher. The upper part of the carrying handle is designed as a Picatinny rail type, and it allows you to install it on various types of optical and night sights.

When you create a perspective of automatic weapons in the Russian developers of all time went on ways to improve the accuracy of fire, while in the machine as opposed to a sniper weapon accuracy is not considered to be the sole determining factor, for which should significantly complicate the design and make the machine more expensive, - says Victor K..

The thing is, that combat soldiers dynamics has almost no possibility to aim carefully. the main thing, that the machine was reliable, versatile in any situation, easy to use. These characteristics and features developed by our design bureau Machine 7,62 A-91M. He created the scheme bullpup (translates as bull). The point of this scheme is, that the trigger is located in front of the shop, that allows you to drastically reduce the length of the butt. With a total length 660 mm Machine has full barrel length 415 mm. But the scheme bullpup, as is known, two serious inherent defect, that the world has not yet overcome. 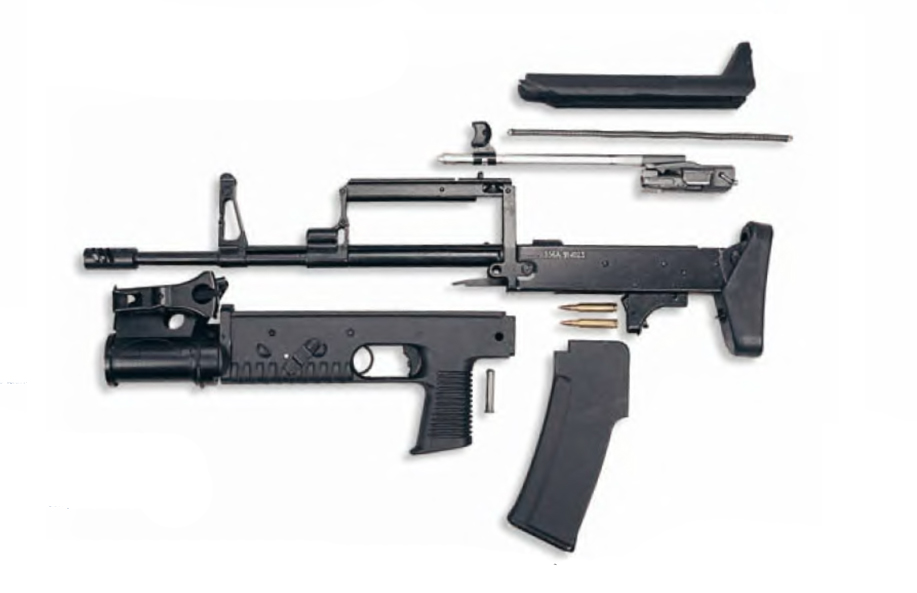 The modern version of the machine A-91 chambered 5.56h45mm NATO (export version. 2003 year). 40mm grenade launcher is located under the barrel.

The first - is the problem of right-handers, southpaw. When shooting left-handed, the shutter moves next to the cheek, and sleeves fly directly in the face. It is very uncomfortable. Therefore, all of the existing scheme bullpup or left-handed, or right-handed. there is, true, and universal, but there is a soldier chooses the machine for themselves. All this complicates the design and increases the cost of weapons.

The second drawback is that, that because of the proximity of the window casings reflection gas affects the eyes and nasal passages, which prevents conduct aimed fire. After the long queues at the soldier watery eyes.

7.62mm Machine A-91, version of the mid-1990s. The integral 40mm grenade launcher is located above the barrel

The machine, these problems have been solved, and resolved effectively, the sleeve is not sent in the normal direction laterally, and forward. This immediately won both the lack of. Now the machine can equally well use and right-hander, and levsha, gases and thus do not affect the arrow, so as they rush forward. Machines under the scheme bullpup create many, but we liner flies forward. This decision pioneer.

The machine has a closed receiver box, that reduces dust and improves the reliability of automation. The system uses a store from a Kalashnikov at 30 rounds.

The advantage of the machine and in the, it is equipped with a built-in grenade launcher. Due to its location above the barrel was achieved a very good balancing. The grenade used by the domestic 40-mm grenades, created specifically for the ordinary grenade launcher and grenade bouncing air undermining warhead. By fragmentation it in 3 times more than a similar shot to the American grenade launcher.

On the machine provides for the use of modern sighting devices, in particular, a single collimator sight, which allows the two to three-fold increase in the efficiency of shooting at targets to move.

Currently, automatic A-91M is advertised PBC as a promising weapon, but in the public data on mass production and procurement of this sample is not. At all, surprised by the lack of any detailed information about this, certainly interesting patterns in open sources, as the Russian, and foreign.

As export version created modification A-91M chambered 5,56h45mm NATO. The main difference lies in the design of the barrel, the rotary shutter and store (with plastic housing), but changed and a number of other parts and assemblies, in particular, gas piston rod, sector sight. Node with a grenade launcher may be replaced by a conventional forearm assembly.