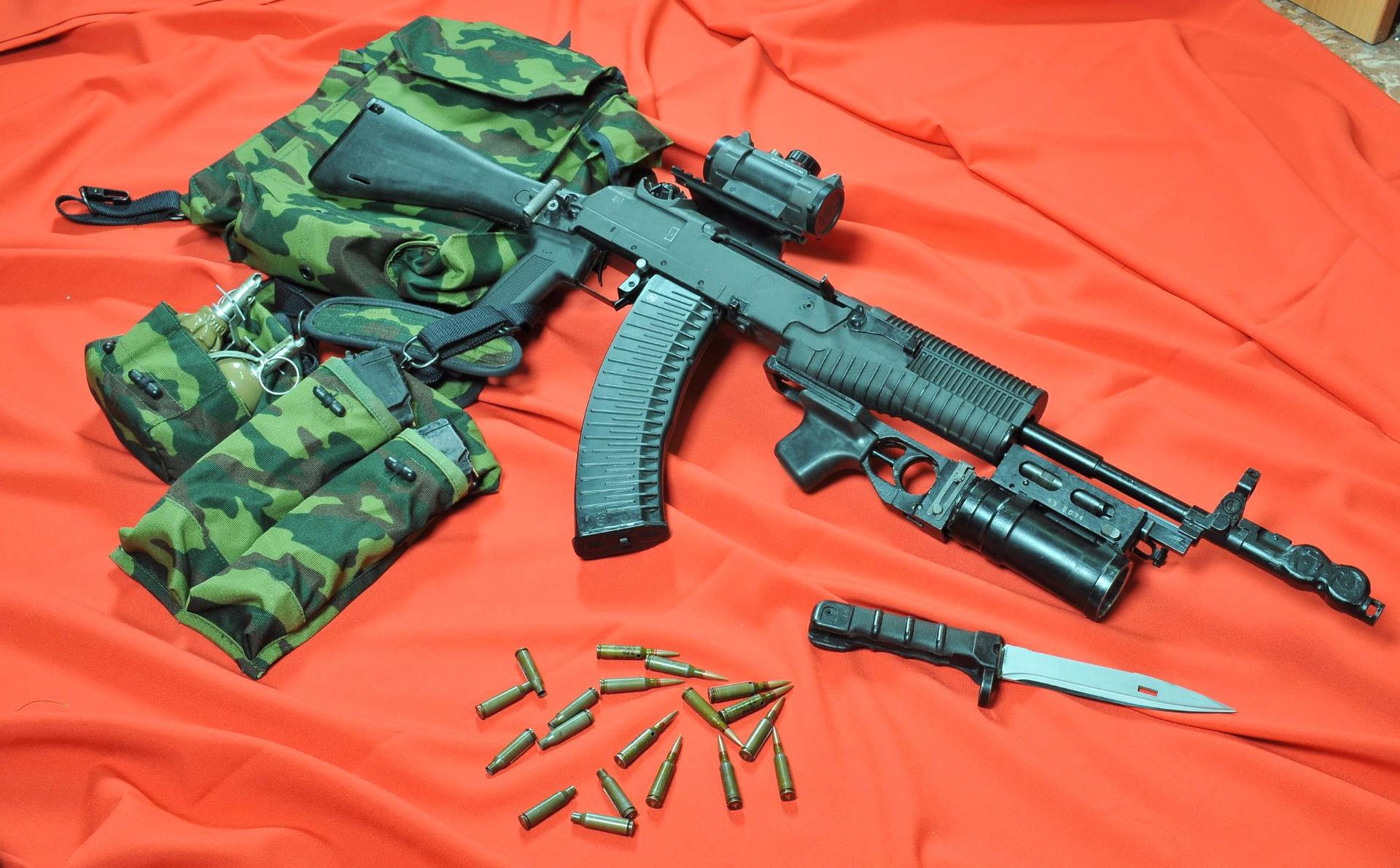 In connection with the adoption of the cartridge arms 5,45-39 mm, at 1981 the USSR Ministry of Defense appointed a contest "Abakan", among design teams in the development of the machine for this cartridge, with characteristics exceeding the firing effectiveness of the AK-74, at 1.5 -2 fold. Competition won the designer Gennady Nikonov. 1986 , the machine has been modified, and 1991 passed state tests in Taman Division. On the Kalashnikov Concern (Izhmash) made with 1998 year in small batches. In automatic armament AN-94 acted in 1997 year and was named the contest "Abakan" .Use special divisions Knight, in scout units ODON. 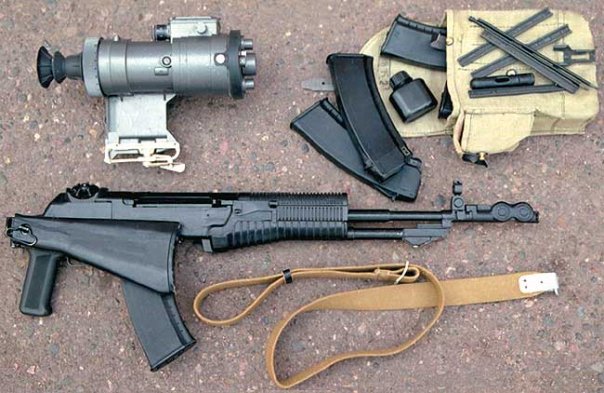 The body is made of steel and impact-resistant plastic (glass-fiber reinforced polyamide). Butt of a machine-gun-type folding right. On machine can be set as day, and night sights. The under-barrel grenade launcher mounted to guide the firing unit. Mount a bayonet-knife is not located below, in AK, and right, that allows the launcher, without removing the bayonet-knife, Besides melee horizontal blade bayonet knife allows it to easily penetrate into the chest, passing between the ribs. The main sight diopter, adjustable. Machine equips regular stores under caliber cartridges 5,45 mm AK-74 (30 rounds), RPK-74 (45 rounds), a new four-row of shops on 60 rounds. At the end of the barrel is a muzzle compensator, configured as an inverted "Eight". Such a shape promotes self-cleaning of the barrel when firing. The possibility of mounting a bipod, PBS, LCU.

The main advantage of the model is to use the principle of offset pulse, that allows the shooter to fire bringing experience return, after 2 a bullet flew out of the barrel.

Automation works by combining the principle of free recoil firing unit driven by a gas engine bolt. Under the barrel is a guide lever, supports the barrel when it rolled back on the principle of artillery. Inside the bed of metal guide moves the firing unit, consisting of a barrel, connected to the receiver. Inside the receiver are arranged with a short gate frame and shutter trigger. The trigger mechanism is integrated with the pistol grip and, if necessary easily detached from the common operating mechanism. The trigger mechanism allows keeping the three modes of fire: single, for two cartridges and automatic fire. 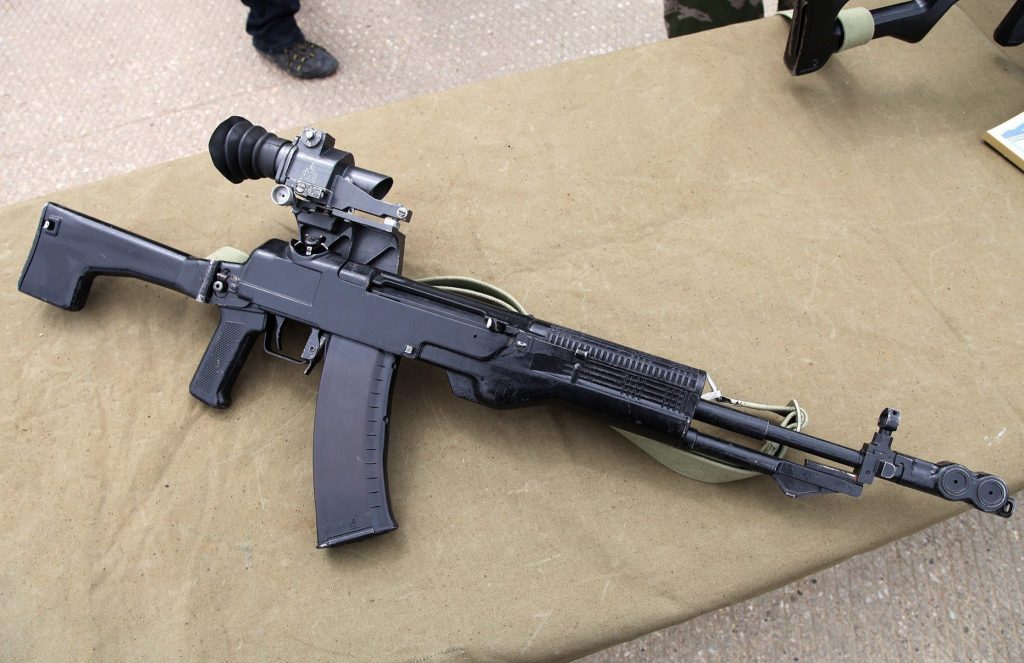 In short burst mode for automatic fire two shots gives a fast pace 1800 rounds per minute. Considering, that when the shooting unit rolls back, then during automatic rollback time to do two cycles at a high pace, and only after, both the bullet left the barrel, It reaches its rearmost point, It strikes the buffer and the shooter feels summed recoil momentum first shots. When firing bursts of gun alone moves at a normal pace 600 rounds per minute. This cycle is repeated every time when the next time the shutter. The barrel bore when fired locked by turning the sliding bolt.

When firing the shutter does not "overrun" for the shop, as it happens in all kinds of automatic weapons. machine design allows for the supply of ammunition in two stages - a preliminary extraction of the frame store at reversing and ramming into the chamber during its runup forward. The length of the frame to move the gate slightly longer than the used cartridge. Inside the casing there absorber and buffer, which effectively quenched shot firing unit is rolled back on the back wall of the box and define additional accelerating pulse for its return to the starting position.

AN-94 machine on a lot more complicated than the AK-74 and its repair in the field is very time-consuming, eg for the development of a complete disassembly and repair of the AK-74 war need 10 hours, Abakan and for a few weeks. Muzzle compensator fulfills its role, but clean it is not particularly comfortable. Diopter rear sight difficult shooting in low light, Besides, it easily becomes clogged.

Partial disassembly for cleaning is done, lubrication and inspection machine. To disassemble the machine must be:

1. Remove the magazine, pressing the thumb latch on.

2. Remove gun with a fuse, check, whether there is no cartridge in the chamber, for what twice withdraw the bolt carrier back, inspect after the second charging chamber, release lever bolt, make controlling the descent hammers. Dual retraction of the bolt due to ramming feature of the system cartridge from the magazine into the chamber through the intermediate feeder. Esslin patron doslan in chuck, the next cartridge is not in the store, and lies on the feeder. After separating the store and abduction bolt back the cartridge from the chamber will be reflected outside of the receiver, and a cartridge with a feeder, in this way, It will runaway into the chamber and is extracted from there only during the second abduction bolt.

3. Separate optical or night sight if any. To do this, turn the clamping lever in the direction of the eye cup and remove the sight backwards movement.

4. Extract from a case with accessory socket butt. Remove the cover from the foam and remove it from rubbing, ruff, a screwdriver and a drift.

5. Using a punch to remove the base of the groove butt ramrod, then remove the ramrod. Butts thus should be locked in the stowed (folded) position. For folding butt must thumb drown spring loaded latch and turn the butt around the axis until it engages a latch ledge on the right wall of the housing. Reclining butt to press on the head of a spring-loaded latch on the top window butt pad and turning the butt around the axle to lock.

6. Separate the housing cover. To do this, remove the latch casing cover with lock, turn it down, necessary to limit the, and to separate the forward movement of cover. Allowed unlatch latch lid using a cartridge, punch, ramrod or via Hitch, separated from the machine the muzzle brake, introduced into the tubular cavity cover latches (using a muzzle brake is necessary to wait for its cooling after firing).

7. Separate the firing unit. Set translator fire to the "AB" ("Automatic fire"), and the fuse - in the "O", move the unit forward until it stops and the upward-forward to remove the firing unit. The shoot undismantled unit not allowed cocking bolt in order to avoid samorazborki (sharp separation) a pusher with spring.

10. Extract the bolt carrier to the gate of the receiver, before this pulling out of the hole with a groove bolt rope tip, separate the gate from the frame.

11. Extract stripper with a rope and the spring of the receiver. For this, somewhat depressing the fingers of the left hand by a spring-loaded sear receiver, the right thumb to press the rear end of the ejector and pull it out of the receiver, remove the spring from the core pusher.

13. Separate the trigger from the housing. To do this, drown lug lock stock and turn the pin anticlockwise by 90º. Before separating the stock to be installed in martial (reclined position).

allowed change the order of partial disassembly, since its separation from the trigger mechanism from the housing. In this case, the translator must be set to "AB", and the fuse - in the "O". 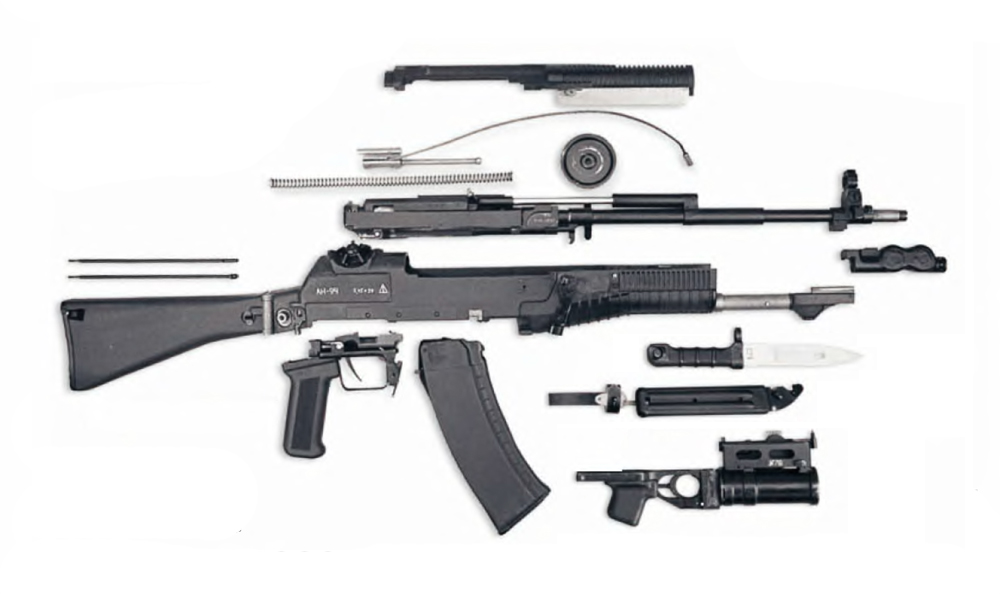 The order of assembly of the machine after its partial disassembly:

1. Connect the trigger to the housing. For this purpose, the trigger housing front hook embedded in the casing and jumper workpits, turning the body to the side window casing, enter it in the box all the way. Clutching with one hand on the handle trigger to the housing, turn the thumb of the hand trigger pin clockwise, while sinking the thumb of the other hand the stock retainer. Tighten the pin over the recessed locking butt up to the stop and release the latch. When resetting checks sleeve enters the cutout Radius rear protrusion of the trigger housing and secure it in the housing, and returned to its original position lock Butt lock the pin.

2. Attach the muzzle brake to the shooter unit, for what, holding brake lock down, Push it to the muzzle of the barrel until it stops, and turn it clockwise (if you look at the machine from the muzzle) restrictions. Make sure to fix the brake latch.

3. Insert ejector and with a rope with a pre-dressed on the rod by a spring into the receiver. To do this, place the receiver box upside down, enter in its opening spring, then, squeezing her pusher, cable set up and, while pressing on the box spring loaded sear, invest ejector into the groove of the receiver, and then release the sear.

4. Insert the bolt carrier with the bolt into the receiver. For this move forward to lock the bolt in the slide frame in a position to enclose the gate frame in the recesses of the receiver, located slightly ahead of lugs projecting from the box sear. Promotion bolt carrier forward, monitoring the occurrence of the frame rod to the gas chamber.

5. Enter the cable with the tip into the hole with the slot bolt, paying attention to the correct administration of. To do this, set the butt end of a cable tip, from which the rope, front of the hole in the frame, and exiting from the end of the cable to enter the initial portion into the groove. The cable is then advanced into a tip bore with a groove all the way forward.

allowed change the order of the assembly after partial disassembly, finishing assembly attaching a trigger to the housing. In this case, the translator must be set to "AB", and the fuse - in the "O". Check correct assembly after partial disassembly: fully assembled machine while pressing the trigger, firing unit should hand discharged without jamming limit to the rear wall of the casing and then, under the influence of damper spring, vigorously to return to its original position.