Able to survive the mortar attack 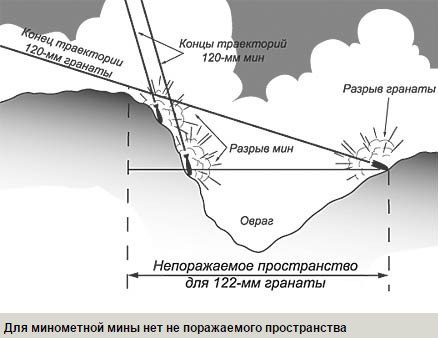 The maneuverability of these weapons allows you to quickly and discreetly to run for the position, during 30 sec. — 1 min. get ready to fire. And after the fire quickly disassemble and mortar off position.

Agility allows you to effectively use the mortar in any conditions, including when the fighting in the city.

In consequence of rate of mortar, mortar attack different intensity. The average rate of the mortar 15 — 20 rounds per minute.

If the firing is performed several calculations it can have devastating consequences.

Not aimed mortar attack on the areas being packages from 60 to 80 shots. Or short series of 6 — 8 shots repeatedly a few minutes in the expectation, that the enemy will leave the shelter.

Bombardment may begin with a single, prystrelochnoy, mines ( it may be a smoke or incendiary ). Then, after amending the aim, conducted intensive fire at the destruction.

Mortar attack carried out by mounted trajectory and is capable of hitting targets behind obstacles, in the trenches, on the reverse slopes of heights, ravines.

Killability min at shelling.
Effective firing range during a mortar attack from 82 mm mortar is 85 — 4000 m.

The radius of continuous defeat ( when it affected at least 70% goals ) is 30 m. The defeat of the underlying objectives - to 18 m.

Mina forms of 400 to 600 fragments. Shards of light and easily ricochet from obstacles, acquiring an unpredictable trajectory.

Poor penetrate obstacles. From these fragments can hide behind walls, fallen trees, parapet of the trench, sandbags. Bulletproof vest and helmet can protect against lung fragments.

Usually, mine explodes on impact with the ground is not burying it. Therefore, fragments fly upwards and outwards, increasing its injurious. funnel insignificant.

Less often, when submerged mines in the ground, funnel depth is formed from 50 to 60 cm and a diameter of about 1 m.

Such munitions have a radius up to continuous defeat 60 m. The radius of destruction lying purposes to 25 m.

Survival in a mortar attack.
In order to survive under mortar attack must take into account the peculiarities of this weapon.

Mortar shell is flying through the curtain trajectory and has a subsonic speed. Therefore, its mission to break the sound heard.

If the audio tone increases, then mine is approaching. When the mine is removed - tone decreases.

It is therefore very important to immediately develop skills to identify the direction of flight minutes at shelling. A, also, Skill to listen to the surroundings.

Due to rupture of the earth's surface mines should take into account the horizontal dispersion of the fragments and their ability to easily ricochet.

At the first mortar attack breaks or at the sound of approaching mines need to immediately fall to the ground, tightly pressed to her, and protect your head and neck with your hands. Mouth should be kept open, to avoid damage to the eardrums at similar explosions.

When the shelling can not get up. To move to a more suitable shelter only in the breaks between the series of explosions and just barely crawling tightly hugging the ground.

It is in places where possible mortar attack is very useful in the field of permanent shelter to schedule suitable for protection.

Not too much to train yourself to care for shelter. Though, would be mentally. But it is better - in practice.

Remember, that the helmet or body armor, even a low degree of protection can protect you from lung injury by shrapnel. You can not shoot them in the places where the mortar attack possible.

When the shelling is dangerous to take refuge in the gardens, rare forest plantations. mine, when hitting the branch may explode in the air. This will increase its killing power.

Do not panic and do not try to escape. Shards quickly catch up with the running man than lying. The only correct - lie, clinging to the earth. The lower you are lying - the better.

The position can be changed after waiting 5 — 10 minutes after breaks.

Medical assistance to the wounded, you can have after a mortar attack. Otherwise, it will have to provide you with.

If you come under mortar attack while on armored vehicles need to get out of the fire zone as quickly as possible, while under armor protection.

Well, at every opportunity, you need to build a safe shelter to a mortar attack does not overtake you defenseless. Cell, trench in the form of a broken line, the only reliable shelter, that with the least losses will make it possible to survive the bombardment