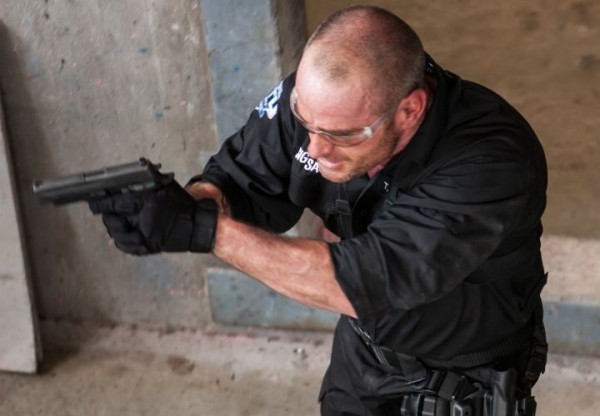 Some elements of the techniques and tactics of shooting.

Move on to the development of additional techniques only makes sense after, you would bring to perfection and automatism the basic elements of shooting technique. Extremely useful in case of injury, sverhblizkoy action at a distance or in difficult conditions may be shooting skills on the one hand. The grip is made of weapons as well as in the basic version, but without the supporting arm. It should strive to pull the thumb vertically (as it allows the weapon design), keep it close to the surface of the arms, but in no case do not push them into. To hold the weapons are used only the three lower fingers. When properly grip weapons must be located in one plane with the forearm and be like an extension of your hand. If necessary, instinctive firing one-handed grip when using the simplified technique Farbiana, it uses the same principle guided weapons with the help of the whole body movement, the same initial stand :

After turning on the target and take the correct stand you pull the arm with the weapon on a diagonal against the body, wherein the weapon is in the longitudinal plane of the body and is directed downward – to the left (using the right hand). Movement of the wrist you send arms straight down (this will help you own weapon weight) and fix this position tension arm muscles.

Further rotation of the arm in the shoulder joint raise your hand up (wherein the gun is moved in the longitudinal plane) and the shot at the moment, when the gun is on the line between your eyes and the target.

Withdraw the bolt back to the loading arms and the grip can achieve acceptable pillar by engaging the upper edge of the waist belt or the outer surface of femur (though in the latter case, you can spoil your clothes or get a serious bruise on the skin). General principles are: Avoid relax muscles of the hand, guided weapons on a target without moving the whole body, Do not aim the gun on top of the movement – down.

There are techniques to eliminate delays and reloading weapons under the action of only one hand, however, they require a virtuoso performance and can not be recommended by an arrow mid-level training.

Handed hold weapons used in shooting “from the hip” sverhblizkoy at a distance, while the elbow is pulled back. Gun barrel is slightly above the pelvis close to the body of the arrow in order to avoid the possibility of capturing the enemy weapons. arrow body at the same time turns slightly to the right, instinctive aiming (“pointing” weapons on target) made wrist movement. From the outset to practice all the techniques of one-handed shooting when using the right or left hand. By methods advantageously applies one-handed firing notorious “pendulum”.

This movement system under fire, based on a certain inertia shot process. A soldier changes the speed and direction of movement before, than the enemy has time to squeeze the trigger. In simplified form, technique “the pendulum swing” as follows:

Further tightens the right foot, turn to the opponent right side. Feet shoulder width apart parallel to one another, you are in a stable static position. Perform shot using sighting devices.

Produce similar feinted to the left, and the process is repeated – right throw, polupritselny “knocking” shot, a solid position half-turned to the enemy, with careful aiming shot, feint right, etc.. In this case, you are moving forward in a zigzag. You will succeed only if you perform this technique at a very fast pace (that reached its preliminary working off to full automaticity) and “Ryan” rhythm, avoiding repetitive movements.

To exit from under fire, you can apply and rolls in a variety of ways. When the rift is changing dramatically the level and direction of motion of the body, making it difficult enemy firing. The roll consists of rack, or more frequently out of position “knee”. In the shallows, jumping, downs, etc.. P. it is important to give the arms a position, which eliminates the possibility of destruction of a fighter with a random shot. Usually the gun pressed against the right side of the barrel head straight up. Less recommended position, when the gun is pressed to the left collarbone with the direction of the left trunk – up at an angle 45 degrees. Needless to remind you to remove your finger from the trigger guard. The easiest way to perform a roll to the left, You fall to the base of the palm of the left hand (fingers should be directed to the right – ago) and rolls to the left through the forearm, elbow, left shoulder, back. Do not forget to press the chin to the chest, otherwise you can hit hard nape. Further, using the kinetic energy of motion, you go out into position “knee” or rack. You can use this method when necessary to eliminate the delay in firing under fire.

It is often necessary to run with a loaded gun in his hand. At the same time you hold the gun with his right hand in the position “from the hip”, the index finger outside the trigger guard. His left hand is superimposed on top of the weapon, thumb to himself. Four fingers of the left hand is closed trigger guard right, the first phalanx of the thumb is between the hammer and the rear part of the firing pin. Left elbow looks ahead, the body slightly turned to the right.

Thus, to move quickly in the crowd, and so convenient enough. P. It is recommended to close the gun lock when you change position. When running with a weapon it is important to be able to quickly “brake” and take a fighting stance. For a quick stop you produce soles slip punches down the ground left – right – left, and at the same time goes down the center of your body weight. In this case, in any case does not bounce, You should like “spreading” on the ground. If any movement, change of position, etc.. Avoid moving backwards, especially with regard to the adoption of provisions “knee” and the rack return.

The most important skill is the ability to correctly estimate the distance to the enemy and firing respectively views. For the average shooter can recommend the following scale:

Distance from physical contact with an opponent to 1,5 m it is advisable to shoot “from the hip”. from 1,5 m to 15 use m “instinctive” shooting.

Do not try to shoot in combat with a pistol on a distance of over 25 m, better to quickly close the distance (cm. higher) and then open fire. On any modern target, used for training in combat shooting zone marked, entering within which provides the opponent failure. It is necessary to develop the skill of defeat “the center of mass” – score, located just above the solar plexus of the opponent. on sverhblizkih “contact” distances and the application of personal protective equipment recommended by the adversary affected area – rectangle, formed respectively eyebrows, the lower lip and the outer corner of the eye of the enemy. If you are dealing with a single enemy, continued to fire until, as he moves. Then replace the store to complete and return the weapon to the enemy. This is similar to the elimination of”third delay”. The difference is, that if a few rounds left in the store, you put it in Poucher (the so-called “tactical reload”).

As noted, optimally at “instinctive” shooting fire “bursts” by two shots with the observation of the goal, and the adjustment of pickup in between bursts. In the West, is also widespread TN. “Mozambican trio”. This technique is the result of a wide spread of personal protective equipment and provides two quick “confounding” shot, aimed at the center of mass, followed by a sighting shot in the head. These techniques do not apply in the event of a collision with several enemies simultaneously. In this case, you make a single shot in the first of the opponents (of course “first” should be the, Who is the greatest danger for you at the moment), carry fire and to produce a second one shot, etc.. In the last of the enemies you make ordinary “queue” from two shots back, producing one shot in each of his opponents, from the first to the penultimate. This is the standard workflow, which must be carefully worked out in advance.

Nor can we ignore some features of the use of weapons in the room. One of the most important skills is the ability to properly overcome angle (corridor turn, a doorway, etc.). A standard principle “three eyes” – your mind and arms constantly directed to the same point, weapon directed movement of the whole body. In this case, you're in the main rack close to the outer wall and parallel to it. Weapons is located near the corner, but in any case not in favor of it. Next you will gradually increase the angle between the wall and the body's longitudinal plane (arms) as if turning around a notional axis, passing through the arms. In this case, you will gradually obsleduete space around the corner, in constant readiness to open fire. A similar technique is used to overcome the door opening by two persons. Fighter, occupying a position near the right jamb of the doorway, examines the left half of the room, located on the left jamb – right part, with the barrel of the gun as if cross – hence the name of the reception “crossing trunks”. If the approach to the doorway is only possible on the one hand – One of the men takes a position at the opposite door jamb using a rapid spurt across the doorway – the opponent does not have time to squeeze the trigger. Useful skill firing from behind cover. What is understood under cover – a local object or structure, providing protection from needle destruction by fire of small arms. Shelter mainly divided into “vertical” (fire is the right or left of the shelter) and “horizontal” (fire is on top of the shelter). Consider the firing to the right of shelter. Take basic stance, arms around his chest. Important, that your right foot is exactly on the line, passing through the right edge of the cover, feet parallel to each other. Now, without changing the position of feet, Bend the right leg at the knee. You straighten your elbows and open fire. The opponent sees only weapon, right shoulder and half of your face, Return for shelter in reverse order. Consistently return the gun to his chest and straighten your right leg at the knee. Shooting over “horizontal” Shelter is usually made out of position “knee” or of the basic rack. general provision: when firing from behind cover arms, shall act on the 5 – 10 see the shelter line. For smaller values ​​increase the risk of self-defeating ricochet bullets from hiding, at large – risk of capture of enemy weapons – for shelter. Touch weapons of various local subjects should be avoided in all cases. This leads to significant deviations bullets and often delays the gun mechanisms. If necessary, to stop firing is necessary to rely elbows or wrists. Weapons should be on weight.

It should be noted, what all, in this book – no more than the initial foundations of the art of combat pistol shooting. For sure possession of the most difficult varieties of small arms needed years of training. The initial stage may be passing the course under the supervision of a specialist in combat shooting, it is impossible to replace the study of literature and independent exercise