How to remove the bullet. Types of gunshot wounds 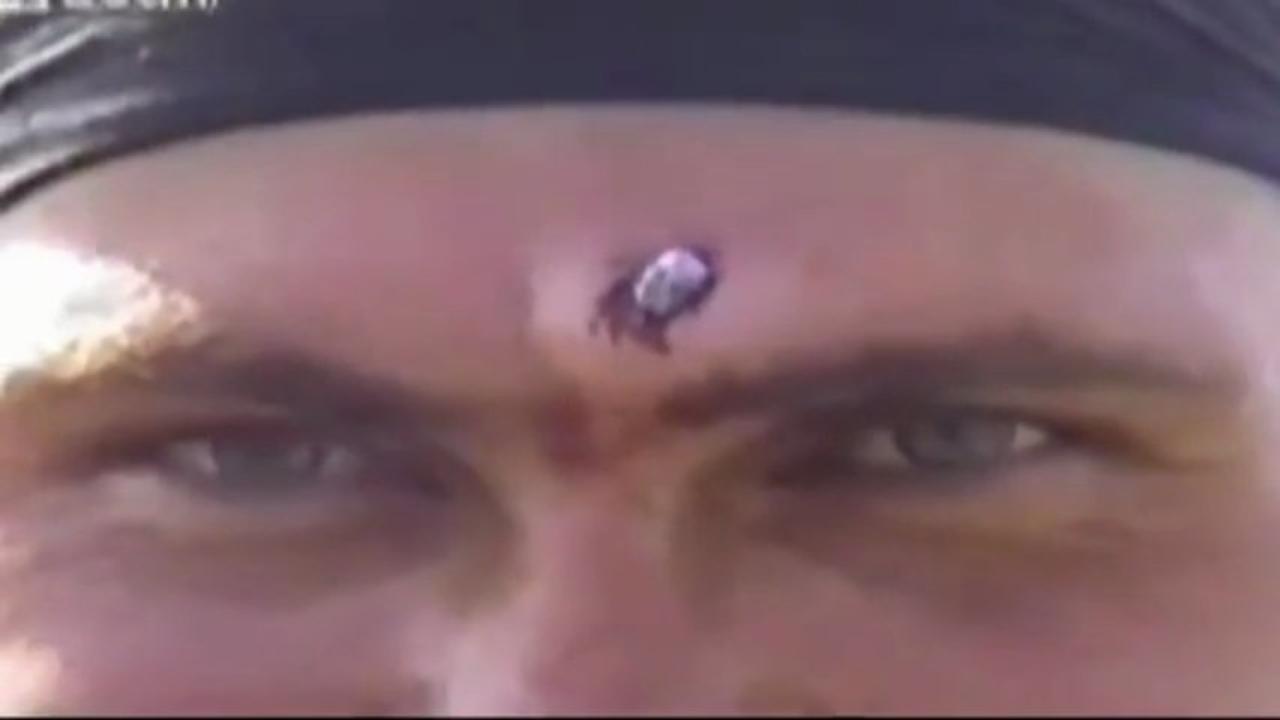 * Right to evaluate the nature and severity of injury.
* Knowing the nature of the injury, to make the correct action in first aid.

Bullet, penetrating into the body, causing damage to the latter. These lesions have certain differences from other body damage, which should be considered when administering first aid.
At first, usually deep wounds, and wounding the subject often remains inside the body.
Secondly, the wound is often contaminated with fragments of tissues, shells and fragments of bones.
These features of a gunshot wound to consider when first-aid.

The severity of the injury was assessed as follows by:

* location and type of inlet, the behavior of the victim and other features.

wounds of the extremities

first, on what to look for when providing first aid for wounds of the extremities - the presence of bleeding. With the destruction of the hip or shoulder arteries die of blood loss can occur within seconds. So, when shot in the arm (and damage to the arteries), death from blood loss can occur within 90 seconds, and loss of consciousness during 15 seconds. The color of blood define venous or arterial bleeding. Venous blood is dark, and arterial - scarlet and distracting from the wounds intensively (fountain of blood from the wound). Bleeding stops pressure bandage, harness or tamponade wounds. When venous tourniquet below wound stops bleeding, and blood - above the wound. Impose a tourniquet, than two hours is not recommended. This time should be sufficient to deliver the victim to a medical facility. When venous bleeding desirable to impose a pressure bandage, and do not burn. Compressive bandage is applied to the wound. Tamponade wounds for wounds limbs rarely done. For tamponade can be wound with a long, narrow subject tightly fill the wound with a sterile bandage. The higher the wounded artery, the faster the blood loss. limb arteries are projected onto the inner side of the thigh and the shoulder (these areas, where the skin is more difficult to tan).
As a result of abundant hemorrhage develops hemorrhagic shock. The pain can be so severe, that cause painful shock. 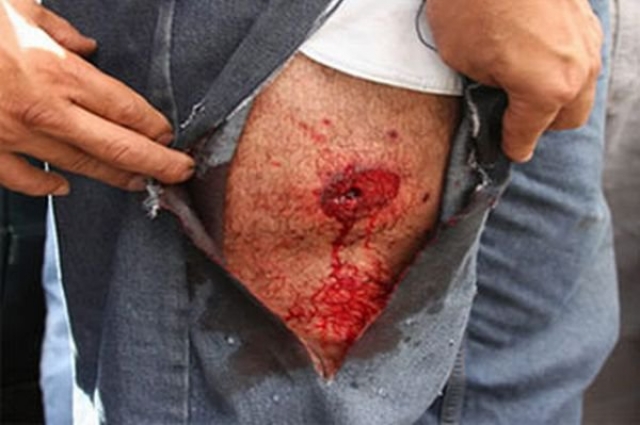 1. Immediate stop bleeding.
2. Giving the victim of such a posture, in which the limb will be slightly raised.
3. Immediate replenishing the lack of blood-substituting solutions Blood.
4. anti-shock means, painkillers.
5. Providing warmth.
6. Ambulance.

second, Things to do - possible fractures. When it is necessary to immobilize the limb fractures. It is better not to try to move the limbs in general, tk. Broken bones have sharp edges, which can damage the blood vessels, ligaments and muscles. The wound should be covered with a sterile bandage. Ability to self-transportation of the victim.

It does not always cause immediate death. About 15% wounded survive. Wounds to the face are generally accompanied by an abundance of blood due to a large Number receptacles located in front of the skull. When wound head should involve concussion. The victim may lose consciousness due Rausch and make no sign, but the brain can not suffer. If there is a gunshot wound to the head, the victim is laid horizontally, ensure peace. head wound (excluding persons injured) better not touch (cover with a sterile cloth), and immediately call an ambulance. When you stop breathing and heart artificial respiration and heart massage. Facial wounds with abundant release of blood: stifle the wound with sterile gauze. Self transportation is not recommended or performed with all the precautions.

When spinal injuries can be observed brief loss of consciousness. The victim is immobilized (placed). When bleeding bandage. In wounds of the head and spine, First aid is limited to the immobilization of the victim and stop possible bleeding. When you stop breathing and heart made chest compressions and artificial respiration. Self ransportrovka - not recommended.

The wound may be complicated by damage to the larynx and spine injuries, as well as the carotid arteries. In the first case, the victim is immobilized, and the second immediately produce hemostasis. Death from blood loss during injury of the carotid artery may occur within 10-12 seconds. Occluded artery fingers, and the wound immediately tamponiruyut tight sterile bandage. gentle transportation.

Gunshot wounds to the chest and abdomen

All organs are located in the human body is divided into three sections: pleural cavity, the abdomen and pelvic organs. Agencies located in the pleural cavity are separated from the bodies located in the abdominal cavity of the diaphragm, and abdominal organs are separated from the pelvic peritoneum. When wound of the internal organs, blood is not always pours out, and collects in these cavities. Therefore it is not always easy to judge whether the hurt large arteries and veins in these wounds. Hemostasis is difficult. Injured organs pleural cavity may be complicated internal bleeding, pneumothorax, gyemotoraksom Ili pnyevmogyemotoraksom.

To prevent ingress of air into the pleural cavity must be imposed on the airtight wound bandage - gauze smeared with ointment or boric vaseline, polyethylene piece, in extreme cases - to clamp tightly wound palm. Victim seated in a semi-sitting position. Hemostasis is difficult. Transportation - sparing.

When there is a wound in the heart assumed the worst. external signs help identify cardiac injury such, how fast (instantaneous) victim deterioration, sallow complexion, rapid loss of consciousness. It should be noted, death as a result of acute heart failure(in cardiac injury) there is not always. Sometimes there is a gradual extinction of the organism as a result of filling with blood and pericardial, as a consequence - the difficulty of the heart. Assistance in such cases should be given specialist (drenirovanie pericardium, suturing wounds of the heart), which should be called immediately.
Pericardium - a cavity, in which the heart is. In wounds of the heart into the cavity can have blood and squeeze the heart, preventing its normal operation 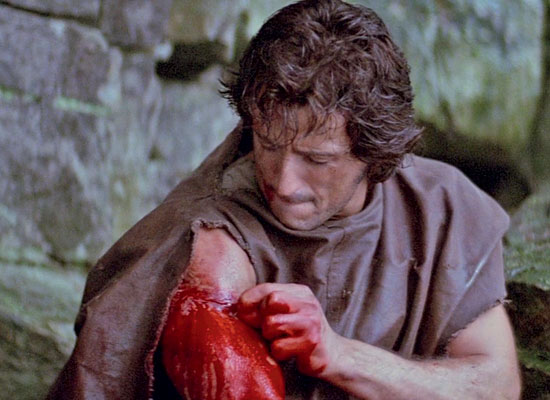 When providing first aid always needs some dressing. When he was not at hand, have to use a handkerchief, piece of clothing; but if you find a place to store the gun, the, It can be a sterile package fit into your pocket. The car kit is required. The house is desirable to have a first aid kit is not worse, than a car. The most essential thing in haemorrhage - blood-substituting solutions, sold in pharmacies without a prescription with the apparatus intravenous injection.

Do not forget, that some advice is available by telephone during emergency call. Better, if by the time you call for an ambulance to be properly defined and wound condition of the victim. Remember, it is not uncommon, when the victim could not be saved because, that on the basis of posts to call an ambulance, operator sent to the scene of another doctor profile.

In some cases, independent delivery of the victim to the hospital rather (faster). City hospitals are on duty at a time. Address duty hospital, please call an ambulance. Manager can alert the hospital emergency room, where you intend to deliver the wounded, on the nature of injury to the, medical staff to prepare for the reception of the victim.

On the one inhabitant of the planet on statistics necessary to half a Kalashnikov, considering that the store 30 rounds, this would be enough, to how you lead farshmak lard, so if you are on one form of blood and faints, If a finger pinched, the old blow it, as in childhood, it is better to forget about the military field surgery.

However, if you are not the timid, here we tell you how to remove the bullet after bullet wound (alternatively pull projectile fragment) and pro rules, which should correspond to an improvised operating, if you really were in the military field, and the hospital is no longer, because he had just been bombed.

Do not rush immediately to pull the foreign object from the body, It may hurt a major blood vessel, and after extracting the object opens strongest bleeding.

Do not forget, it is impossible to stop the blood flow to the injured limb more than 2 o'clock, after give at least minutes 15 to restore normal operation of the blood flow, then you can re-apply a tourniquet (in the case of dangerous arterial bleeding).

Provide the wounded warm and give his body a position, in which the hands and feet will be located above the level of the body.

If gunshot or shrapnel wounds located in the chest area, there is a possibility pnevmogemotoraksa, what happens if the blood and the air will get into the pleural cavity, located in the chest. Avoid this by bandaging the wound using an airtight bandage (amiss and plain cloth, covered with a layer of petroleum jelly),
a piece of polyethylene or if there is nothing at hand- just holding his hand.

You need to get close to the artery clamp the wound with your fingers and quickly zatamponirovat with sterile bandage. And remember, the first time you have seconds 10 from strength.

Conduct successful operation in the military field conditions can only certified surgeon, and in the extreme situation the person, somehow familiar anatomy, to pulling the bullet passing not immobilize the limb, accidentally severing a tendon, or touch an important vessel. Everyone else is necessary to do so, to sterilize instruments and provide the most comfortable conditions for the surgeon and the patient at the time of surgery.

The most effective tools for carrying out the operation in the military field- knife and tweezers.

All you need to sterilize, including a gauze bandage or respirator surgeon, metal in alcohol and to hold the fire, temper steel, then again up alcohol before the operation. Sterile apron and carefully washed and soaked in alcohol hand, if not sterile rubber gloves. 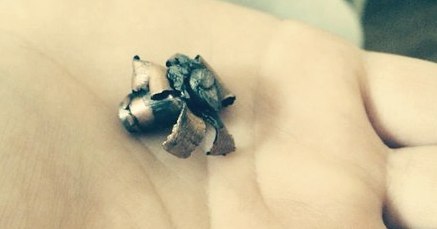 How to pull the bullet

Before removing the bullet, see whether it went right through him. remove the bullet (the Shard) you need as soon as possible, otherwise it will slowly poison the body due to metal oxidation products. Exceptions are such serious injuries, hurt when vital organs, brain or spinal cord, or is likely, that the wounded during the operation can die from blood loss. This is again in case, if the aid will not soon and complied with all the rules of operating in conditions of military field surgery.

If wounded in the mind, it is necessary to give anesthesia as alcohol and squeeze between the teeth that a, to himself, did not cause harm to teeth and tongue. Pull very hard one bullet, Blood is constantly poured into the wound, not giving a good look at the situation. It is best to take to her “team” assistant, which will suck the blood of such interfering previously sterilized enema, not even speaking about, that the responsibility for carrying out such an operation will also share with him. Remember, it poured gunshot wound blood is thus, VERY quickly remove the bullet hurt.

The patient breathes, the bullet went into a souvenir, but as soon as the wound has been brought a huge number of microbes. Can be disinfected with alcohol, and can be more extreme- pour the powder into the wound and set on fire. The method is good even to those, that stops the bleeding, but it is likely to come to fester, especially if the wound is deep.