"Our little, but we vests!» 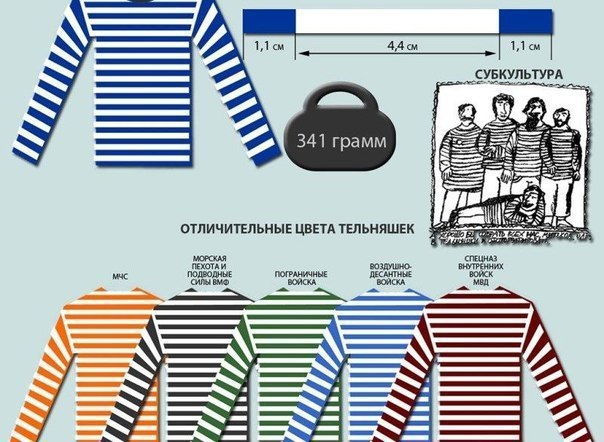 Telnyk, which is inextricably linked to the fleet, in fact there is not so long ago. Order on the introduction of a new form signed 19 August 1874 The Grand Duke Konstantin Nikolaevich Romanov. This day is considered the birthday of Russian vest.

Wearing vests revolutionary sailors of the Civil War soldiers and Marines in World vest made very popular as a romantic symbol of the sea, marine service, courage and boldness.

it seems, if it has always existed, so we are used to the vest. In fact, this comfortable and unpretentious-looking clothes has a history. Vest appeared in the heyday of sailing ships and had a very practical study - vest bands were clearly visible against white sails. However, in early 18 century, almost all European fleets have introduced a uniform dress code. The structure forms vest not included, and for wearing "striped shirts," the sailors were punished very severely.

Drinking shirt has changed only in the middle 19 century, when the fashion included Dutch maritime suit. It consisted of a short pea jacket, blue flannel jacket with a deep cut on his chest, vest and flared black trousers (to make it easier to shoot in the water, and even when cleaning on deck trouser leg to the knee roll, tk. squatting to scrub the deck is more convenient and pants are not torn knees and do not wear out).

In the Russian tradition of wearing vests began to form during the time of the abolition of serfdom, in the 1860s. 1867 year - to Kronstadt of foreign campaign returns frigate General Admiral.
It meets personally the Minister of Marine, Grand Duke Konstantin Nikolaevich Romanov, which sees sailors striped sweatshirt:
– Not in form.
-But nice and warm.
-from whence?
– Bought on the island of Malta.

Grand Duke - a man aesthetic, immediately begin to draft the introduction vest on all Russian Navy.

Now it is a pleasure to wear, not only in the Navy, but also in everyday life; not only adults, but children. Today's vest with the former united only by its resemblance and continued popularity.

When creating uniforms for Airborne troops of the USSR Supreme similar to the shape of the Marines vest became part of the form and paratroopers, but the color strips was changed to heavenly light blue. Light green vests got guards. Saving time for military personnel are thin T-shirts, vests, sleeveless.