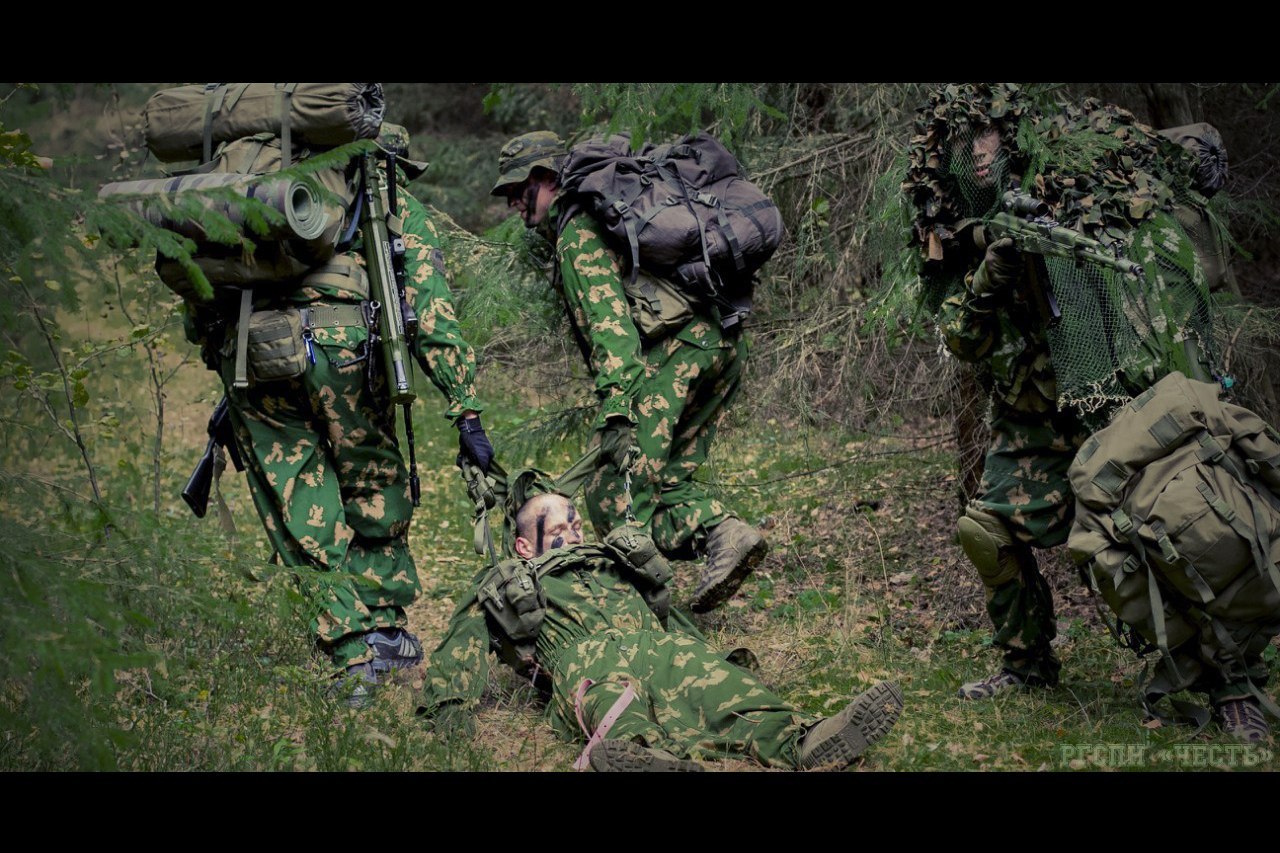 Rule Scout - do not leave wounded in the opponent's territory and as soon as it is possible, deliver it to a location of its troops. But it is not always possible, Furthermore, scouts, because of its specificity activity, very often can not for a certain time to get medical help. And here, to save the life of a fighter, crucial skillfully and timely first aid. This may be used first-aid kit and individual dressing package, which are given to each razvedchiku.Rassmotrim some aspects of the scout, and the most typical injuries and trauma, that may arise as a result of this activity, although we understand, that this division still quite conditionally.

dropping.
Damage to limbs and sustavov.Mogut be very diverse. Among fractures of long bones distinguish cross, slanting, comminuted, closed without damaging the skin and open, accompanied by lacerations. Great importance is attached to, whether there is a shift of rubble, resulting in limb deformation. First aid is to provide a stationary position limb via bus, made of improvised (boards, sticks, brushwood). Under the tire is enclosed wool, moss, etc.). Bleeding time is necessary to stop the pressure bandage or tow, depending on the intensity. When open wound bandage.
Damage pozvonochnika.Sheyny vertebra department – consequence of any sudden tilting the head back, or fall on his head. A sharp pain in the neck, inability to turn the neck to the side may be signs of both fracture, and dislocation of the cervical vertebrae. First aid – lay on his back, can not be put, or raise. When delay hospitalization placed on a rigid bed on his back, under the head and lower back enclose rollers.

Move over rough terrain
dislocations, sprain. Tight bandage is applied and the joint is attached to a fixed position.

The intersection of a water hazard.
salvation drowning. Extract out tongue, previously purified from the slime and algae mouth and nose. Put the victim upside down on his bent knee and push between the shoulder blades until, until the water ceases to flow from the respiratory tract. Then artificial dyhanie.Postradavshego placed on a hard surface on the back of his head with an open back. Begin artificial respiration mouth to mouth or mouth to nose. If the mouth is closed due to muscle contraction, You need to press your fingers on the mandible. Care should be taken, whatever the victim's head was thrown back, and the neck was in the unbent position. If CPR POP in the mouth, should compress the nostrils of the nose, that the air would not come out through the nasal passages. Accordingly, if the nose, clamp mouth. Rhythm 12 -16 every man minutu.Vtoroy (or one at a time saver) It is doing chest compressions to the rhythm 60 – 70 compressions on the sternum in a minute (5 – 6 compressions alternating with injection vozduha.Esli appeared even a little hope, that revitalization measures are effective, we need to continue rescue breathing and chest compressions for a long time – until, until an independent continuous breathing.

surveillance.
chilblain. If slight - pound body to redness wool or soft cloth (but no snow). Then wipe with alcohol and lubricate zhirom.Tyazholoe frostbite. The gradual thaw frostbitten parts. Rub the body to be very careful. Give frostbitten limbs upright (for the outflow of blood), imposing a pre-warming bandage. Writing affected hot drink or goryachitelny.

The clash with the enemy.
Ranenie.Osmotret wound. The greatest danger - arterial bleeding. It is necessary to firmly press your fingers to the bone artery, and raising the injured limb, impose on it a tourniquet above the wound site (using, eg, his belt) or a pressure bandage (can of towels, pieces of tissue etc.). Moreover, the wiring can not be imposed on the naked body, and to put under it the bandage, a piece of cloth, etc.).
On a normal wound(without touching her hands, without removing foreign objects, no water washing) impose a sterile bandage. Bintuemaya part of the body must be fixed.

At Exit Wounds, on the inlet overlaps one of the pads of the individual package, the other on the output. Both firmly pribintovyvayutsya.V case of shock from injury to enter the analgesic and give alcohol or vodka.

maxillofacial injuries – facial area, bruises and injured persons are often in conjunction with damage to teeth. Produces large bruises due to well-developed vascular network entity. Injuries to the soft tissues of the face are also characterized by a large bleeding and molasses. Not excluded damage the facial nerve branches, salivary and parotid glands. Urgent Care – compressive bandage , over which it is desirable to place a bubble of cold water in summer or winter ice.

For fractures of the upper and lower jaw to provide first aid should first clean the mouth of the victim from the bone fragments, blood, mucus, if necessary, fix language (tk. perhaps the tongue and the wounded could suffocate).