WHAT IS bullets with displaced center of gravity ? 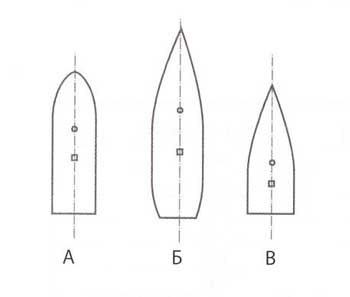 types of bullets: A – blunt, B – genital heavy, AT – spiky light. The squares represent the center of gravity, mugs – windage center.

The answer to the question of the existence of bullets with an offset center of gravity is not in doubt. These bullets do exist, and for a long time. Their story began in 1903-1905 gg., when instead of the previous blunt rifle bullets into service peaked two types have been taken: heavy - for firing at long distances and easy - to fire at close range. These bullets differed improved aerodynamics compared to blunt-ended. They equipped the armies of the leading countries in the world in virtually the same time, and in Germany, USA, Turkey and Russia light bullets were first taken, and in England, France and Japan - heavy. light bullets, in addition to the improved aerodynamics, We had a number of other advantages. Smaller bullet weight, Given the huge amounts of manufactured ammunition, gave a considerable saving of metal. Also increased wearable ammunition arrow. Light bullet had greater initial velocity (on - compared to blunt 100-200 m / s), which together with its improved ballistics increased blank range. The experience of fighting late XIX - early XX centuries. showed, that range to 300-400 m are the limit for aimed fire medium trained fighters. The introduction of light bullets possible to increase the effectiveness of the impact of fire on the specified ranges, at the same preparation of shooters. The advantages of heavy bullets at close range are redundant. They were necessary only to conduct long-range machine-gun and rifle fire. The experience of the practical application of light pointed bullet revealed a not very pleasant they feature. The fire was fought by them from rifles, designed to fire bullets blunt-ended. Trunks such rifles have sloping rifling, which it was sufficient to stabilize the blunt bullets, but the light bullets, released from them, is unstable in flight because of the insufficient rotation speed. This reduces the accuracy and penetration of light bullets, increased by the action of demolition crosswind. In order to stabilize the bullet in flight, the center of gravity began to artificially transfer back, closer to the bottom. To this end, the nose of the bullet specially facilitated, putting to some easy stuff: aluminum, or cotton fiber of the molded mass. But the Japanese did in the most rational. They made bullets with a shell, thickened in front of. Thus solved two problems at once: the bullet's center of gravity shifted back, since the proportion of the shell material less, than that of lead; simultaneously due to thickening of the shell increased penetration bullet. These were the first bullet with the displaced center of gravity. As you can see, the bullet's center of gravity displacement is not done for its chaotic motion if it enters the body, a, conversely, for better stabilization. According to eyewitnesses, such bullets in contact with the tissues allowed enough neat wound.

NATURE OF INJURIES bullets with an offset center of gravity

So what caused the rumors about the terrible wounds, inflicted by bullets with an offset center of gravity? And as far as they correspond to reality? The wound channel a bullet from an M-193 the first time, it is unclear extensive (relatively small caliber bullet) injured were seen with respect to the cartridge .280 Ross caliber 7 mm. However, the reason for their, It turned out, had a large initial velocity of the bullet - about 980 m / s. When a bullet hit the body of the fabric at high speed, located around the wound channel, They found themselves in the area of ​​water hammer. This led to the destruction of the surrounding internal organs and even bones. Even more serious injuries were deposited bullets M-193, which were filled with chucks 5,56h45 to the M-16 rifle. these bullets, at an initial rate of about 1000 m / s also have the property of hydrodynamic pin, however, the severity of injuries is due not only to these. When injected into the body so the bullet goes in the soft tissues 10-12 cm, then turns around, collapses and breaks in the region of the annular groove, intended for planting a bullet in the sleeve. Bullet itself continues to move forward already bottomed, formed with a plurality of small fragments when breaking the bullet striking the fabric to a depth 7 cm from the wound channel. In this way, tissue affected by the combined action of the fragments and water hammer. As a result, the holes in the internal organs of bullets, it would seem, such a small caliber, can reach 5-7 cm in diameter. At first it was thought, that the cause of this behavior bullets M-193 was instability in flight due to too shallow grooves barrel rifle M-16 (step - 305 mm). but, when the heavy bullet M855 was developed by a patron 5,56h45, designed for steeper rifling (178 mm), The situation has not changed. The increased speed of rotation allowed to stabilize bullet, but the nature of the wounds remained unchanged. Proceeding from the above, conclusion is, which in itself offset a bullet's center of gravity in this case does not affect the nature of the wounds it inflicted. The severity of the damage is due to the speed of a bullet, and several other factors.

5.45x39 ammunition turns, all, that tell us about the properties of bullets with an offset center of gravity - fiction? not really. Following the adoption of the Soviet Union armies of NATO cartridge 5,56h45 developed its reduced caliber intermediate cartridge - 5.45x39. His bullet had deliberately shifted back center of gravity due to the cavity in the nose. this ammunition, received index 7N6 was "baptism of fire" in Afghanistan. And here revealed, that the nature of the wounds, applied them, very different from the same M-193 and M855. When injected into the tissue Soviet bullet Do not turn tail forward, as a small-caliber bullet American - she began to tumble randomly, repeatedly turning over in the course of the movement in the wound channel. Unlike American bullets, 7H6 is not destroyed, as its robust steel shell withstand hydraulic loads while moving inside the body. Experts believe one of the reasons for the behavior of bullets ammunition 7N6 soft tissue just shifted the center of gravity. When injected into the body of the bullet rotation slows dramatically, and a stabilizing factor ceases to play a role. further tumbling, is, apparently, due process, occurring within the bullet. Part of the lead-Shirt, located closer to the bow, due to sudden braking moves forward, resulting in a further displacement of the center of gravity, and correspondingly, the point of application of force in the course of the bullet movement in the tissues. In addition, it bends himself nose bullets. Given the heterogeneity of tissue structure, we get very complicated wounds, applied such bullets. The most severe damage to tissue 7N6 ammunition bullets occur in the final phase of movement at a depth of 30 cm. Now cases "came up - came to mind". If you look at the wound channel scheme, really, notably some of its curvature. obviously, that the inlet and outlet of the bullet in this case would not strictly conform to each other. But the bullet deviation from a straight ammunition 7N6 begins only at a depth of 7 See contact with the fabric. A curve path only noticeable when long wound channel, at the same time with the boundary Hit inflicted damage are minimal. In theory, Considering bullet munition increased tendency to bounce messages 7N6, it is also possible abrupt change in its trajectory when hit into the bone at a tangent. But, of course, once in the leg, this bullet still will not work, for example, from the head. To do this, she will not have enough energy. When firing in a ballistic gelatin fixedly bullet penetration depth is not more than half a meter.

The wound channel a bullet 5.45x39 ammunition is believed, and the characteristic of the military, I shoot a lot in practice, about an increased tendency to bounce messages bullets with a displaced center of gravity. The examples ricocheting from twigs, of water and the windowpane results when acute angles or multiple reflections bullet when fired in a confined space with stone walls. However, an offset center of gravity does not play any role. First of all, there is a common pattern - the least prone to heavy blunt ricochet bullets.

clear, bullets 5.45x39 ammunition to those not relevant. At the same time, with sharp corners meet impetus, transmitted barrier can be very small, insufficient for its destruction. There are cases ricocheting water even lead shot, which any displaced center of gravity, for obvious reasons can not have. As for the reflections from the walls of the room, really, the bullet from the cartridge M193 exposed him to a lesser extent, than bullets ammunition 7N6. But this should be attributed only to the account of lower mechanical strength of American bullets. When meeting with an obstacle, they are simply more deformed and lose energy.

Proceeding from the above, Several conclusions. At first, bullet with a displaced center of gravity really exists, which are not some kind of secret or forbidden type of ammunition. These are standard bullets Soviet ammunition 5.45x39. Stories about some special room in their "rolling ball" and the like, are no more, than fiction. Secondly, displacement of the center of gravity back have been made to increase the stability of the flight, and not vice versa, as many people think.

Correct to say, that shifted the center of gravity - is the common property of all small-caliber high-speed bullet pointed, stemming from their design. Thirdly, applied to bullets cartridge 7N6, the displacement of the center of gravity does affect the behavior of bullets in the tissues. In this case, the bullet starts to randomly tumble, and its trajectory with the deepening of tissue deviates from a straight line. Such bullets behavior significantly increases the traumatic effect in the defeat unarmored living purposes. However, any type of miracles “I hit in the shoulder, I went through the heel” and there can be no. This is a side effect of the high-speed small-caliber bullets hard shell, and not specifically laid characteristics. The role of the offset center of gravity in applying such bullets complex atypical wounds and ricocheting elevated too high public opinion. 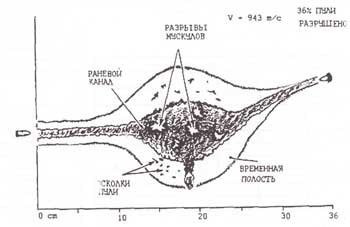 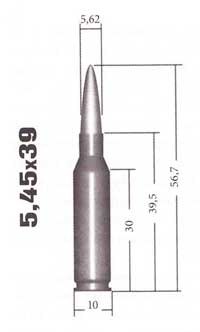 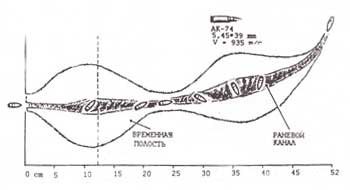