Evacuation of the wounded from the battlefield

practice shows, that the inability to properly bring the wounded out of the fire cost the lives of many soldiers. Consider two basic ways to evacuate the wounded: dragging in the supine position (under fire) and carrying on his shoulder (quiet environment, or low density of the fire).

1. Dragging supine begins with, that wounded weapon is thrown over his shoulder so, so that it is at the right drag and drop. The wounded man laid back on the bent left leg drags the head in the direction of travel. If the wound allows, the drag gesture puts his gun handle bolt up to the wounded chest.

Hold the gun with his right hand, grasping for the wounded left hand strap, pushing the right and left legs partially, drag gesture makes the leap over the body in the direction of evacuation, dragging a wounded. In this case, drag gesture should remain face to the enemy, holding a loaded gun with his right hand, ready for use. Then, bending both legs, repeats the above movement. Dragging is done in the supine position until, until you have the opportunity to exercise portability wounded on the shoulder.

2. Carrying the wounded man on the shoulder starts with a wounded lifting and placing it on his lap. In this case, evacuating the wounded faces the squat or focusing on one knee. Wounded, delivered on his knees, It is held in a vertical position, due to pressing evacuates it to yourself. Then evacuating grasping the strap, jerk throws wounded on his left shoulder and stands, holding an injured left hand on the leg. In this case, the right hand – on weapons, ready to use.

3. In the presence of cape easier to evacuate the wounded under fire, the following method. Angle cape, forming hood, fastened by a simple semi-attachments. The wounded man laid on his back near the head node, feet to the opposite corner. angles, located on the right and left of the wounded, tightened on his chest right node. Further, drag gesture lies near the wound to the head in the direction of evacuation. wounded weapon is behind draggable. their weapons, take off the gloves, He puts on a wounded (permitting injury), or her right, while the belt weapons slung over the neck to drag and drop.

Bent leg is put under the feet of the wounded, second leg, bent at the knee, It rests on the heel into the ground. Both of your hands around the corner cape, drag gesture movement bent leg lifts and wounded at the same time, rebounding bent at the knee off the ground leg, It makes his whole body jerk, dragging a wounded. Next described motion repeats. 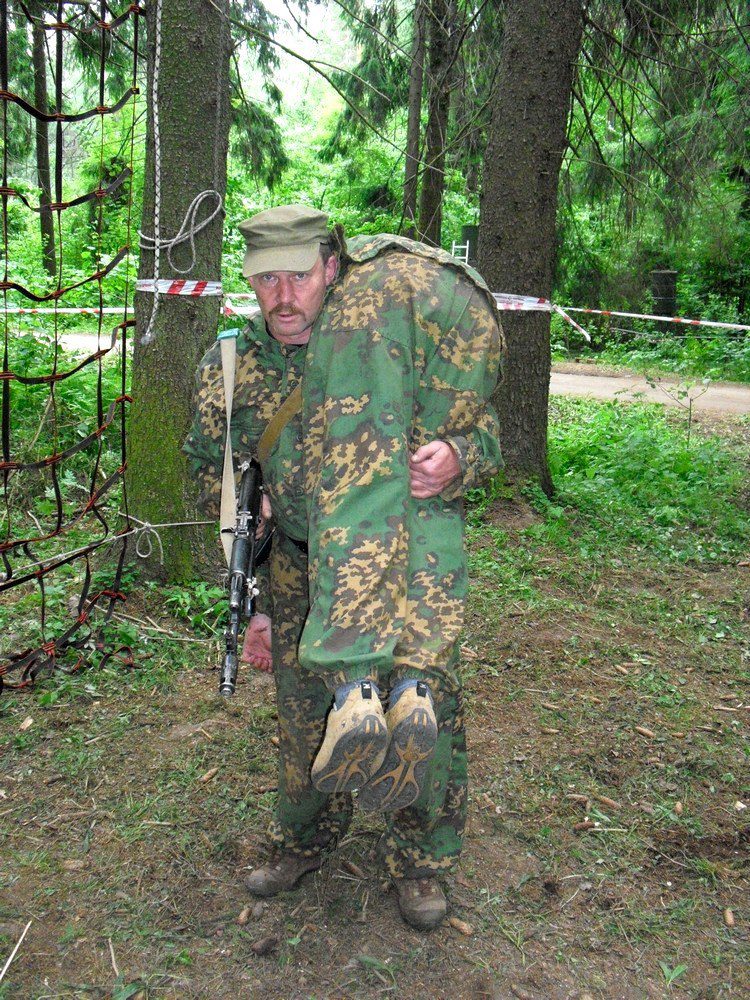 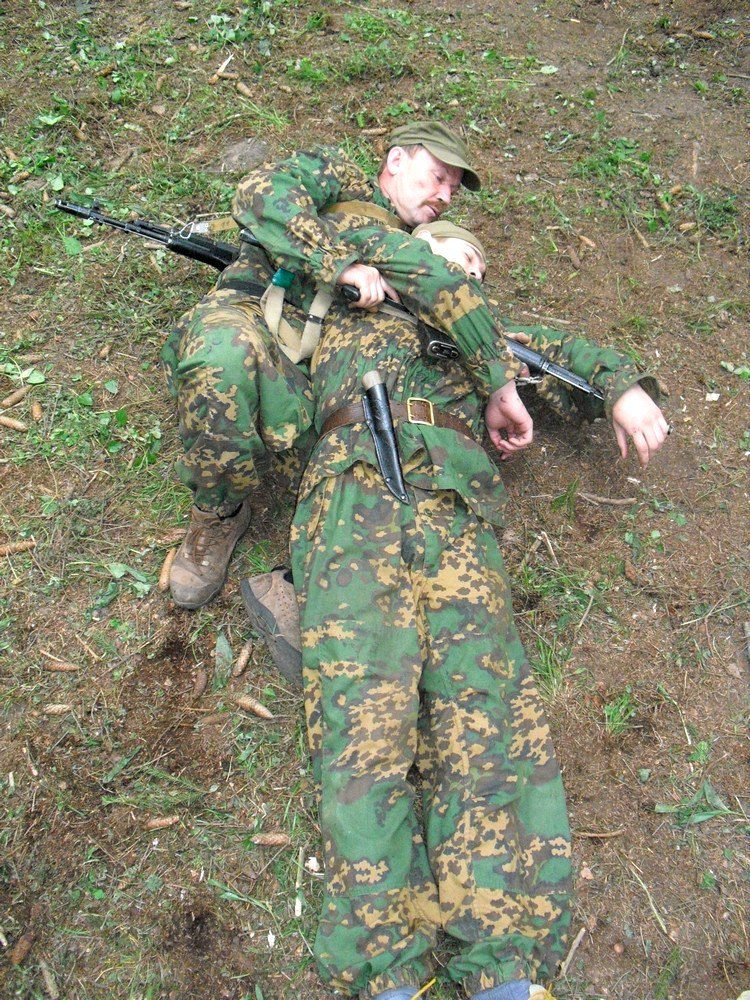 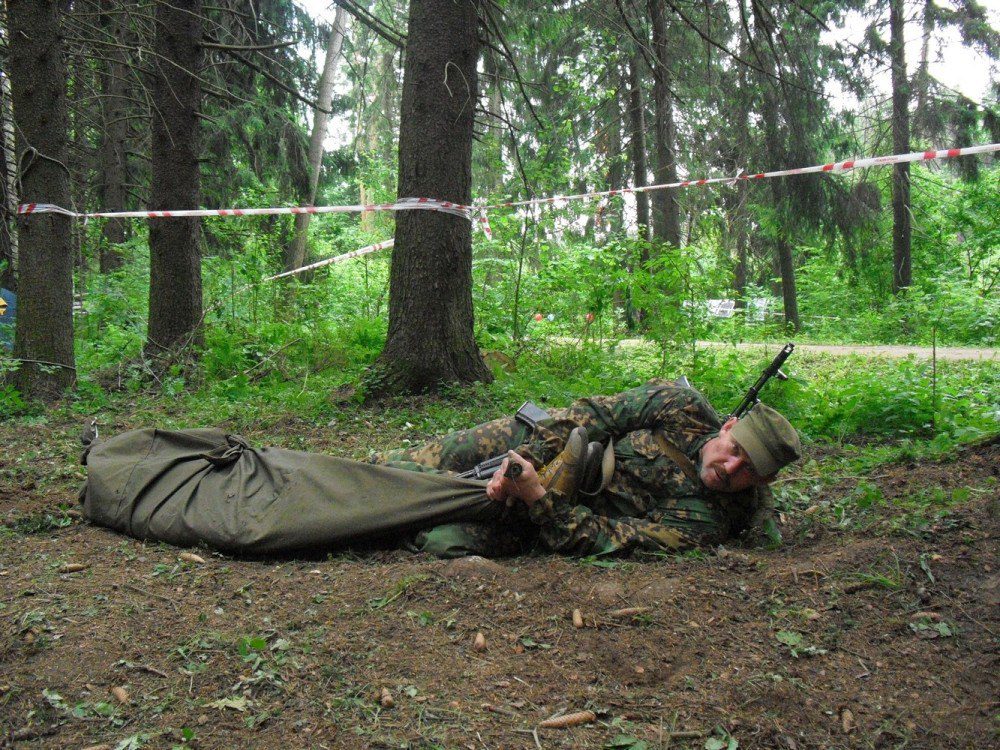 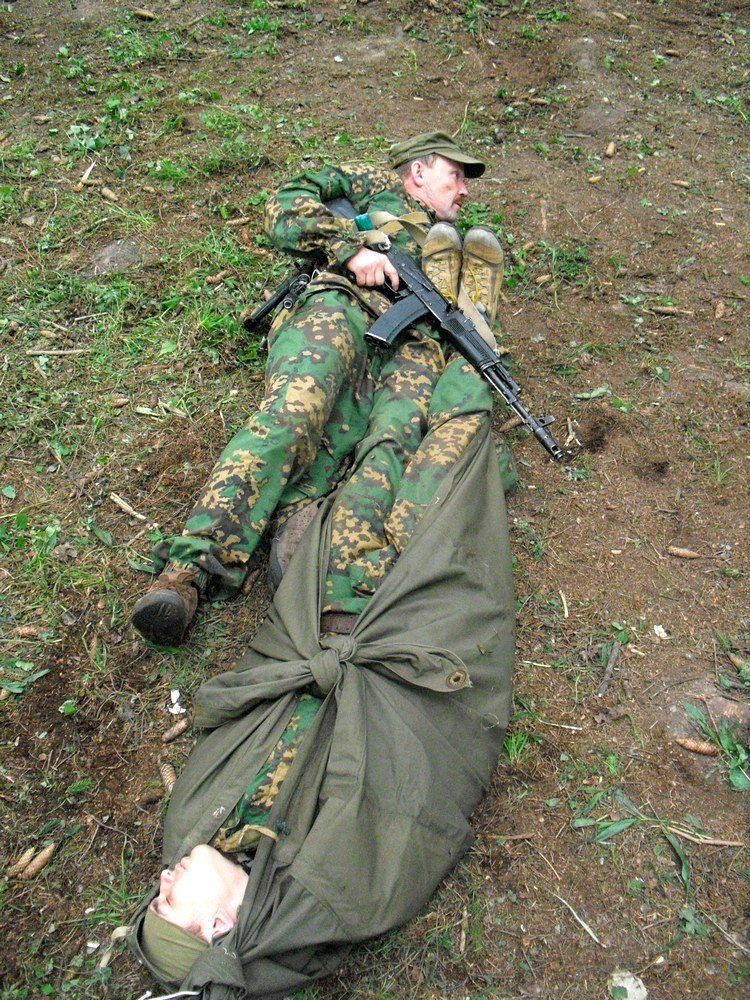 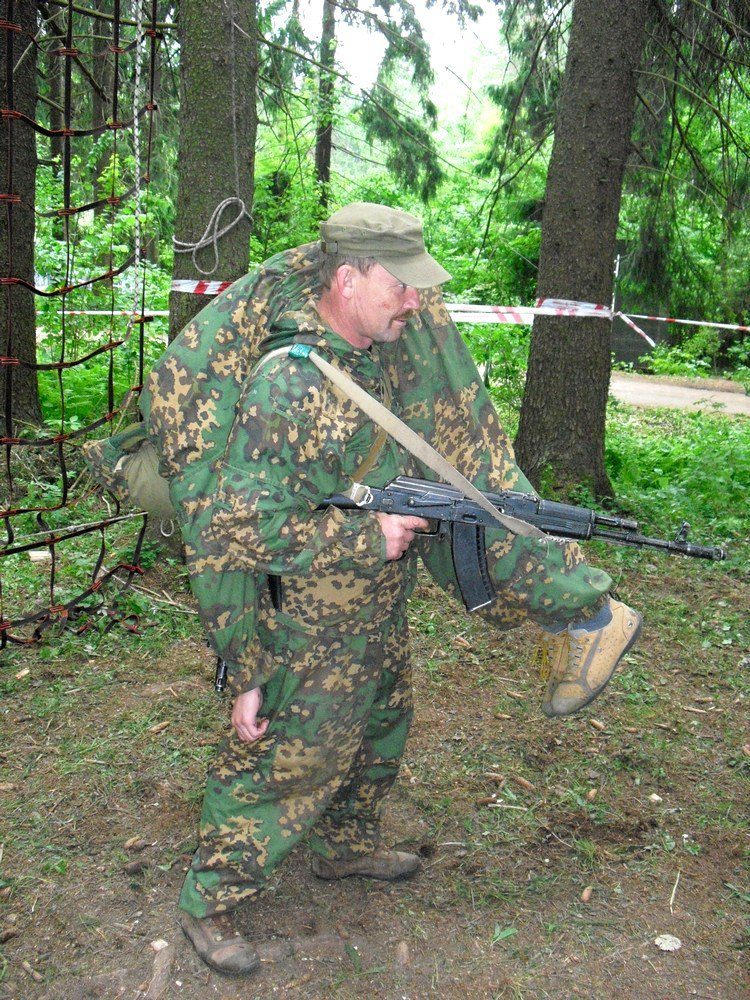 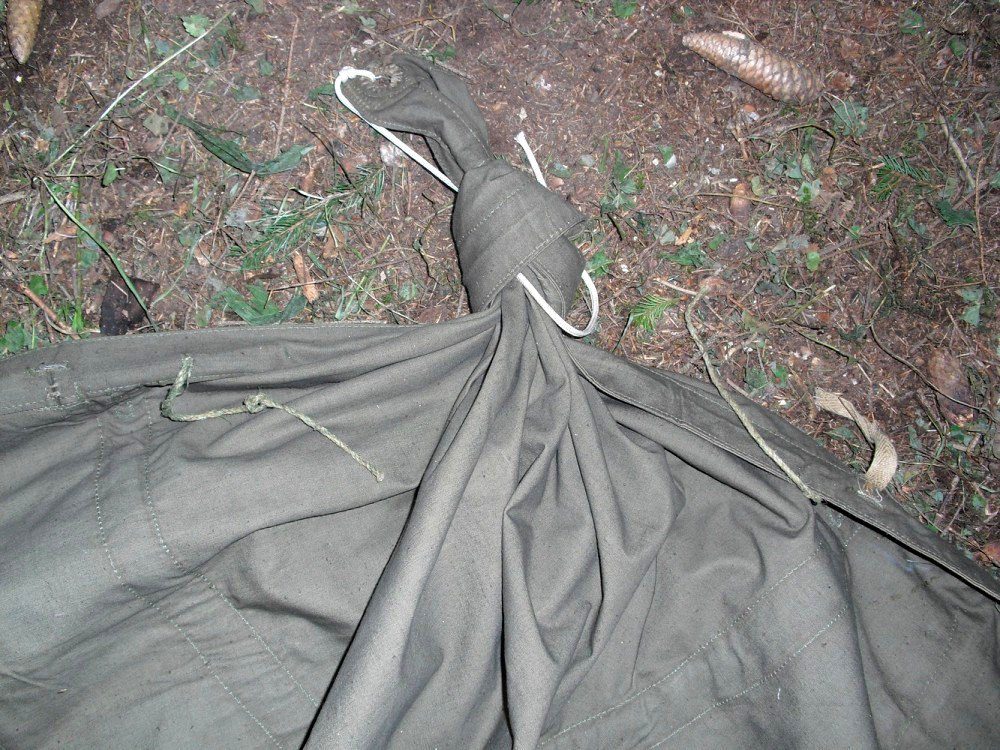 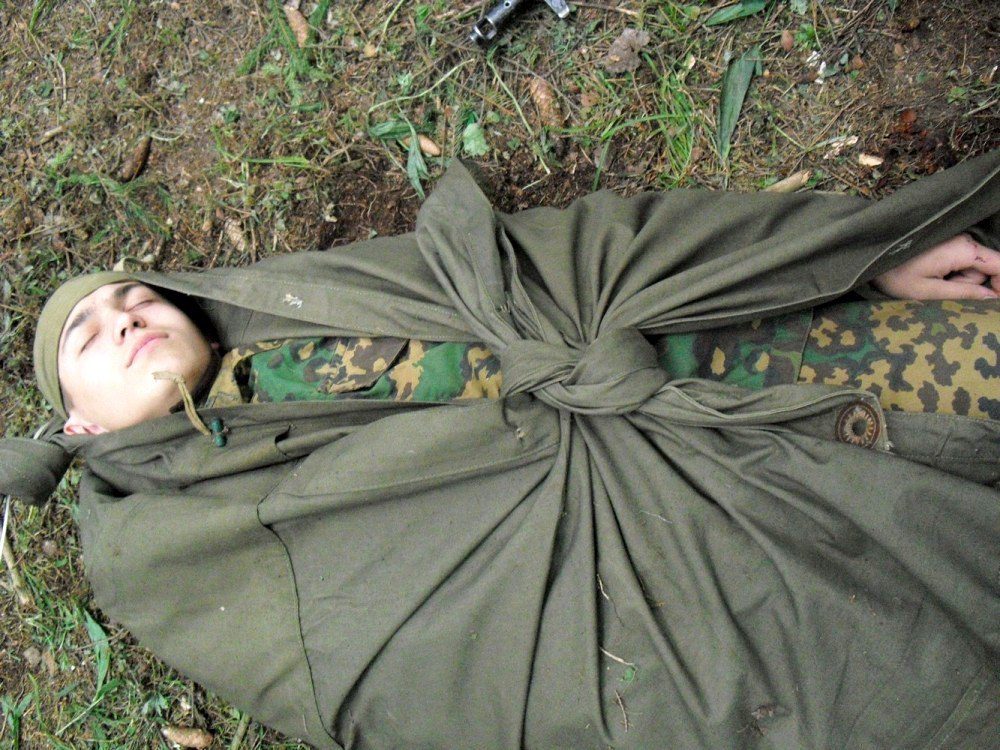 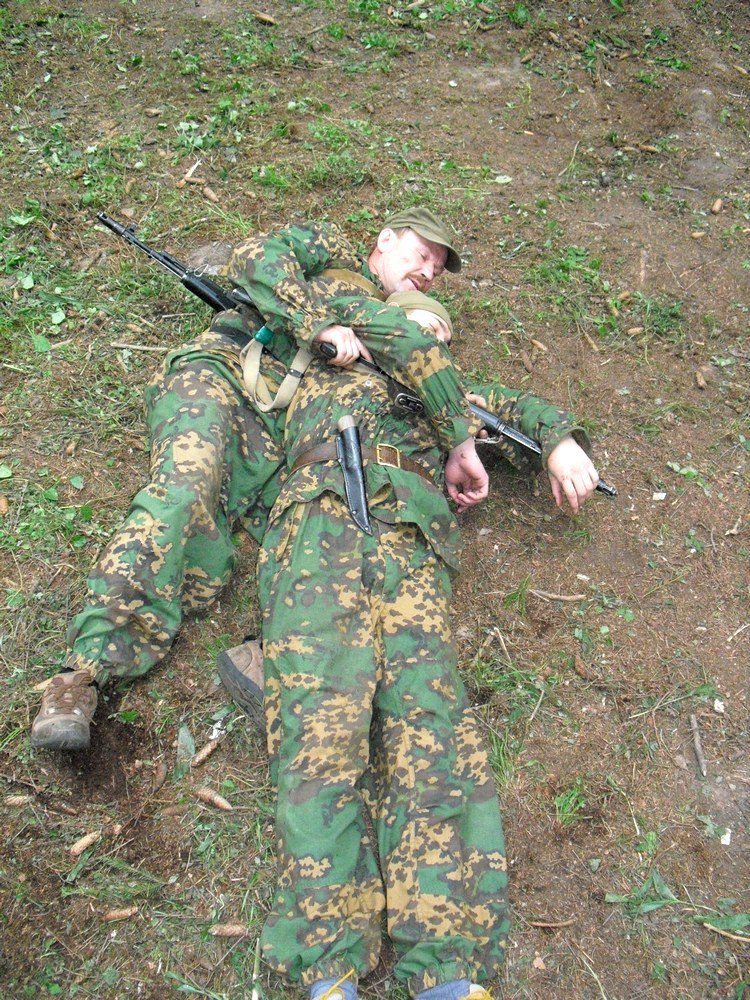